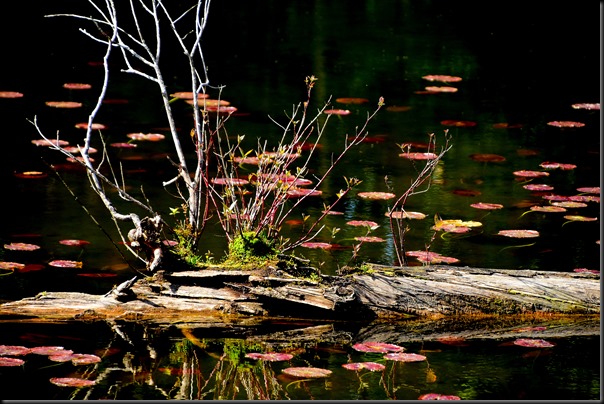 Our chilly overnight temperatures here along the Ontario shores of eastern Lake Huron dropped to a shivering 36F.  No problem for us here snugly warm in our house but oh those poor long week-end tent campers at the nearby Pinery and Point Farms Provincial Parks.  I remember those cold nights from many years ago when we would head off early in the season to the Pinery on week-end camping jaunts.  Oh those long ago memories of much younger days:)) 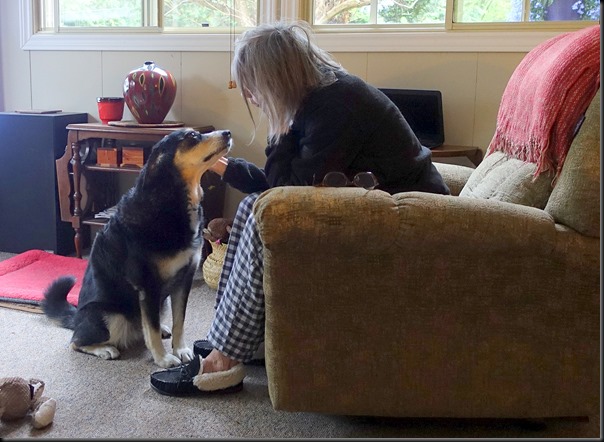 ‘MOM, DAD WON’T GET OUT OF HIS CHAIR AND TAKE ME FOR A JEEP RIDE’ 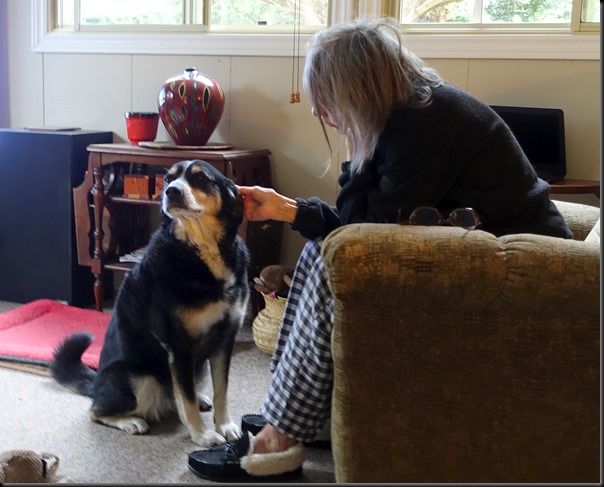 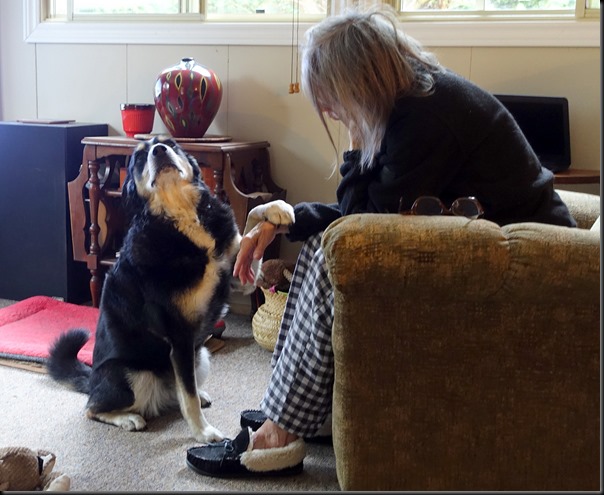 ‘OH MOM HE’S NOT LISTENING, WILL YOU PLEASE TELL HIM ONE MORE TIME’

How nice to see the makings of a fiery sunrise through our tall pine trees first thing this morning.  Always an encouraging way to start the day.  Most mornings the Sun like a magnate draws me out of the house towards it and wraps me in it's warm comforting glow. 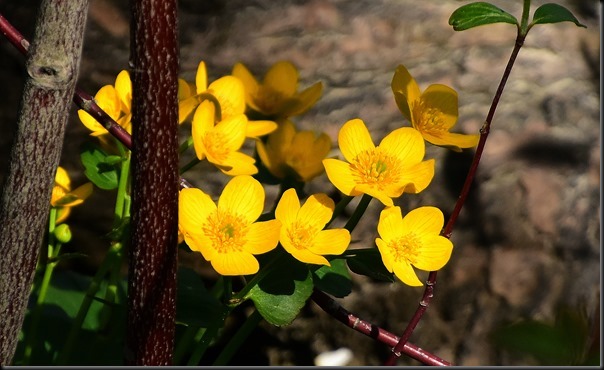 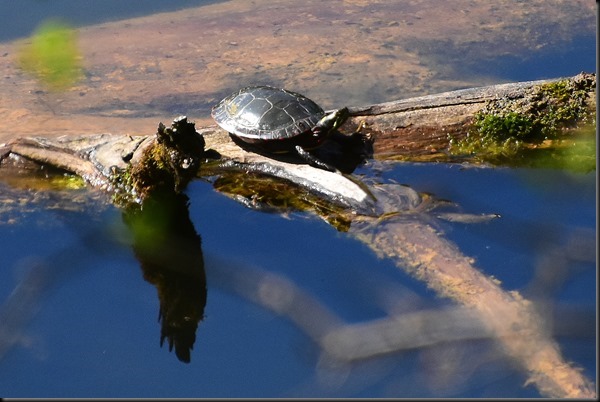 EVEN SOME TURTLES OUT SUNNING THEMSELVES ON AN OLD LOG 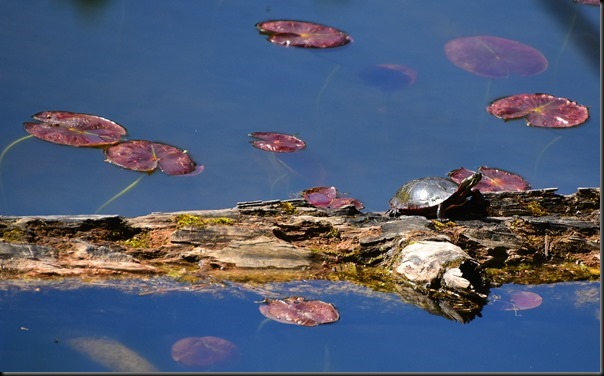 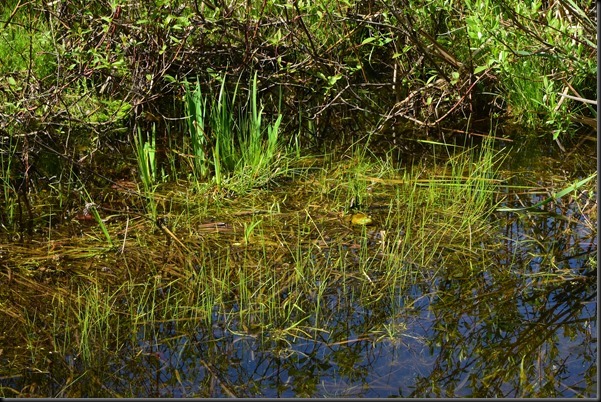 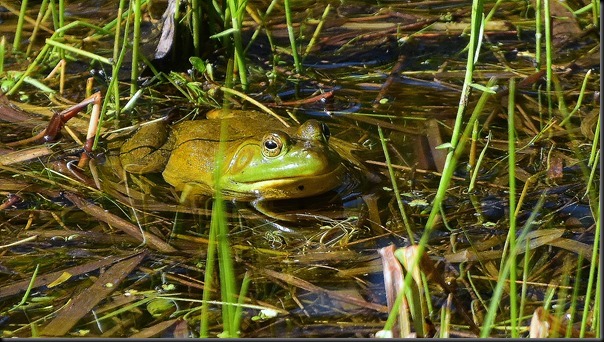 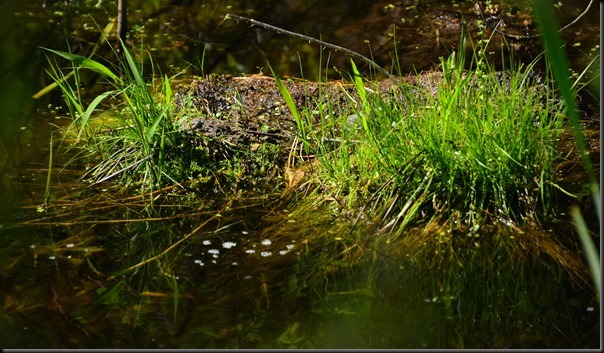 ONE END OF THIS POND IS VERY SWAMPY 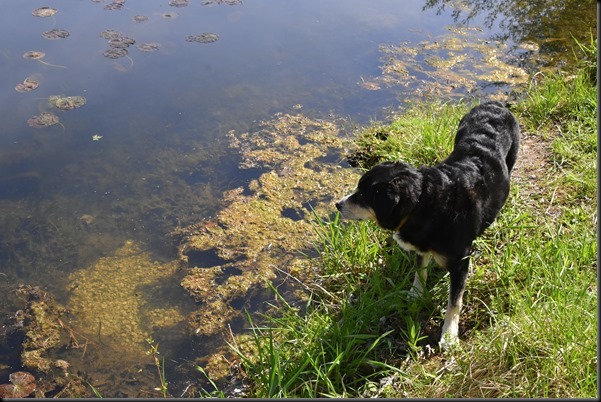 PHEEBS SPOTS A FISH IN THE WATER 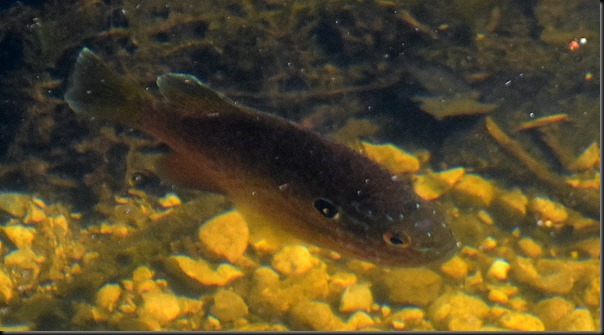 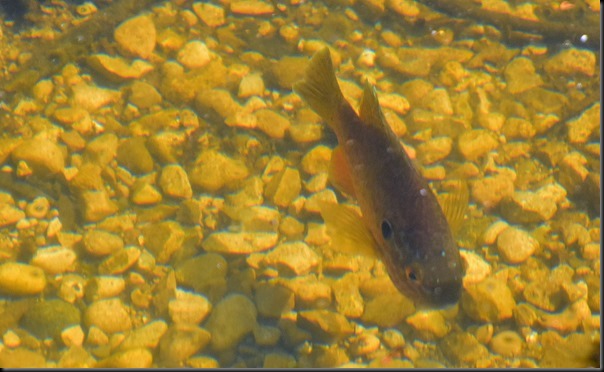 I don't know why I always let my hair get so long but I do.  This morning it was 'chop the mop' time as Kelly once again deftly maneuvered a pair of garden shears through my mane.  As hair piled up on the kitchen floor I tried to remember the last time I had to pay for a haircut and I think it was sometime in the Spring of 1993 just before meeting Kelly for the very first time in the summer of that same year.  I have no idea what a commercial haircut would cost these days but I'm sure the price would align itself with every thing else and be very expensive. 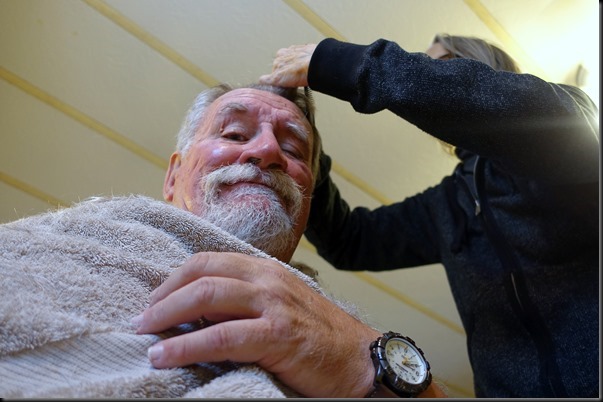 Needing to arm myself with a proper wax applicator for the Motorhome waxing project Pheebs and I headed back to Goderich this morning for a stop at the Canadian Tire Store and luckily they had a Simoniz pack of 3 applicators in stock.  Of course not wanting to rush right home again on such a beautiful sunny Spring morning we rolled out of Goderich heading east into the countryside stopping alongside a couple favorite ponds.  Snapped a few photos and then headed for home.  I was kinda wanting to get on with the rig’s waxing job before our day warmed up too much. 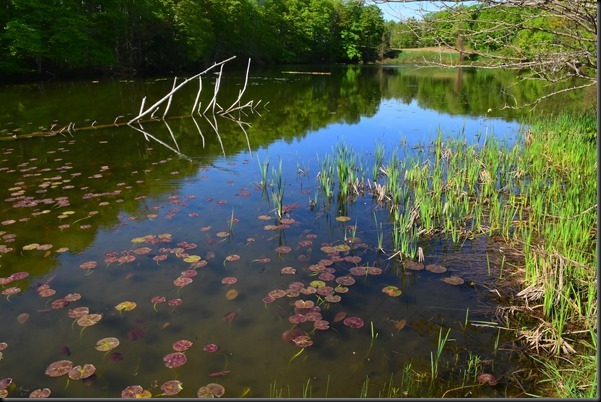 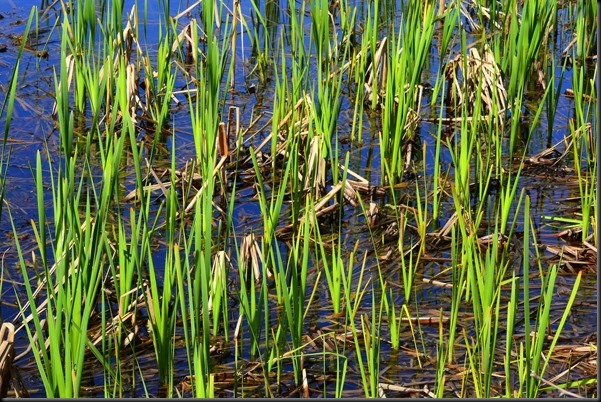 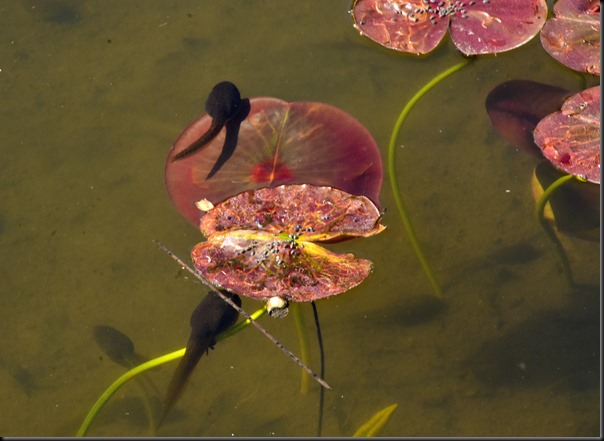 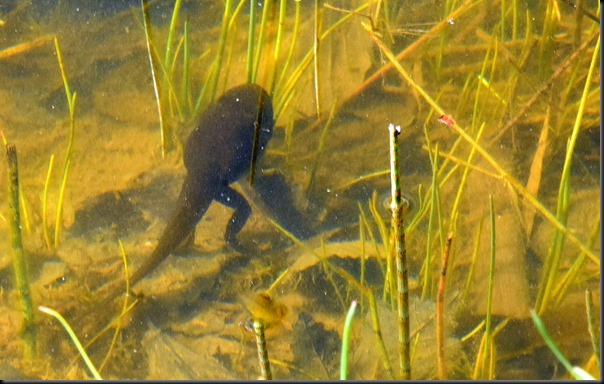 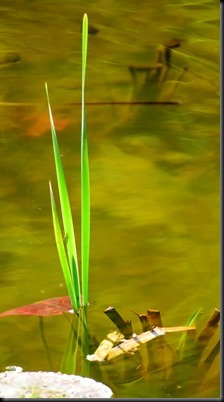 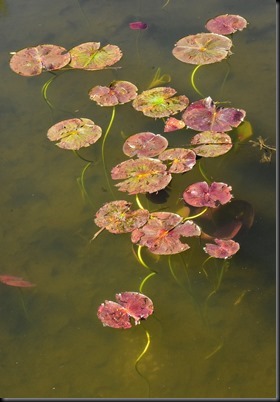 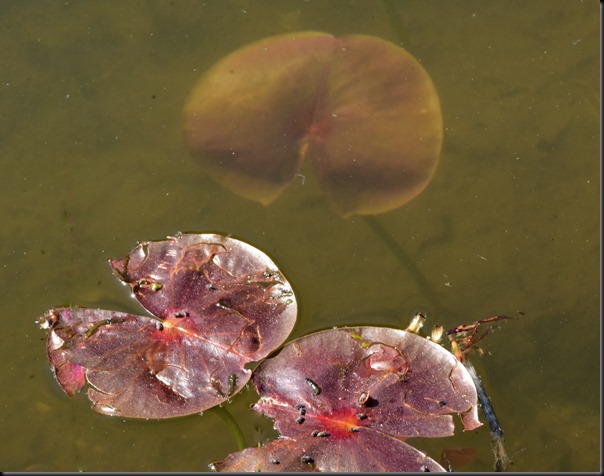 LILY PADS GROWING ON AND JUST BELOW THE POND’S SURFACE 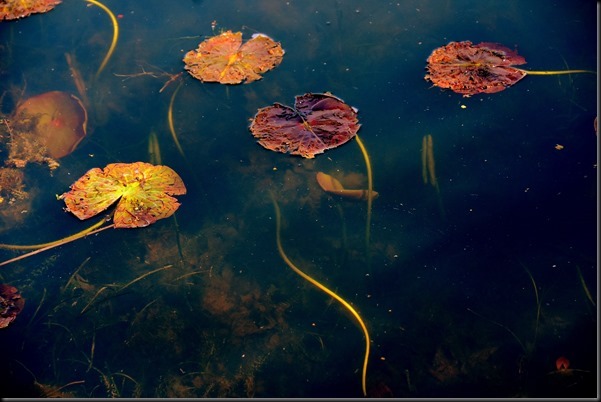 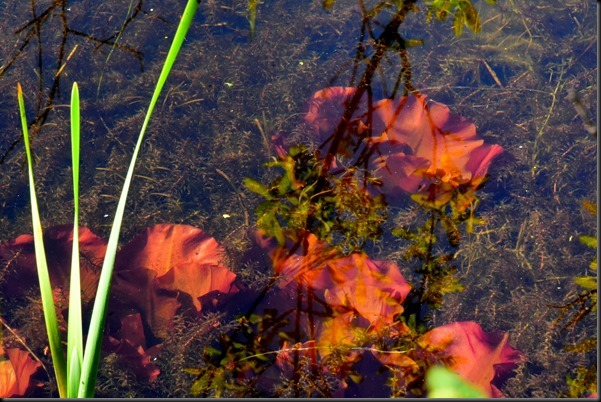 Trying out one of the three round Simoniz wax applicators I was very pleased to see how much better it worked at applying the wax uniformly and smoothly to the Motorhomes white fiberglass side.  I basically redid about 80% of what I had already done on that side of the coach.  By 1 o'clock after a couple dozen trips up and down our 12 foot ladder my legs gave out and I had to come in and sit down for awhile.  I did come to one conclusion today though.  Once I finish this Motorhome wax job that will be it.  I will never do it again and would not attempt to hand wax something that large in the future.  That is a job I would leave to the professionals.  And I still have over half the coach to do yet. 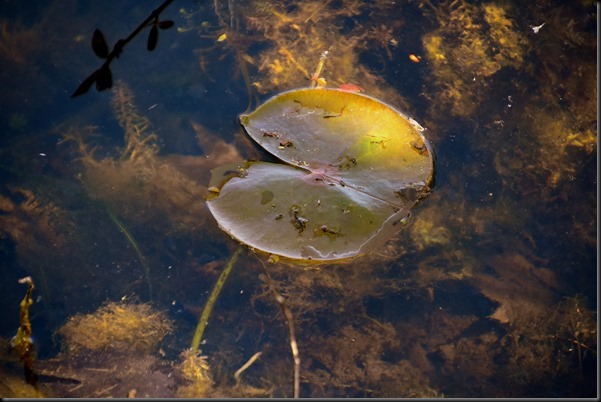 AN EMPTY CLAM SHELL FLOATS JUST UNDER THE POND’S SURFACE

GROANER'S CORNER:((  A policeman was interrogating 3 blonde guys who were training to become detectives. To test their skills in recognizing a suspect, he shows the first blonde guy a picture for 5 seconds and then hides it. "This is your suspect, how would you recognize him?" The first blonde guy answers, "That's easy, we'll catch him fast because he only has one eye!"  The policeman says, "Well...uh...that's because the picture I showed is his side profile." Slightly flustered by this ridiculous response, he flashes the picture for 5 seconds at the second blonde guy and asks him, "This is your suspect, how would you recognize him?"  The second blonde guy smiles, flips his hair and says, "Ha! He'd be too easy to catch because he only has one ear!" The policeman angrily responds, "What's the matter with you two??  Of course only one eye and one ear are showing because it's a picture of his side profile! Is that the best answer you can come up with?"  Extremely frustrated at this point, he shows the picture to the third blonde guy and in a very testy voice asks, "This is your suspect, how would you recognize him? He quickly adds, "Think hard before giving me a stupid answer."  The blonde guy looks at the picture intently for a moment and says, "The suspect wears contact lenses."  The policeman is surprised and speechless because he really doesn't know himself if the suspect wears contacts or not. "Well, that's an interesting answer. Wait here for a few minutes while I check his file and I'll get back to you on that." He leaves the room and goes to his office, checks the suspect's file in his computer, and comes back with a beaming smile on his face. "Wow! I can't believe it. It's TRUE! The suspect does in fact wear contact lenses. Good work! How were you able to make such an astute observation?" "That's easy," the blonde guy replied. "He can't wear regular glasses because he only has one eye and one ear."

The child comes home from his first day at school.  His Mother asks, "Well, what did you learn today?"  The kid replies, "Not enough. They want me to come back tomorrow."