‘YAHOUIE LOUIE’….. AFTER 21 HOURS WE FINALLY HAVE OUR POWER BACK ON 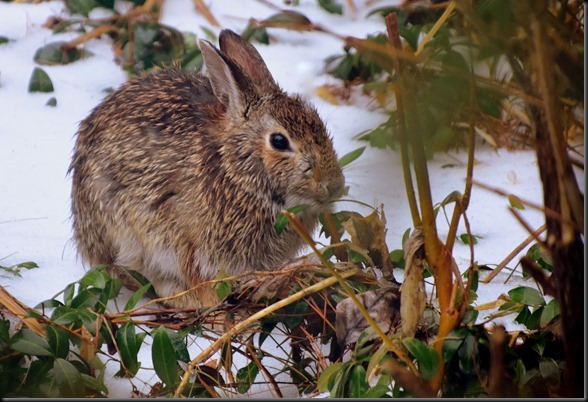 Awoke at our usual early morning time but there was a difference today.  Our power was still not on!!  Luckily with temps hovering around the freezing mark outside we were not cold inside.  Cool yes but not cold.  Kelly slipped out to the Motorhome and fired up our propane stove to heat water for coffee.  Still lots of water  available in our rain barrel for flushing the toilet or heating water for washing. 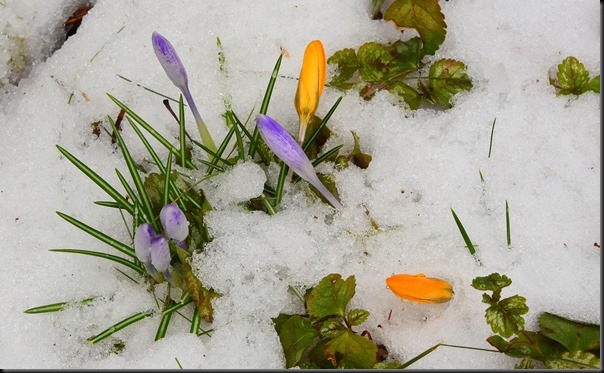 OUR CROCUS FLOWERS ARE NOT HAPPY CAMPERS

Noticed several of our neighbors heading out in their vehicles no doubt with heaters going on their way to local coffee shops and restaurants for breakfast.  We weren’t far behind them.   Heavy snowfall coming straight down which meant our big winds had finally subsided.  Armed with A&W breakfast coupons we made our way along snowy roads straight to Goderich.

HEADING FOR GODERICH’S A&W THIS MORNING 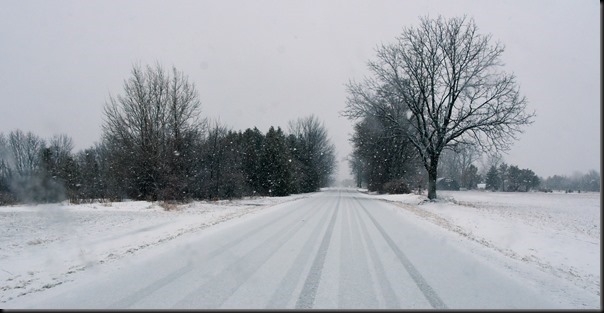 YES I HAD CHRISTMAS CAROLS ROLLING AROUND IN MY HEAD AGAIN

With bacon and eggs safely tucked away in our tummies it was over to Walmart and Canadian Tire for a few things.  With dozens of storm stuck birds we were cleaned right out of birdseed so I grabbed us another 40 pound bag of seeds.  I think we’re gonna have to get a birdseed bank loan just to keep all the area bird’s fed. 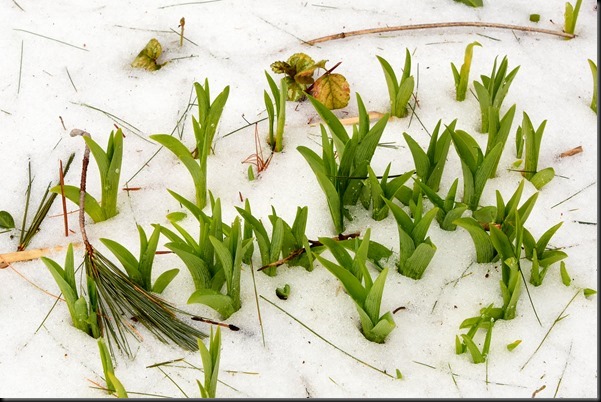 OUR SPRING FLOWERS ARE TRYING THEIR DARNDEST TO GET GOING 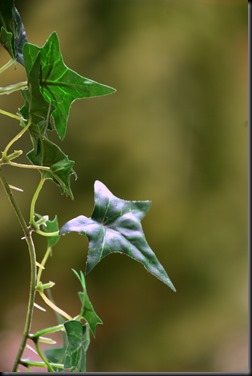 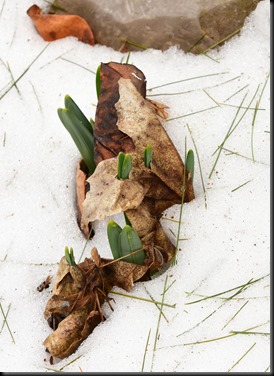 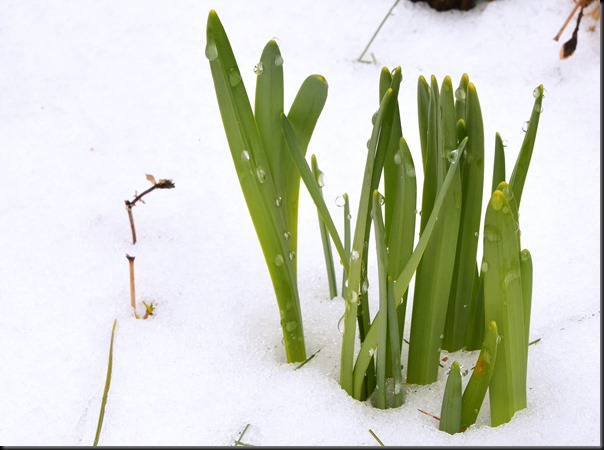 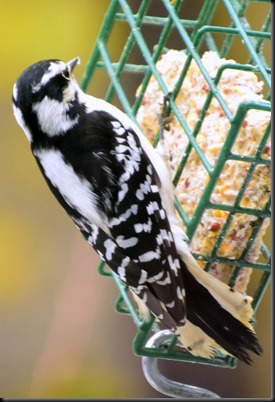 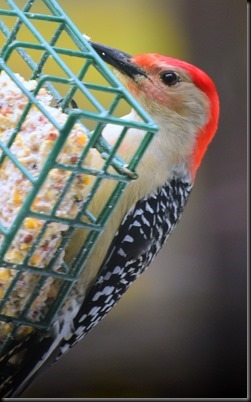 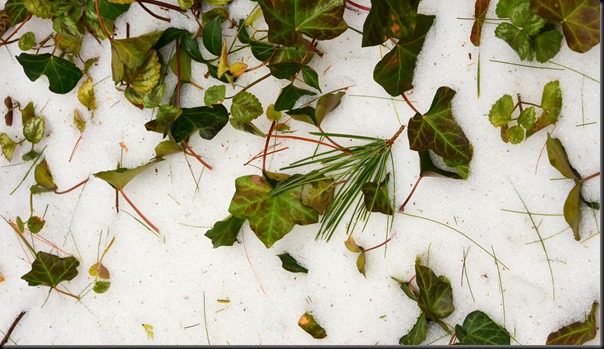 ENGLISH IVY STRETCHING ACROSS THE SNOW

Back home I began putting some extension cords together after Richard suggested bringing some power into our house using our Motorhomes generator and 4 solar batteries.  We did that and were able to get our computers up and running which enabled me to publish Monday’s post around noon today. 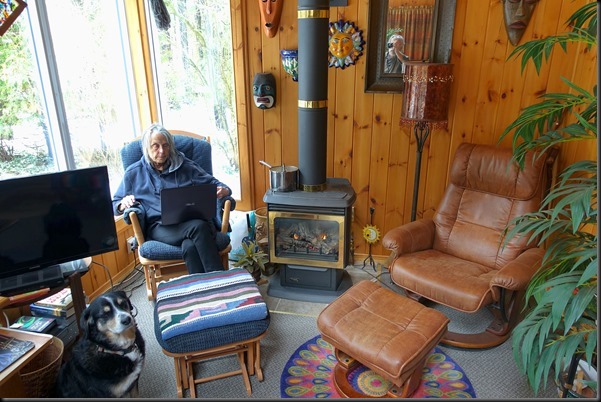 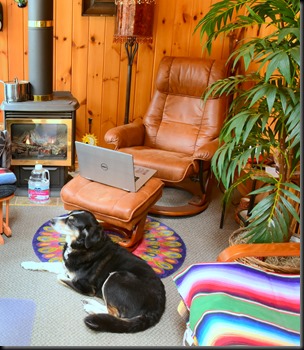 Kelly always phones the power company whenever we lose electricity so we are on their robo-call updates and while at A&W her cell phone rang and it was an auto call saying power was not likely to be on until 11 p.m. Monday.  The auto call before that one this morning had said power would be on at 1 p.m. today.  So knowing we would have no power until later Tuesday night we just hung around the house all day.  Wasn’t much else we could do.  Fired up my laptop for music knowing I could easily keep it charged up by slipping out to the Motorhome and plugging it in there.  Sure is handy having an RV with an onboard generator parked outside and with our solar storage batteries we do not have to leave the generator running all the time.  Nice:)) 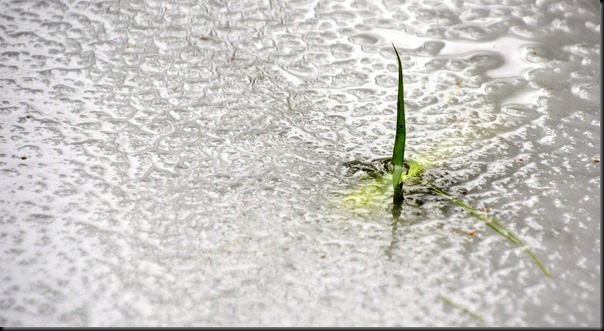 Imagine our surprise and sighs of relief when at 4 p.m. this afternoon our power came back on after being off for 21 hours.  Last time we had checked a few hours before the electric company was still saying 11 p.m. to be restored.  We immediately celebrated with a couple big bowls of hot chicken noodle soup……heated up right on our very own stove.  And if anyone missed my Sunday post you can find it here at Power Outage. 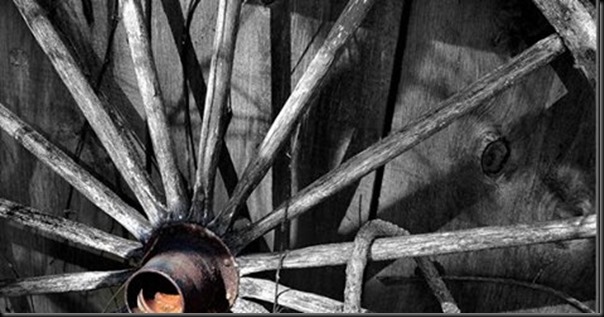 GROANER’S CORNER:((  A drunk guy who smelled like booze sat down on a bench next to a priest.The man's tie was stained, his face was plastered with red lipstick, and a half-empty bottle of gin was sticking out of his torn coat pocket. He opened his newspaper and began reading.
After a few minutes the man turned to the priest and asked,'Say Father, what causes arthritis?'
The priest replies, 'My Son, it's caused by loose living, being with cheap, wicked women, too much alcohol, contempt for your fellow man, sleeping around with prostitutes and lack of a bath.'  The drunk muttered in response, 'Well, I'll be damned,'then returned to his paper.  The priest, thinking about what he had said, nudged the man and apologized. 'I'm very sorry.  I didn't mean to come on so strong.  How long have you had arthritis?  The drunk answered, 'I don't have it, Father.  I was just reading here that the Pope does.

An atheist was rowing at the lake, when suddenly the Loch Ness monster attacked and grabbed him from his boat.  He panicked and shouted "God help me!", and suddenly, the monster and everything around him just stopped.  A voice from the heavens boomed "You say you don’t believe in me, but now you are asking for my help?"  The atheist looked up and said: Well, ten seconds ago I didnt believe in the Loch Ness Monster either!