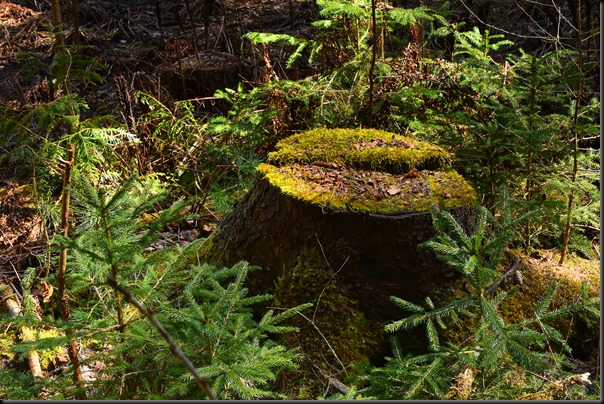 Living here in a pine forest with tall trees all around us I am out of touch with the night sky so missed Sunday night's full Moon.  One of the greatest things for me about the American Southwest each winter has been the crystal clear and unobstructed diamond studded night skies stretching from mountain top to mountain top.  On how I miss those awe inspiring and thought provoking nightly moments under the stars. 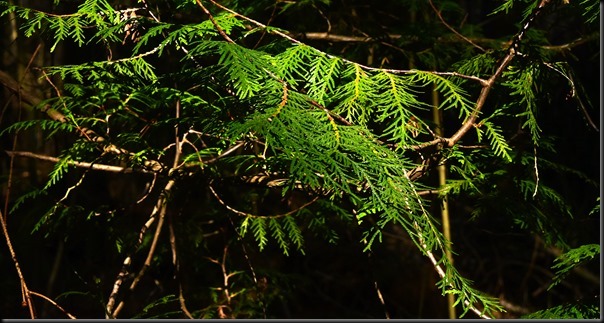 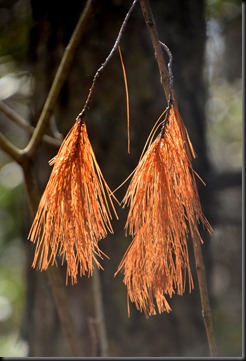 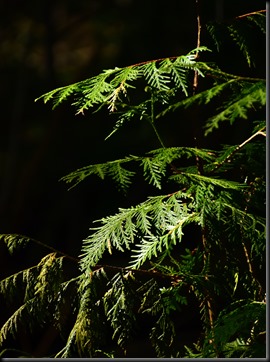 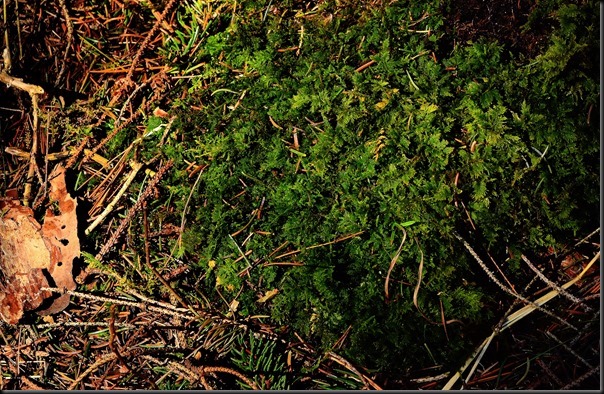 MOSS ON THE FOREST FLOOR
Our thermometer was again below freezing early this morning but we had clear skies and a sunrise.  Warmer Spring weather is due once again to re-start itself today and I'm sure I am only one of several millions of people here in Canada's southern Ontario and neighboring States and Provinces so much looking forward to that.  It has been such a long, cold, and depressingly frustrating Spring to say the least.

WITH THE GROUND DRYING UP FARMERS WERE OUT WORKING THE LAND TODAY
With a cheerier outlook tucked under my hat Pheebs and I were again off to Goderich for our customary swing down around the harbor. 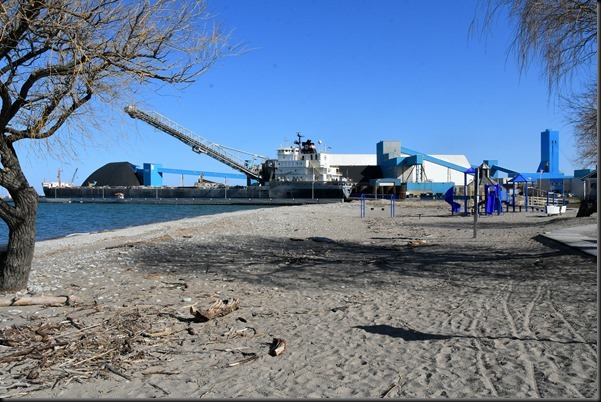 GODERICH’S SIFTO SALT MINE IS THE LARGEST OF IT’S KIND IN THE WORLD AND A FEW DAYS AGO WORKERS WENT ON STRIKE…..COMPANY OWNERS ARE THREATENING TO ‘SHUT IT DOWN’!!
Needing to grab myself more exercise we headed south of Goderich on highway 21 to Naftel's Creek Conservation Area and wasted no time in getting ourselves onto the still muddy trails.  Somewhat limited to where we could walk we did manage to skirt around some watery mud soaked areas and kept going.  Well at least I skirted around but not so much the Pheebs as she just plowed herself right straight through the oozy goop.  Not a soul around and we had the forest to ourselves.  How nice to be out walking in nature again and especially before the bugs become a problem. 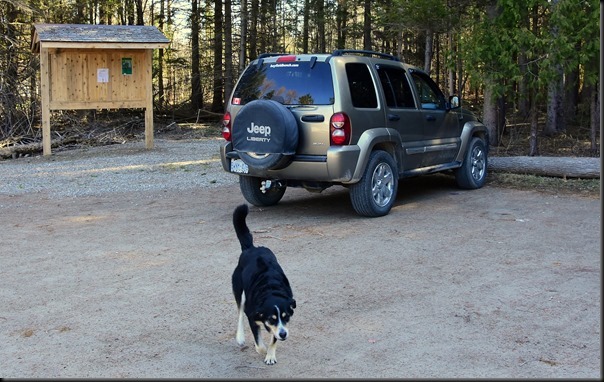 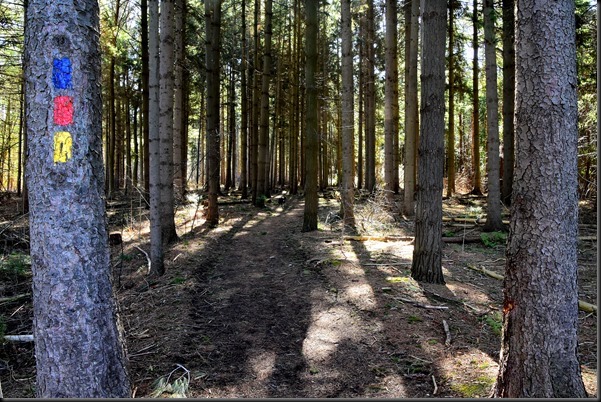 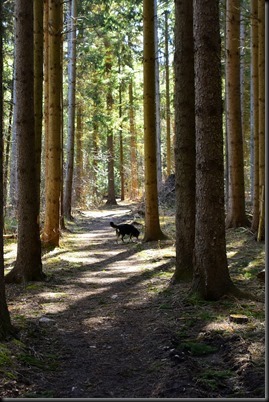 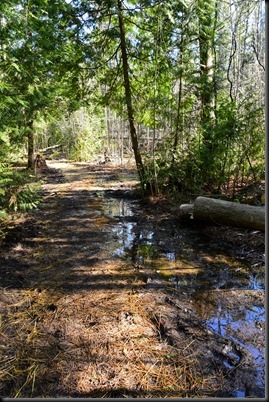 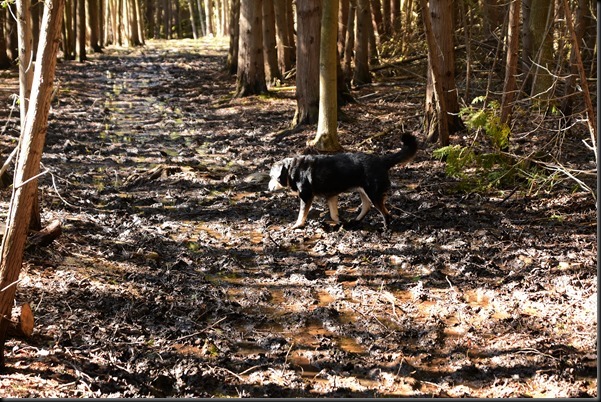 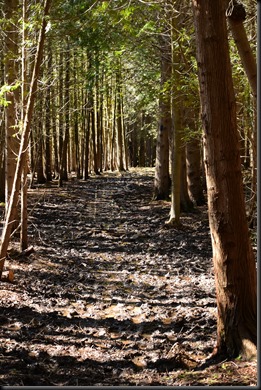 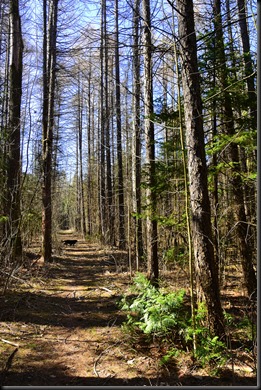 TRAIL ON LEFT IS MUDDY WHILE TRAIL ON RIGHT IS DRY 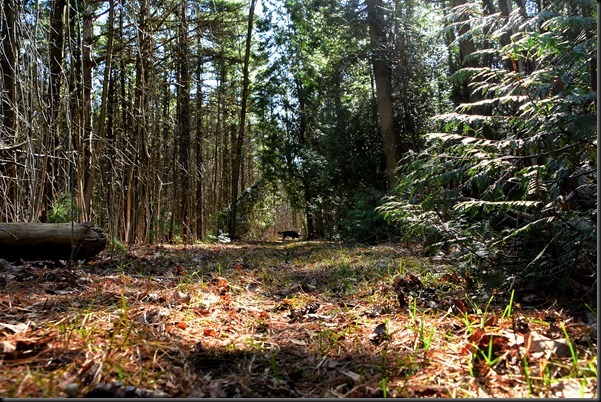 THERE’S A LITTLE PHEEBER BUNS UP THERE SOMEWHERE 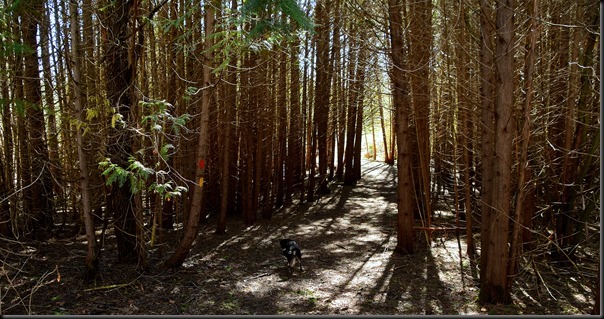 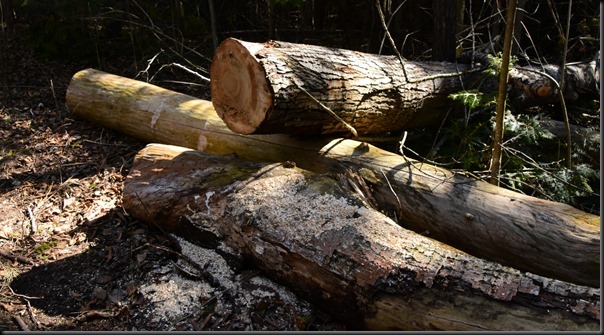 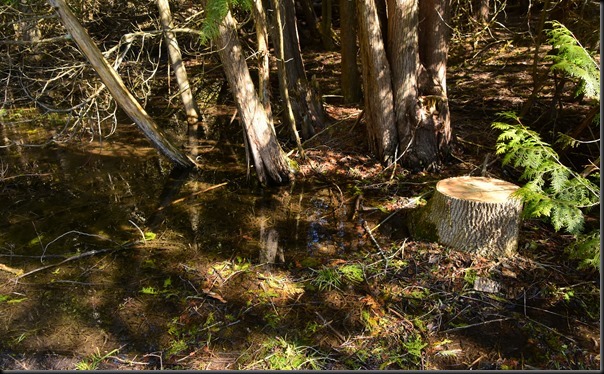 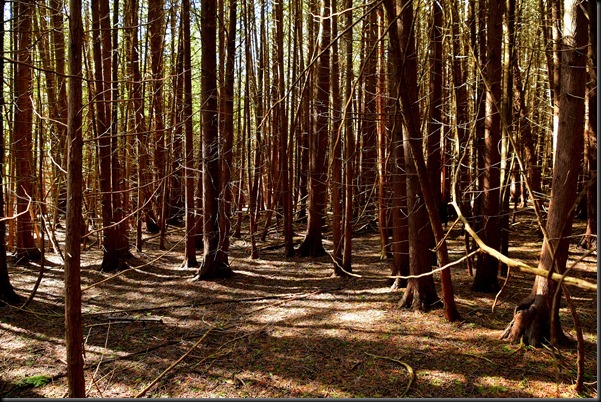 IF ONE WANDERS OFF THE TRAIL ONE CAN EASILY MISPLACE THEMSELVES 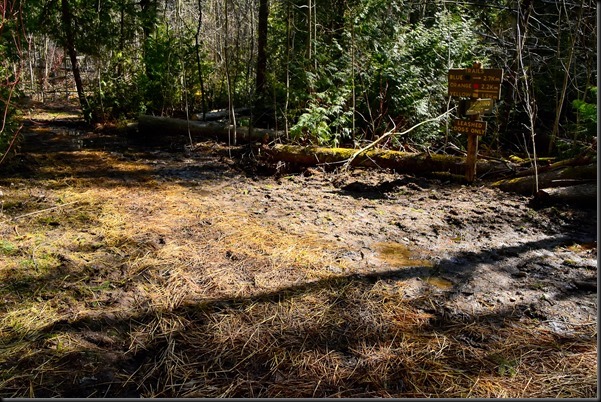 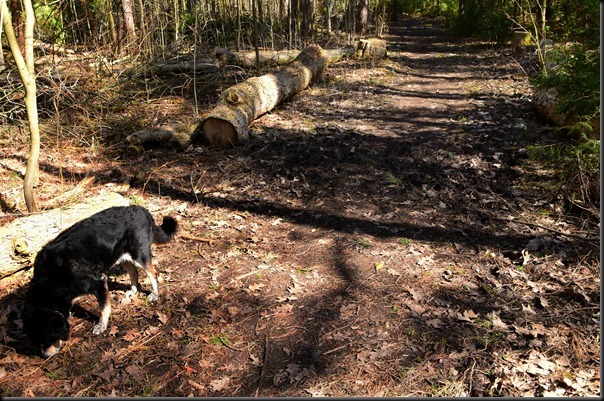 LOTS OF SMELLS ALONG THE TRAIL
We were home before noon and I right away fired up the Motorhome.  With Pheebs on board in the navigator’s seat we headed the Big E out for a much needed run.  Not good to leave a motorized vehicle sitting in one spot all the time and especially a heavy Motorhome.  Not good for the tires.  It was the first time on the road since we had returned from the south nearly 8 weeks ago so we took the rig for a half hour drive down around Clinton way.  Again, it hummed along as smooth and powerful as ever. 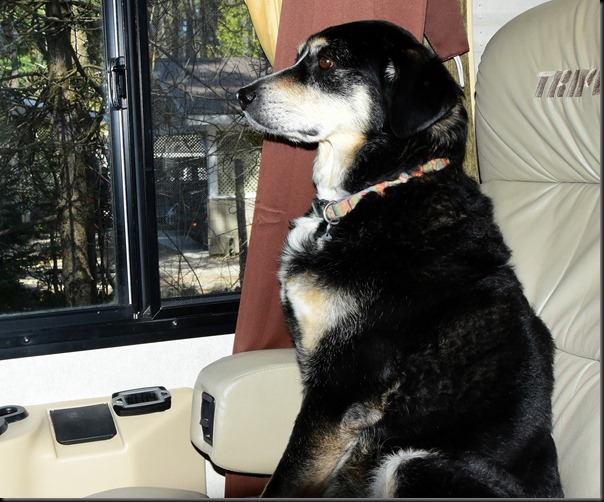 A NICE WARM SUNNY MORNING FOR CRUISING ALONG IN THE MOTORHOME 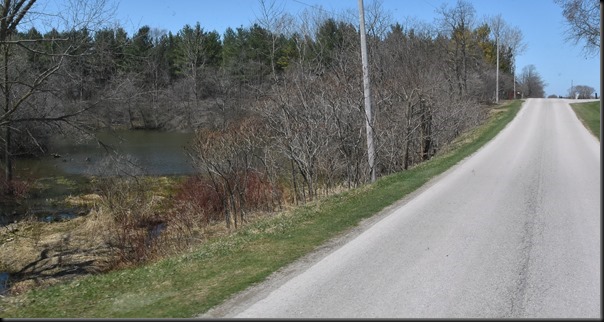 ONLY A MILE FROM HOME
Back home again I set to work de-winterizing the Motorhome.  Usually when we come back from the Southwest sometime in late March the weather isn’t too bad so we’re not in the habit of winterizing it and simply keep it plugged in with the furnace on low.  This year coming home earlier than usual the weather turned nasty with plunging temperatures.  I had no choice but to haul the Motorhome’s manual out and quickly winterize it.  The winterizing went better than expected and the de-winterizing today went not to bad as well.  My usual frustrations of course but that’s normal. 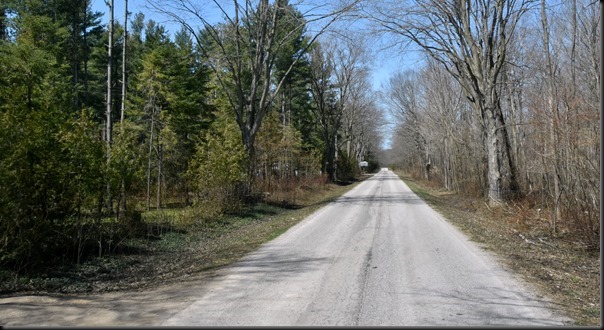 BY GOLLY THAT’S OUR PARK JUST AHEAD THERE ON THE LEFT
Nice afternoon forest walk with the Pheebs and I think our temps got up into the 60’s on a mighty fine sunny Monday afternoon.  Think we are predicted to break the 70’s mark Tuesday.  Nice weather sure goes a long way in making a lot of folks feel better and I am one of those folks.  Three frogs in our front yard pond now.

STILL THE ODD PATCH OF SNOW LEFT ALONG THE NORTH FACING DITCHES
In a blog comment ‘Flowergirl’ asked, “Why don't you just switch to an every other day blog”?  Well actually there are several reasons why.  For me anything older than today is old news and my interest in old news drastically drops right off from day to day.  The other reason of course is my memory and trying to remember what happened yesterday is a real challenge to not only my memory but my patience as well.  Knowing me I would become discouraged with my memory and simply push away from the keyboard and head off in a huff berating myself for not being able to clearly remember what happened the day before.  A daily blog while my mind is still fresh at the end of the day is the only way blogging works for me.  My posts are basically spontaneous each day without a lot of re-writes and over editing and I guess that’s kind of my style.  My photography is much the same.  I am not a perfectionist………………….. 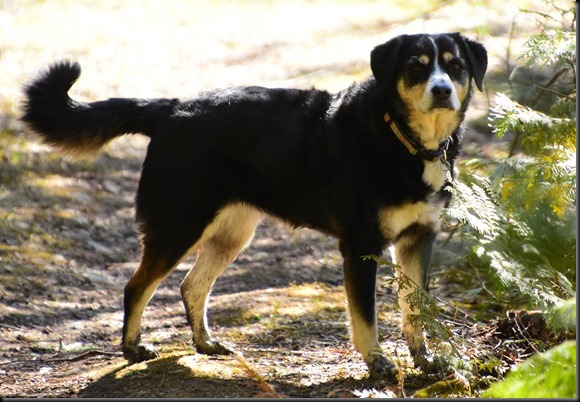 MUDDY PAWS??  WHAT MUDDY PAWS????
Once again a big thank you to those readers who have reached out and helped me push my overturned blogging cart back onto the ascending tracks of this up and down blogging roller coaster of mine.  I really need to learn how to keep the low spots along the tracks clear of my own self inflicted mire and muck. HEY WHO JUST JUMPED INTO THE JEEP WITH MUDDY PAWS!!
GROANER’S CORNER:(( Harry was shipwrecked on a deserted island. For several months, he longed for someone to talk to; searched the horizons for even the suggestion of a ship.  One day, his commitment was rewarded: A beautiful woman was washed up onto the beach, floating on a large steamer trunk. Harry got her all settled, and fed, and dried off and they started talking.  She told him April was her name.  April asked Harry, "what is something you've REALLY missed being out here on a deserted island for so long?"  "A clean shirt," was Harry's response. With a huff, April reached into the steamer trunk and tossed Harry a shirt.  "Surely there's SOMETHING you've really missed out here...all alone...on an island with NOBODY all this time?"  "Oh wow, YEAH, there sure is: I'd REALLY like a dry pillow to sleep on."  April reached into her steamer trunk once again and tossed Harry a pillow; and she would not be put off. Striking her most alluring pose, she asked in her most provocative voice, "C'mon, Harry, wouldn't you like to play around?"  Harry got all excited and started jumping up and down. "Don't tell me you have a set of GOLF CLUBS in there, too?!???!?!"
----------------------------------
- “Why did the watch make a quick trip to the dry cleaners? It was pressed for time!”
- Years ago someone in California hollered “Gold,” and people drove from all directions. That’s the way they still drive in California.
========================