KERRVILLE TX TO BEAUMONT TX AND OH MY WHAT A STRESSFUL DRIVING DAY IT WAS:(( 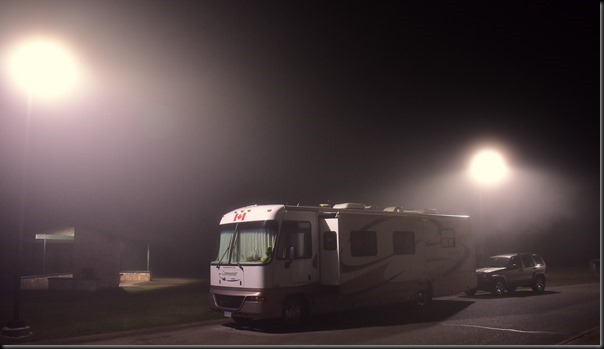 FOG WAS STILL WITH US THIS MORNING

A thickening fog began settled in late Tuesday afternoon around 5 o’clock.  Can definitely feel moisture in the air.  Not to often temperatures come up in the night but it was definitely warmer this morning than last night.  Not a pea souper so off we went about 7:40 a.m. 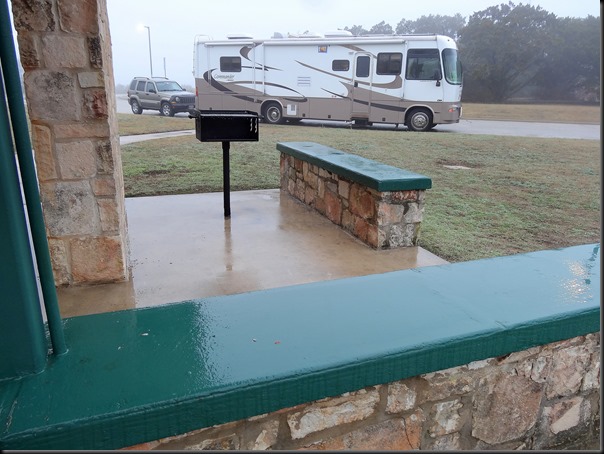 As we rolled out of the Kerrville Rest Area onto I-10 in the drizzly mist the increase in traffic from the past couple days was the difference between night and day.  And that traffic just kept up for most of the morning and and our previously peaceful travels simply deteriorated real quick. 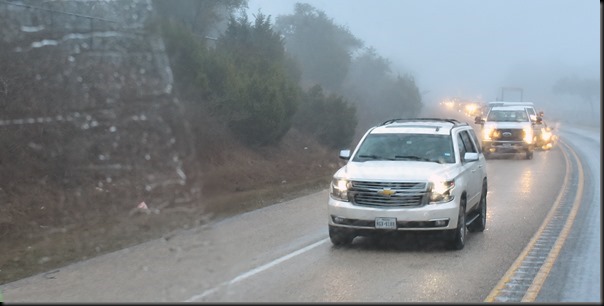 THIS BASICALLY SUMS UP OUR MORNING DRIVE 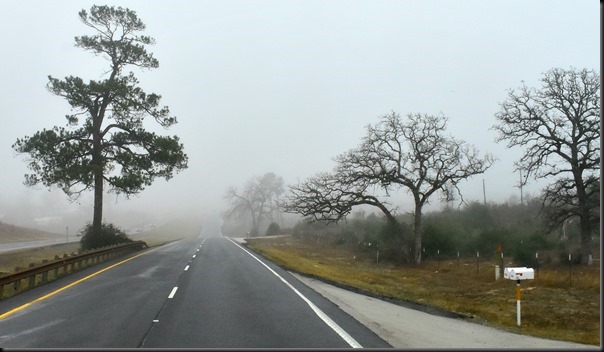 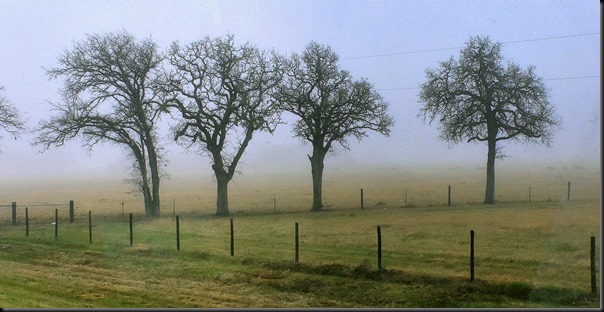 No, thankfully we did not go through Houston so we took the second option and decided to go North around Houston as well as San Antonio.  We exited off I-10 at Bourne and immediately became immersed in the areas cramped up morning rush.  Somehow managed to get through Bourne heading Northeast but traffic didn’t get any better and we fought it hard all the way to Giddings Texas.  Because of the drizzly mist in the air we didn’t get much of a chance to enjoy the Texas Hill Country scenery we were hoping to see.  Hills and dales, twists and turns, and on and on it went. 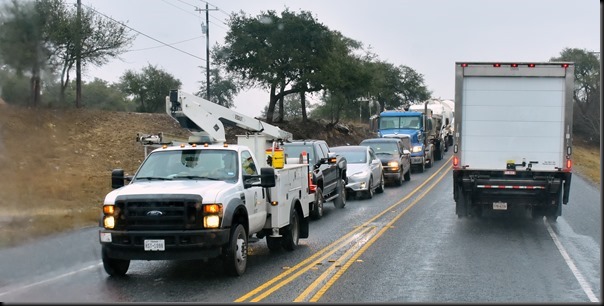 No point in me trying to tell you what highways we took but I can tell you we went through Bourne, New Braunfels, San Marcos, Bastrop, Paige, Giddings, Ledbetter, Brenham, Navasota, Montgomery, Conroe, Cleveland, Moss Hill, and Sour Lake to Beaumont.  Some of those were little bergs and easy to get through and some like San Marcos and Conroe were a royal PITA.  But we hadn’t got to Cleveland yet and that’s where the day really fell apart for us.  Cleveland chewed us up and spit us out.  Somewhere in our pre Cleveland journey we decided we would overnight in Cleveland’s Walmart.  Well good luck finding that and when we did it was the smallest Walmart parking lot we’ve ever seen and making our way through there was like maneuvering an aircraft carrier up the Bayfield River back home.  Plus there were a lot of planted trees with overhanging branches to watch for.  Then we saw the sign……No RV Parking!!  %#@!!!&**  Okay back out onto highway 105 and turned East.  About 200 yards later 105 ended at a T-intersection!!!! @%!!&*% 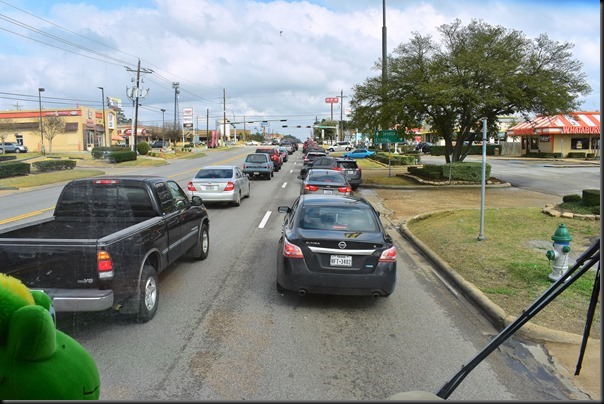 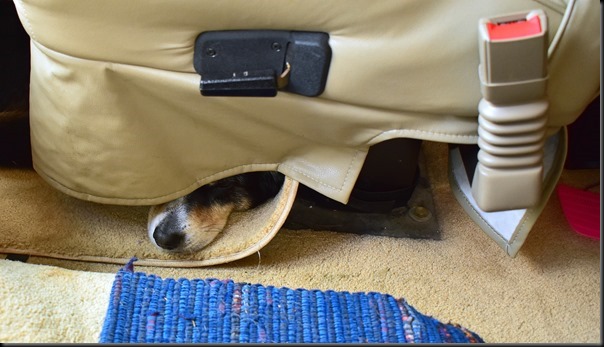 Before Cleveland we had stopped at an easily accessible McDonald in Giddings and took ourselves a half hour break with a couple coffees and a bite.  The fog and drizzle had been with us all morning but when we rolled out the east end of Giddings the drizzly fog ended and for the first time we were able to have ourselves a good look at the countryside.  Noticed right away how much it looked like our Huron County area back home and with the rolling hills I really liked the area….despite all the miserable traffic we had encountered up to that point.  From Giddings roads seemed to be better and with the exception of Cleveland and Conroe (what a traffic zoo that place was)  we found the second half of our journey easier that than the first half. 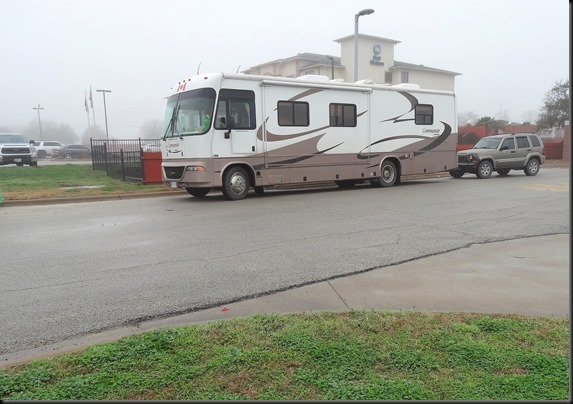 TUCKED IN BEHIND MCDONALDS IN GIDDING TEXAS 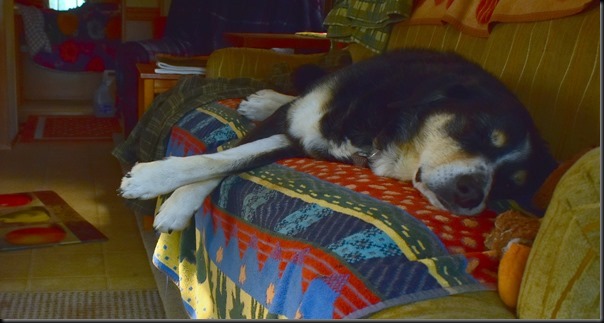 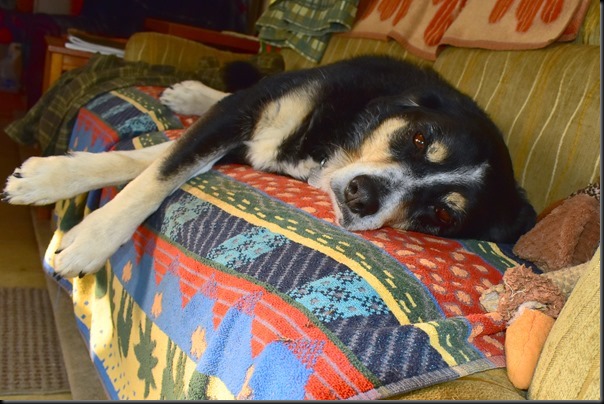 We had not planned on going as far as Beaumont Texas but after our overnight plans in Cleveland were thwarted we decided to push on to Beaumont and find us a Walmart spot for the night,  No Rest Areas along the way and due to recent heavy rains there was a lot of flooding so there were no thoughts of finding a little patch of dirt along the way to pull over.  It would have been Stucksville.

AMID TODAYS CALAMITY WE DID SEE SOME PEACEFUL RURAL SCENES

Anyway, just in the nick of time coming into Beaumont Kelly found a Walmart on our laptop and that is where this post is coming to you from.  We pulled in here about 4:45 late this afternoon so it was a loooooong and very tiring day for all of us.  Oh and to rub a little salt into our traveling woes our dash A/C isn’t working…..and it’s humid here in Beaumont:((

A FEW THINGS SEEN ALONG THE WAY 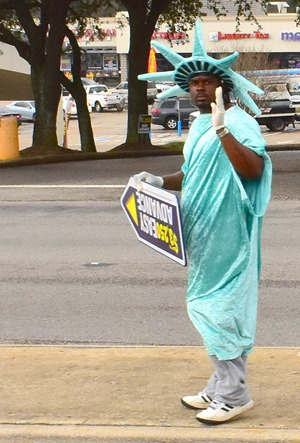 HOPE THEY’RE NOT PAYING THIS GUY TOO MUCH,,,TAKE A CLOSE LOOK AT HIS SIGN >>>

Had it not been for our GPS today guiding us through all those highways and towns we probably would not be here tonight.  I don’t know where we’d be.  Maybe still hiding out behind McDonalds in Giddings seriously contemplating our whole RV future. 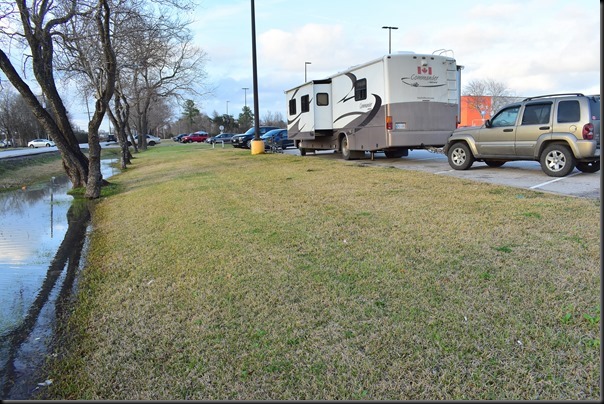 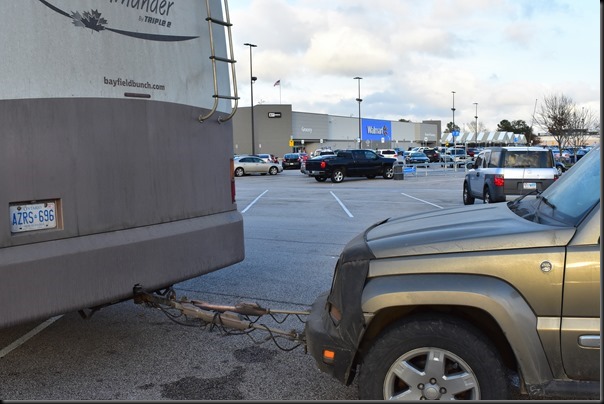 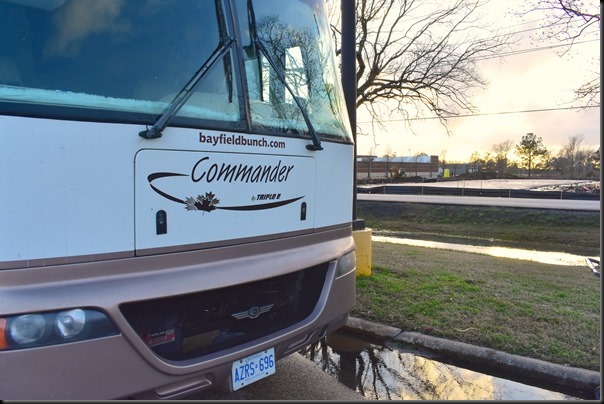 A LOT OF STANDING WATER IN THIS REGION OF TEXAS

So here’s my Houston advice to myself should we ever happen to pass this way again.  Not likely!!  I think the best way to get through Houston Texas would  be to do it early on a Sunday morning.  We find Sunday mornings less stressful with less traffic.  The Houston go-around to the North is a looooong one and it has it’s own traffic woes along the way.  So as far as stress goes it’s six of one and half a dozen of the other………….

GROANER’S CORNER:((  Have you heard about the guys who drove their pickup truck into a lumberyard? One of them walked in the office and said, "We need some four-by-twos."  "You mean two-by-fours, don't you?" the clerk said.  "Let me go check," replied the man, and he went back to the truck.  "Yeah, I meant two-by-fours," he said, returning a few moments later.  "Alright. How long do you need them?"  The customer paused for a minute to think and then finally said, "I'd better go check."  After awhile he returned to the office and said, "A long time. We're building a house."

Summer vacation was over and the teacher asked Little Johnny about his family trip. "We visited my grandmother in Minneapolis, Minnesota." The teacher asked, "Good, can you tell the class how you spell that?"  Little Johnny thought for a few seconds and said, "Actually, we went to Ohio."