BAYFIELD ONTARIO TO AUBURN INDIANA…..THE WEATHER ADVISORY WAS ‘MUCH ADO ABOUT NOTHING’ AND WE HAD US A GOOD DRIVING DAY 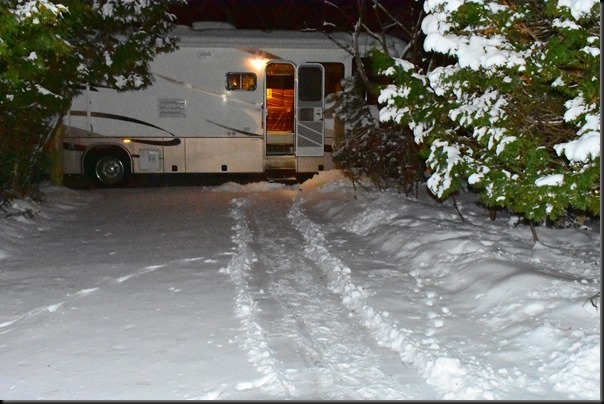 It was 5 a.m. when I apprehensively parted the living room curtains to have myself a look outside.  Everything again was covered in a layer of new fallen snow.  Earlier I had heard the big snow blower go by so knew there had to be a substantial amount of snow to bring the snow blower driver out.  By 6 I was outside with my snow shovel clearing a path to the Motorhome.  We only had about 2 inches on the ground and with no wind whipping it around I figured Thursday’s weather advisory was ‘Much Ado About Nothing’.  By 8 o’clock we had everything loaded up and off we went. 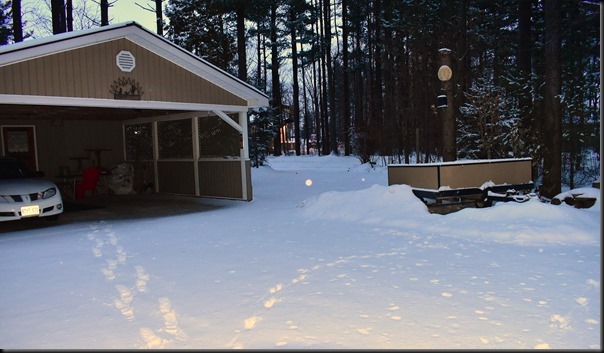 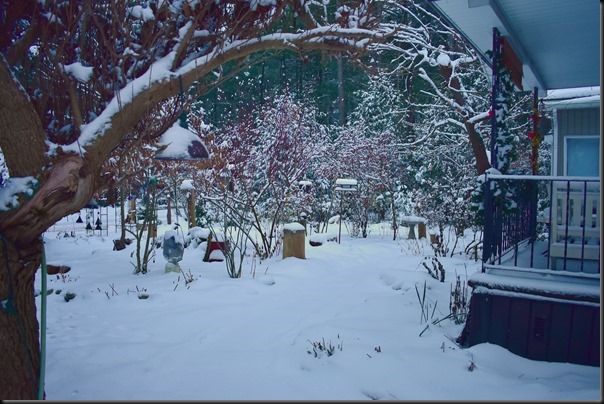 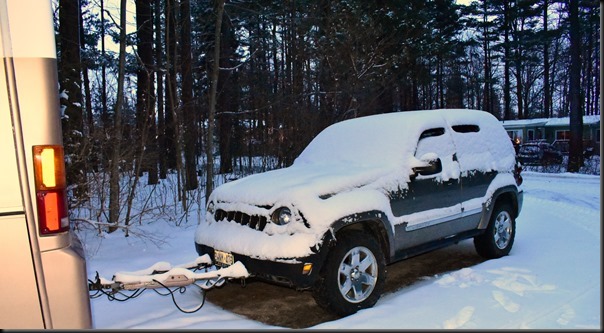 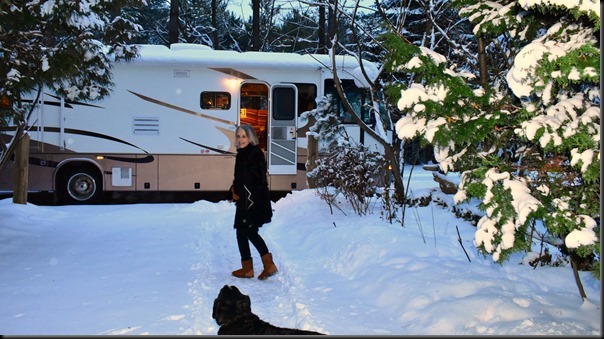 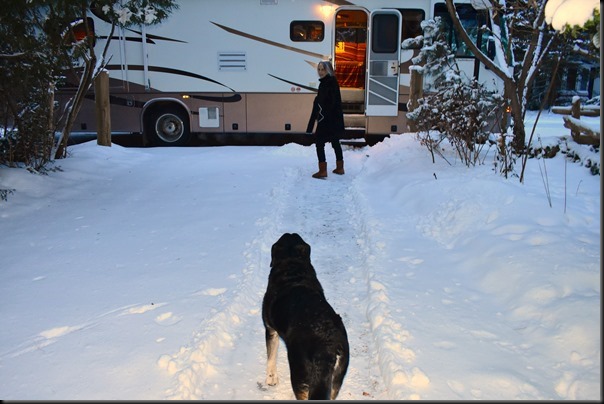 ‘BUT WILL THEY HAVE DOGGY TREATS IN CALIFORNIA MOM’?? 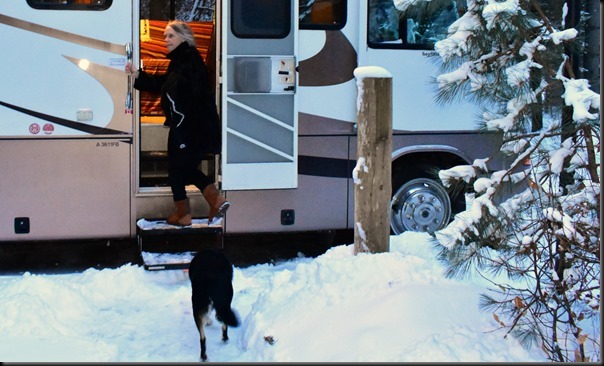 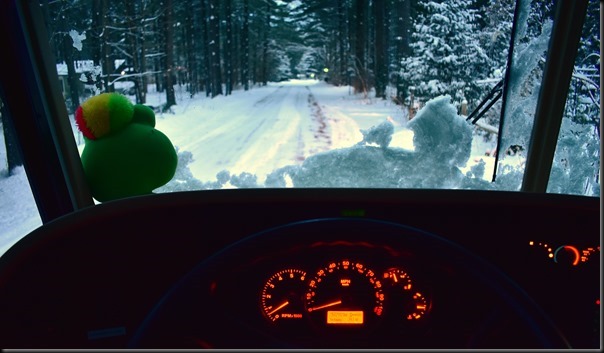 IT WAS 8 A.M. WHEN WE HAD THE BIG WHEELS ROLLING

Turns out the worst of today’s snow was right at home in our driveway with roads only being partially snow covered as far as Grand Bend.  By the time we stopped in Forest Ontario for coffee’s to go roads were bare and drive with only skiffs of snow in the fields. 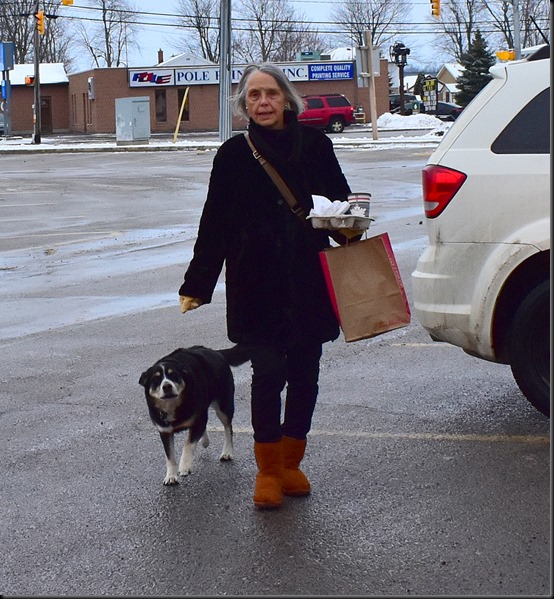 PHEEBS ESCORTS MISS KELLY BACK TO THE RIG

With Christmas being so close I figured we’d be in for a long line-up at the border so imagine our surprise when there were only two cars ahead of us.  We skipped across that international line in about 2 minutes and the day just simply got better from there.  Could hardly believe the absence of traffic on I-69.  There were times when I looked in my rear view mirror and there wasn’t a single vehicle to be seen.  Stopped at  a Rest Area and there were only 2 semis there.  Truckers must be home for Christmas.  The interstate remained bare and dry.  No wind, no rain, no snow, and cloudy skies even brightened a few times. 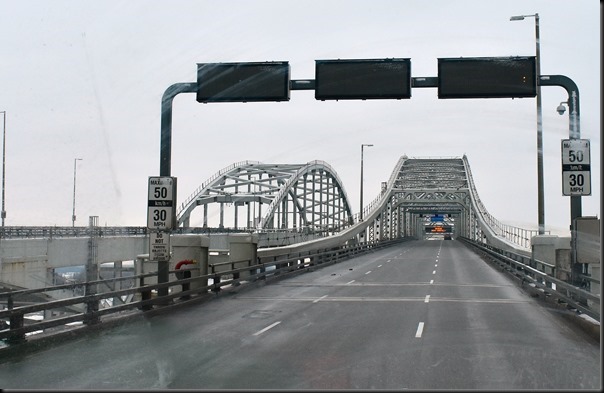 HEADING OVER THE BLUEWATER BRIDGE FROM CANADA TO THE UNITED STATES ABOUT 9:45 THIS MORNING 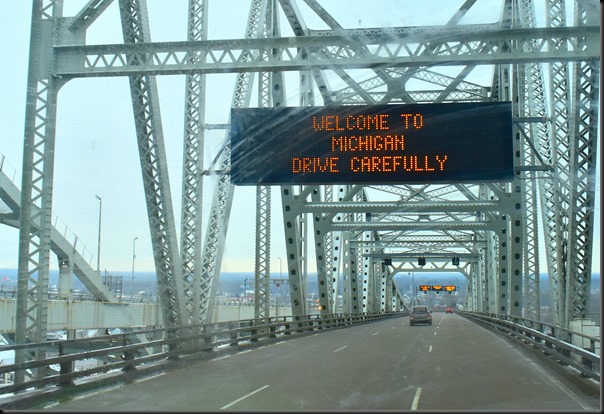 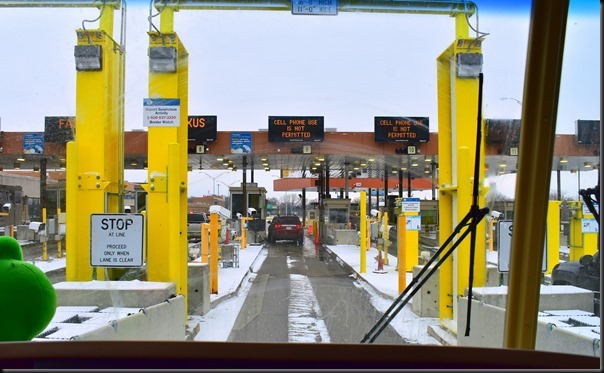 AND THIS IS WHAT IT LOOKS LIKE WHEN YOU ARE NEXT IN LINE AT THE BORDER…..THE PERSON SITTING IN THAT BOOTH UP THERE HAS TOTAL CONTROL OVER WHERE YOU ARE GOING TO SPEND YOUR WINTER……BEFORE ONE GETS TO THAT BOOTH ONE RUNS A GAMUT OF ELECTRONIC SURVEILLENCE EQUIPMENT…..NO WONDER WE ALWAYS GET BUTTERFLYS IN OUR STOMACHS AND YES THAT CORRIDOR AHEAD IS EVEN NARROWER THAN IT LOOKS 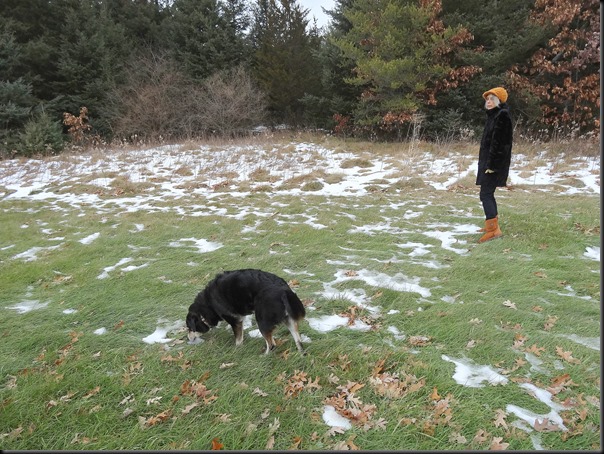 STOPPED SOMEWHERE IN MICHIGAN FOR A LEG STRETCH

We haven’t traveled this route for quite awhile so it was nice seeing old familiar names of towns going by.  We both tired early so decided to call it a day around 2 p.m. which is almost unheard of for us.   We knew there to be a couple Cracker Barrel locations ahead with one being in Auburn Indiana and the other in Fort Wayne.  We figured the Auburn location would be less busy so that is as far as we went today.  Cracker Barrels are always located very close to the Interstates and this one was so easy to reach we were almost in the door before we knew we were in Auburn.  We like doing over-nighters at those crackling of barrel places because they are usually quiet, have grassy areas for Pheebs, and we like their food.  Now having said all that, we are not exactly at Cracker Barrel for the night…..we are at Home Depot just a couple stones throw away from Cracker Barrel.  We could not find an acceptable flat spot in the CB parking lot so slipped over to Home Depot and set up camp in their flatter lot.  From there about 3:30 this afternoon we walked back over to Cracker Barrel for supper.  Kelly had their Fish-in-Chips special while I had an open face roast beef sandwich with mashed potatoes swimming in gravy.  We sure do love our Cracker Barrels and the only times we ever go there is when we are on the road traveling.  No CB’s in Canada. 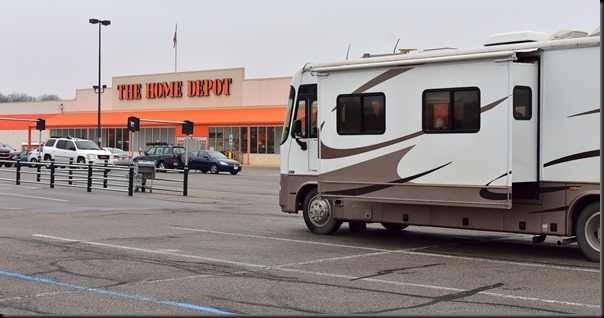 THIS IS HOME FOR THE NIGHT 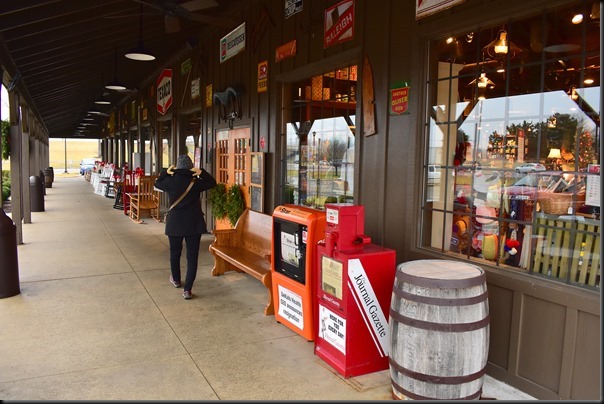 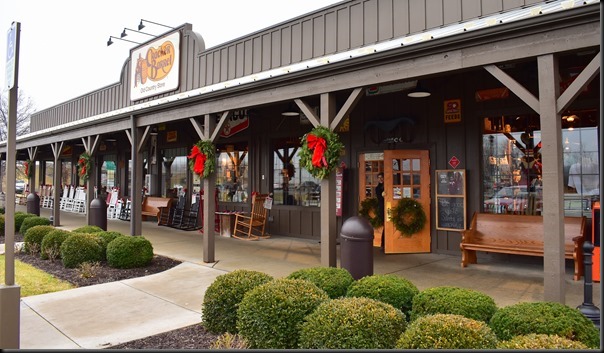 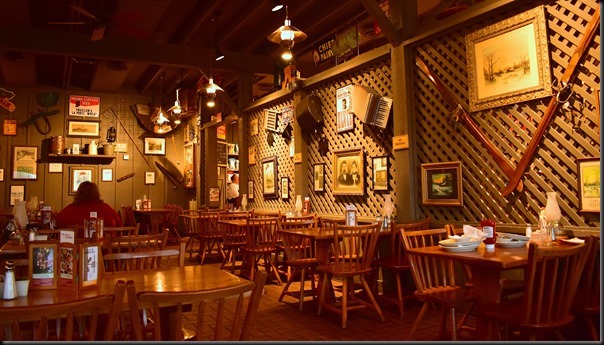 MADE SURE TO GET THERE BEFORE THE AFTERNOON RUSH AND THIS IS HOW WE LOVE TO SEE OUR CRACKER BARRELS….., EMPTY AND FREE OF NOISE

The Motorhome ran flawlessly today and it was nice being back on the road again.  As usually happens we left all of our angst of these past couple months behind and with each mile traveled our life and times and concerns in Bayfield slipped further and further away.  It has always been that way for us and I knew once we transitioned into the Motorhome we would pick up right where we had left off 10 months ago and feel much better for doing so.  Sometimes the hardest part of getting out for a walk is getting off the couch.  Oh, and tomorrow we may have us a time zone change so my published post will possibly occur in a different time frame depending on where you are. 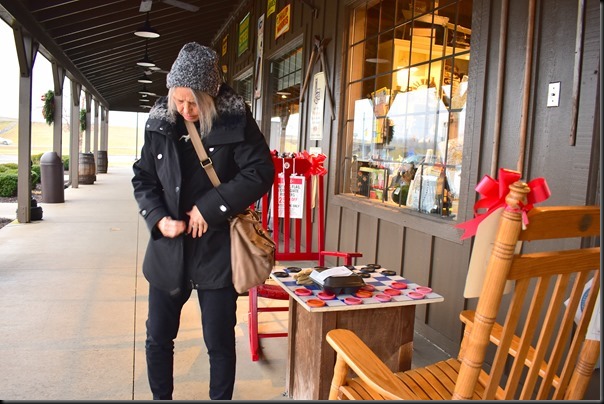 GROANER’S CORNER:((  As we were putting out cookies for Santa on Christmas Eve, I accidentally dropped one.  'No problem,' I said, picking it up and dusting it off before placing it back on the plate. 'You can’t do that,' argued my four-year-old.
'Don’t worry. Santa will never know.' He shot me a look. 'So he knows if I’ve been bad or good, but he doesn’t know the cookie fell on the floor?'