TO TOAD OR NOT TO TOAD 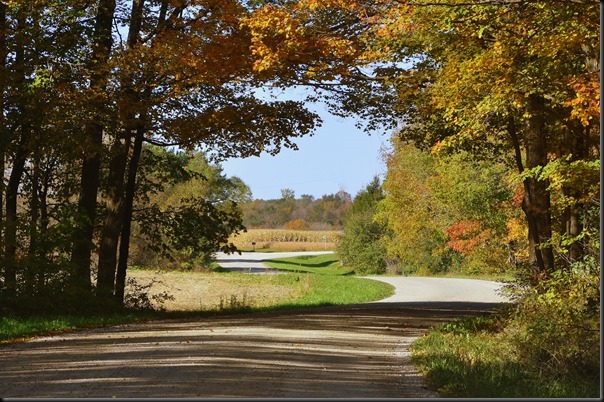 A few faint stars showing above our tall pine trees told me we had a thin cloud cover to start another mild October morn.  A touch of sun to the east beckoned Pheebs and I out of the forest and we were soon off on another Jeep ride.

THIS WINTER WHEAT WILL BE CUT IN THE SPRING

Parking lots at Huron Counties Hullett Marsh had pick-up trucks in them so I knew the Saturday morning hunters were out and about.  Our stop at one of the lots was brief and we were on our way again but not before one of the hunters told me it was Canada Geese they were hunting. 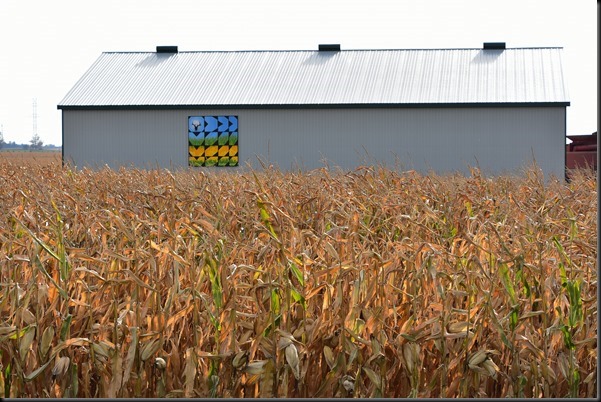 FOUND US A FEW MORE BARN QUILTS THIS MORNING 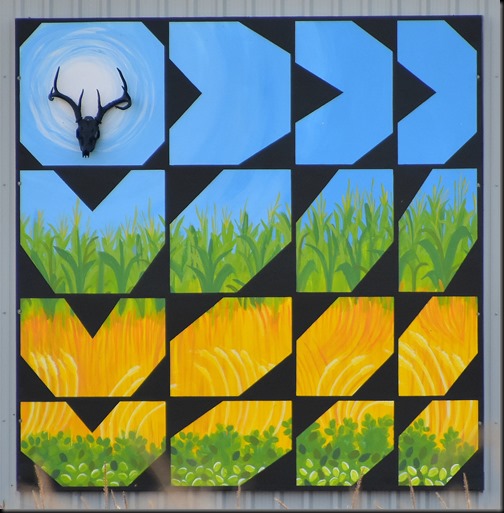 We rolled around east of Clinton for a couple hours and were back home by 11.  Kelly was busy with half a dozen projects on the go.  I got tired just watching her.  She has been like the Energizer Bunny these past few days while I have been dragging myself around like an old slug.  I must have ran a marathon in my sleep because I woke more tired than when I went to bed. 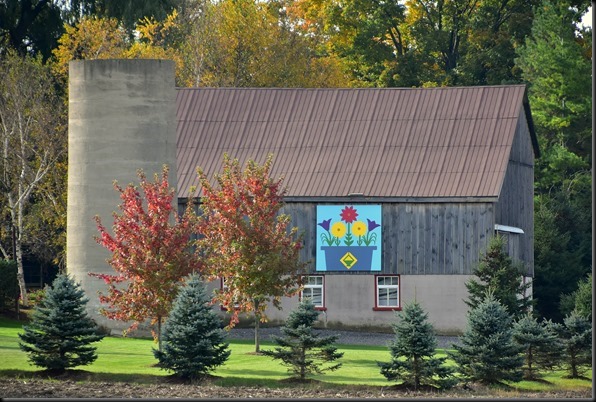 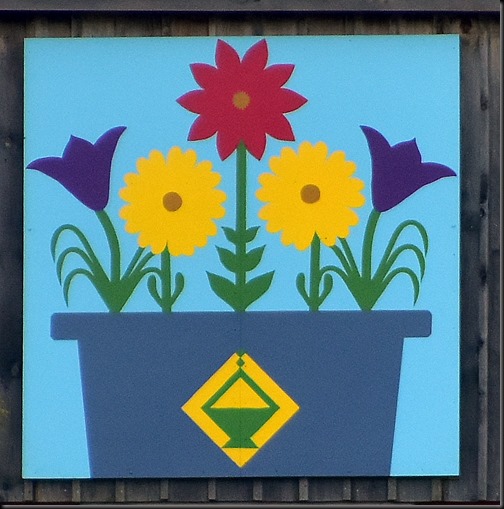 In all our RV journeys over the years we have always traveled with a tow vehicle or ‘toad’ as it is often referred to in the RV world.  Wouldn’t leave home without it.  Yes it can be a little disconcerting at times and towing does have it’s very own built in problem areas for sure but the many advantages of having a tow vehicle far outweigh the few disadvantages.  It’s reassuring to know you always have a second vehicle with you should you have a problem with your RV.  Maybe you find yourself out in the vast stretches of the Southwest and suddenly realize you do not have enough gas to reach the next far away gas station.  No problem, unhitch the toad, grab you gas can and away you go or carry a syphon hose and transfer some gas from your toad to the rig.  We carry a large ‘empty’ gas can all the time.  Maybe you wake up one morning, your rig won’t start and you don’t have a built in battery boost.  No problem, just wheel the toad around and hook up the jumper cables.  Maybe your rig breaks down and you have to be towed.  No problem and isn’t it nice to know you do not have to cram yourself into a tight fitting tow truck cab for the bumpy cramped ride to the nearest garage.  No Sireeeee, just hop into your comfortable tow vehicle and follow the tow truck.  Easy Peazy. 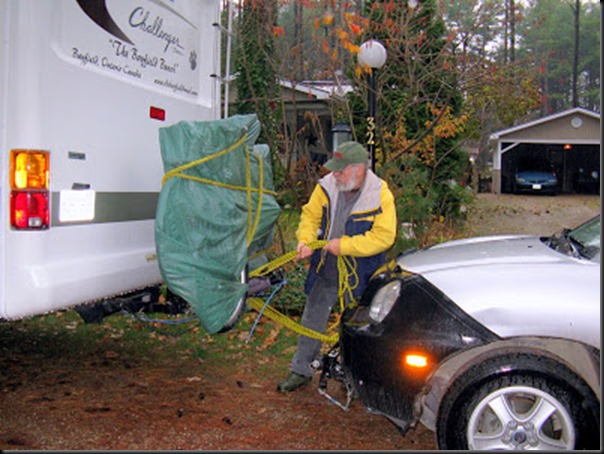 HERE I AM IN A COLD RAIN ON NOVEMBER 14TH OF 2008 WITH A ROPE TYING OUR HYUNDAI SANTA FE TO THE MOTORHOME…….YA RIGHT:)) 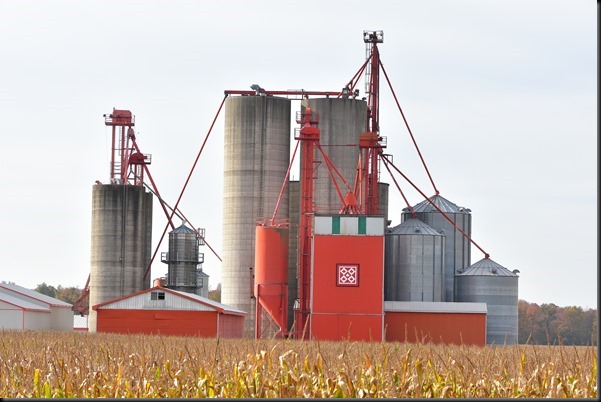 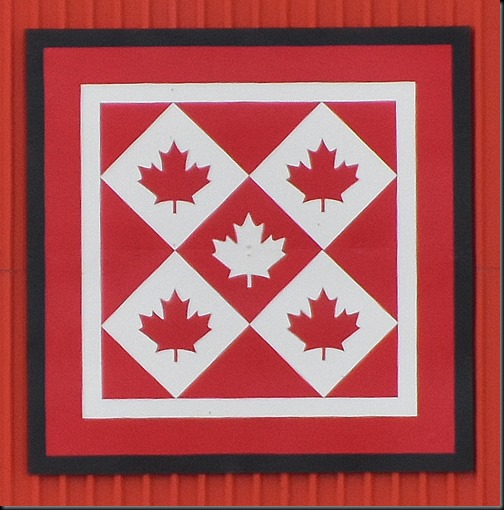 One of the greatest attractions of the Southwest for me has always been the ability to get out and explore the countless unending Jeep roads criss-crossing the deserts and mountains.  Kelly and I have spent many enjoyable hours getting into and out of places where only a four wheel drive vehicle will go.  We have seen so much great back country that if we did not have a secondary vehicle with us we would never have seen or experienced it.  For us the Southwest is all about being outdoors and having a toad to take us on day trips to wherever we want to go.  Park your house then take your tow vehicle to a movie, a laundromat, grocery store, Burger Kind, an area ghost town, a scenic outlook, or go visit some friends in the next canyon over. 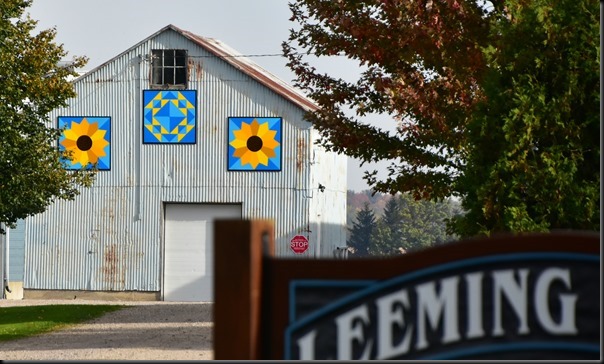 THIS PARTICULAR FARM HAD 4 BARN QUILTS 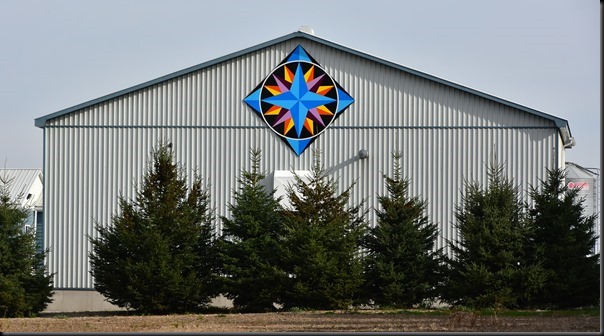 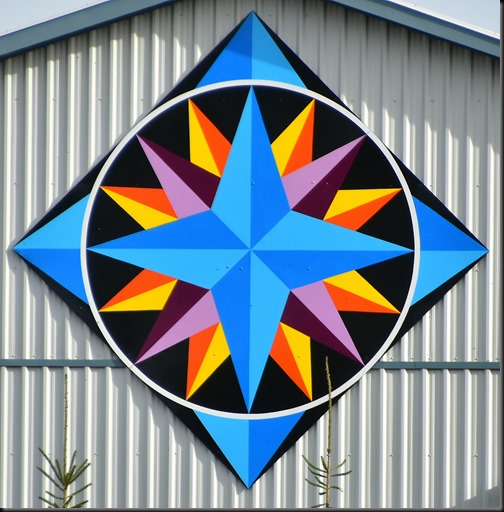 A tow vehicle can also act as a small storage shed although you have to be careful not to overload it.  For example while traveling we carry our clunky satellite dish in our tow vehicle.  Saves taking up precious space in the rig’s basement bins.  We carry a few other things in there as well but nothing of weight.

THIS FELLA WAS SURE SPREADING THE STINKY STUFF AROUND THIS MORNING

ROLLING THE BUMPS OUT OF THE HILLS I GUESS 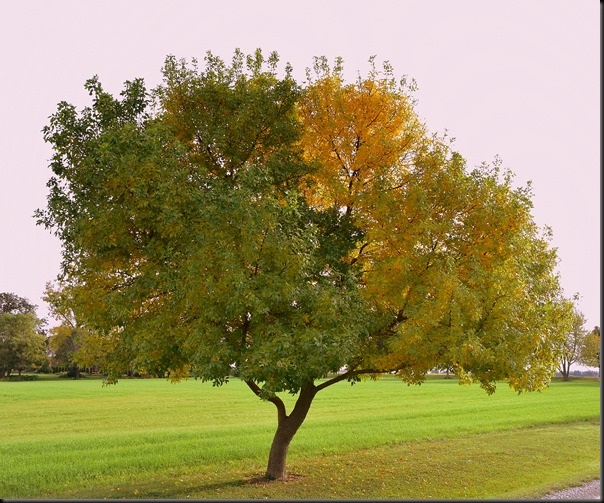 The only time we would consider traveling without a tow vehicle would be if we were doing shorter trips and not planning to stay anywhere for weeks or months at a time.  Maybe just a couple nights here or a couple nights there.  We’ve been tossing around a trip to Canada’s east coast next year and if we did that for maybe a few weeks or a month we may or may not take our Jeep.  Guess it would depend on how long we wanted to be away.  If we planned to stay on the move we wouldn’t maybe take the Jeep but if we planned on staying somewhere for a week or more then we would want to have our Jeep with us.  Don’t know so I guess we’ll have to wait and see………………..

Accountant - Someone who knows the cost of everything and the value of nothing.
Auditor - Someone who arrives after the battle and bayonets all the wounded.
Banker - The fellow who lends you his umbrella when the sun is shining and wants it back the minute it begins to rain. (Mark Twain)
Economist - An expert who will know tomorrow why the things he predicted yesterday didn't happen today.
Statistician - Someone who is good with numbers but lacks the personality to be an accountant.
Actuary - Someone who brings a fake bomb on a plane, because that decreases the chances that there will be another bomb on the plane.
Programmer - Someone who solves a problem you didn't know you had in a way you don't understand.
Mathematician - A blind man in a dark room looking for a black cat which isn't there.
Lawyer - A person who writes a 10,000 word document and calls it a "brief."
Psychologist - A man who watches everyone else when a beautiful girl enters the room.
Schoolteacher - A disillusioned woman who used to think she liked children.
Consultant - Someone who takes the watch off your wrist and tells you the time.
Diplomat - Someone who can tell you to go to hell in such a way that you will look forward to the trip.

A Mexican was attempting to cross into America, when a border guard stopped him and asked if he was an American.  The Mexican replied, "Si Senor." The border guard told him, "If you're an American, then use these three words in a sentence: 'green', 'pink', and 'yellow'." The Mexican thought about it for a while and replied, "The phone go green-green, I pink it up, and I say yellow?"

Knock Knock
Who's there?
Disk!
Disk who?
Disk is a recorded message, please leave your name and number after the beep!