We’ve been here nearly 15 years and I don’t ever remember getting as much rain as we did today.  Checking our live radar site it was if there was a narrow pipeline funneling rainwater in from Lake Huron directly to the Bayfield Goderich area.  Rains were sometimes accompanied by thunder and so hard at times I thought tree leaves might be shredded.  These rains continued from early morning through most of the day.  Pheebs and I didn’t get out of the house until after 1 o’clock this afternoon when we made a mad dash for the carport between downpours. 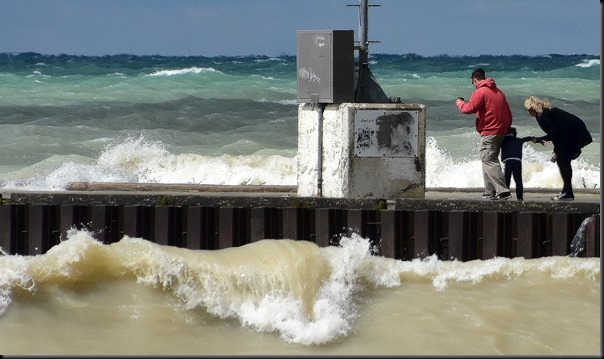 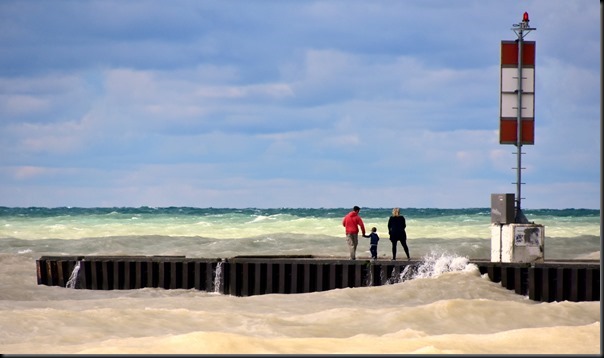 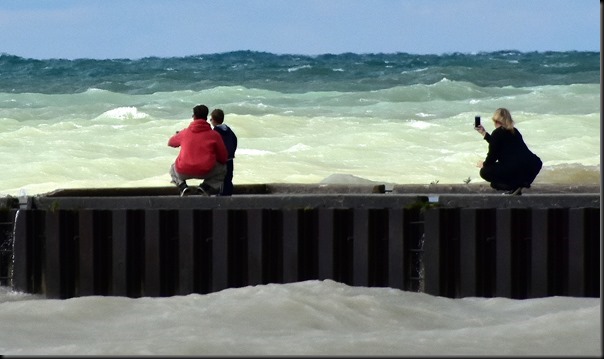 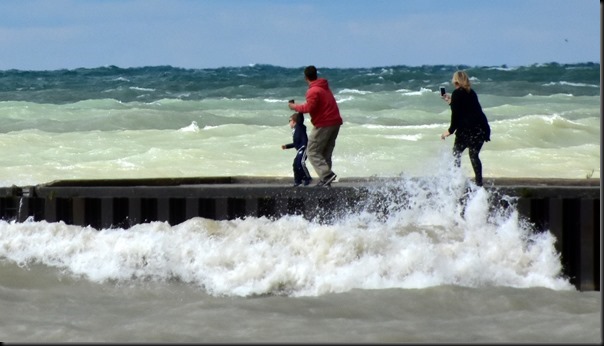 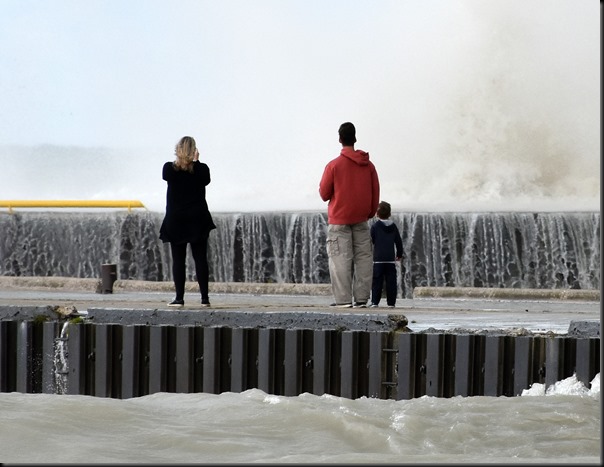 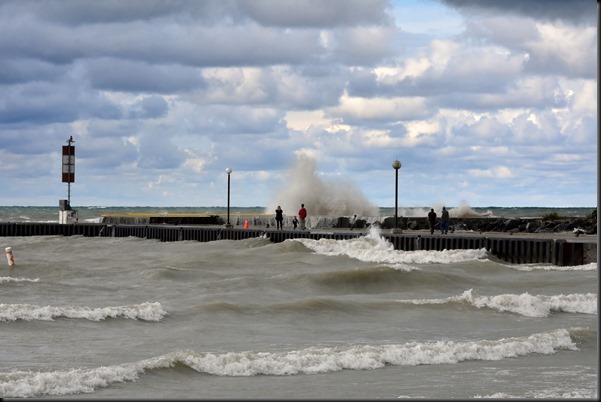 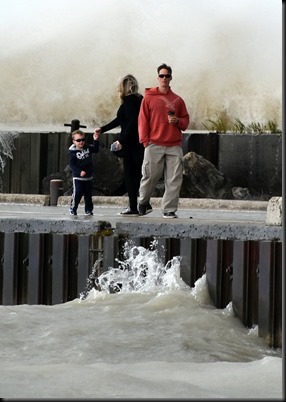 Grand Bend Ontario is only 20 minutes south of us and I noticed on their Yacht Club weather cam there was no rain there.  Despite a turbulent cloud cover I could see the sun making it’s way through so when Pheebs and I finally headed out after lunch that was the direction we went.  We didn’t end up going all the way down to the Bend when I noticed roads were totally dry just a couple miles south of Bayfield.  We turned east for awhile enjoying the massive cloud formations lumbering by overhead before finally looping our way back to rainy Bayfield again.  We were gone about an hour and a half. 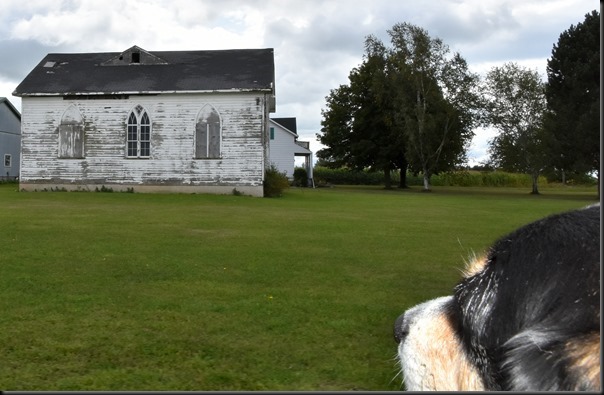 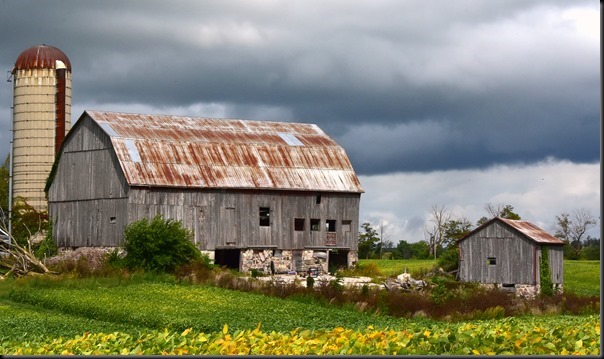 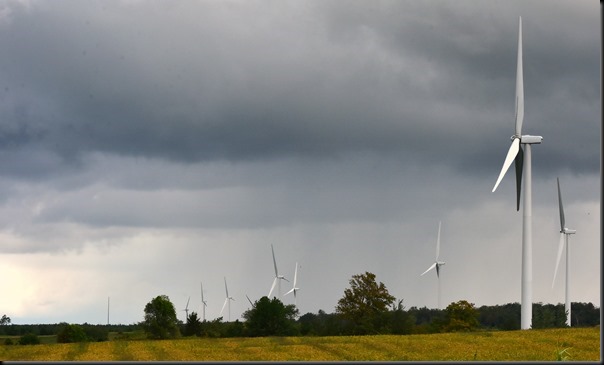 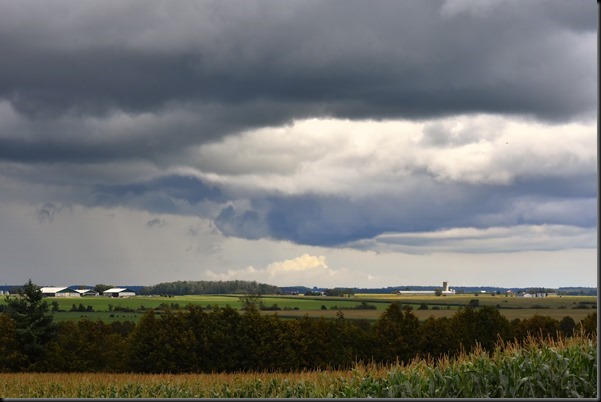 LOOKING IN THE DIRECTION OF CLINTON ONTARIO 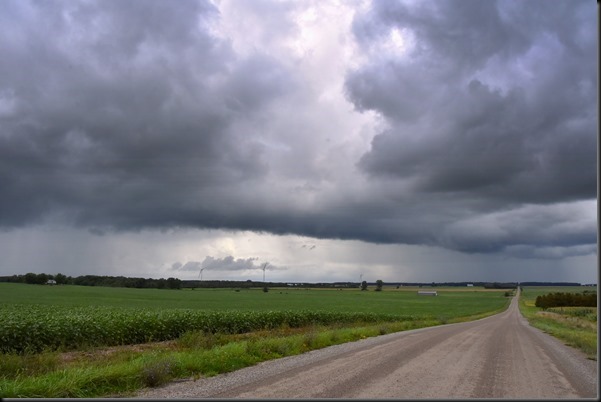 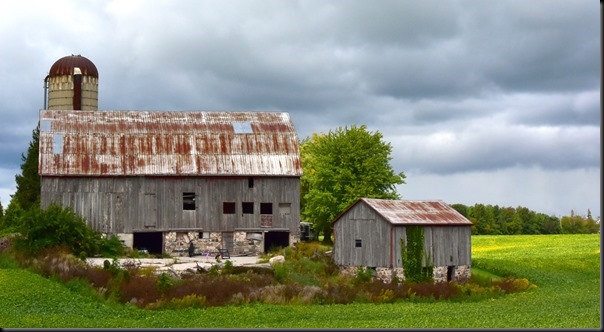 Kelly made it home from her daughter Rebecca’s house about 6 o’clock after leaving here around 8 this morning.  A long day for her but she was pretty happy that she got to see daughters Rebecca and Sabra plus granddaughter Ella. 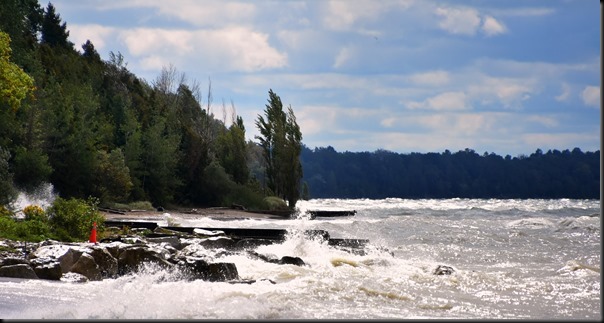 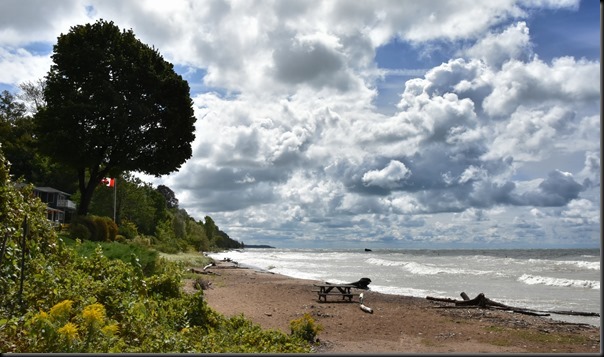 There is an odd calm over our winter travel plans.  Normally by this time I would be in the early stages of going over my lists and gathering things together to start packing up the Motorhome.  My usual pre-travel spurts of excitement don’t seem to be happening this year.  Have I put the lid on myself too tight??  Am I worrying too much about medical issues, travel and travel related costs, the long journey itself with all the traffic and cities to go through all over again.  I get myself pretty spoiled each summer driving around all these nice quiet rural backroads most every day.  In another 6 or 7 weeks we could be doing battle with Chicago or Indianapolis or half a dozen other big traffic infested cities all over again.  Is my age beginning to show or is it just me being me making mountains out of molehills again?  Don’t exactly know what it is but I do feel something somewhere has changed in this past year or so.  Kelly and I have talked several times recently about how we both have been feeling so physically tired this summer.  For me there is a mental tiredness as well as I struggle to keep my repetitive nearly 11 year old blog going.   Guess there is only one cure for all this apprehension though…….get that Jeep hooked up to the Motorhome,  load up the Bayfield Bunch and get those big wheels rolling on down the road again………………10-4!!

Here’s a live Miami Beach webcam you might want to keep an eye on over the next few days.

GROANER’S CORNER:(( A man was driving down the road. He passed a traffic camera and saw it flash.  Astounded that he had been caught speeding when he was under the speed limit, he turned around and, going even slower, he passed by the camera. Again, he saw it flash. He couldn't believe it! So he turned and, going at snail's pace, he passed the camera. AGAIN, he saw the camera flash. He guessed it must have a fault, and home he went. Four weeks later he received 3 traffic fines in the mail, all for not wearing a seatbelt.

Doctor: "Is your cough better this morning?"
Patient: "Yes. I've been practicing all night." A: The 1915 Packard Twin-Six. Used during WWI in Italy, these motors inspired Enzi Ferrari to adopt the V12 himself in 1948.

Q: What was the first car to use power operated seats? Q: Which of the Chrysler "letter cars" sold the fewest amount?