KELLY MAKES IT SAFELY HOME AND WE’RE SURE GLAD SHE DID:)) 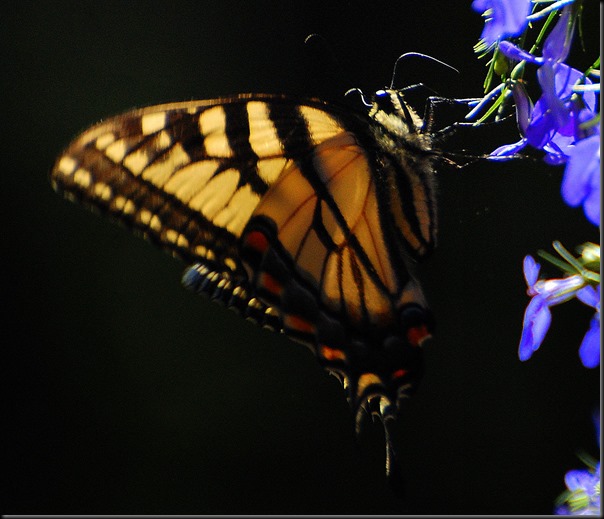 Pheebs and I didn’t venture too far this morning.  Did the morning trail around 7:30 and even then I could feel the humidity beginning to build.  An email from Kelly said she was just leaving Spencerport NY to head home.  It’s generally a five and a half hour drive so figured she would be arriving home around 1:30 if not sooner due to lighter traffic on a Saturday morning.  That gave me a bit of time to help friend and neighbor Bruce put up an aluminum garden shed at his daughter Shannon’s place next door to Bruce and Wendys.  I was there at 10:15 as work was just beginning. 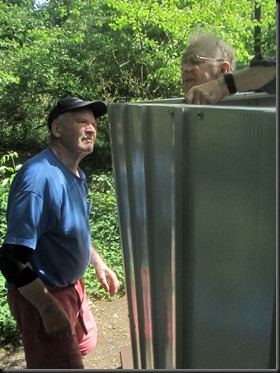 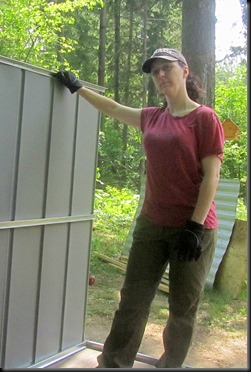 GEORGE AND BRUCE THERE ON THE LEFT AND THAT BE SHANNON ON THE RIGHT….WENDY SAID IF I TOOK HER PICTURE SHE WAS GONNA DROP-KICK ME

Now I use the word ‘help’ loosely and along with Shannon and Wendy the extent of my help was to hold and steady the shed walls while Bruce and his neighbor George did the actual assembly.  Now had they needed a hole dug or something then I could have made myself front and center useful but no digging was required.  Therefore it was holding up walls that Shannon, Wendy, and myself were able to excel ourselves at.  They are a good natured bunch and I always enjoy the kibitzing. 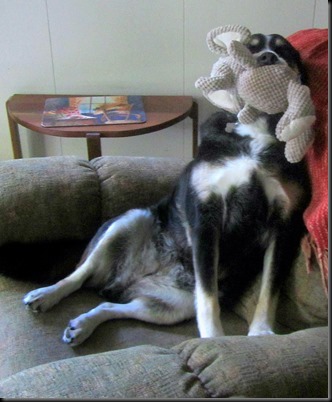 Wanting to be sure to be home when Kelly arrived I excused myself about 12:30 and two minutes later pulled into our driveway.  Most of the aluminum shed was up and the hard part was over so didn’t feel bad about leaving before it was finished.  Well not too bad anyway. 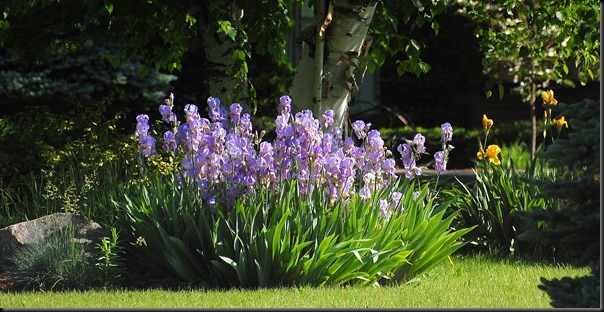 Zipped around tidying things up a bit.  I’m not a neat freak but neither am I on the other end of that scale either so I really didn’t have much tidying up to do.  I am one of those odd ball men who like to keep things neat and organized whether I’m home alone or otherwise.  No stacks of dirty dishes pile up because I only use 1 fork, 1 spoon, 1 knife, 1 plate, 1 glass, and 1 bowl.  After using each item I rinse them off in hot water and put them in the tray until next time.  Kitchen counter is clear and clean, floors swept, and anything that needs folding is folded.  I keep the washroom sparkling and being in the habit of always doing my own laundry there’s nothing piled up waiting for Kelly to do.  I’ve kinda always been like that and I am very glad I am:)) 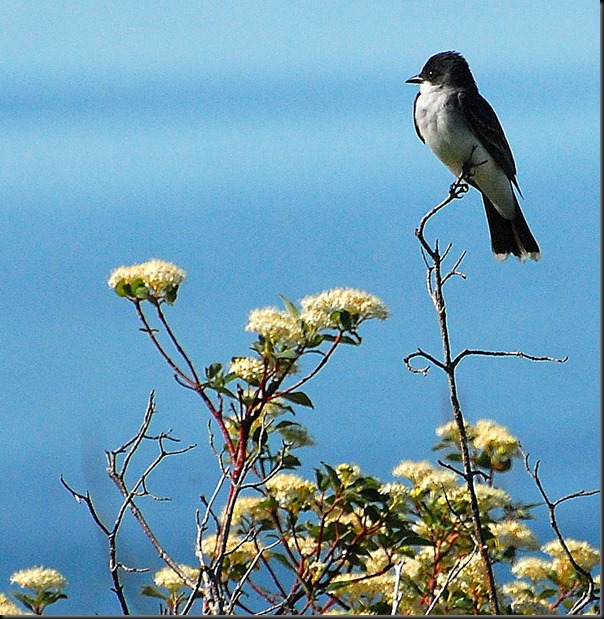 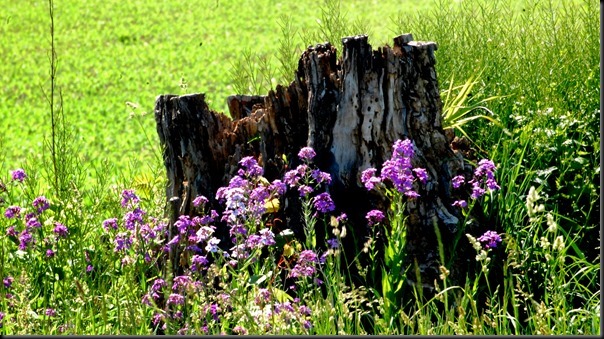 It was 1:30 when Pheebs and I sitting on our front porch saw the 2004 white Pontiac Sunbird turn into our driveway.  I had told Pheebs earlier Mom was on her way home but kept it kinda low key.  I hollered to Pheebs, ‘Mom’s home’ and Pheebs shot off the porch like a bullet and went totally bonkers. 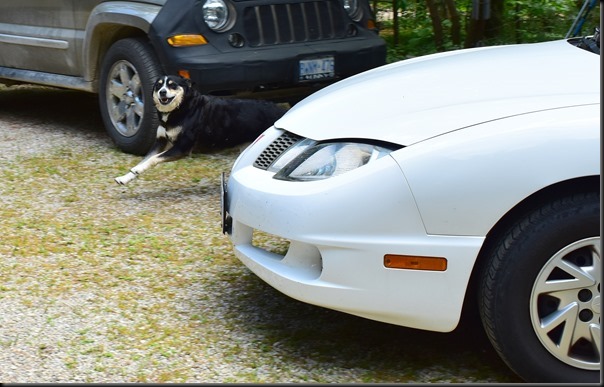 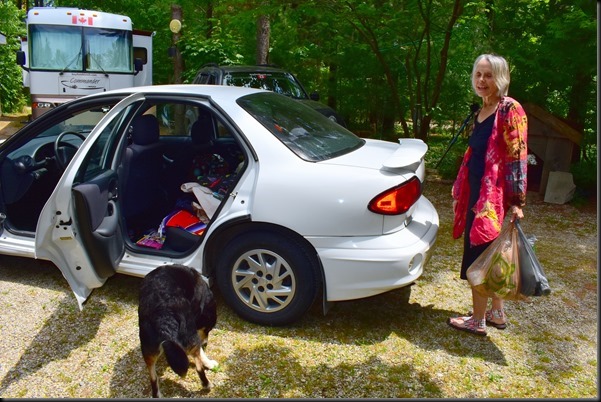 As a rule Kelly always brings a lot of stuff back with her so we were busy unloading the car for a bit.  So nice to have the whole Bayfield Bunch back together again.  She always brings a doggy treat home for Pheebs and in the photo above you can see Pheebs digging right into it.  Took us awhile to get everything put away and being very tired from her five and a half hour drive Kelly wasn’t long in settling herself down for an afternoon Siesta and I sure wasn’t long in digging into all my ‘new to me’ Nikon and Sony camera gear.  Holy Smokes I thought to myself how am I going to ever figure all this stuff out. 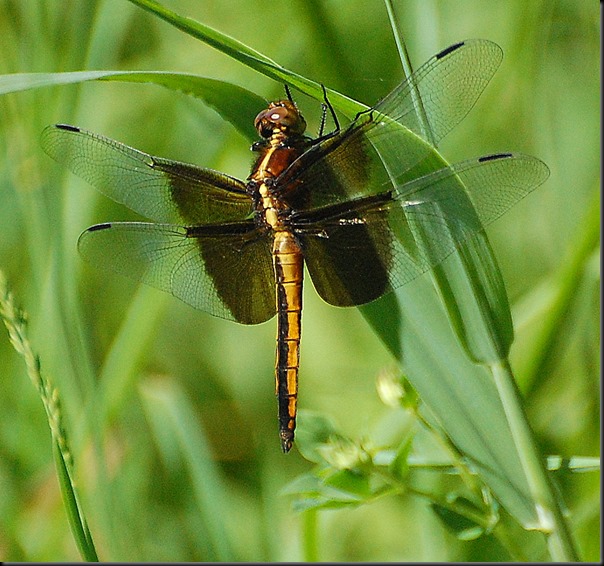 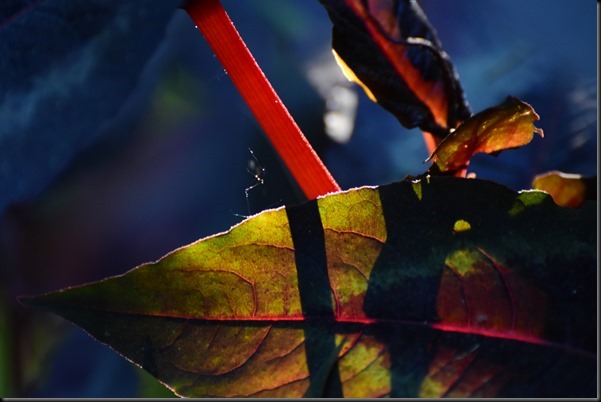 With the Nikon D7200 in one hand and the manual in the other hand I plopped myself into my recliner and started reading, pressing buttons, and turning dials.  Luckily for me I have been using Nikon cameras for over 10 years now so I already new my way around the camera a wee bit.  Some buttons and switches were in the same place and I was already familiar with the menu stuff but I wasn’t fooled into thinking this D7200 was identical to my D3100 and D3400 cameras.  No Sireeee, this camera has much more to offer and that is where my learning curve is going to be for the next little while.  Haven’t looked at the Sony yet but will get to that shortly.  Nice quality lenses came with these cameras as well.  But first things first and I will probably take that D7200 for a test drive in the morning.  And another great big ‘Thank You’ to my generous blog reader south of the border.  I’m sure the excitement I felt this afternoon would have brought a happy knowing smile to you:)) 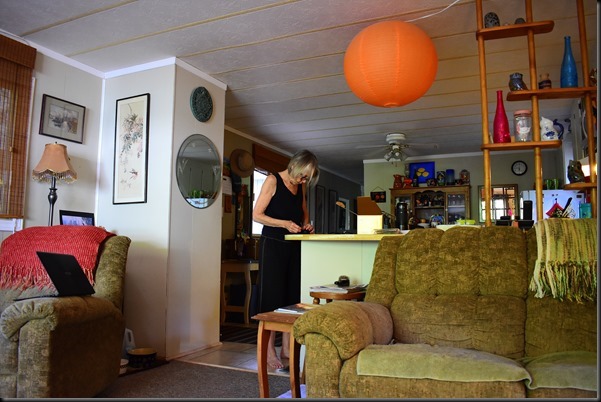 A FEW TEST PHOTOS TO SEE IF I WAS IN THE BALL PARK WITH THE CAMERA….AND I WAS 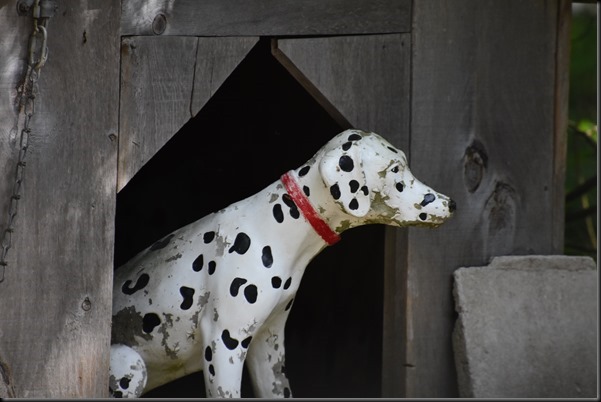 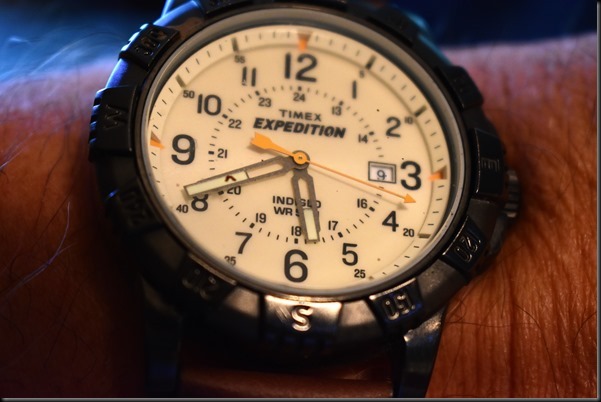 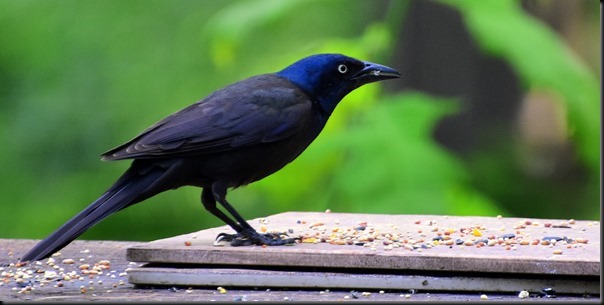 Well we had a real supper tonight with mashed potatoes and gravy, meat loaf, and green beans.  Now how about that eh.  That’s the end of Al’s gourmet kitchen antics for another year methinks.  Sure is nice to have Kelly home:)) 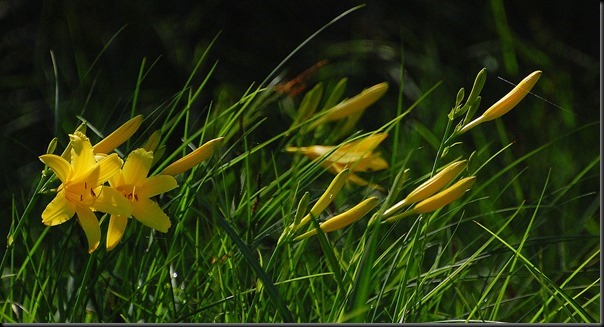 GROANER’S CORNER:(( A contestant on "Who Wants to be a Millionaire?" had reached the final plateau. If she answered the next question correctly, she would win $1,000,000. If she answered incorrectly, she would pocket only the 32,000 milestone money. And as she suspected it would be, the million-dollar question was no pushover. It was, "Which of the following species of birds does not build its own nest, but instead lays its eggs in the nests of other birds?Is it A) the condor; B) the buzzard; C) the cuckoo; or D) the vulture?"  The woman was on the spot. She did not know the answer. And she was doubly on the spot because she had used up her 50/50 Lifeline and her Audience Poll Lifeline. All that remained was her Phone-a-Friend! Lifeline. The woman hoped she would not have to use it because ... her friend was, well .. blond. She had no alternative. She called her friend and gave her the question and the four choices. The blonde responded unhesitatingly: "That's easy. The answer is C: The cuckoo."  The contestant had to make a decision and make it fast. She considered employing a reverse strategy and giving Regis any answer except the one that her friend had given her. And considering that her friend was a blonde, that would seem to be the logical thing to do. On the other hand - the blonde had responded with such confidence, such certitude, that the contestant could not help but be persuaded.
I need an answer," said Regis.  Crossing her fingers, the contestant said, "C: The cuckoo."
"Is that your final answer?" asked Regis. "Yes, that is my final answer."  Two minutes later, Regis said, "That answer is ... absolutely correct! You are now a millionaire!"  Three days later, the contestant hosted a party for her family and friends including the blonde who had helped her win the million dollars. "Jenny, I just do not know how to thank you! ," said the contestant. "How did you happen to know the right answer?"  "Oh, come on," said the blonde. "Everybody knows that cuckoos don't build nests. They live in clocks."