NOW WHY WOULD THE GOVERNMENT SEND ‘ME’ OF ALL PEOPLE A REGISTERED LETTER!!!! 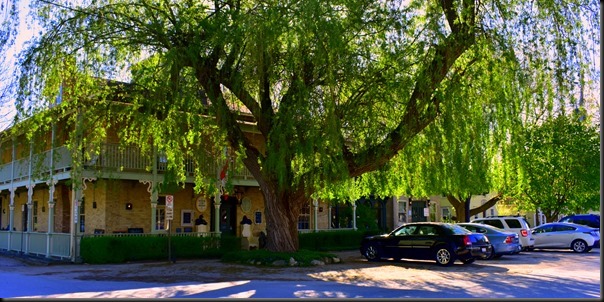 With a postal notice card telling me I had a ‘registered letter’ to pick up I could only think not good things of course.  Nobody’s going to send me a registered letter with the words inside saying ‘have a nice day’ so it was with some trepidation I headed into Bayfield this morning with Pheebs to pick it up at our local Post Office located in a south end convenience store.  A very official looking piece of mail alright and it was from the Government.  Oh horrors of horrors I thought, now what!!  Turns out it was my old passport being returned with a note saying my new passport will be delivered by courier at a later date.  Remember me writing a short while back how I generally assume the worst about things and then am pleasantly surprised when it’s the opposite.  Now had I gone in there this morning with a great big positive attitude that it’s impossible for it to be anything bad then you can bet it would have been a notice from the Government saying that I was under an audit notice for failing to pay my income taxes way back in 1965 or something.  Well that’s the way I figure it anyway. 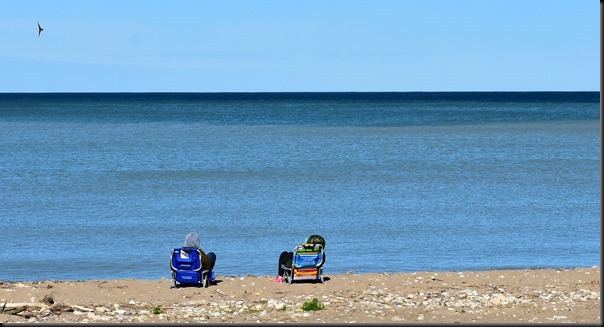 FOR A LONG HOLIDAY WEEK-END THESE WERE THE ONLY PEOPLE I SAW ON THE BAYFIELD BEACH THIS MORNING….THE STATE OF MICHIGAN IS STRAIGHT ACROSS ON THE OTHER SIDE 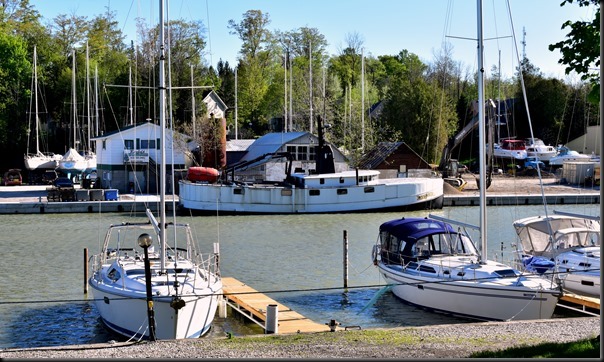 AND IT LOOKS LIKE IT WAS A DAY OFF FOR A COUPLE BAYFIELD FISHING BOATS ACROSS THE RIVER….LAKE HURON IS OFF TO THE LEFT ABOUT A QUARTER MILE 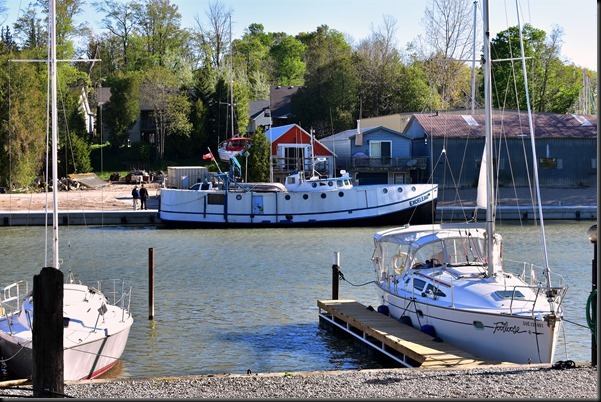 After picking up my registered letter Pheebs and I took a cruise around Bayfield.  I had expected a lot of traffic with all the tourists in town for the big May 24th holiday week-end.  Maybe 8:30 was too early for a lot of those folks to be up.  Because of ‘whiz-bang’ drivers it is rare for me to drive highway 21 which runs between Bayfield and Goderich and especially on a holiday week-end but all the way to Goderich we never had a single ‘whiz-banger’ tailgating us.  Amazing!!

SOON THIS MAIN STREET WILL BE TEEMING WITH PEOPLE SHOPPING, DINING OUT, AND ENJOYING THEIR DAY AT THE LAKE 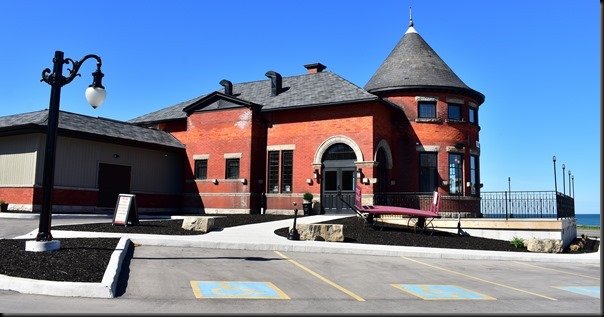 SOME READERS MAY REMEMBER MY PHOTOS FROM A FEW YEARS AGO WHEN THIS OLD RAILWAY STATION WAS GINGERLY MOVED ABOUT A THOUSAND YARDS FROM IT’S OLD LOCATION TO IT’S NEW LOCATION CLOSER TO LAKE HURON….IT IS NOW A FINE RESTAURANT 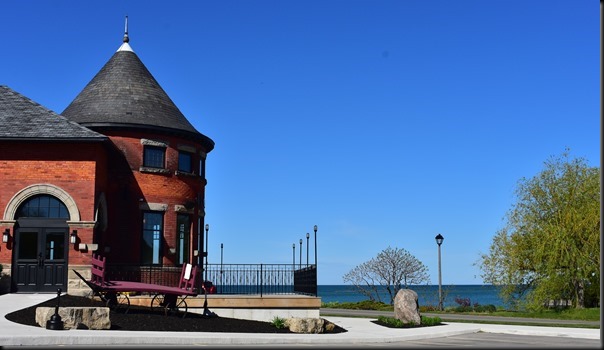 A few things to pick up in Goderich and then it was our usual routine as we grabbed a coffee and muffin and headed down to the harbor beach area.  Would have stopped for a walk at the dog walking area but somebody was already there with a couple dogs on leashes.  That doesn’t work for Pheebs and I so we just kept on going and headed for home.  Kelly and neighbor Monica had slipped on down to Grand Bend for a couple hours.  Talked to my neighbor Richard for a bit and puttered about the yard thoroughly enjoying the beautiful day that was upon  us. 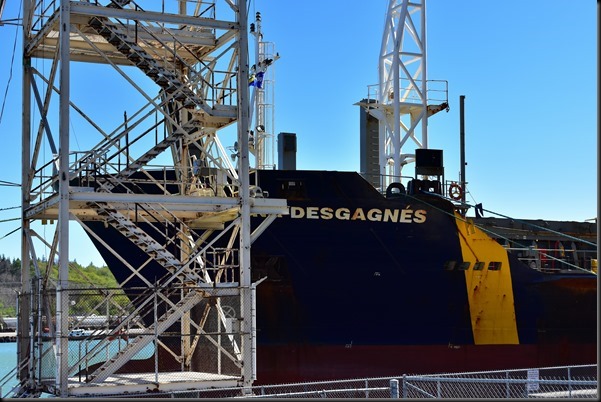 I NOTICED A FEW DAYS AGO BETWEEN SOME NEWLY PLANTED TREES ALONG THE SHORES OF LAKE HURON WORKMEN PUTTING IN SMALL CEMENT PADS AND I THOUGHT MAYBE THEY WERE GOING TO PUT PICNIC TABLES ON THEM…..NOPE 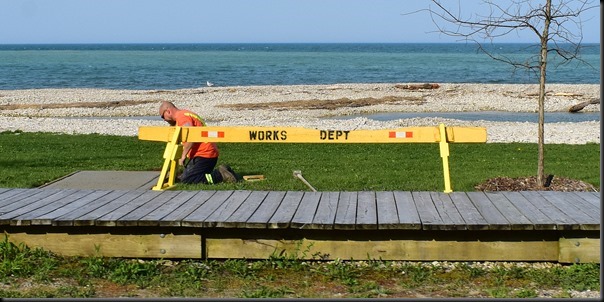 KELLY TONIGHT SAW ON FACEBOOK THESE PADS ARE GOING TO HAVE PIECES OF GYM EQUIPMENT INSTALLED SO PEOPLE WALKING OR JOGGING ALONG THE BOARDWALK CAN STOP AND DO A LITTLE CARDIO….THIS IS ALONG THE ROTARY COVE SECTION OF BEACH AND IS BEING DONE BY THE ROTARY CLUB OF GODERICH IN CONJUNTION WITH THE TOWN

For me with a daytime high of 66F today, a sunny sky overhead and a stiff offshore breeze it was about as good as it gets for working and wandering outside in the flower beds.  A day very reminiscent of a winters day in the great American Southwest.  Sunny skies, cool air and a warm sun.

IT’S ALWAYS NICE TO SEE FOLKS IN OUR 5 SEASONS PARK WORKING TO KEEP THEIR PROPERTIES LOOKING NICE….I ACTUALLY DUG THAT CORNER FLOWER BED IN WHERE THE FELLA IS WORKING OVER 10 YEARS AGO ALSO PUTTING IN SOME LARGE FLAT ROCKS WHEN THAT HOUSE WAS FIRST NEW…. I’M HAPPY TO SEE THE PRESENT OWNERS HAVE EXPANDED AND IMPROVED IT AS WELL AS KEEPING  THE FLOWERBED MAINTAINED AND AS I COME TO THINK OF IT NOW I LAYED A LOT OF THE SOD TO CREATE THAT NICE GREEN LAWN THERE TOO.

I was reminded again this morning what a marvelous program GOOGLE EARTH is.  Had received an email from blog reader Carolyn in Childress Texas wondering if we had heard about any wildfires destroying some buildings in Bisbee Arizona.  Turns out it was a house fire which destroyed a few buildings plus 5 acres of land.  The article gave the location of the fire so I hopped aboard my Google Earth plane and flew myself to Bisbee to see what section of Bisbee the fire was in.  Of course Bisbee brings back a flood of memories for us so while there I also flew over to a part of Bisbee formally called Lowell and via 'street view' touched down on Erie street right in front of the Bisbee Breakfast Club.  The BBC as it is commonly referred to has been one of our favorite breakfast places since way back in February of 2009 with our last stop there just this past January while in the area.  And what would be a stop at the BBC without a leisurely stroll down Erie Street where time has stood still for the past 50 or 60 years.  Oh the memories and photos I have of this historic street and it's fine old cars. Thanks Carolyn for mentioning Bisbee Arizona this morning and what a nice way to start my day.  And of course thanks to the folks at Google for the technology smarts in coming up with their absolutely great program called Google Earth:)) 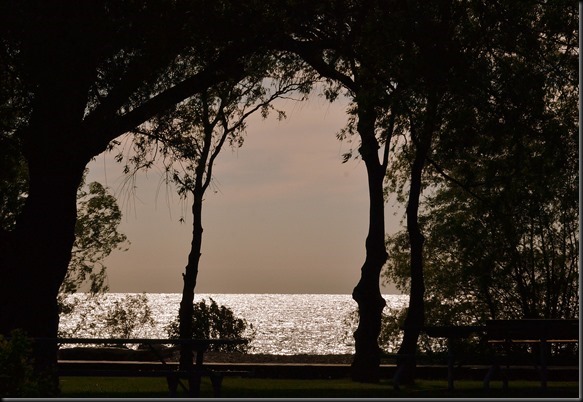 ALONG THE SHORES OF LAKE HURON IN GODERICH ONTARIO

- Everyone has a photographic memory ...some just don't have any film.
- Your ridiculous little opinion has been noted.
- I used to have a handle on life...but it broke off.
- If you can read this...I can slam on my brakes and sue you.
- Some people are only alive because it is illegal to shoot them.
- Try not to let your mind wander...It is too small and fragile to be out by itself.
- Welcome to America ...now speak English

Years ago, the then President and Mrs. Clinton were vacationing in their home state of Arkansas. On a venture one day, they stopped at a service station to fill up the car with gas. It seemed that the owner of the station was once Hillary's high school love.  They exchanged hellos, and went on their way.  As they were driving on to their destination, Bill put his arm around Hillary and said, "Well, honey, if you had stayed with him, you would be the wife of a service station owner today."  She smirked and replied, "No, if I had stayed with him, he would be President of the United States right now."