WHAT A DIFFERENCE A DAY MAKES

Yes what a difference indeed.  Saturday I did not have the mental or physical energy to swat a fly and today I could have taken on a whole herd of charging Rhinosaucerouses and beat em all back.  Pheebs and I did get out for a drive over to the Hullett Marsh Saturday morning where I took that 'Ducks Taking Flight' photo but the rest of the day just simply went downhill into the dumpster.  Physically tired, mentally tired and just plum everything tired.  I was glad when it was finally time to turn the lights out Saturday night. 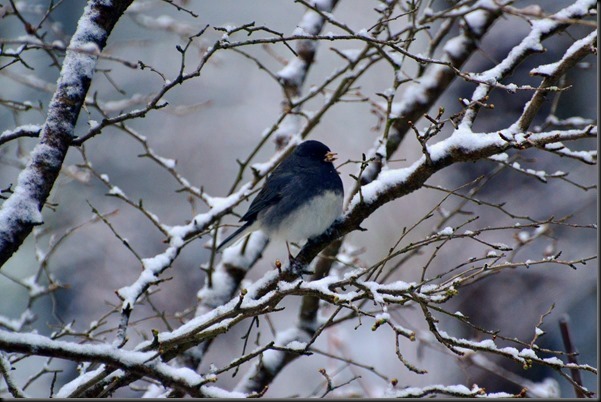 This morning for no apparent reason I seemed to wake up in Roadrunner mode.  Sometime in the night my mind and body somehow re-booted itself and I was good to go again.  Mentally energized by a partial sunny sunrise Pheebs and saddled up Libby and took ourselves for a ride into Bayfield.  I was curious to see where the Charles Street Market had moved to.  Some may remember a couple weeks ago when Pheebs and I stopped in for a coffee and Morning Glory muffin to go.  Well they hadn't moved too far just across the road.  I hit it lucky again and the Morning Glories had just come out of the oven.  Another great coffee along with a warm muffin in hand I headed back to the Jeep where I had left Pheebs patiently waiting. 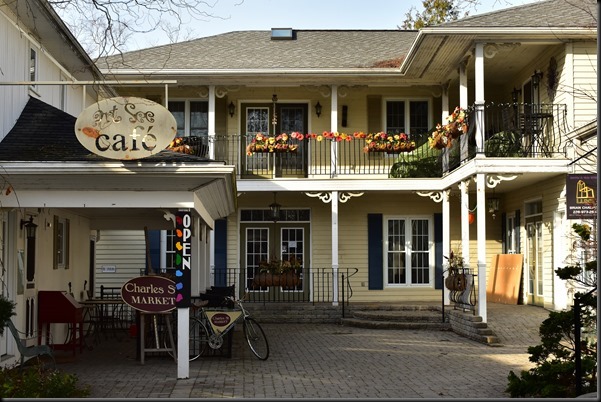 THE CHARLES STREET MARKET IS THERE ON THE LEFT 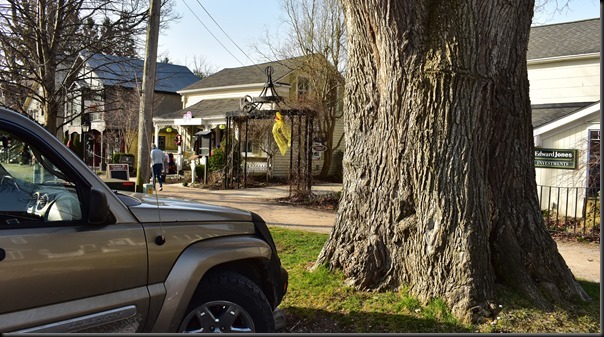 LOOK FOR THAT WOODEN ARCHWAY ON THE WEST SIDE OF MAIN STREET……AND DID YOU NOTICE THAT HUGE TREE IN THE FOREGROUND, MAIN STREET HAS A FEW OF THEM

Our short drive this morning took us southeast of Bayfield through wind turbine territory but we didn't pay much attention to them, rather we quite happily enjoyed simply taking in natures sights along the way.  Couldn't quite get myself into photo mode so my cameras rested quietly between the seats.  Had it in my mind to get a bunch of loose ends tied up regarding my yard work today so we were back home about an hour after we had left. 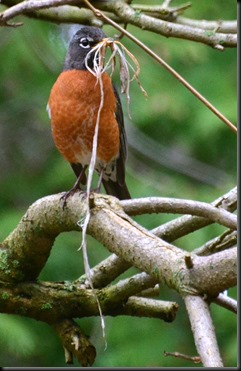 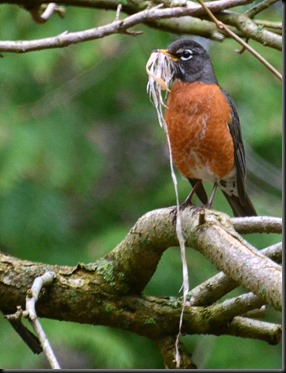 First thing I did was haul out our power washer and have a go at the Jeep giving it a good spray underneath to get rid of that corrosively miserable road salt.  Next came the Motorhome and it was a good half hour getting all the salt of that too.  Next the rig will have to be washed down with soap and water but that's for another day.  While I had the power washer out I cleaned up some cement sidewalk slabs and a couple mildew laden lawn chairs.  Gutters needed cleaning so I was up and down a tall ladder doing that as well.  More things put away in their proper storage places and probably another half dozen little jobs finally taken care of as well all the while being very mindful of my sore left arm.  Still can't lift anything heavy or do any raking and especially no pitchforking of pine needles into the utility trailer.  Aside from those few things I was able to tie a lot of those loose ends up and although sore and tired at the end of the day it was a fine feeling of accomplishment I ended the day with.  So unlike the day before. 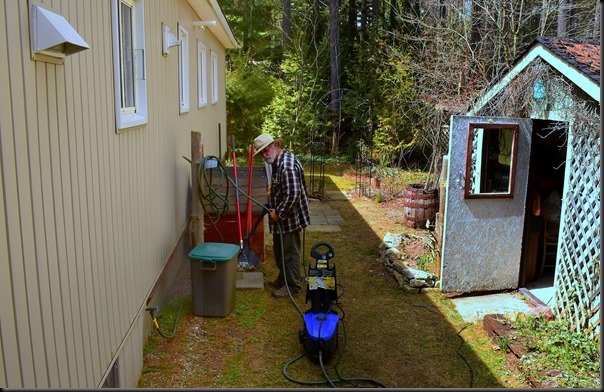 LOOKS LIKE SOMEBODY GOT A HOLD OF MY CAMERA AGAIN 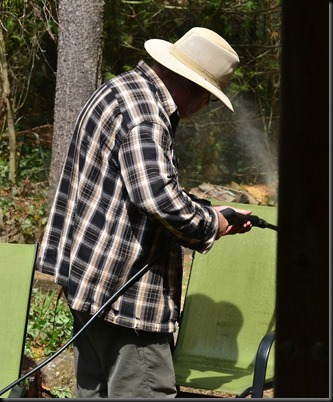 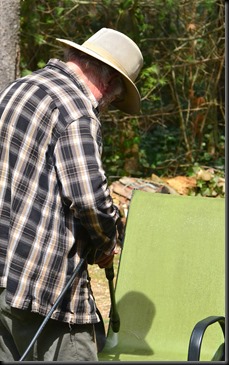 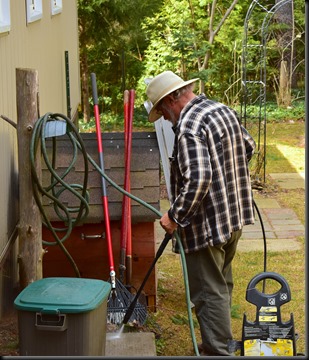 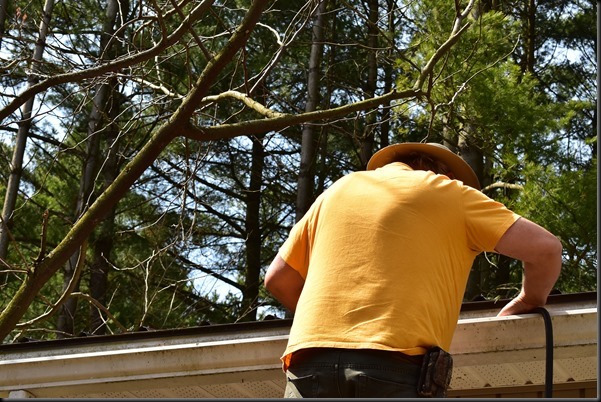 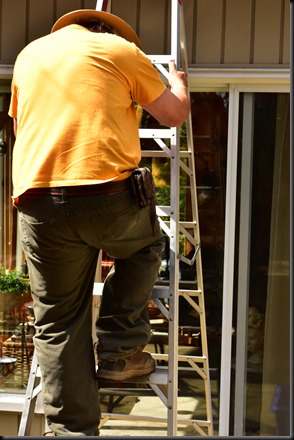 <<< DON’T KNOW IF I AM ASCENDING OR DESCENDING THE LADDER

Weather wise it was a bonus day with temperatures up around the 70F mark methinks.  Since returning from the Southwest a little over a month ago I had been wearing my winter lined pants and today I was actually able to put on a normal pair of pants again.  And holy smokers I was even able to take off my flannel winter shirt as well which left me with a short sleeve T-shirt.  WOW can you imagine what a nice feeling that finally was.  And how nice today to leave all our doors and windows once again.  In fact at the time of publishing this tonight I still have our sunroom’s patio door wide open. 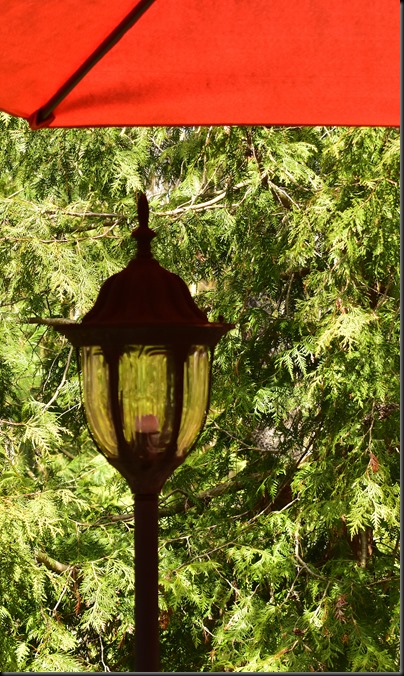 With my back becoming a wee bit sore I finally had to reel myself in around 2 p.m. but not before totally breaking my wrist watch.  I was atop a ladder when my watch simply came detached from my wrist and plummeted to it's demise on a concrete patio stone below.  Broke the second hand right off.  I was sad about that because I'd had that Wally World watch for probably 3 or 4 years.  I get attached to things so after picking up my old friend and taking him into the house by the sink I held a little memorial service before gently laying it to rest in our garbage can.  I may have to head off to Walmart in the morning in search of my next newest best friend watch.  I like watches and always have but I'm not a fancy watch guy.  Just a plain and simple time piece so I can keep track of myself through any ordinary day. SO NICE TO SEE COLORFUL SIGNS OF SPRING BEGINNING TO APPEAR 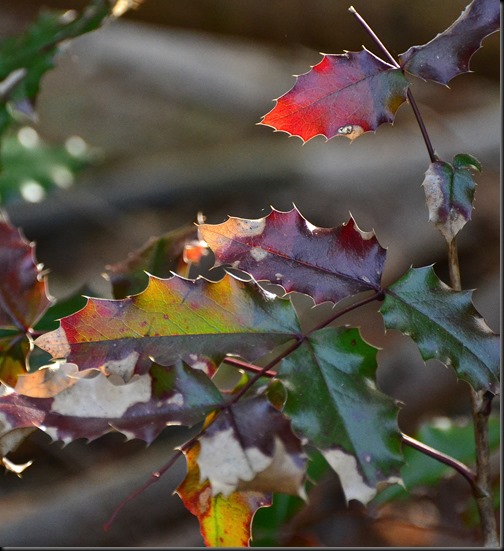 AND WE HAVE HOLLY GROWING IN OUR YARD TOO 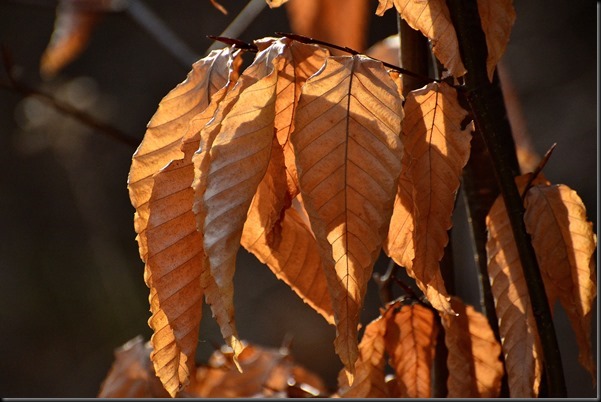 STILL A FEW AUTUMN LEAVES TO BE FOUND 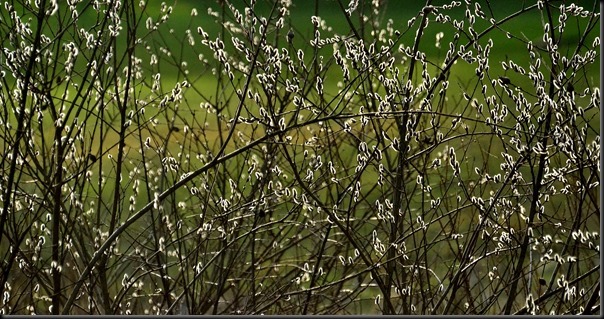 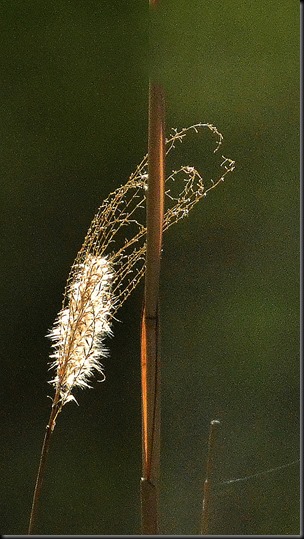 SPRING IS SLOWLY BEGINNING TO BUD OUT ALL OVER

After supper I took Pheebs for a walk around our Pine Tree trail and that’s the first time I’ve been around it since coming home.  Kelly has been around the trail many more times on her morning walks with Pheebs.  Took my camera with me and was able to catch some wildlife on the Park’s pond. 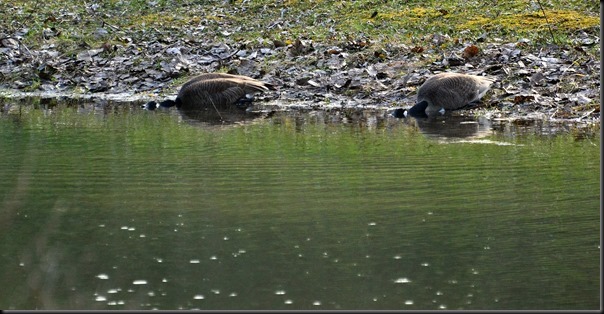 SPOTTED A PAIR OF MALLARD DUCKS 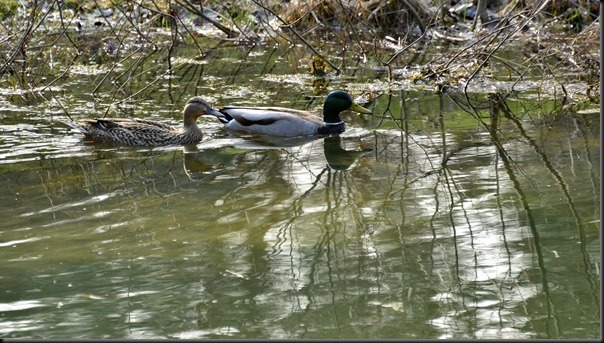 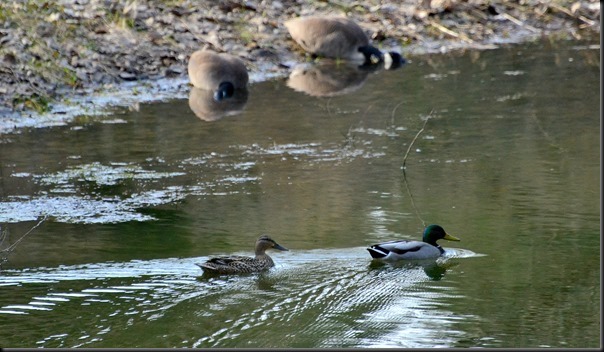 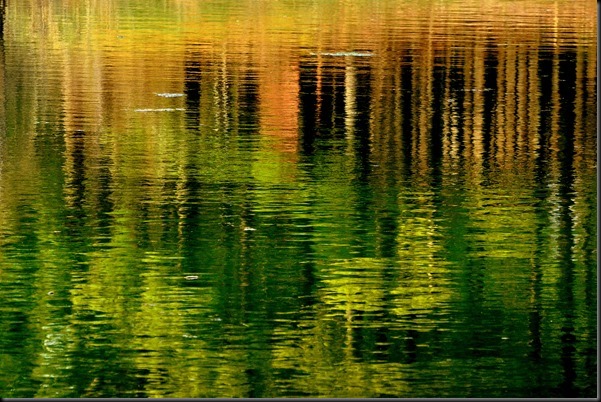 POND’S DULL  REFLECTION WITH A HEALTHY DOSE OF SATURATION ADDED FOR ARTISTIC EFFECT:))

GROANER'S CORNER:((  One Sunday morning, the pastor noticed little Alex standing in the foyer of the church staring up at a large plaque. It was covered with names and small American flags mounted on either side of it.  The six-year old had been staring at the plaque for some time, so the pastor walked up, stood beside the little boy and said quietly, "Good morning, Alex."
"Good morning, Pastor," he replied, still focused on the plaque. "Pastor, what is this?" The pastor replied, "Well, son, it's a memorial to all the young men and women who died in the service."  Soberly, they just stood together, staring at the large plaque. Finally, little Alex's voice, barely audible and trembling with fear asked,"Which service, the 8:00 or the 9:30?"

“Why do some people hate puns? Because they are laughtose intolerant!”

Little Johnny watched, fascinated, as his mother smoothed cold cream on her face. "Why do you do that, Mom?" "To make myself beautiful," she answered. She then began to remove the cream with a tissue. "What's the matter?" Johnny said,  "Giving up?"