ANOTHER DOCTOR APPOINMENT OUT OF THE WAY 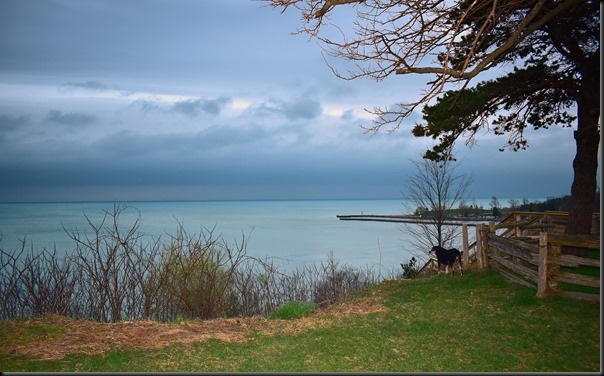 A fast moving storm rolled in across Lake Huron and heavy rains were upon us by 9 a.m. but not before Pheebs and I were able to get out and catch us it’s approach from the cliff top at Bayfield’s Pioneer Park.  Despite lightning and thunder overhead I was unable to catch me a lightning bolt photo before the rains hit. 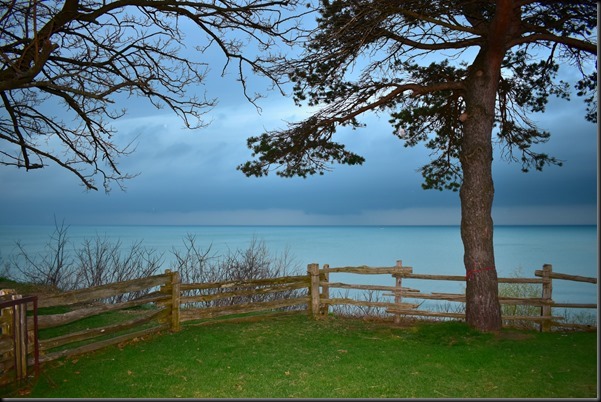 A RAIN STORM BARRELING IN ON BAYFIELD 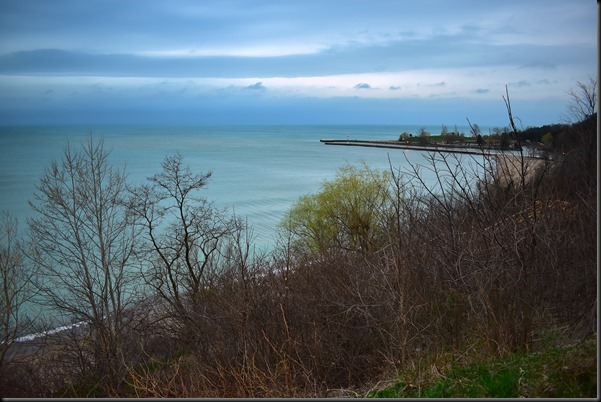 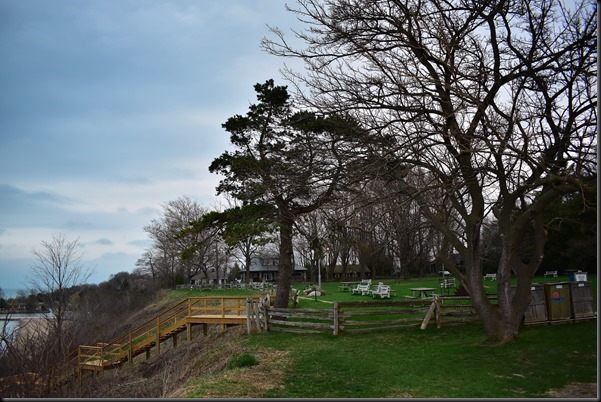 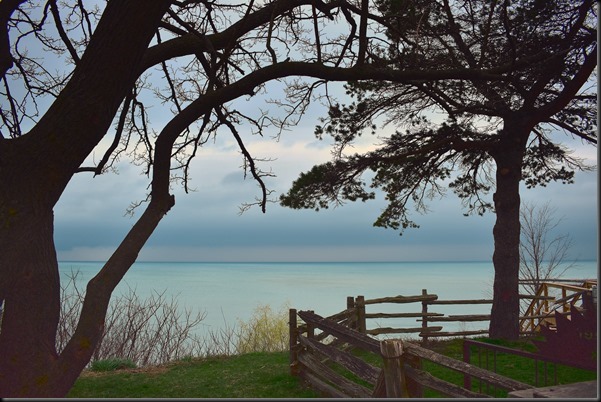 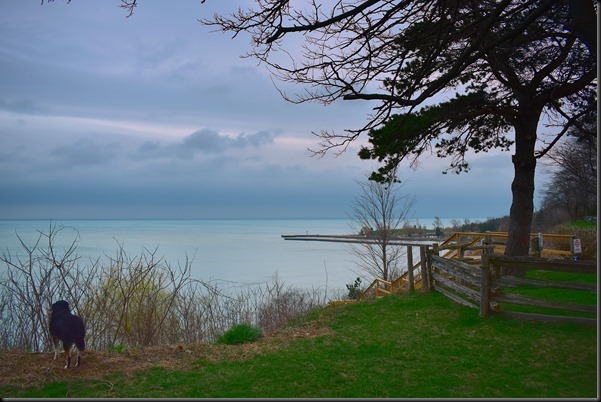 Saw a Bayfield fishing boat not far off shore and figured it was heading in but noticed no bow wave so they weren’t in a hurry.  In fact they made a turn to port and headed out straight into the path of the storm.  Moments later they disappeared in a wall of water as Pheebs and I made a mad dash for the Jeep.

Buckets of rain were soon upon us as we made our way down to the harbor before heading home.  Half an hour later the fast moving inbound storm had passed and we were left with lighter skies and a moderately gentle rain.  Temperatures hung around the 45F mark for the day……but the heavy rains hadn’t finished with us yet. 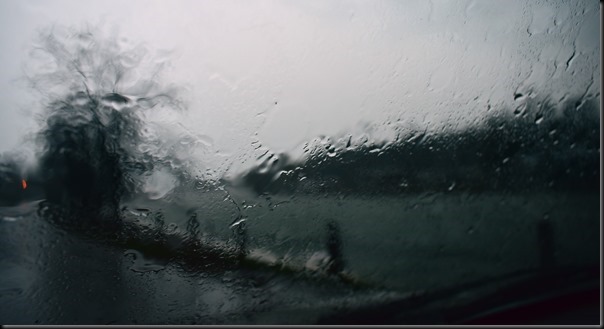 HEADING DOWN TO BAYFIELD’S HARBOR

Ticked off another Doctor’s appointment this afternoon and the results of that were again on the good side with the Doctor telling me I do not have to have another colonoscopy for 5 years.  As it’s turning out I seem to be in much better shape than I thought I was.  Two more medical appointments coming up next week, one for Kelly and one more for me regarding my legs.  After my Doctor’s appointment this afternoon we popped into A&W for a Teen Burger special then headed home in a rain squall.  At the time of publishing this tonight we are under a weather advisory with a heavy rainfall predicted overnight. 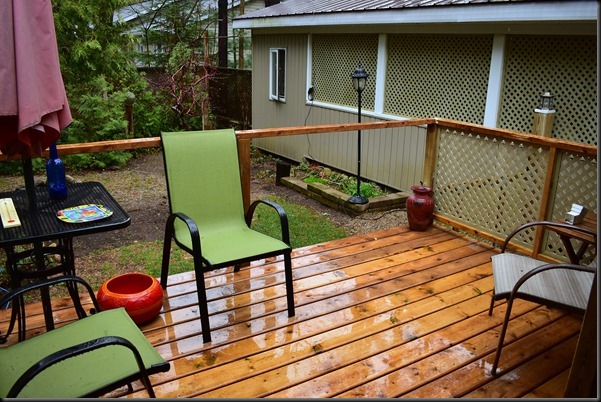 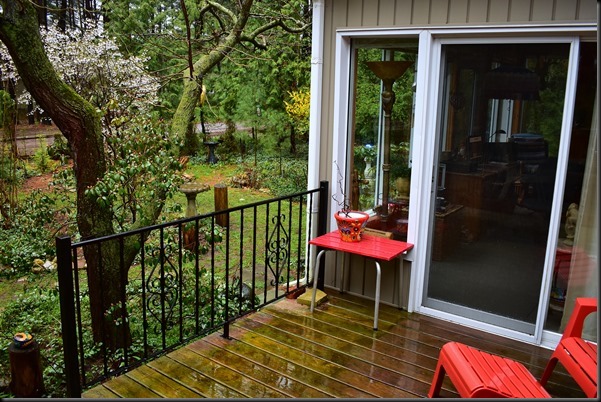 With this U.S., Syria, Korea, Afghanistan, Iran, Russia mess escalating I’ve eased back into watching TV news a bit trying to keep abreast of what’s going on and as soon as I determine the world has not been plunged into the throes of World War 3 just yet I snap the news off again.  What a hell of a mess we supposedly intelligent human beings are all in at the moment……..again!!!! 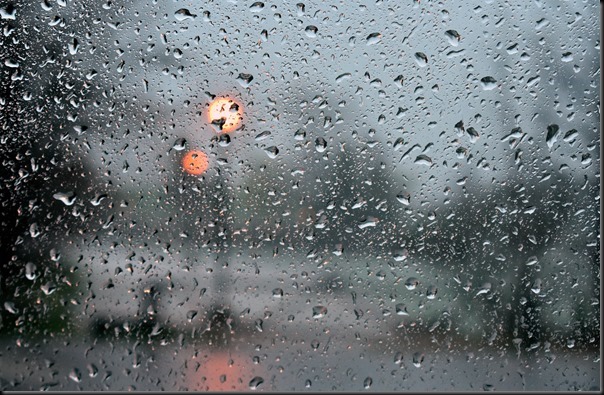 HARBOR LIGHTS ON A RAINY MORNING

GROANER’S CORNER:(( And lo, in the year 2017, the Lord came unto Noah, who was now living in the United States, and said:
"Once again, the earth has become wicked and over-populated, and I see the end of all flesh before me."
"Build another Ark and save two of every living thing along with a few good humans."
He gave Noah the blueprints, saying, "You have 6 months to build the ark before I will start the unending rain for 40 days and 40 nights."
Six months later, the Lord looked down and saw Noah weeping in his yard, but there was no ark.
"Noah! I'm about to start the rain! Where is the ark?"
"Forgive me, Lord," begged Noah, "but things have changed."
"I needed a building permit."
"I've been arguing with the inspector about the need for a sprinkler system."
"My neighbors claim that I've violated the neighborhood zoning laws by building the ark in my yard and exceeding the height limitations. We had to go to the Development Appeal Board for a decision."
"Then the Department of Transportation demanded a bond be posted for the future costs of moving power lines and other overhead obstructions, to clear the passage for the ark's move to the sea. I told them that the sea would be coming to us, but they would hear nothing of it."
"Getting the wood was another problem. There's a ban on cutting local trees in order to save the spotted owl."
"I tried to convince the environmentalists that I needed the wood to save the owls, but no go!"
"When I started gathering the animals, an animal rights group sued me. They insisted that I was confining wild animals against their will. They argued the accommodations were too restrictive, and it was cruel and inhumane to put so many animals in a confined space."
"Then the EPA ruled that I couldn't build the ark until they'd conducted an environmental impact study on your proposed flood."
"I'm still trying to resolve a complaint with the Human Rights Commission on how many minorities I'm supposed to hire for my building crew."
"Immigration and Naturalization are checking the green-card status of most of the people who want to work."
"The trades unions say I can't use my sons. They insist I have to hire only Union workers with ark-building experience.
"To make matters worse, the IRS seized all my assets, claiming I'm trying to leave the country illegally with endangered species."
"So, forgive me, Lord, but it would take at least 10 years for me to finish this Ark."
Suddenly, the skies cleared, the sun began to shine, and a rainbow stretched across the sky.
Noah looked up in wonder and asked, "You mean you're not going to destroy the world?"
"No," said the Lord. "The government beat me to it." 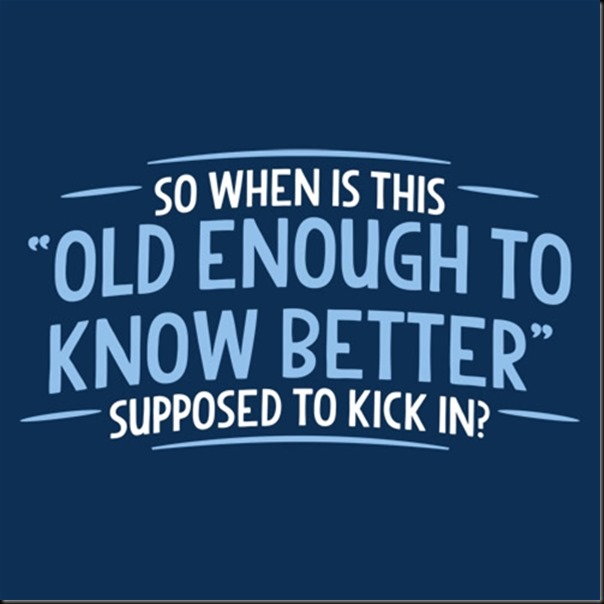