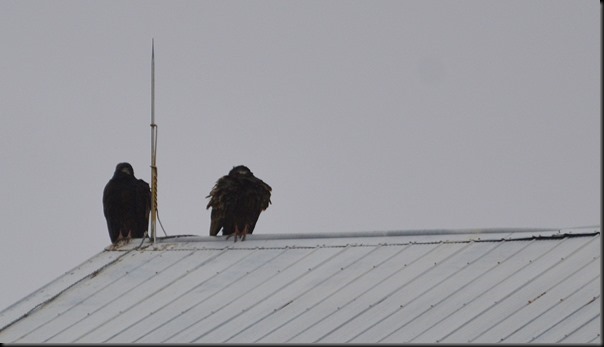 ONE OF ONLY 2 PHOTO I TOOK TODAY WAS OF THESE TWO BUZZARDS SITTING ON A BARN ROOF AND IT ABOUT SUMS UP OUR DAY……COLD, GRAY, AND DREADFULLY  DRAB

Met for coffee this afternoon with 1 of my 2 best friends.  Long time readers will remember me writing about our 4 and 5 hour coffee blow-outs over the years and today on our first one of 2017 we hung out in Clinton’s Tim Horton coffee shop for nearly 5 hours.  Never occurred to me until later that I was the only one who had a coffee though.  I’m talking about my good friend Jim Hagarty from Stratford Ontario of course and you can find Jim at Lifetime Sentences.  Jim has been in the Journalism field for as long as I have known him which dates back to late 1979.  Also an accomplished singer songwriter Jim for the second year in a row shared the stage recently in Stratford with Canada’s very own well known composer, songwriter, and touring folksinger Valdy. 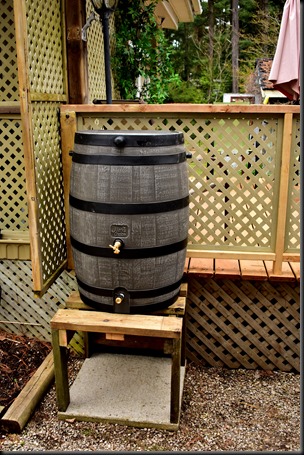 <<< BRUCE MADE THE WOODEN STAND AND I LEVELLED UP A CEMENT PAD UNDERNEATH IT THIS MORNING….BRUCE WILL BE BACK TO CONFIGURE THE DOWNSPOUT SHORTLY

Pheebs and I slipped up to Home Hardware in Goderich this morning to pick us up a new rain barrel which will sit alongside our deck extension to catch rain water from our roof which an eaves trough prevents from splashing down onto our deck.  We prefer watering our outside summer plants with rain water as opposed to our chlorinated tap water.  The plants prefer it too.

GROANER’S CORNER:(( At the cocktail party, one woman said to another, "Aren't you wearing your wedding ring on the wrong finger?"  The other replied "Yes, I am, I married the wrong man."