BACK TO THE GODERICH HARBOR AND BEACH AREA WE WENT 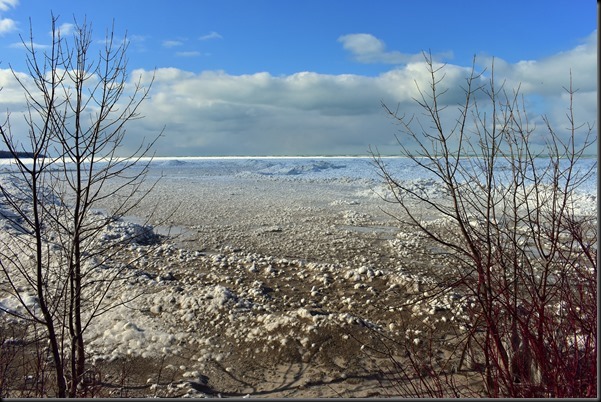 It was already after 9 when I hauled my sorry old sack of bones out of my recliner, hopped into the shower, and jumped into the Jeep.  Kind of a lazy hop and jump start to the morning.  Sun was shining so knew Pheebs and I had to get ourselves on the road and go somewhere.

Putt-Putting our way to Goderich I was  heartened to see some early signs of melting along the roadway edges.  Coffee and muffin to go at McDonalds and it was down to the harbor with us again.  Icy winds off the lake kept me in the Jeep but Pheebs did manage to get out and put up with the elements for about 5 minutes.  I was surprised at how much snow and ice had built up along the shoreline again in only a few days. 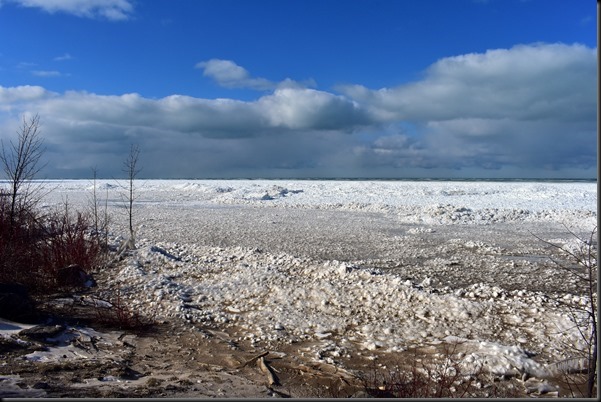 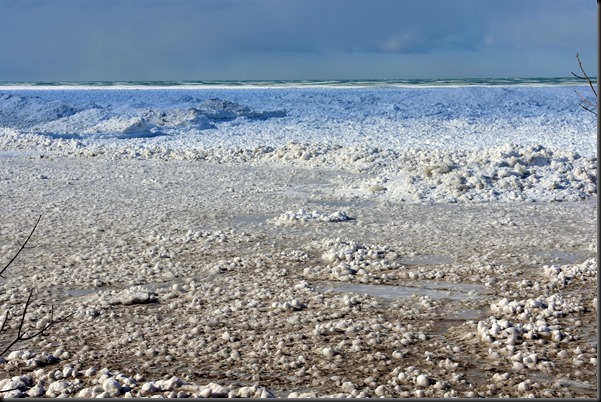 AMAZING HOW FAST ALL THAT WATER FROZE UP AGAIN 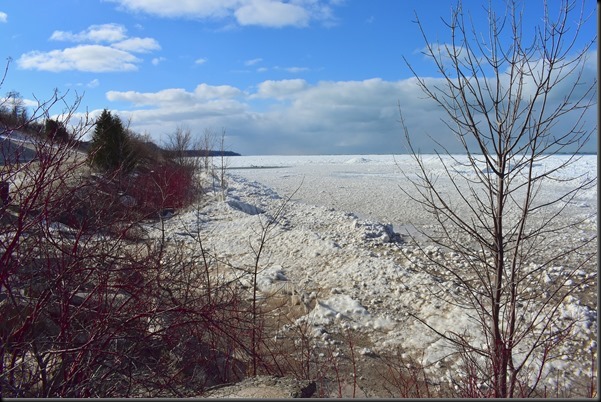 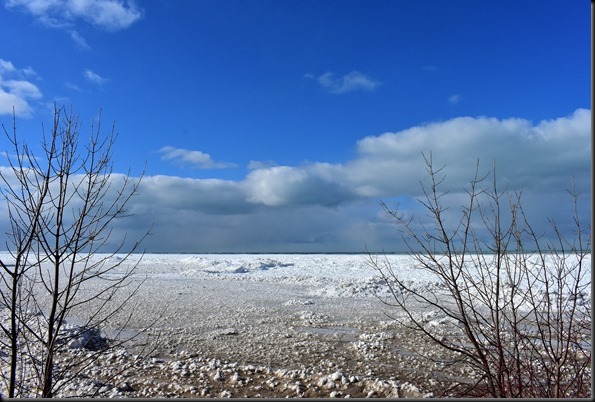 From the harbor’s south side we swung ourselves back up through Goderich and back down to the harbor on the North side.  Wanted to have a closer look at the two large lake freighters anchored there.  Despite the harbor being iced over again there seemed to be a lot of activity around the tug boat anchorages.  Probably getting things ship shape for the coming busy season.

DRIVING OURSELVES OVER TO THE NORTH SIDE OF THE HARBOR 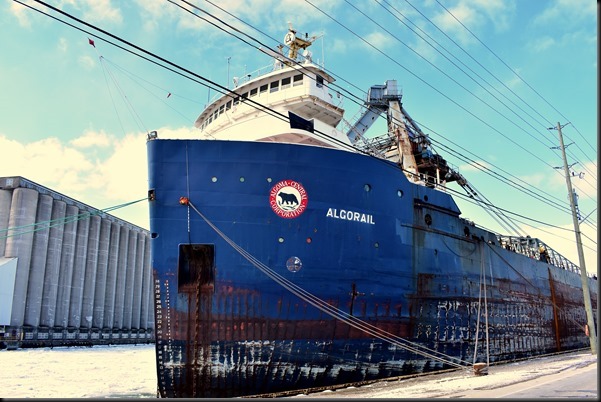 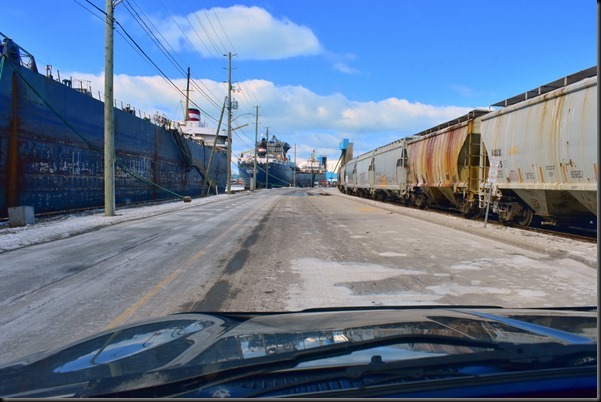 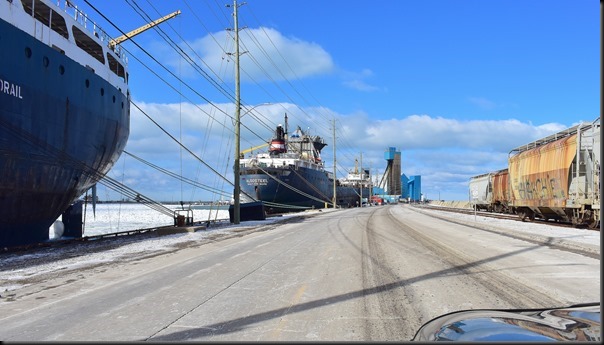 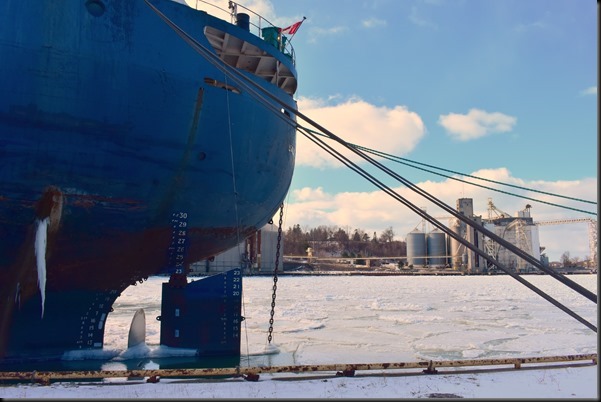 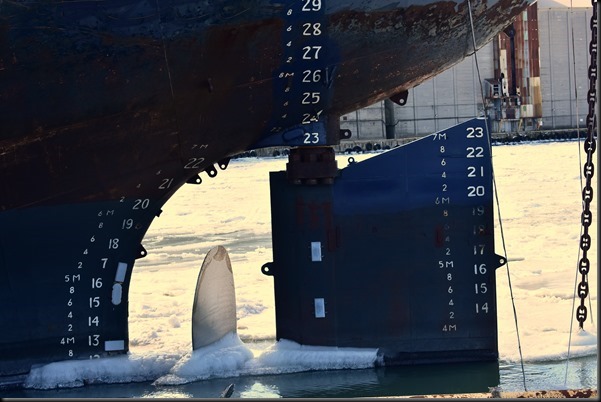 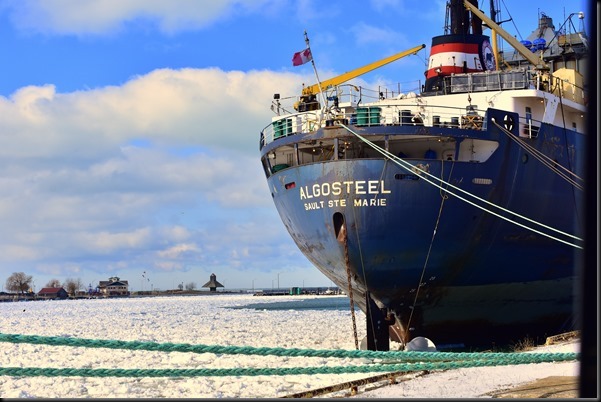 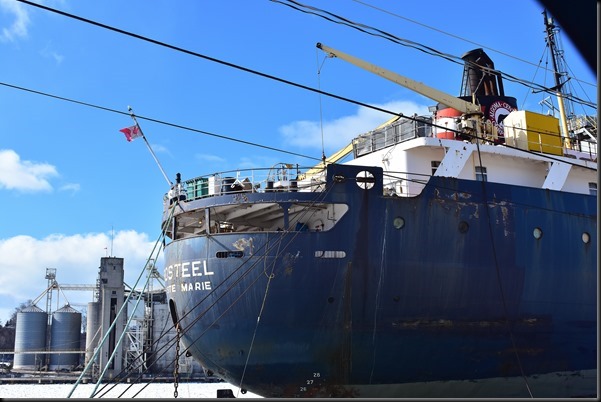 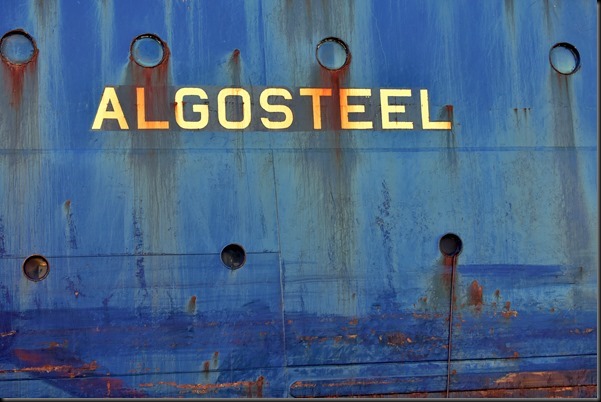 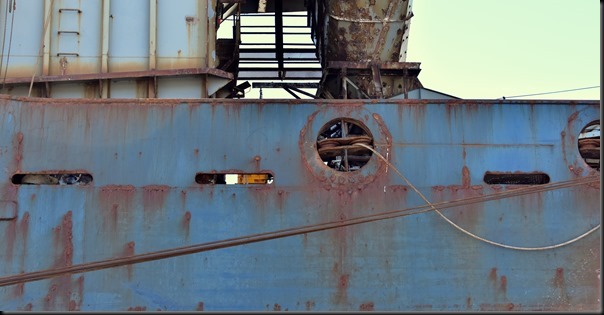 Picked up some gas and groceries and we were back home shortly after noon.  With warming sunlight  streaming through our big sunroom windows it was the place for me to be.  Each passing day now the March sun is getting stronger and how encouraging to see signs of snow melting on our south facing front porch and deck.  A few small chunks of snowy ice have even slide off the roof. 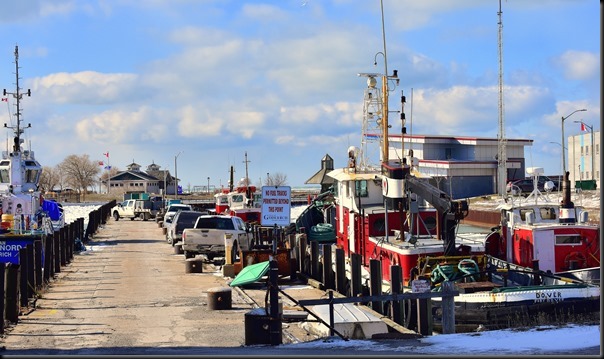 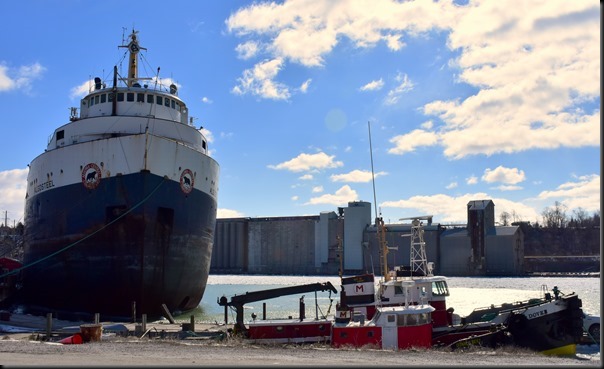 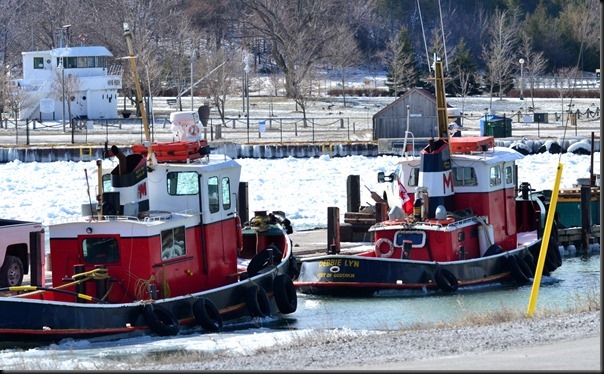 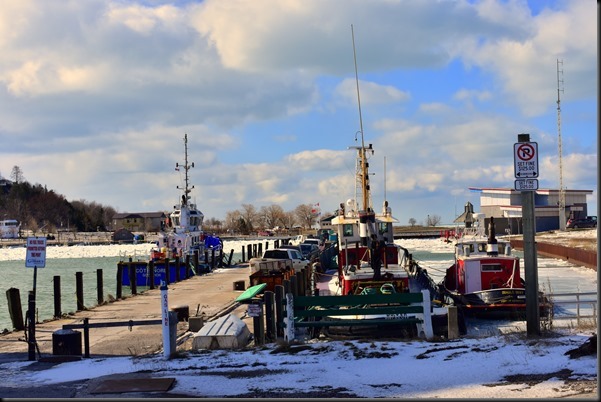 Hey Don the mystery of ‘the brown rusty thing’ in my blog header photo has been solved.  You will notice a white sided building atop a high cement block foundation immediately left of the big brown rusty thing.  Upper level is living quarters while below used to be a fish store.  We know the fella (Scott Austin) who owns that building and operated the fish store below.  In fact Scott is responsible for us having our sunroom.  He bought a really nice custom built log house years ago and on that house was a sunroom….that leaked like a sieve.  He offered that sunroom, 7 glass windows, 2 sliding doors and and everything that went along with it to anyone for $500 if they would simply dismantle it and take it away.  Well that somebody turned out to be us.  We had a fellow by the name of Mike O’Brian putting a new roof on our house at the time and we asked him if he would be interested in re-assembling this sunroom on the south side of our house.  He said he could do it and that is how our sunroom came to be.  Wished I could say I helped Mike with the roof and sunroom but he did it all by himself.  I think he might have known I could end up being more of a hindrance than a help. 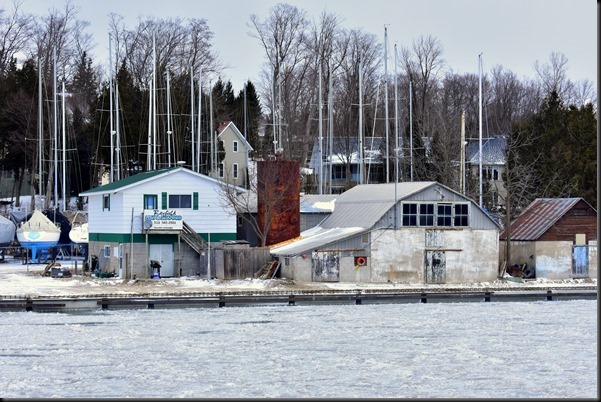 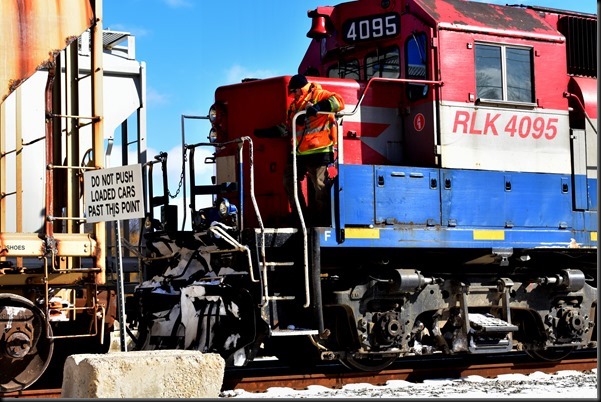 THIS DIESEL TRAIN ENGINE WAS IN THE PROCESS OF HOOKING ONTO A BUNCH OF RAIL CARS NEAR THE SALT MINE THIS MORNING…..DID YOU SPOT THE TRAIN MAN?? 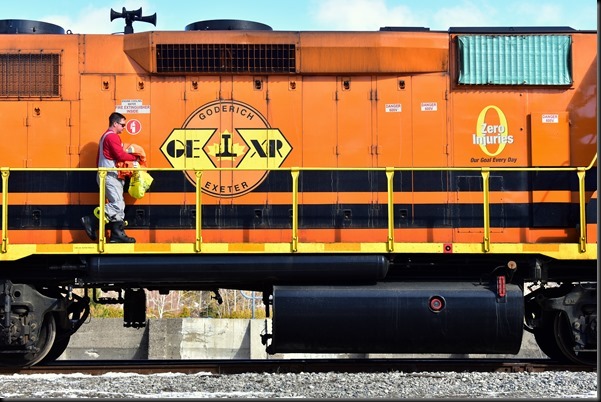 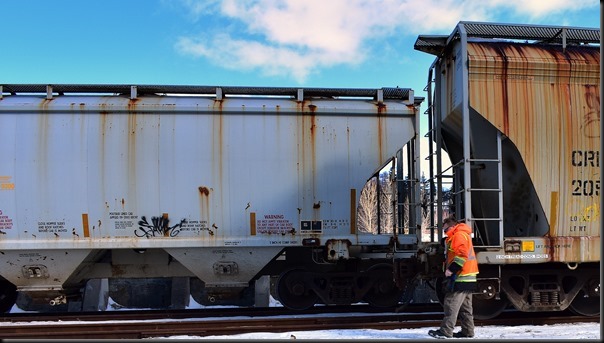 Oh ya, getting back to ‘the big brown thing’ in our header photo.  Kelly emailed Scott who owns the fish store building and asked him what that brown tank was used for.  Scott replied, ‘ It is an insulated tower that stored the ice, a large ice maker used to set on the top’!  Scott used a lot of ice in his fish business as did the local fishing boats that docked and still do dock there alongside the fish store.  The fish store is no longer in operation.  Scott Austin by the way now holds the position of Marsh Manager out at the Hullett Marsh. 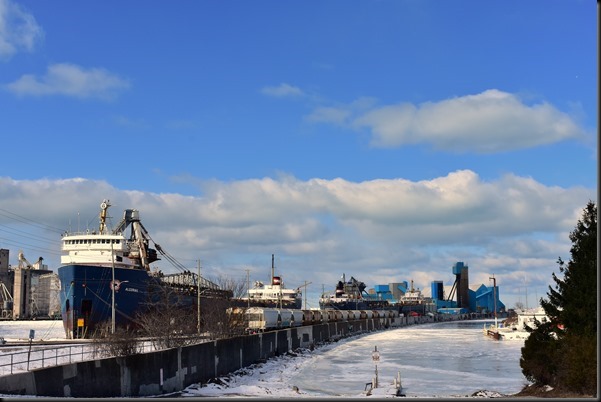 GROANER’S CORNER:(( Top 10 Signs You Are Too Old to Be Trick or Treating::

10. You get winded from knocking on the door.

9. You have to have another kid chew the candy for you.

8. You ask for high fiber candy only.

7. When someone drops a candy bar in your bag, you lose your balance and fall over.

6. People say, 'Great Keith Richards mask!' and you're not wearing a mask.

4. By the end of the night, you have a bag full of restraining orders.

3. You have to carefully choose a costume that won't dislodge your hairpiece.

2. You're the only Power Ranger in the neighborhood with a walker.

1. You avoid going to houses where your ex-wives live.

Forty-three percent of all Americans say that illegal immigration is a serious problem.
The other 57 percent said, "No hablo ingles."