GROCERIES AT OLSENS AND……WAIT A MINUTE, WHERE THE HECK IS OLSENS????

THE BAYFIELD BUNCH IS ON THE MOVE AGAIN AND KELLY HAS ON HER ALGODONES DRESS WHICH IS SHOWING IT’S TRUE BERGUNDY COLOR UNLIKE MY TUESDAY POST WHERE THE COLOR WAS SHOWING UP AS RED (KELLY WANTED ME TO STRAIGHTEN THAT OUT:))

When stepping out of the coach with Pheebs in the early morning darkness every day the first thing I do when opening the door is quickly scan the immediate area with my flashlight for Monsters then give the ‘all clear’ to Pheebs and she scampers out.  It’s very rare for me to turn on the outside light but I do carry a powerful flashlight just in case.  I much prefer the darkness with it’s host of stars overhead.  Although I have trouble seeing the small print on my computer screen I still do have excellent night vision for keeping an eye on the Pheebs.  Second thing I do when stepping out of the rig is to look up.  Stars = good:)) No Stars = Not so good:((  This morning was…..Good:)) 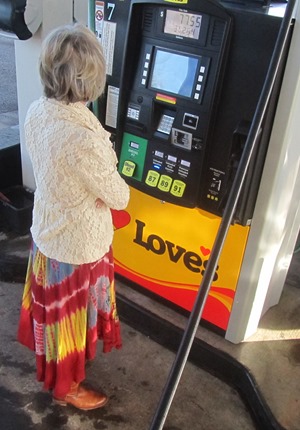 My new dentures are fitting fine so the decision was made to head out this morning in search of  new and old familiar scenery.  i was happy about that because I really wasn’t keen on going back to Algodones.  An OK one time experience but enough was enough with all those pushy vendors.  By 9 a.m. we had all our storf stowed away.  Storf??  Ya, stuff you store away.  You know…….Storf:))  Minutes later we had the wheels headed south down Ogilbie Road to Interstate 8 and made a left turn down the ramp into the east bound lanes of I-8 towards Yuma. 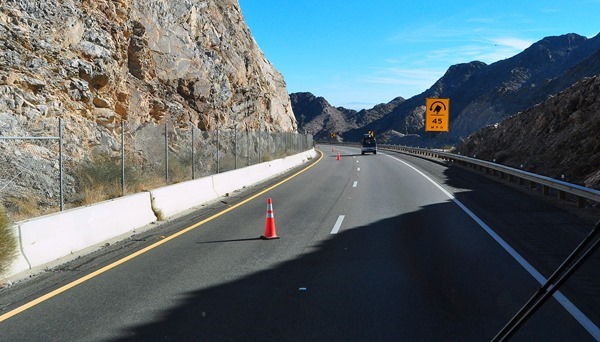 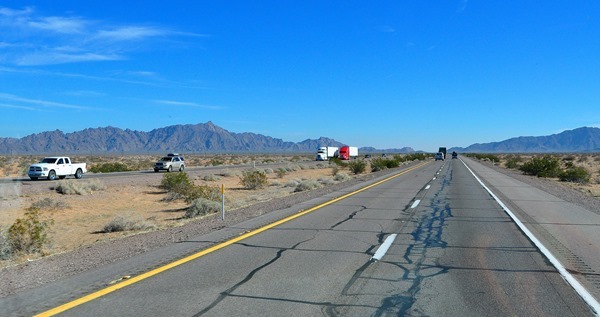 ABOUT HALF WAY BETWEEN YUMA AND GILA BEND 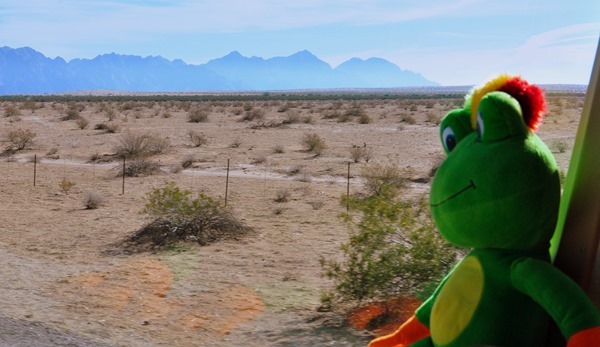 Always easy getting through Yuma as I-8 heads across the city’s north end.  Fuel stop at Loves netted us some propane, 2 Subs, 2 coffees, and a small box of Chester Chicken for later.  Without further adieu we exited Yuma’s east end between the Muggins and Lechuguilla  mountains out onto the flatter desert and charted a course for Gila Bend.  Nice day with blue skies, warm sunshine and no wind.  This is one of those long straight stretches of road that allows a feller if he can get his steering wheel set just right to snap on the cruise control and get up and go back to the galley and make himself a coffee and a peanut butter sandwich.  Maybe even a good old big one in the washroom if he feels the need:))

THE 3:10 OUT OF YUMA MOVING EAST IS HEADED IN THE DIRECTION OF PHOENIX

It is often uncanny how things sometimes occur in the RV traveling lifestyle and we had one of them this afternoon which occurred at a rest area about 30 miles west of Gila Bend.  We had just pulled in and rolled to a stop when a soft knock came to our side door.  Kelly was closest to the door and opened it a smidgen and right away recognized the person at the other end of the knock.  It was Diana from Life On The Open Road and she had recognized our rig pulling in.  She too was traveling from point A to point B and had stopped for a break as well.  I don’t recall having formally met Diana before but I do recall seeing her from a distance at Bloggerfest 2015.  Small world indeed and nice to briefly talk to you today Diana. 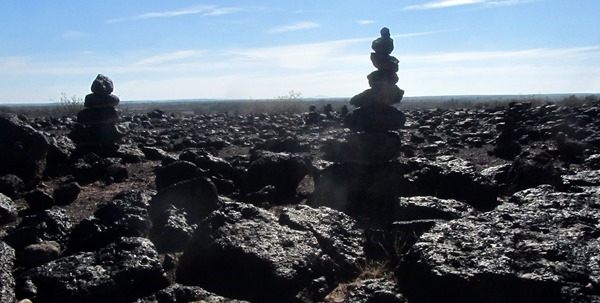 HEADING SOUTH FROM GILA BEND ON #85 THROUGH THE BARRY M GOLDWATER MILITARY RANGE….IT IS NOT UNUSUAL TO BE  BUZZED BY LOW FLYING MILITARY AIRCRAFT ALONG THIS HIGHWAY

Gila Bend is one of those ‘Oasis In The Desert’ places for RVers.  A growing crossroads kind of place in the middle of nowhere to take on water, fuel or propane, stock up the food larder and dump tanks.  Today we took on water and dumped a couple tanks before rolling out again this time heading straight south on highway 85 towards Mexico.  But Mexico was not our destination this time.  Olsens Market Place was our destination and is one of our favorite grocery stores in one of our favorite small Arizona towns in one of our favorite Arizona areas.  A few fellow RV boon-dockers will already know where we are and yes indeed we are in Ajo Arizona and of course camped out under the stars all by ourselves somewhere out Darby Well Road.  North end to be precise because that is where the visible Verizon tower beams out it’s best signal in our direction. 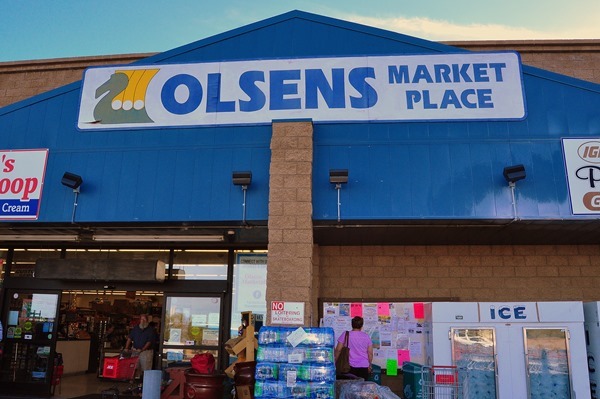 ONE OF OUR FAVORITE GROCERY STORES 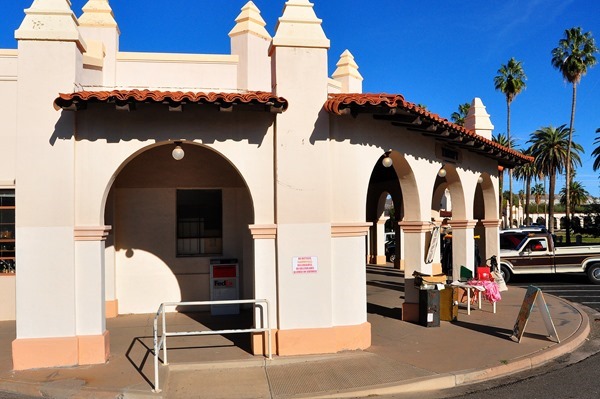 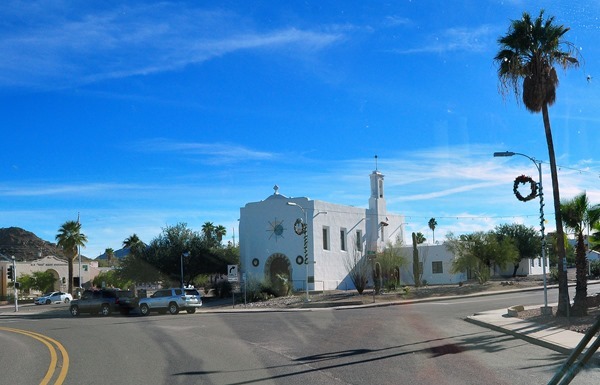 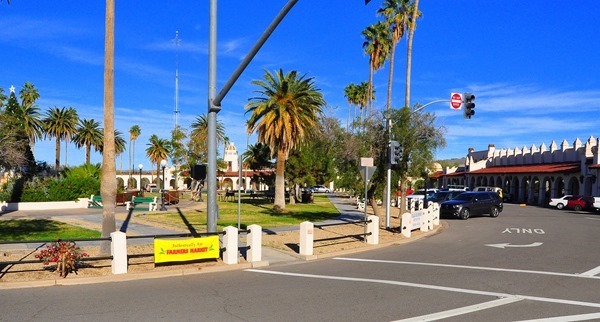 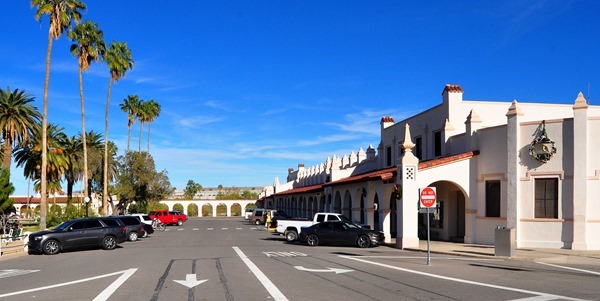 It was late afternoon when we happily returned to another one of those areas where we have many pleasant memories from our earlier traveling years.  It was here we met RV Sue And Her Canine Crew when we convinced her to come on over from Truth Or Consequences New Mexico to try her hand at some boon-docking.  The rest is history of course and RV Sue could now probably right her own book on her experiences and the RV boon-docking lifestyle.  And it all started right here on Darby Well Road west of Ajo Arizona.  And it was in Ajo that we first met the Grandpappy of all RV Bloggers……Tioga George his very self:)) 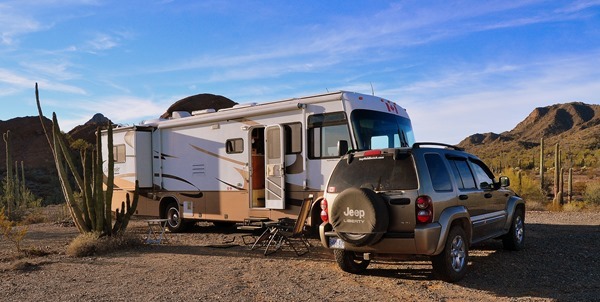 WE DO TRULY HAVE OURSELVES A NICE SITE HERE THIS TIME 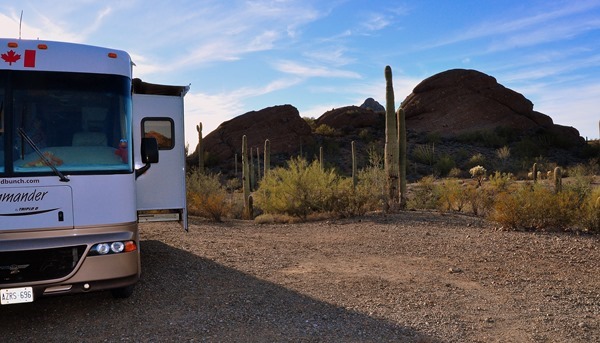 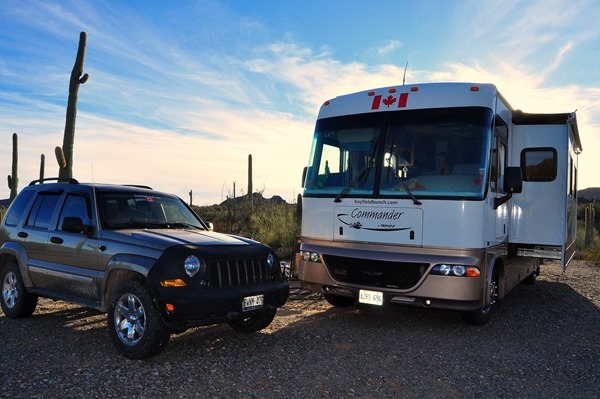 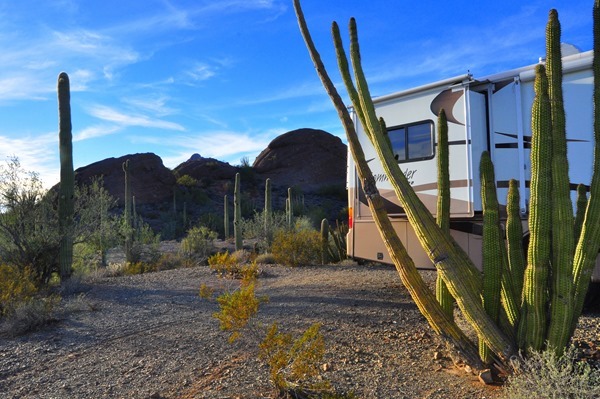 HOW NICE TO HAVE AN ORGAN PIPE CACTUS BESIDE US

If I remember correctly the final remains of Edward Abbey are somewhere just west of us in the Cabeza Prieta Desert.  Here’s a clue to his final resting place and be sure to read about his Death and Burial at the end of the Wikipedia article. 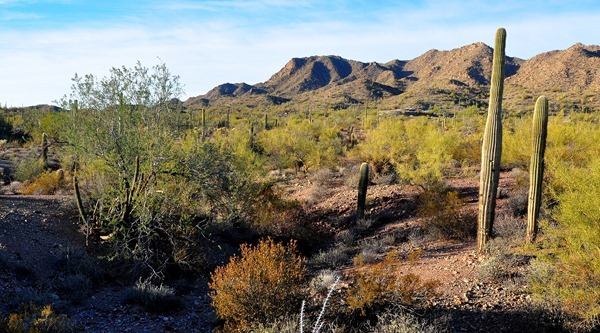 OUR SIDE YARD VIEW TO THE NORTH ABOVE AND SOUTH BELOW 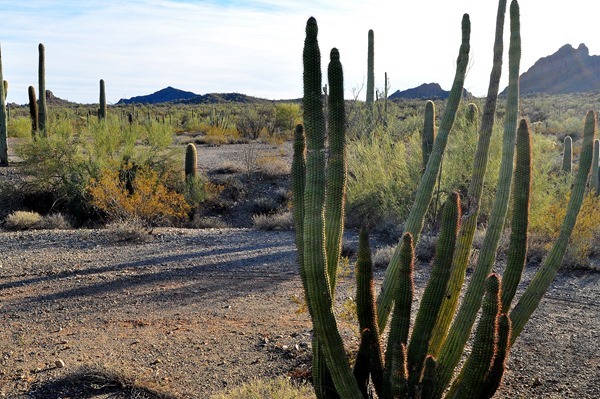 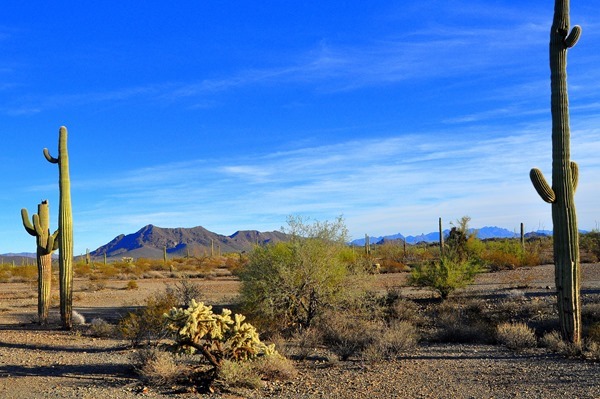 Again, can’t tell you how happy we are to be where we are and what makes it especially nice this time out here is that basically there is nobody here except for one small van camper we can see on a hillside about a quarter mile away.  We are parked right beside an Organ Pipe Cactus and surrounded by thousands of stately Saguaros.  It is this type of boon-docking we had loved so much years ago and have been so sorely missing since 2012.  So nice to be back doing what we so much like doing…………..:)) 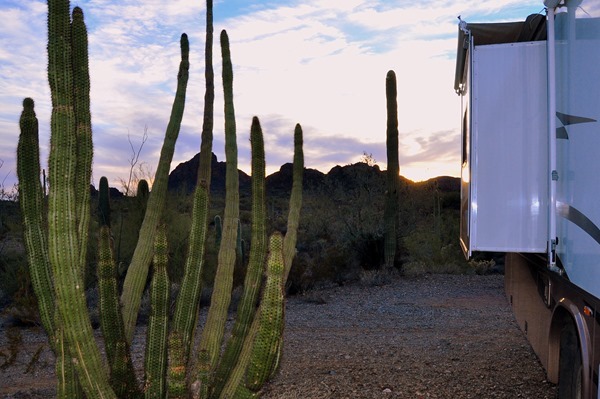 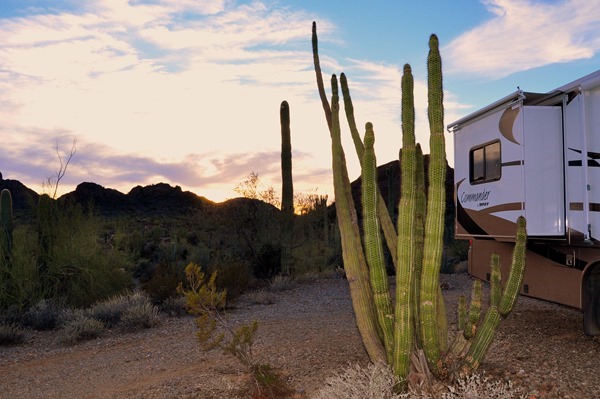 I know there are a lot of ‘do it yourself’ RV’ers out here so you might want to keep the following site on file because Steve from RVing: The USA Is Our Big Back Yard is one of those fellas who can and does do most of his own repairs and modifications whether it be to their 1996 Safari Serengeti Motorhome or sticks & bricks house.  Recently retired Steve is a very talented laid back fellow with an abundance of patience for fixing and modifying things.  Karen, talented in her own right writes the blog and takes the photos and has started the New Year off with 3 past Motorhome modifications which you can read about Here. 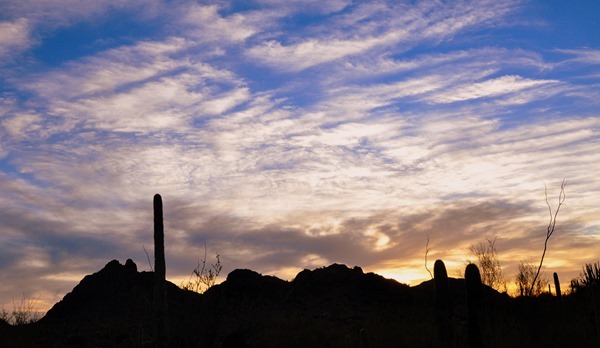 OUR CLOSEST AND ONLY NEIGHBOR TO THE EAST

NOTE THE CROSS ATOP THIS ROCKY PEAK

SUNSET AT OUR HOUSE TONIGHT

GROANER’S CORNER:(( Nursery school teacher says to her class, "Who can use the word 'Definitely' in a sentence?"  First a little girl says "The sky is definitely blue"  Teacher says, "Sorry, Amy, but the sky can be gray, or orange..."  Second little boy..."Trees are definitely green"  "Sorry, but in the autumn, the trees are brown."  Little Johnny from the back of the class stands up and asks:  "Does a fart have lumps?"  The teacher looks horrified and says "Johnny! Of course not!!!"  "OK...then I DEFINITELY crapped my pants..."