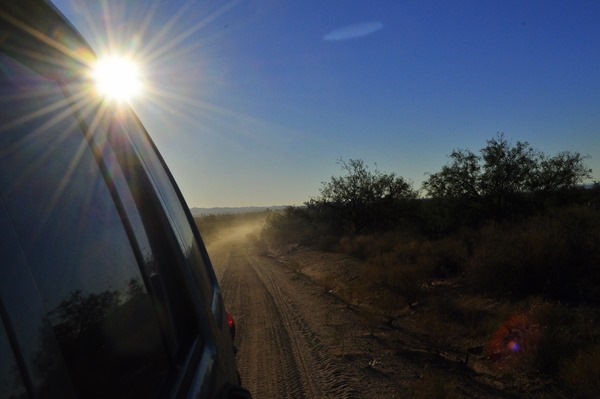 KICKING UP A BIT OF DESERT DUST THIS MORNING

Six thirty a.m. this morning found me in my recliner feeling much better and watching another episode of Corner Gas my all time favorite half hour situation comedy.  I have seen all the episodes over the years 2,3, and 4 times but the gang still brings a smile to my face every time I see them.  Our satellite TV provider is Canadian based Shaw Direct so we do get a lot of Canadian programing here in Arizona and Corner Gas was a Canadian Production. 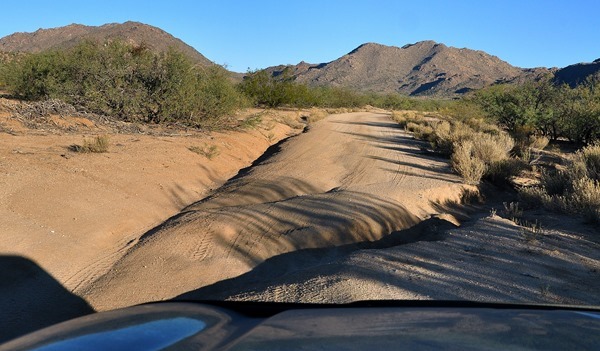 A GREAT FEELING BEING BACK OUT ONTO THE DESERT ROADS AGAIN 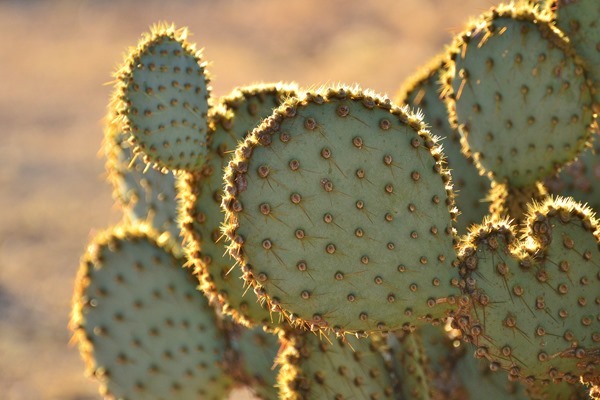 I had Pheebs in the Jeep by 8 and we headed out into the desert a block behind our house.  It is out here away from the paved streets and houses I prefer to walk with Pheebs.  Always quiet with Mother Nature providing us with all we want to see or hear.  No people noise.  We generally drive for a bit then get out and take ourselves for a walk and this morning we did what we generally do.  How nice to again be walking among the large Saguaros and green branches of the many Palo Verde trees.  Very slim chance of running into any people and for me that’s the best part of my walk.  Kelly prefers walking around the neighborhood earlier in the morning with Pheebs and chatting it up with a few folks along the way so it’s always a win/win situation for Pheebers because it often turns into a ‘two walk’ morning for her. 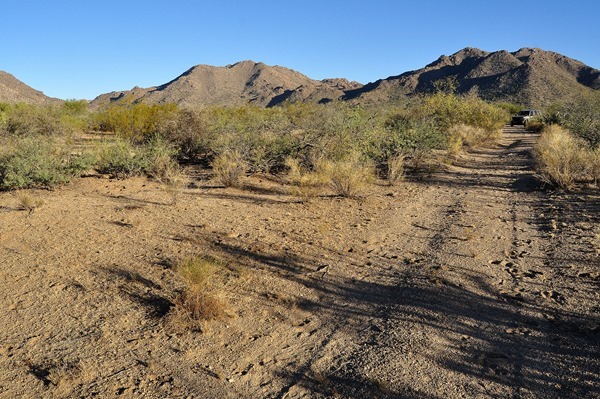 LEAVING THE JEEP PARKED UPPER RIGHT WE HEADED OFF WALKING 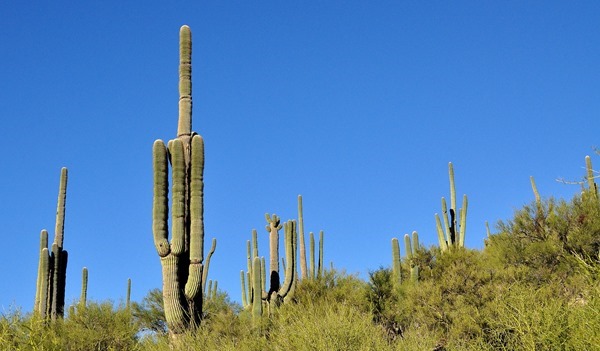 Not wanting to push my ‘feeling better’ too far we walked us around in a short half mile loop after parking the Jeep.  Only living thing we saw was a big black cow.  Because I was finally feeling better everything just looked so much nicer to me this morning.  When one is not feeling up to par often times their surroundings do not look as good as they normally do.  Well at least that’s how it is for me. 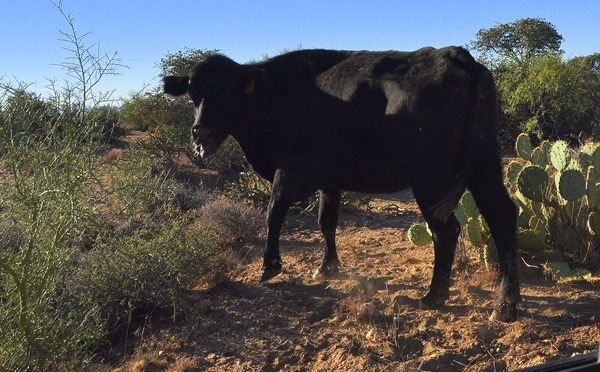 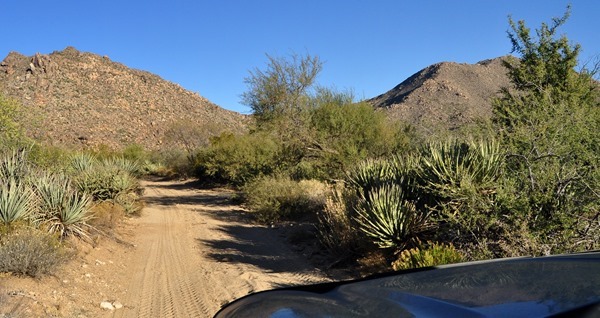 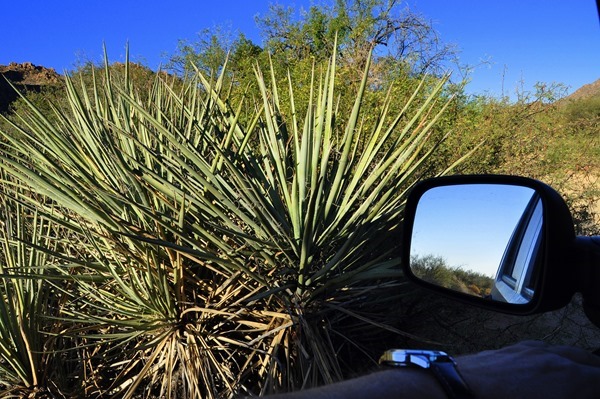 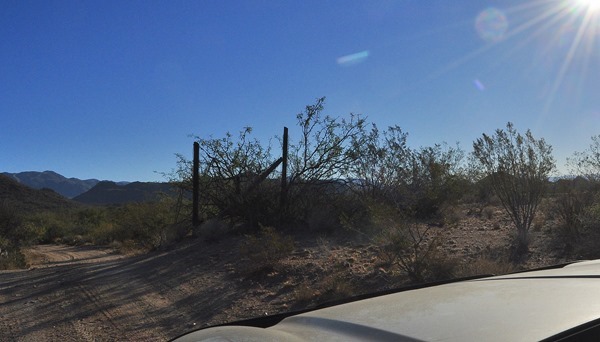 Back home I slipped Libby around to the south side of the house in the Big EEE’s cool morning shadow, hauled out my bucket and hose and gave her a good wash.  The Jeep was quite a mess with lotsa road grime on it after being towed over 4000 miles.  Always amazes me how good vehicles look after a simple wash.  Kinda like people I guess. 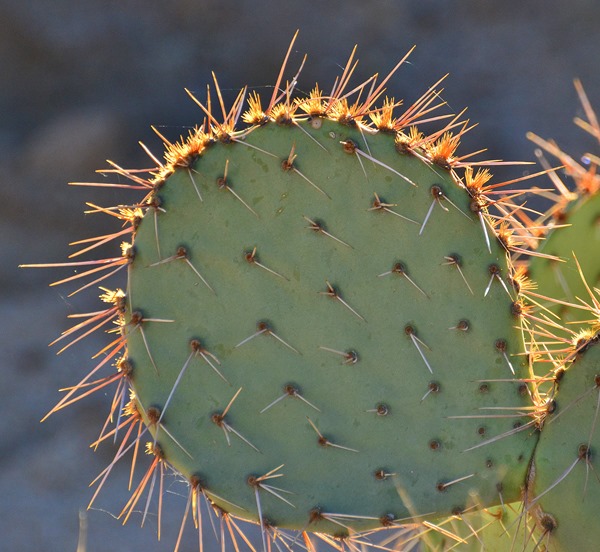 PURPLE CACTUS IN THE SONORAN DESERT

Sun was a tad warm for me to be plowing around outside doing yardwork so I kept myself in the nice cool house taking advantage of these relaxing days for right now. Did read for awhile on the front porch and actually dozed off for a bit waking up with my Kindle still in my hand open.  Finished that book about half an hour later.  It was about another one of Britain's fine young fighter pilots (Ginger Lacey) before, during and after the Battle Of Britain in the summer of 1940. 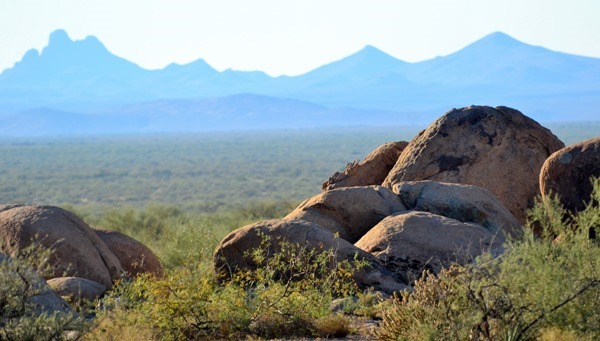 Found out this afternoon from John in St. Thomas Ontario, fellow RV Blogger Ivan and Jan Hogeveen in Bayfield that actress Janet Wright has died.  Janet played Emma Leroy on my favorite situation comedy series Corner Gas which I had just watched earlier this morning.  Thank you Janet for all the good times you brought us as Dog River’s Emma Leroy. 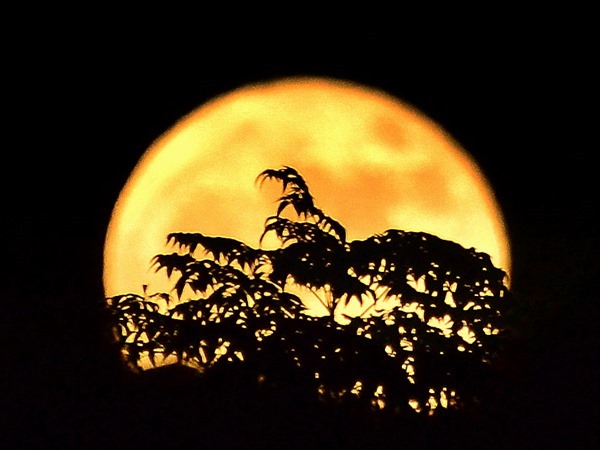 Sat on our front porch and watched the Super Moon come up over the Weaver Mountains for the second night in a row.  Just as awe inspiring as the Moonrise is also the same Moon setting in the West about 12 hours later.  I think most folks miss that. 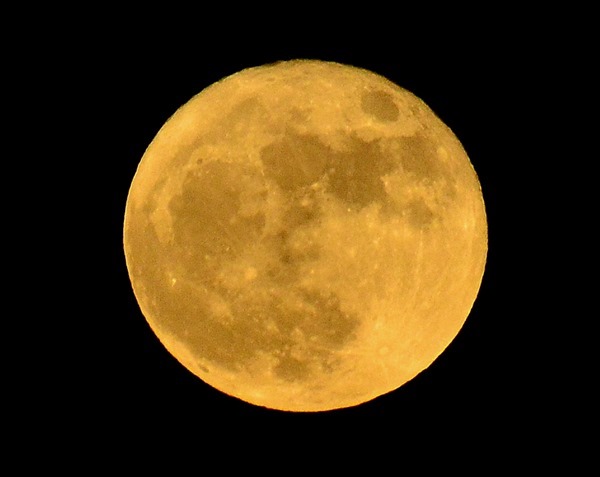 GROANER’S CORNER:(( Late one night, a mugger wearing a ski mask jumped into the path of a well-dressed man and stuck a gun in his ribs. "Give me your money," he demanded. Indignant, the affluent man replied, "You can't do this - I'm a United States Congressman!"  "In that case," replied the mugger, "give me MY money!"

A kindergarten teacher was observing her classroom of children while they drew. She would occasionally walk around to see each child's artwork. As she got to one little girl who was working diligently, she asked what the drawing was.  The girl replied, "I'm drawing God."  The teacher paused and said, "but no one knows what God looks like."  Without missing a beat, or looking up from her drawing the girl replied, "They will in a minute."