Had ourselves a warm Wednesday night which gave way to cooler morning temps brought in by a narrow traveling band of rain showers in the wee small hours of the morning.  And guess what.....I had previously made sure the shed doors as well as the Motorhome door was closed and the Jeep's windows wound up.  No scrambling around in my pajamas dodging buckets of rain the middle of the night.  Now how about that eh:)) 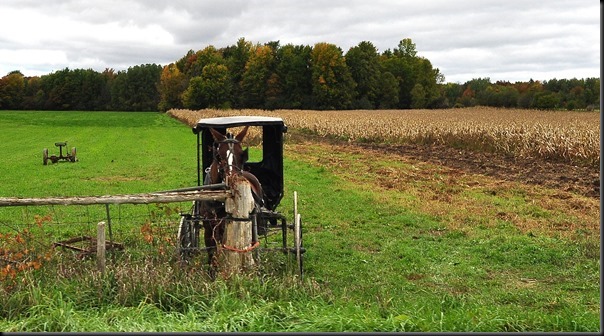 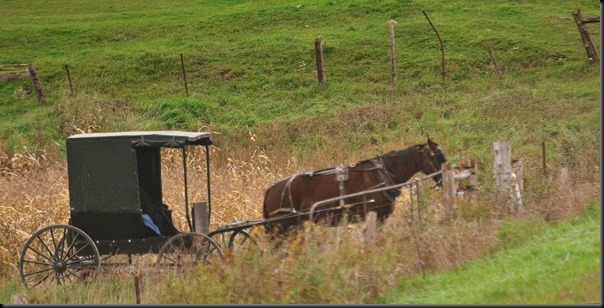 Neither threat of rain or cloud could keep Richard and I from our Thursday morning country coffee run and away we went for a two and a half hour drive through Huron Counties colorful Autumn scenery.  Always lots to talk about and again it was quality time well spent sorting out the complexities of life.  We'll do it all over again about 6 months from now when we once more hit the local country roads next year for our annual Spring coffee run catch up.  Richard is seven years older than me so by next Spring I know he’s gonna be a whole seven years more smarterer than me again too……….. 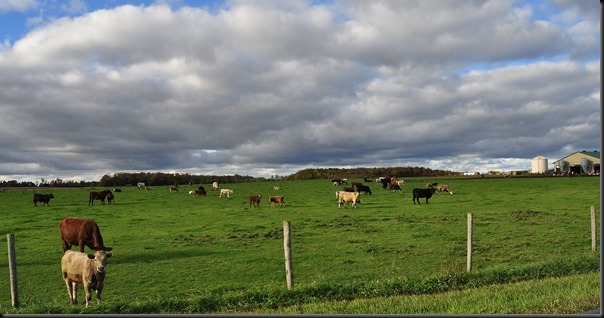 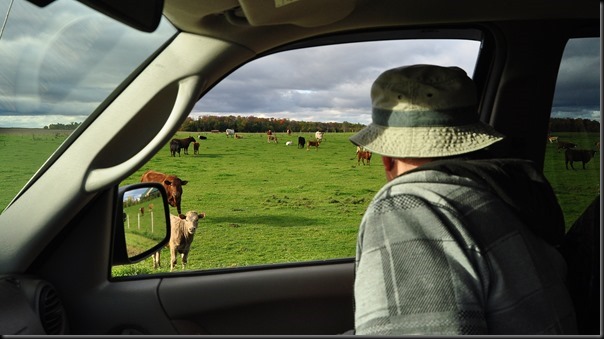 RICHARD’S CHATTING IT UP WITH THAT LITTLE WHITE FELLA 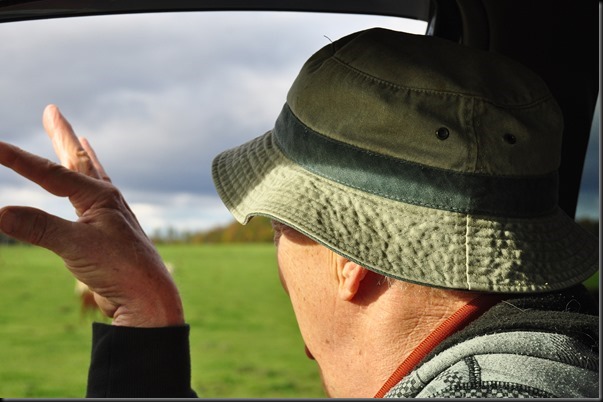 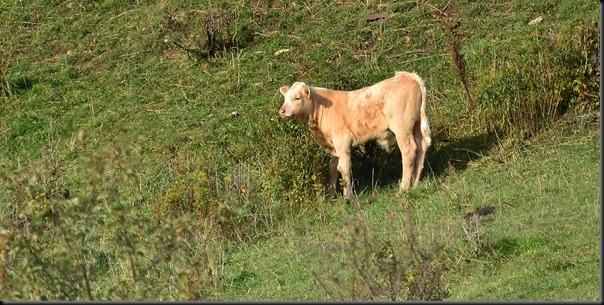 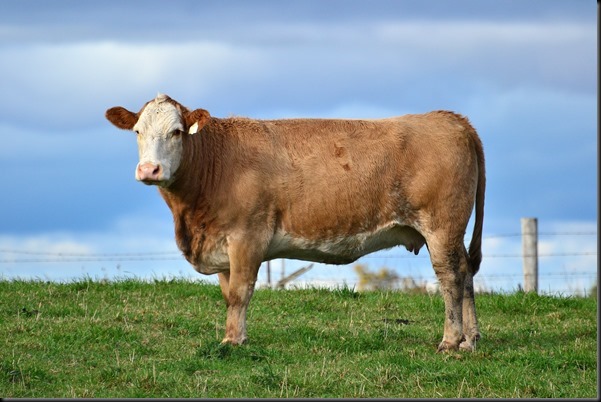 Our yellow pine needles were falling like snow in today's wind covering the ground in a golden glow like the very yellow brick road itself.  We're fast approaching the time of year when the weather can turn on a dime and become nasty  so we have our fingers crossed that we will be out of here and on our way before it happens.  We have been very lucky over the years regarding bad weather happening around our date of departure with the exception being last year when we got the heavy snow dump on October 19th that busted up our trees real good.  We did end today under mainly sunny skies but it sure felt cold at 50F compared to over 70 on Wednesday.  In the morning we plan to take the Big EEE for a short run to make sure all systems are go for our Tuesday launch………:)) 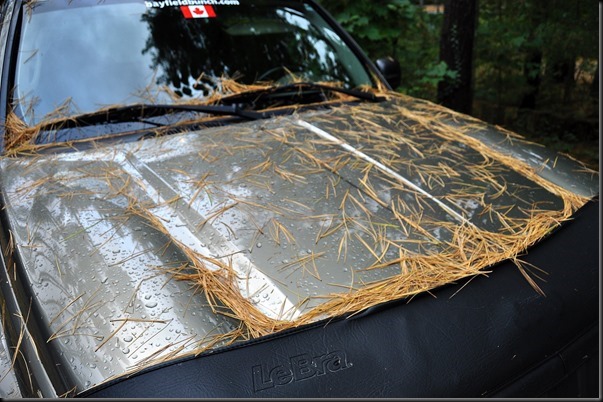 PINE NEEDLES ON THE JEEP FIRST THING THIS MORNING 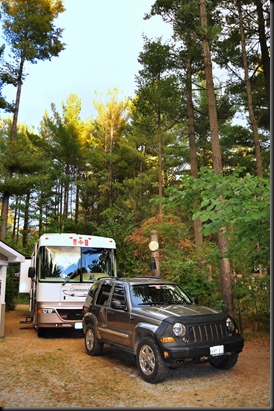 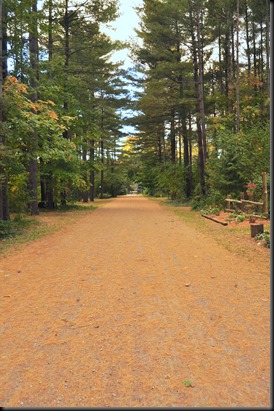 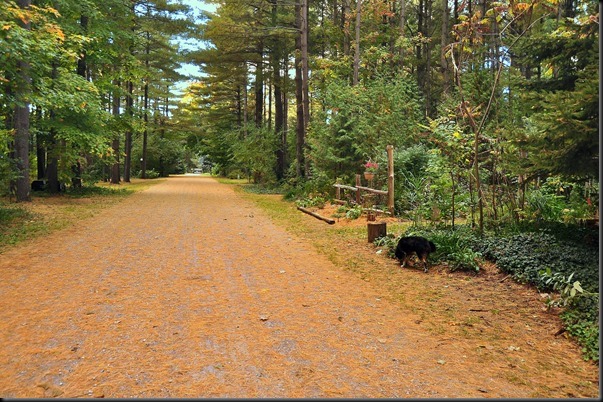 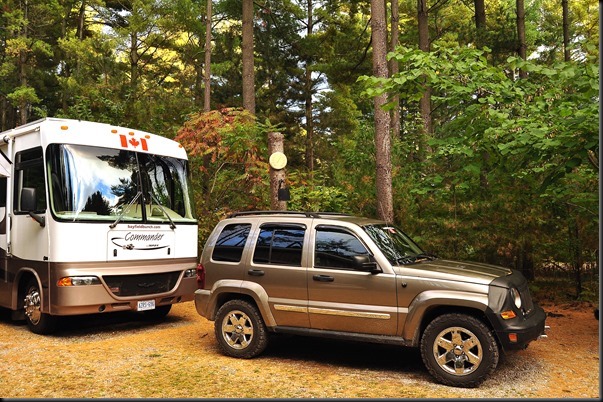 THE LATE AFTERNOON SUN HAD AN EERIE YELLOW CASTE TO IT

Dropped around to see our good friends and fellow RV Bloggers Chris and Caron this afternoon.  (Travels With CC And Dixie)  We didn't have far to go as C and C with their dog Dixie live in the same Park we do.  You may remember Caron and Chris moved into our Park just a year ago after reading my blog for a few years and deciding my writings about the Park perfectly suited their future plans.  I'm pleased to say they have been very, very, happy with their decision and it makes Kelly and I feel very good that it has worked out so well for them.  When I asked how they liked it here after one year Chris responded with a resounding ‘LOVE IT’.  Good stuff guys:)) 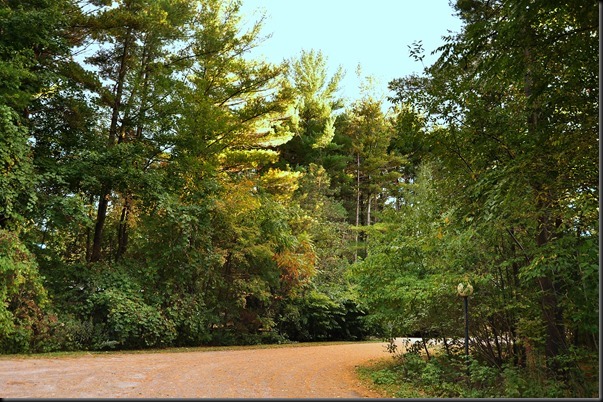 STANDING AT THE END OF OUR DRIVEWAY I AM LOOKING TOWARDS RICHARD AND GAYLE’S AND BECKHAMS PLACE THERE IN THE BIG TREES TO THE LEFT…FURRY FOUR LEGGED .BECKHAM AND PHEEBS ARE BIG PALS

GROANER'S CORNER:(( The owner of a drug store walks in to find a guy leaning heavily against a wall.  The owner asks the clerk, "What's with that guy over there by the wall?"  The clerk says, "Well, he came in here this morning to get something for his cough. I couldn't find the cough syrup, so I gave him an entire bottle of laxative."  The owner says, "You idiot! You can't treat a cough with a bottle of laxatives!"
The clerk says, "Of course, you can! Look at him; he's afraid to cough now!"

- I.R.S.: We've got what it takes to take what you've got!
- We are born naked, wet, and hungry. Then things get worse.
- Artificial Intelligence usually beats real stupidity.
- Hard work has a future payoff. Laziness pays off now.
- Better to understand a little than to misunderstand a lot.
- We have enough youth, how about a fountain of SMART?
- Change is inevitable, except from a vending machine.

At an Easter mass, at which some young ladies were to take their final vows to become nuns, the presiding bishop noticed two rabbis enter the church just before the mass began. They were seated at the back of the sanctuary and insisted on sitting on the right side of the center aisle. The bishop wondered why they had come but didn't have time to inquire before the mass began. When it came time for some announcements, his curiosity got the best of him. He announced that he was delighted to see two rabbis in their midst at the mass but was curious as to why they were present at this occasion where the young ladies were to become the "Brides of Christ." The eldest of the rabbis slowly rose to his feet and explained, "Family of the Groom."