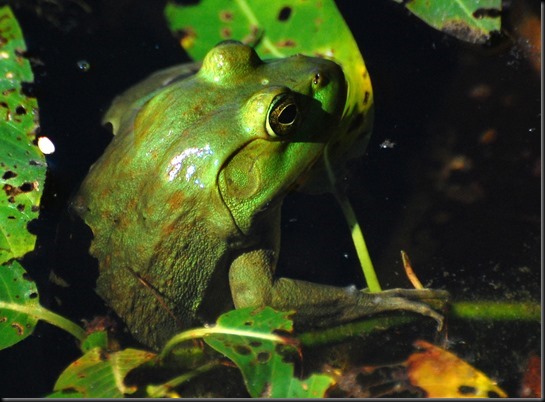 When we rented an old farm house in the country way back in 1995 I got in the habit of burning much of our paper product garbage in big old steel drums.  That habit stayed with us when we moved to Bayfield so we’ve gone through a few good burning barrels in the past 20+ years.  The barrels generally last about 4 years before finally disintegrating into a pile of crumpled rust and that is just about where our old 4 year burning barrel was when Kelly spotted someone selling a brand spanking new steel barrel. 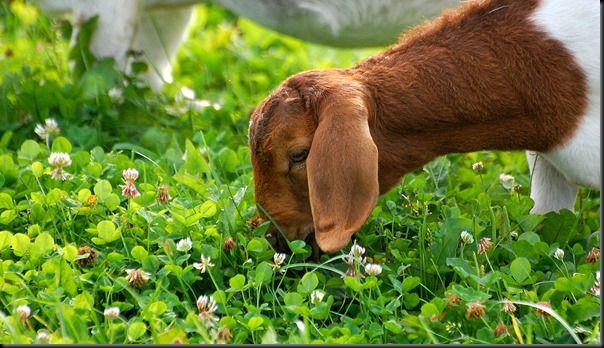 Kelly’s always spotting things for sale in the ‘buy and sell’ ads she frequents so this morning we headed off to Exeter Ontario with an address in hand.  The steel barrel was $20 and by 9 a.m. we were headed back out of Exeter with our new barrel aboard in the back of the Jeep.  Knowing there would not be much room back there we had the forethought to leave Pheebs home. 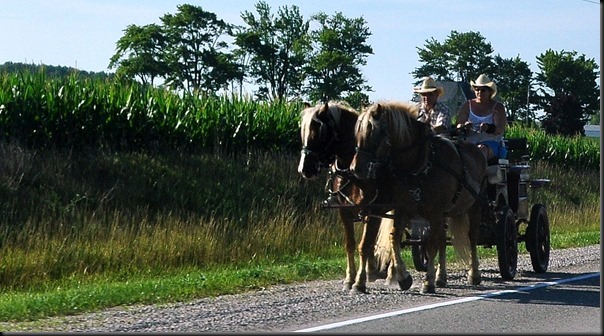 SPOTTED THESE FOLKS HEADING NORTH ON PARR LINE AND NO THEY ARE NOT AMISH AND CAN YOU TELL WHICH ONE IS OUR NEW BURNING BARREL BELOW:)) 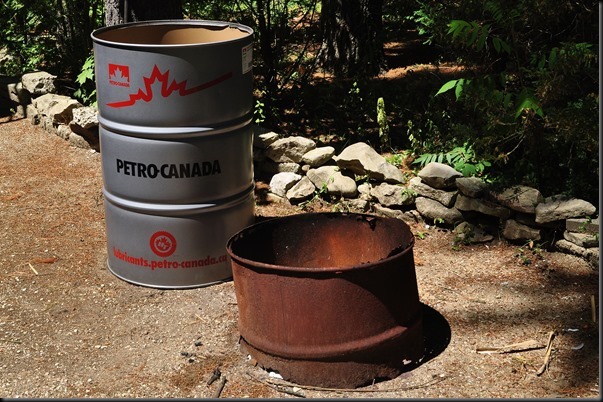 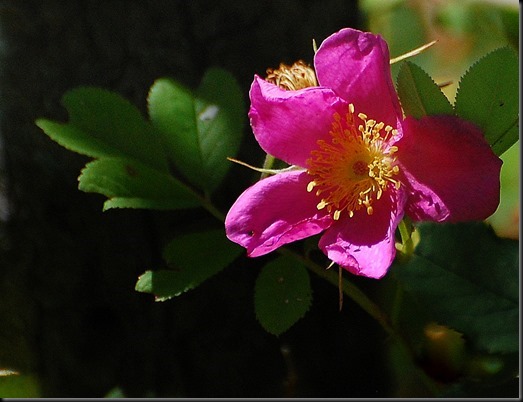 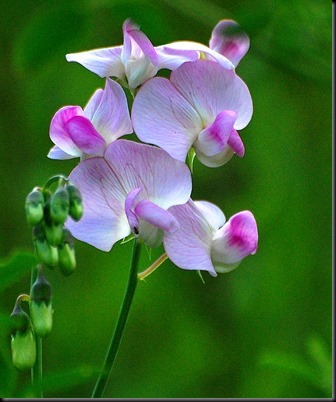 Kelly had a couple A&W breakfast coupons so we popped into Exeter’s A&W…..and found out something.  Little did we know not all A&W’s are the same.  We had just assumed they were.  The $5.99 coupons we had from our stack of flyers were only good for the Goderich area and in fact the A&W area coupons for the Exeter area were $4.99.  In Goderich it was 1 coupon for 1 breakfast but in Exeter we could have had two $4.99 breakfasts for 1 coupon.  But here’s the thing I like about the Exeter A&W the best……no loud ram jam jarring bee-bop noise coming out of overhead ceiling speakers.  Loud distracting music (if you can call it that) in restaurants has always been a big pet peeve of mine!!!! 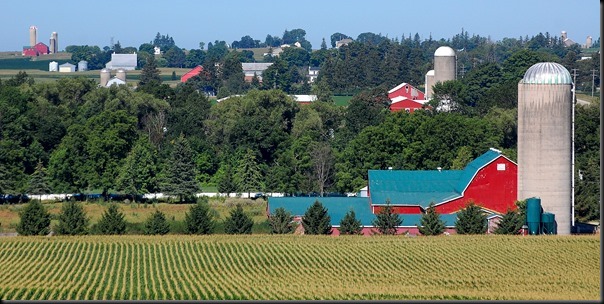 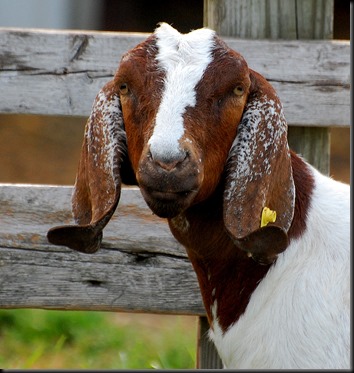 Well Merikay's latest post had my aging mind in overdrive this morning digging through a thick fog of heavy cranium matter searching my brains cobwebbed archives for the name ‘Wayne’.  Here is an excerpt from Merikay’s post which read, “A funny thing happened to me at a gas station in Whycocomagh, NS: (Nova Scotia Canada) Craig was driving the Alfa, and as is our routine, I hopped out when he pulled into the station to verify where the diesel pump was and to guide him in. There were other cars at the pump, so I was just waiting our turn when a gentleman in a red shirt, who was filling up at the other side of the pump island, said: “I’m glad you enjoyed the Hopewell Rocks.” What? Who was he? I quickly ran through my memory of people I had met in recent parks and at the Rocks, and came up empty. I did not recognize him, so I asked: “Who are you?”His name was Wayne. He explained he had read my blog, and knew Al from Bayfield!  Wow, small world!  What are the odds that I would meet someone who had read my blog, at a gas station in Nova Scotia?  Small world.  Love it”!……..Well after reading Merikay’s post you can imagine how many times I have been trudging through the morass of still functioning brain cells trying to switch on a lightbulb memory of someone named Wayne.  Was this person a reader of my blog or have I actually met him at some point in my life.  I did know a lot of guys in my mid 60’s Navy days on the East coast but also knew it wouldn’t be anyone I met on my solo VW camper van journey to the east coasts New Brunswick, Nova Scotia, or Prince Edward Island sometime in the mid 80.s  I never met or spoke to anyone all the time I was down there with the exception of the very helpful garage fellow in Bridgewater NS who replaced a long broken gas line linkage line in my VW van one day.  In fact I think I wrote a post about that but of course it too is buried somewhere deep in the vaults of my blog archives as well.  Did a ‘word’ search but couldn’t come up with anything.  So Wayne, whoever you may be……..I send you a big Hello tonight:))

Here’s a question we have been asked a number of times over the years and just a few weeks ago we were asked it again,…… “how come you don't do any Canadian side trips in the RV from Bayfield during the summer”??……….(this is an excerpt from a past post of mine) Several reasons for this with the first one being financial.  We came to the conclusion several years ago that expensive travels in Canada during the summer would stretch us too thin.  Unlike the South-western United States with it's large availability of free BLM lands to stay on for RV'ers like ourselves Canada has no such thing or if they do they are very few & far between.  Traveling in Canada during summer months means expensive & crowded RV Parks & neither Kelly or I have any interest in traveling that way.  Back in 06 when we first ventured out traveling down into the States we realized within a month on the road that our RVing dream was going to be over before it barely got started if we couldn’t figure out a way to travel cheaply & not have to stay in costly crowded RV Parks.  In 08 we went solar, embraced the boon-docking lifestyle & have never looked back.  If we could comfortably travel in Canada using our favored boon-docking ways we would definitely have us a second look at some summer travel plans.  Where would we like to go??  Kelly has never seen Canada’s East coast so I’m thinking if we could somehow swing it some day we would head for New Brunswick, Nova Scotia, Cape Breton Island and the Cabot Trail, Prince Edward Island, and maybe Newfoundland.  I myself have traveled to all of these places except Newfoundland.  Oh noooooo……… did I just go and put an east coast Nova Scotia/Florida travel idea in my head for this Fall………………… Oh Geeeezzzzz 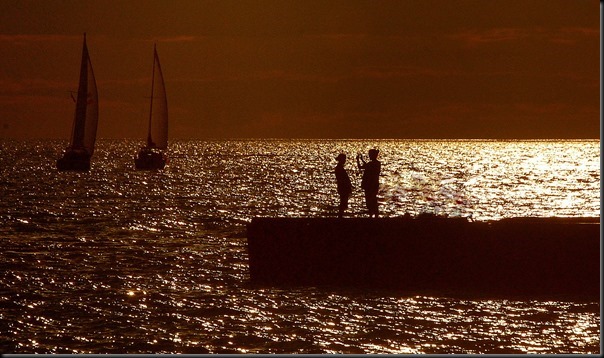 GROANER’S CORNER:(( Once there was a little boy that lived in the country. They had to use an outhouse and the little boy hated it because it was hot in the summer and cold in the winter and stank all the time. The outhouse was sitting on the bank of a creek and the boy determined that one day he would push that outhouse into the creek. One day after a spring rain, the creek was swollen so the little boy decided today was the day to push the outhouse into the creek. So he got a large stick and started pushing and quickly toppled it into the creek and watched it float away. That night his dad told him they were going to the woodshed after supper. Knowing that meant a spanking the little boy asked why.  The dad replied, "Someone pushed the outhouse into the creek today. It was you, wasn't it son?"  The boy answered yes. Then he thought a moment and said, "Dad, I read in school today that George Washington chopped down a cherry tree and didn't get into trouble because he told the truth."  The dad replied, "Well, son, George Washington's father wasn't in the cherry tree."