CANADA GEESE GLEANING A RECENTLY HARVESTED WHEAT FIELD….GLEANING MEANS to gather (grain or the like) after the reapers or regular gatherers.

By 8 a.m. it was already too warm for me to be scratching around in the dirt of our front yard flower bed.  Now that the last of our big pine trees are down I'm anxious to get our yard re-vamped and put back together but until this miserable heat wave is over I'm probably not going to get it done as quickly as I had hoped. 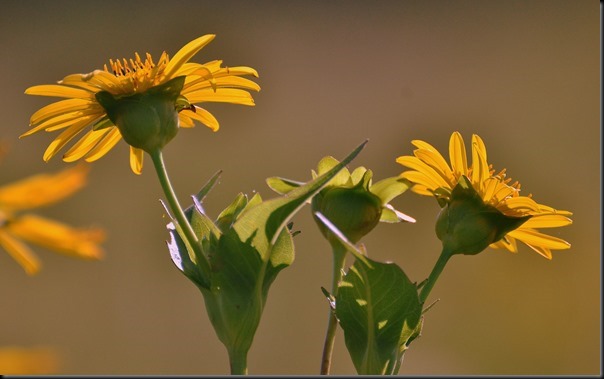 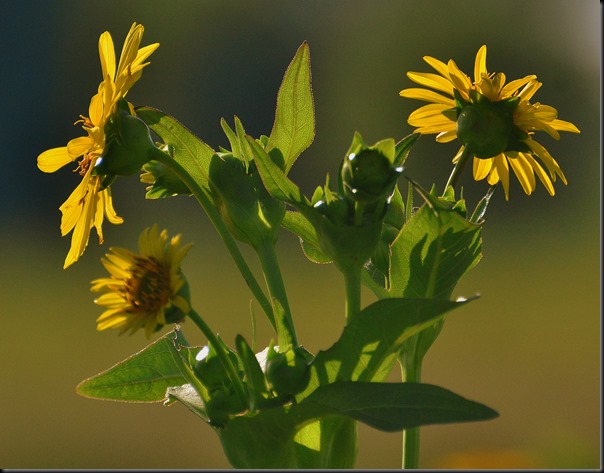 Pheebs and I picked up our usual route out of Clinton with a short leg stretch at the Hullett Marsh.  It was already too hot for a walk plus biting Deer Flies were out in full force looking for hapless victims.  We kept ourselves in the Jeep and kept moving.  Our travels took us past a tree I had blogged about back on June 17th of this year.  On that roadside tree was the most amazing fungus growing at that time and I took several photos of.  I also blogged the location of that tree if any area folks might want to drive out and have a look at it.  (Fabulous Fungus) Coming along the road this morning I saw the tree ahead but did not see the fungus jutting out from it’s east side.  Oh-Oh I thought.  Stopped and walked down through the ditch to have a look and there lying on the ground was the tattered decaying remains of that beautiful fungus.  Had the fungus just become too heavy and finally pulled off the tree or………and I sure was hoping it wasn’t my next thought.  Had someone read the location of the fungus in my post then come out here and smashed it off the tree.  I want to think not but I am a realist and that thought is a real possibility.  Needless to say I felt bad about it if indeed that is what happened. 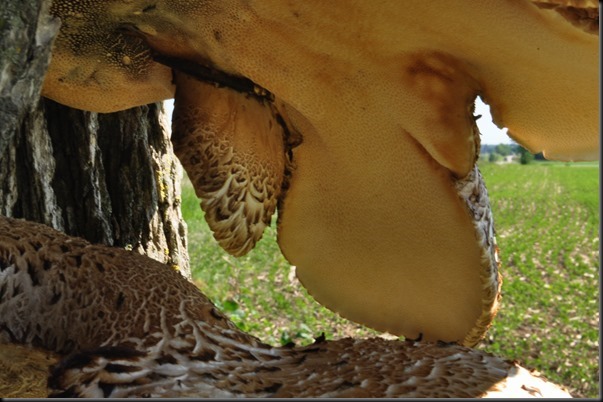 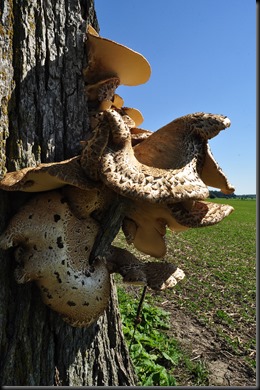 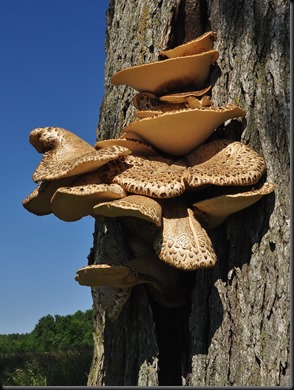 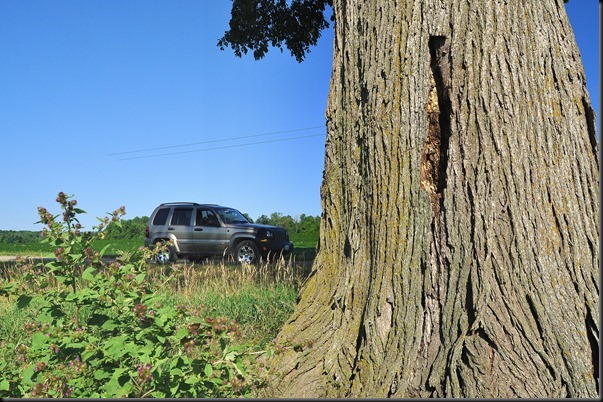 THIS IS ABOUT ALL THAT’S LEFT OF THAT ENCHANTINGLY BEAUTIFUL FUNGUS:(( 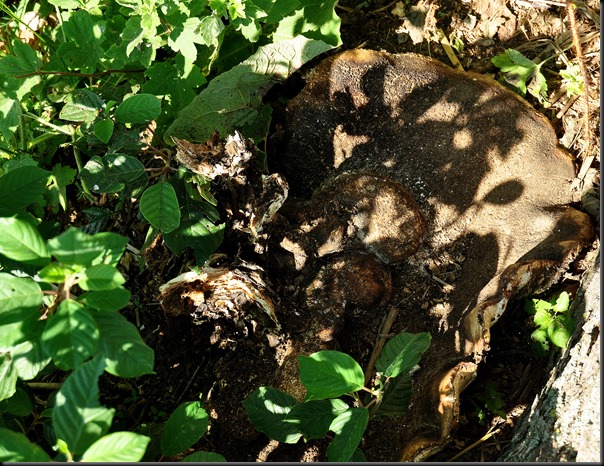 Heading southward east of Londesborough Ontario I noticed a narrow country road that did not look familiar to me despite driving all these area roads for years so we headed on down to have us a look see where it went.  We had gone about a quarter mile when I saw a pick-up truck parked up ahead at what appeared to be a dead end.  It was.  Noticed a fella standing by the truck and figured it was probably the land owner.  Noticed he had a dog with him so pulled up behind in preparation of turning around.  Turns out it wasn’t the land owner but a resident of Londesborough.  Of course Pheebs noticed the dog as well and that set off a bunch of excited barking.  Pheebs made it clear we weren't going anywhere until she had at least got out to say Hello so with that I turned the Jeep off and opened the door.  And that's how we met Murray and his dog this morning.  What followed was nearly an hours conversation & the doggy guys playing together after they got to know each other a  bit.

LOADING UP SOME BIG STRAW BALES ON A FLATBED 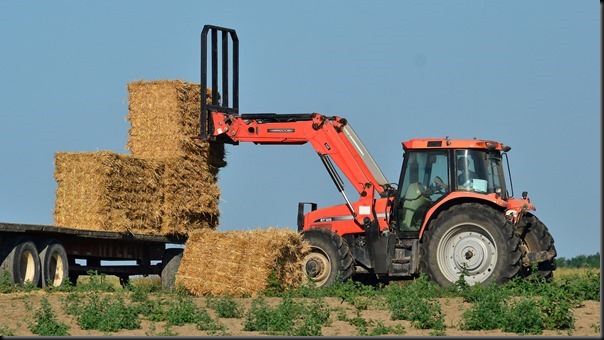 It quickly became apparent Murray and I had a lot in common as we chatted about the Hullett Marsh where he is a trail maintenance volunteer.  Talked about our love for animals and especially our dogs.  Talked about the outdoors, area trails, starry night skies, some RV travels and Arizona.  Like myself Murray is a big Corner Gas fan and that right there just up and cemented a good friendship.  A few stories from days gone by had us connecting on many similarities and especially our ages with Murray being 75 and myself 71.  We talked about memory problems and sure enough by the time I arrived home today I had forgotten Murray's dog's name.  It's not often I feel comfortable meeting strangers anymore but this morning's chance encounter with a like minded fella left me with a good overall feeling.  And Murray if you happen to be reading this is my post for the morning we visited Corner Gas and Dog River:)) 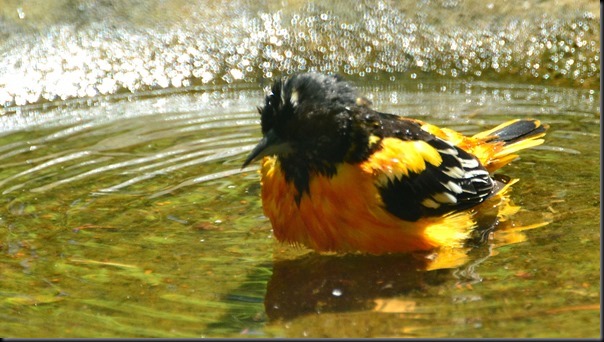 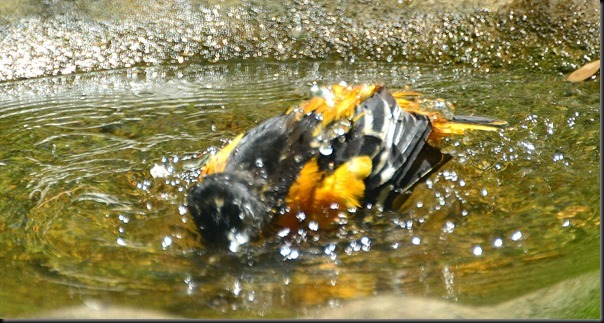 Pheebs and I were home before noon and that was pretty much it for the day.  Just too hot for me to be outside.  Going to be another sweltering one tomorrow so doggy and I will probably have to get out early again before cooler night air gives way to more heat and humidity.

LOOKS LIKE A LITTLE ‘GOOSE SMOOTCHING’ GOING ON THERE

GROANER'S CORNER:((  Hugh came into the office an hour late for the third time in one week and found the boss waiting for him.
"What's the story this time. Hugh?" he asked sarcastically. "Let's hear a good excuse for a change." Hugh sighed and said, "Everything went wrong this morning. The wife decided to drive me to the harbor. She got ready in ten minutes, but then the ferry didn't turn up. Rather than let you down, I swam across the river, ran and climbed all the way up and over the mountain range, borrowed a bicycle and cycled the last 20 miles through torrential rains just to get here to this office." "You'll have to do better than that. Hugh," replied the boss, disappointed. "No woman can be ready in ten minutes."

The Associate Minister unveiled the church's new tithing campaign slogan last Sunday: "I Upped My Pledge So Up Yours.”

For those of you who have children and don't know it, we have a nursery downstairs.

This being Easter Sunday, we will ask Mrs. Lewis to come forward and lay an egg on the altar.

A - Because he saw the phone bill.