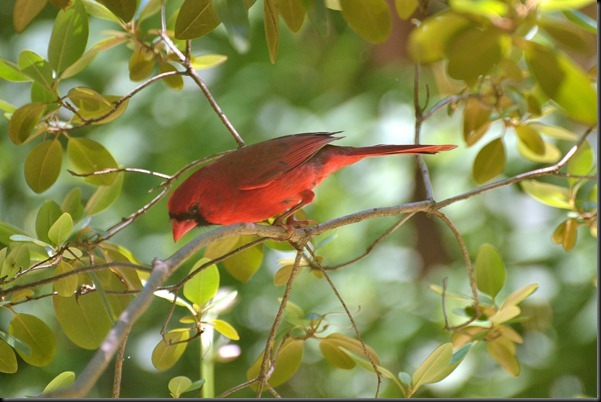 Hadn’t planned on heading off anywhere this morning but all that quickly changed when I heard the sound of an approaching truck.  Any sound other than the quietness of an occasional passing car in our Park is always cause for folks to hurriedly get out of their chairs, part the curtains and inquisitively peer out to see who’s going by.  Air was still cool enough for me to be outside doing a bit of raking in the front yard when I heard the distinctive sound of something bigger than a car.  Parting a few shrubs I peered out and saw a big blue truck with a big blue tank on the back.  ‘Yikes’ I knew right away what was about to befall us as the truck ground to a halt close to our house.  Whenever someone sells their home in the Park it is the responsibility of the seller to see that a certain obligation is met and I knew this big blue truck with the big blue tank was here to fulfill someone’s obligation alfight.  It was the Honey Wagon aka Septic Tank truck and it was here to empty our neighbor’s septic tank.  Not wanting to be around for that possible bit of stinky business I immediately swung into action scooping up the Pheebs along with my cameras and we were off out of the Park like a herd of Turtles in a cloud of Heifer dust.

A WHOLE GOL DARNED GANG OF GRACKLES ROLLED IN THIS MORNING

A LOT OF GRACKLE CACKLE GOING ON HERE 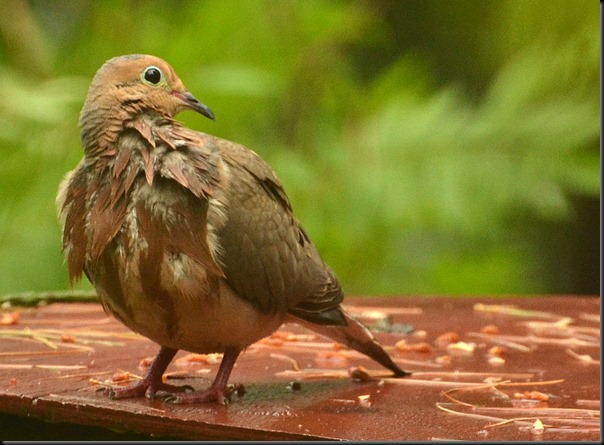 LOOKING A LITTLE BEDRAGGLED AFTER A RECENT RAIN 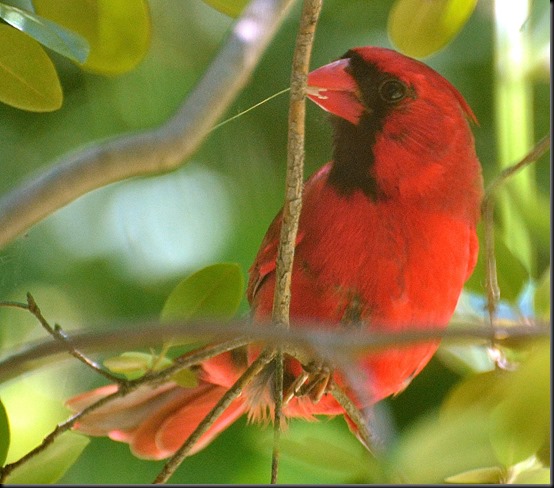 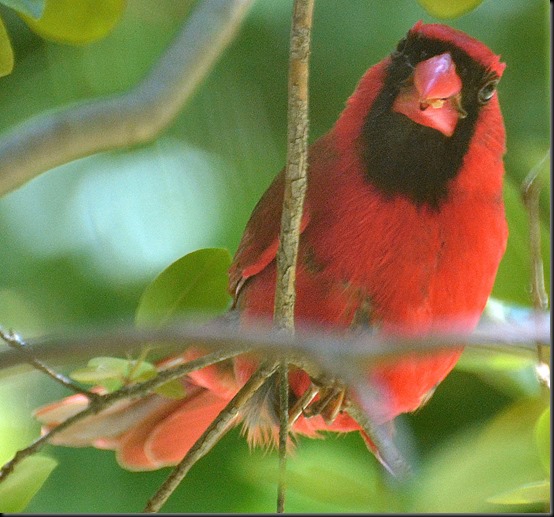 Heat warnings were issued for our area first thing this morning and already by 8:30 I knew it was going to be a very unpleasant hot muggy day.  As it turned out we had us the hottest day of the year so far and tomorrow is predicted to be even hotter.  We managed well for awhile though with all 4 windows down on our country drive until about 10 when all the windows had to be cranked up and the Jeep’s A/C cracked on.  We were home by 10:15 and headed into the cool house.  Kelly had gone to Goderich with a list of errands.

SPOTTED A BUNCH OF BUZZARDS ON A BARN ROOF THIS MORNING 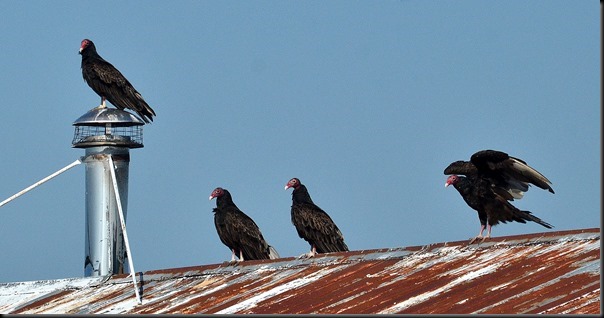 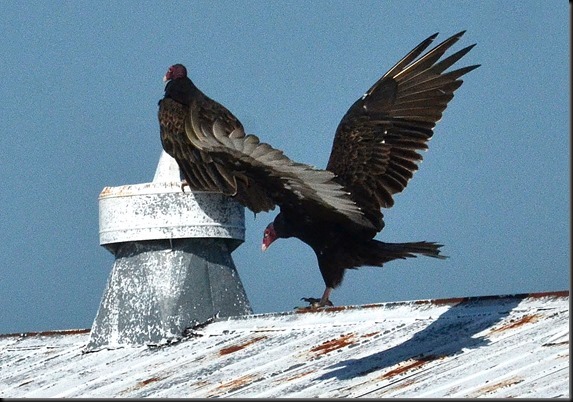 HEY GUYS CHECK OUT MY ONE LEG LANDING 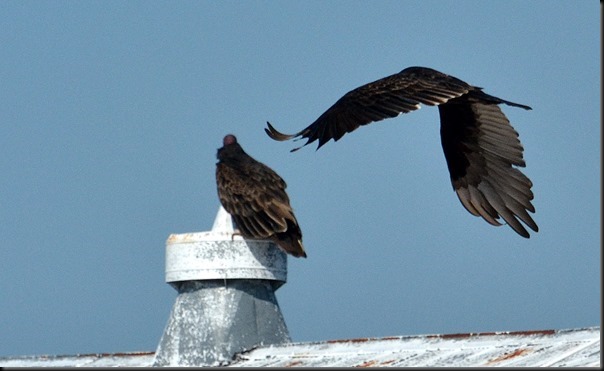 ‘YOUR A BUZZARD BETTY NOT A BAT’!! 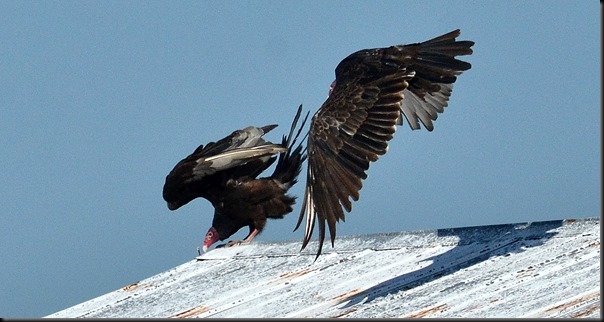 ‘YA’ALL COME BACK NOW YA HERE’
Jim the tree cutter guy was on the job when we got back and had himself high up in the bucket working on tree number 5.  And tree number 5 was a biggy with a lot of branches on it’s top third.  Another very logical reason for getting some of these leaning trees down is simply a safety factor.  The type of pine trees we have here are not strong trees and with most of their growth at the top what happens is that during heavy winter snowfalls or ice storms those long pine bough branches become heavily laden with ice and snow and can break off.  That ice & snow adds a lot of weight to the top of the tree and with the slightest touch of wind that top third of the tree sometimes snaps off and down it comes.  I’ve seen that many times here in the Park over the years. 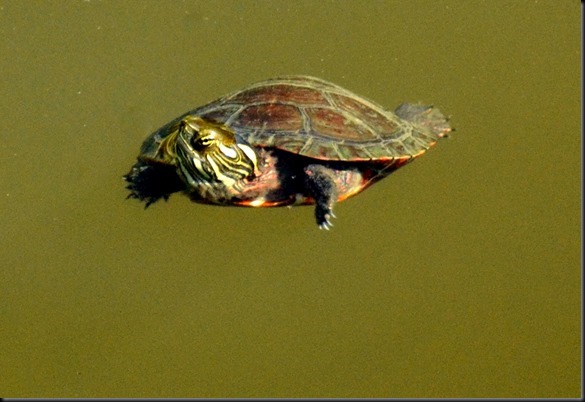 WHO SAID TURTLES CAN’T FLY……..WE SOMETIMES STOP AT BRIDGES FOR A LEG STRETCH AND THIS MORNING I SPOTTED THIS LITTLE PAINTED TURTLE FELLA LEISURELY FLOATING ALONG IN THE CREEK 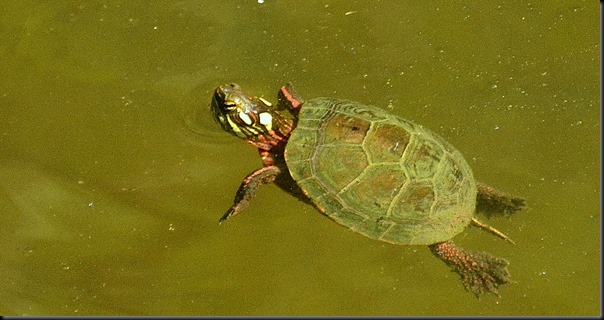 A CUTE LITTLE DICKENS HE IS 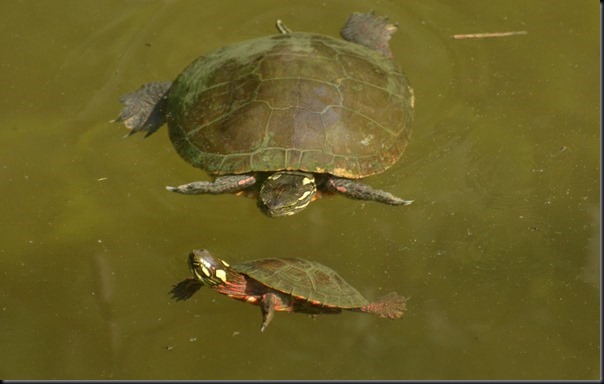 THEN HIS MOM SURFACED TO SEE HOW JUNIOR WAS DOING 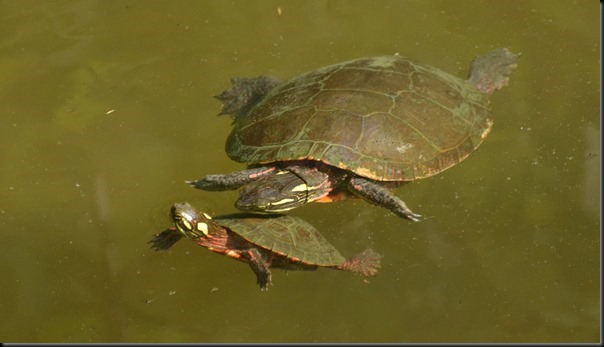 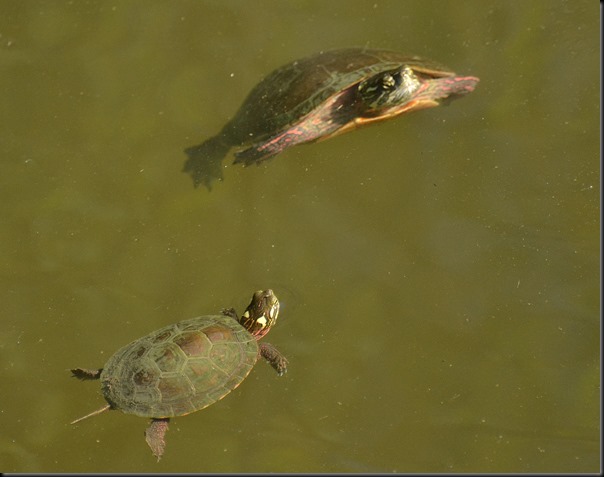 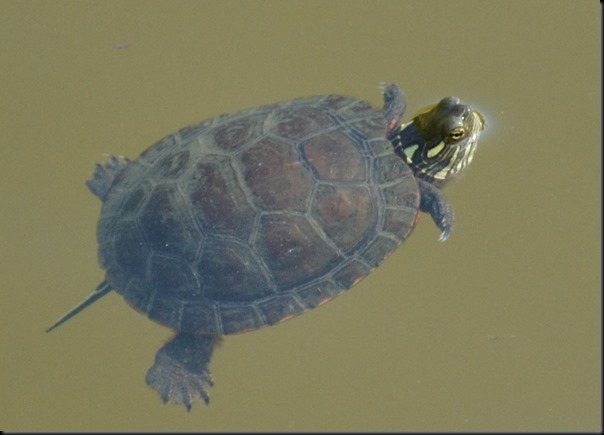 ‘AND NO I DID NOT PEE IN THE WATER’!!
As I am sure many community based people know when one lives in a community with other folks there is always the potential for a differing of opinions when it comes to the neighbor hood and we here at the 5 Seasons are not exempt from that.  Some folks are for having the trees thinned out and some folks are not. 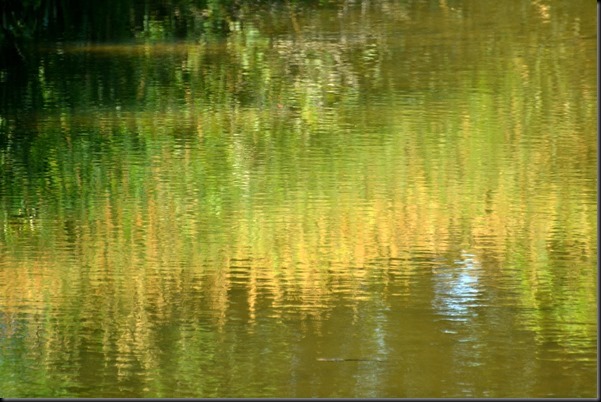 REFLECTIONS IN A CREEK 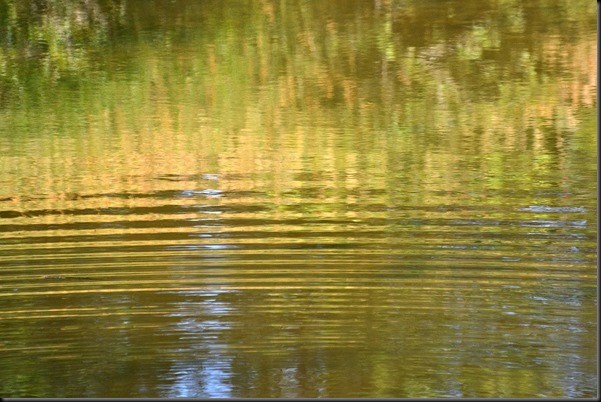 The number one thing which makes our Park so different from all others is the beautiful pine trees.  The trees are what give our Park it’s cozy hominess and I don’t think there is a person in the whole park who would ever want to see all the trees cut down and for sure not us and this is where logic and common sense come into play.  The pine trees were a reforestation project many years ago and were here long before anyone decided to turn the pine forest into a mobile home Park.  At the time only necessary trees were removed to make way for roads and lots.  The forest has grown and aged over the years and logic dictates ‘some’ of the trees be thinned out which is basically what the Park owners are now doing.  I have been amazed over the years that nobody in the park has sustained serious damage to their homes from toppling trees, tree tops and branches.  Personally I think we have all been very lucky so far with the cozy closeness of homes and trees. 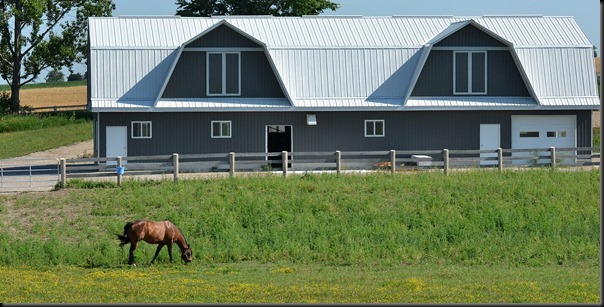 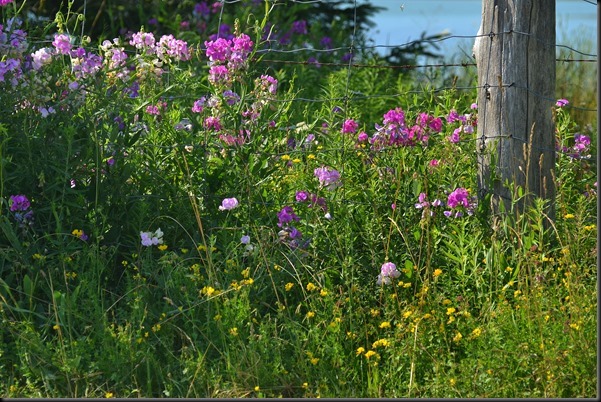 Kinda felt sorry for Jim the tree cutter working away in the heat way up there in his bucket today.  Not an easy job at the best of times let along working in hot conditions.  I was able to help out a little bit again by raking and piling up branches for him to pick up with the Bobcat.  Every time I came back in the house my shirt was sticking to me and I felt like a ball of paste.  Finally had to throw myself into the shower because even the bugs that were landing on me were getting stuck. 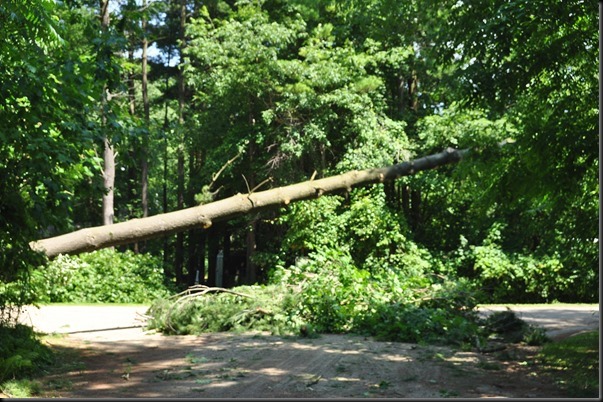 A BIG TREE ON IT’S WAY DOWN THIS AFTERNOON
Took the bike out for a spin this afternoon and as long as I kept moving it felt like Breezer City but every time I had to stop it felt like Cookerville.  Would you believe I’ve only gone through one tank of gas so far this summer but at least I didn’t fill it up with Diesel Fuel this time.  And I never even saw one other biker out today to practice my big Howdy Doody wave on either………….:)) 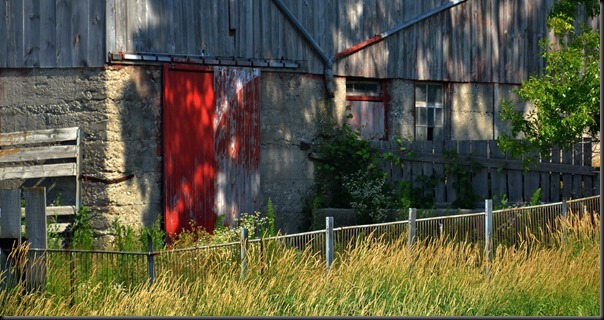 GROANER’S CORNER:((  A man is skydiving, enjoying his free-fall, when he realizes that he has reached the altitude where he must open his parachute. So he pulls on the rip cord, but nothing happens.  “No problem,” he says to himself, “I still have my emergency chute.” So he pulls the rip cord on his emergency parachute, and once again, nothing happens. Now the man begins to panic. “What am I going to do?” he thinks, “I'm a goner!” Just then he sees a man flying up from the earth toward him. He can't figure out where this man is coming from, or what he's doing, but he thinks to himself, “Maybe he can help me. If he can't, then I'm done for.” When the man gets close enough to him, the skydiver cups his hands and shouts down, “Hey, do you know anything about parachutes?” The other man approaching rapidly replies, “No! Do you know anything about lighting gas stoves?”
------------------------------
“When notes get in treble, bass-ically they get put behind bars. The alto-nate punishment is to push them off a clef and hope they land flat on sharp objects.”
Posted by Al Bossence at 7/12/2016