SO NICE TODAY THE GODERICH LOCALS WERE GETTING THEMSELVES ZANY 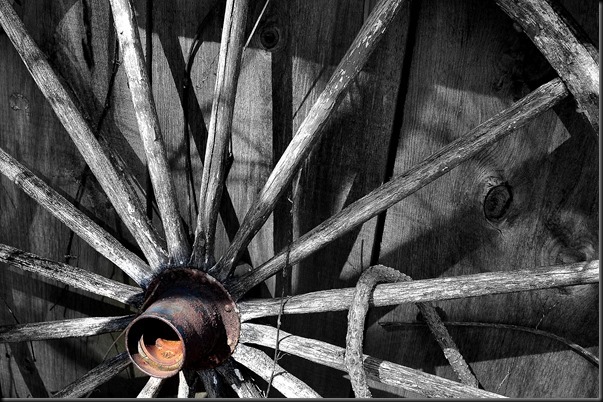 Not often I like to use the word 'perfect' but by golly that's just the kind of Spring Tonic Saturday morning we had going for us today.  I'm a thinkin we must have got ourselves up close to the 70F mark.  Pheebs & I had to go to Goderich & I couldn't help but notice all the people out just enjoying the day & getting zany.  Folks were just walking happy.  Saw 2 old fellers near a Nursing Home on skateboards, an elderly lady uptown pulled herself out of her wheelchair & did a couple back flips down the sidewalk.  Saw another old timer doing bicycle wheelies in the Walmart parking lot.  Yep, folks was happy today alright.  And here’s the best part……Sunday is going to be even nicer so people are gonna be a gettin even zannier.  Now how is it possible to improve on ‘perfect’ with all that going on.  Oh Dear there I go using that word again………..

I TOLD YOU GODERICH PEOPLE WERE GETTING ZANY TODAY 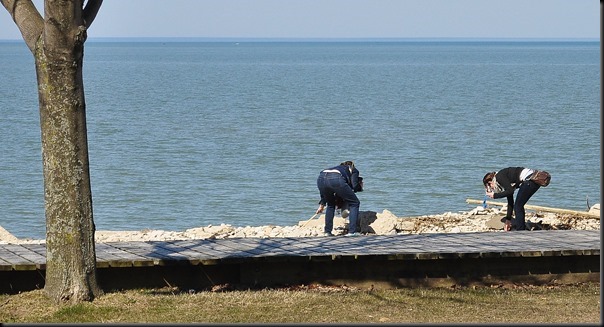 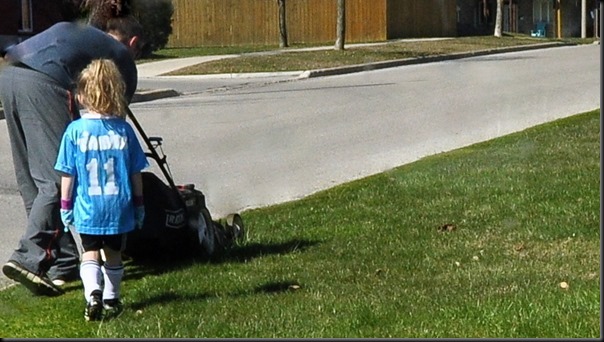 LOOKS LIKE THIS LITTLE GAL IS GETTING A LESSON ON LAWN MOWING   (ALL 3 PHOTOS ARE DRIVE-BYS)
After leaving the motorcycle battery on the trickle charger for a few more hours Friday night I tried it again in the bike this morning.  Nothing, stone dead & not even enough juice to spark up the ignition lights.  Grabbed my 'Eliminator' battery booster & hooked the cables onto the bikes dead batter & hit the starter.  Three cranks & 30 seconds later the bike was up & running for another season.  Soon as I disconnected the booster cables the bike stopped running so knew I needed a new battery. 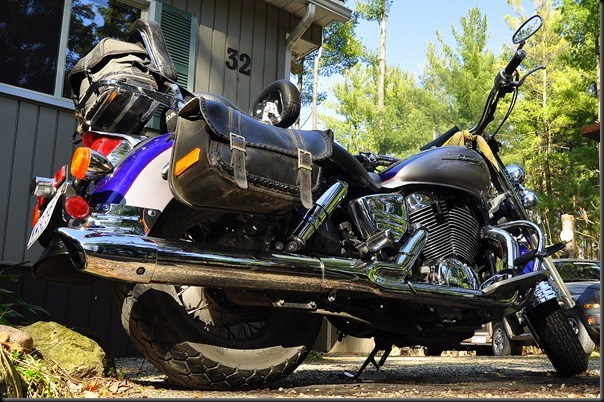 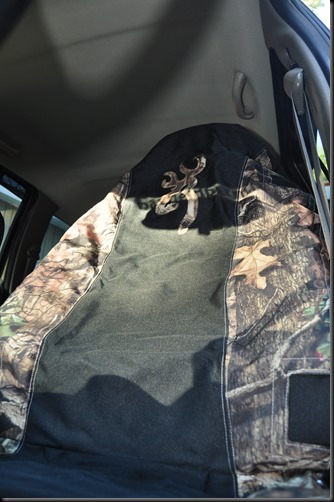 NEW DRIVER’S SIDE SEAT COVER IS STILL KINDA WRINKLY FROM THE PACKAGING >>>>>>>> Friday I had picked up a seat cover on sale at the Canadian Tire store in Goderich for the driver's seat in the Jeep but it was a piece of crap so now needing a new battery for the bike Pheebs & I were on the road back to Canadian Tire about 10 this morning.  The store was busy & there was about 6 of us in line at the automotive counter.  Five of us were there for new batteries.  Two for bikes, 2 for garden tractors & 1 for a wristwatch.  I think the last guy was in the wrong store. 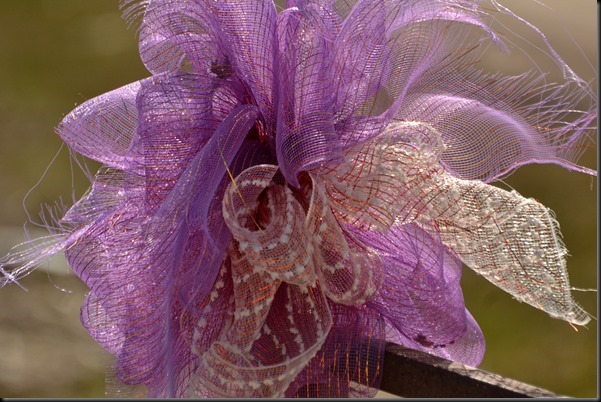 SAW THIS HANGING ON A FARM GATE & LIKED THE COLOR SO MUCH i BACKED UP & GRABBED A PICTURE OF IT From the Canadian Store Pheebs & I took a swing down around the harbor & I was aware of a familiar smell one only gets from being near a large body of water.  I call it a harbor smell & I've always liked it.  It's one of those smells that evokes memories of days at the beach.  Kind of a mixture of fresh lake air with a bit of suntan lotion, fish, fishing boats, lake freighters, sand & waves all thrown in together.  Even with ones eyes closed one would know they are near water. 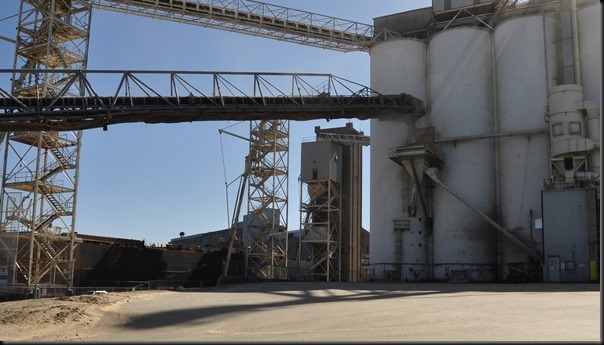 A short walk for Pheebs & I in the dog walking area & noticed a couple small John Deere tractors cleaning the beach with some kind of special equipment attached to them.  Lake water was clear & I could see stones under water along the water's edge.  Small waves lapping along Lake Huron's shoreline.  With windows down & no heater needed Pheebs & I headed back to Bayfield.  The word 'perfect' kept popping into my head. 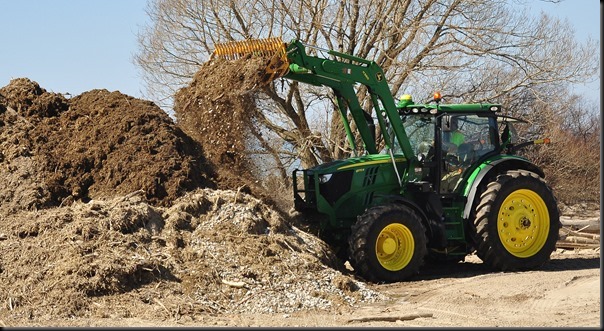 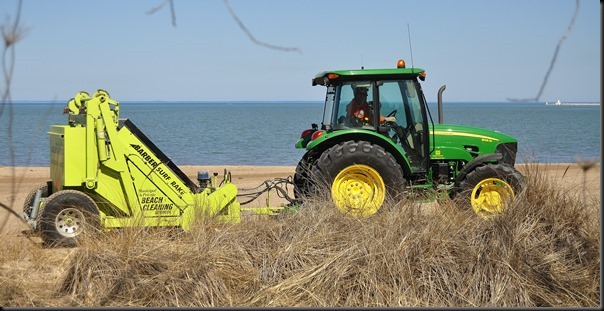 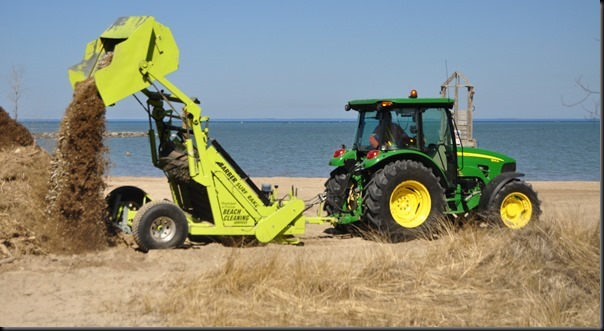 No problem getting the new seat cover on Libby's driver's seat & I figure in a couple months we'll have us enough money saved up to get a second seat cover for the passenger's side.  Those darn things sure aren't cheap, well at least not the better made ones that is.  Hooked up the new battery, hit the starter, & the bike was running & raring to go.  Grabbed my leather jacket, helmet, goggles, gloves, snorkel & a pair of flippers & roared out the driveway.  Oh my, here comes that word 'perfect' again as I rode out of our pine forest into brilliant sunshine & warm air.  By the time I hit third gear the grin on my face had spread from ear to ear giving me that big goofy looking Cheshire Cat look.  Last time I had a grin that big was the last time I took the bike out a year ago for it's first run of the season:)) 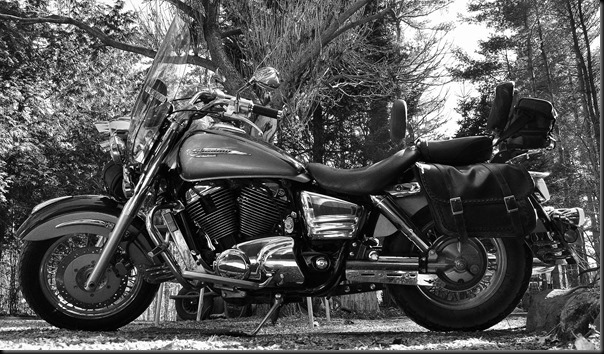 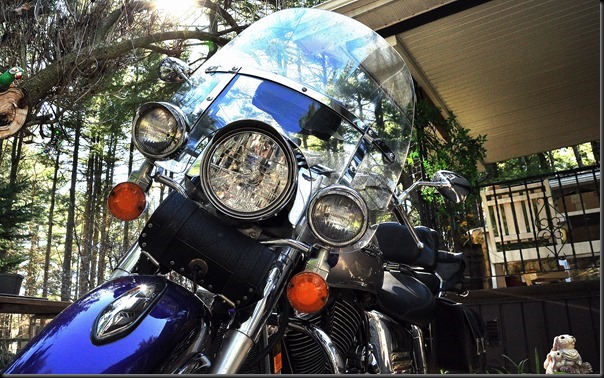 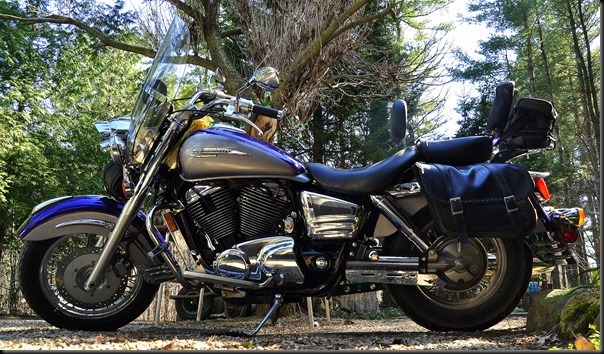 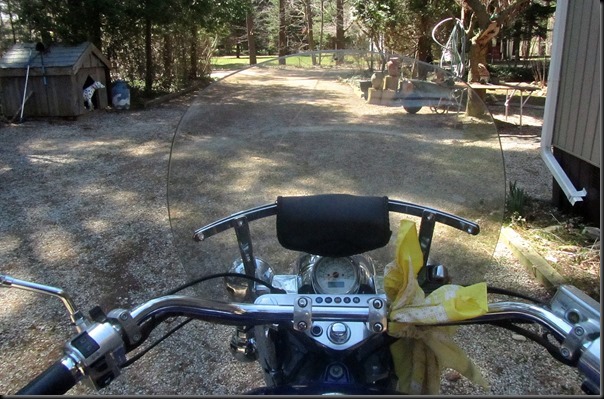 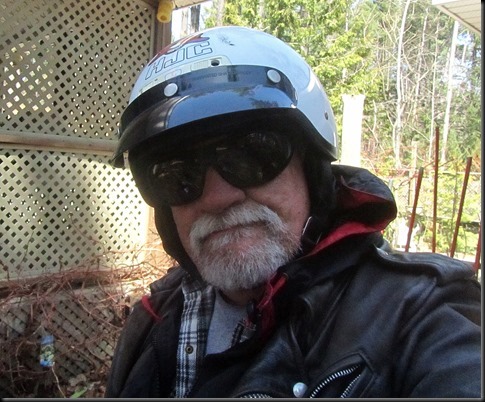 HELMET IS FROM A NORTH RANCH CONGRESS ARIZONA YARD SALE A COUPLE WINTER’S AGO….$20 & IT EVEN FITS MY BIG OVERSIZE HEAD TOO:)) After a short but mighty fine ride through Huron counties countryside I was back home with bike parked & my cleaning supplies out.  Shined up all the chrome & waxed up a few metal parts.  And then I noticed the license plate sticker.  It was expired as of last October.  It was only then I remembered I had not re-newed the plate last Fall because I was thinking of selling the bike.  First thing Monday I will be at the license bureau picking up a new tag. 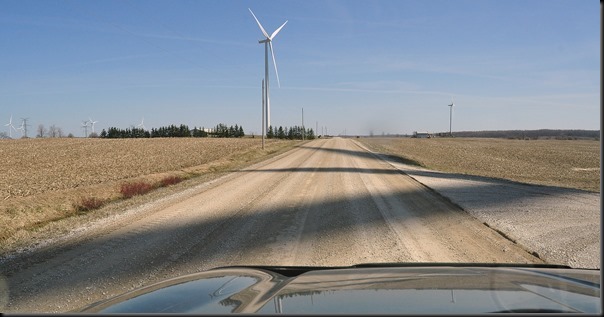 THOSE 3 LONG SHADOWS ACROSS THE ROAD ARE FROM FAST MOVING WIND TURBINE BLADES….TOOK ME 5 SHOTS TO GET ALL THREE BLADE SHADOWS FROM 2 DIFFERENT TURBINES ON THE ROAD AT THE SAME TIME
For some unknown reason this mornings activities tuckered me out & I ended up in my recliner for a snooze this afternoon.  But no matter, how nice to have our doors & windows all open again with fresh air blowing though the house & sunshine beaming in through the windows.  Nothing like a prolonged spell of crappy weather to make one really appreciate to the fullest these fine & yes 'perfect' days when they do occasionally come along. 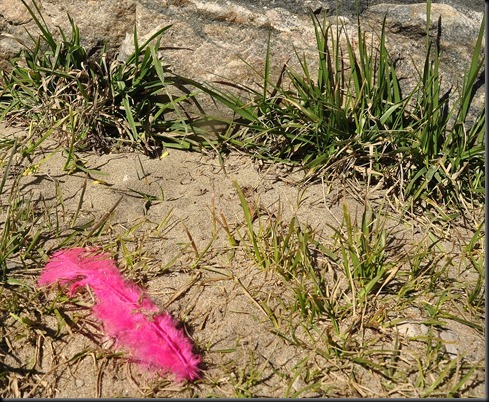 NOW I KNOW OUR COLORFUL SPRING SONG BIRDS ARE DUE SOON BUT I’M THINKING GODERICH MAY HAVE HAD AN EARLY PINK FLAMINGO LAND ON THE BEACH:))
Thought Technomadia had a good post about a side of RVing not everyone likes to talk about.  The Sucky Sides Of RVing: 10 Things That We Hate About Full-Time RVing I always look for & appreciate honesty in anything I read & especially when fellow RV Bloggers are willing to step up & write about & share the downsides of this RV lifestyle as well as the upsides.  It's not all positive & it's not all negative.  It's just reality whether we like to write about it or not.

OK SMARTY PANTS SO WHAT ARE YA GONNA DO WITH IT NOW?? GROANER'S CORNER:((  - I think it’s pretty cool how the Chinese made a language entirely out of tattoos. - The attorney tells the accused, “I have some good news and some bad news.”  “What’s the bad news?” asks the accused.  “The bad news is, your blood is all over the crime scene, and the DNA tests prove you did it.”  “What’s the good news?”  “Your cholesterol is 130.” - A woman noticed her husband standing on the bathroom scale, sucking in his stomach. “Ha­­! That’s not going to help,” she said.“Sure, it does,” he said. “It’s the only way I can see the numbers.”
-  Bifocals are God’s way of saying, “Keep your chin up.”
- So what if I can’t spell Armageddon? It’s not the end of the world.