I’M WONDERING IF THIS MIGHT BE A BONAPARTE’S GULL

I knew soon as I opened my eyes this morning something wasn’t right.  When I had fallen asleep the night before everything was normal but now even when I put my glasses on things were still not right.  Blurry, out of focus, tipsy.  First thought was oh-no something has happened to me in the night.  Maybe a mild stroke.  Everything else seemed normal except for my vision.  Sat in my recliner for a few minutes trying to logic things out.  TV screen was blurry & so was the clock but not as blurry with my glasses on.  It was about the third time I took my glasses off my right hand touched & felt something abnormal about the right lens.  Looked down & noticed the left lens was it’s usual scratch coated self but I could see clear through the right lens.  Wait a minute!!  I poked my finger at the right side lens & my finger went right through without touching anything.  The whole lens was missing & there just to the right I could see where the frame had separated from the arm.  Good news, no stroke.  Bad news, my glasses were broke…………..or were they. 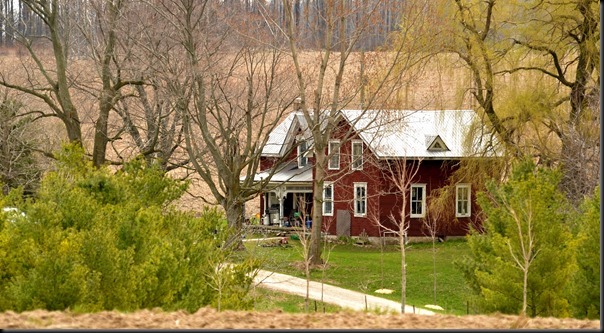 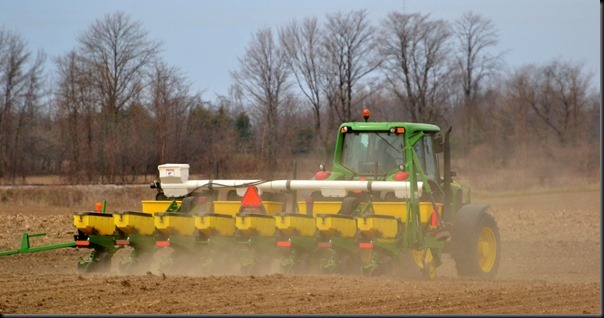 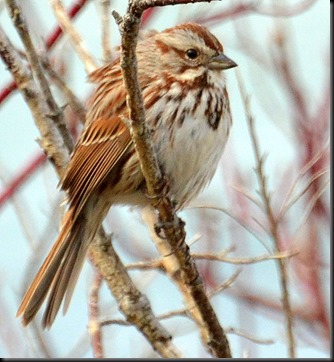 It was about this time came Kelly came upon the scene & being kind of an old glasses mechanic quickly informed me they were not broke & in fact the tiny screw holding the glass frame to the arm had simply come out.  Luckily the screw had remained with the frame & not fallen anywhere.  And speaking of falling out, where was the lens??  I suspected the floor somewhere so cautiously extracted myself up & out of my recliner.  As luck would have it I spotted the lens right away…….I had been sitting on it.  Ok, enter Little Miss Fix-It:)) 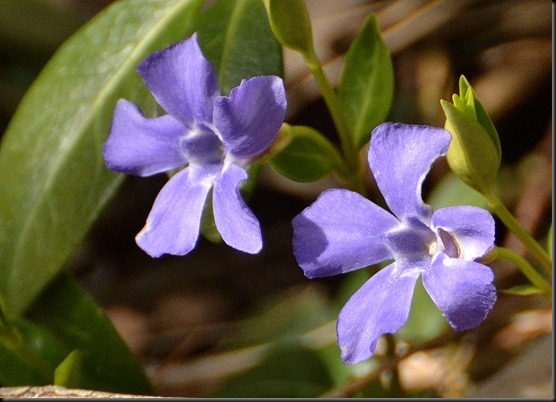 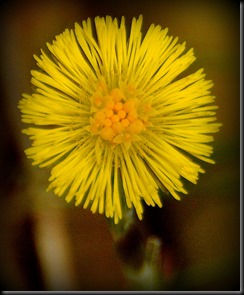 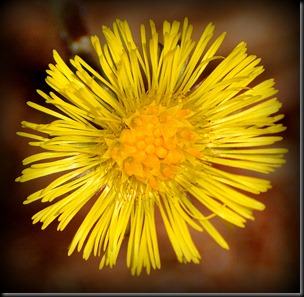 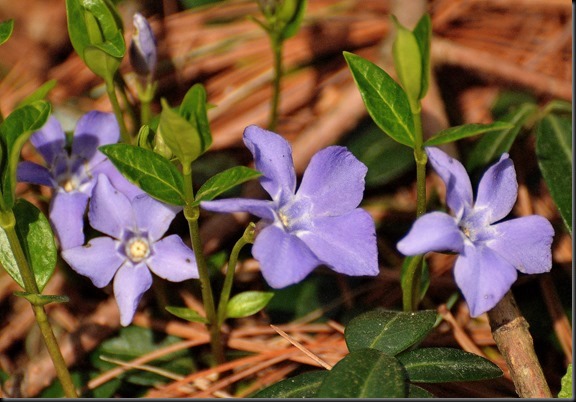 TINY VIOLETS ON THE FOREST FLOOR 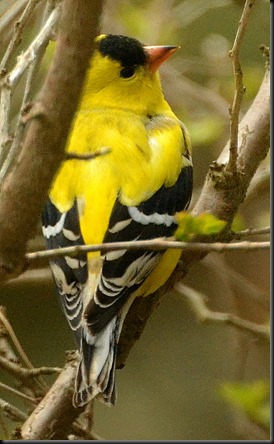 Took Kelly about 20 minutes to get that lens back in the frame & the screw tightened up.  Would have taken me about 20 seconds to lose patience & heave the glasses across the room.  We are so fortunate here at the Bayfield Bunch to have such a patiently inclined person with mechanical aptitude to boot.  I can’t even say I’m good at taking out the garbage anymore because earlier in the week I forgot to do that too.  Think maybe I had better get my name in at ‘The Home’. 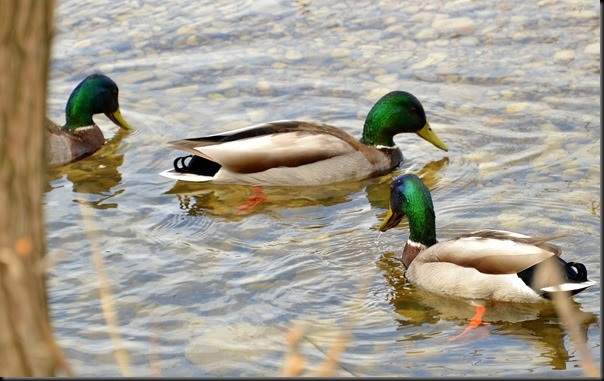 I BELIEVE THESE QUACKERS TO BE MALLARD DUCKS 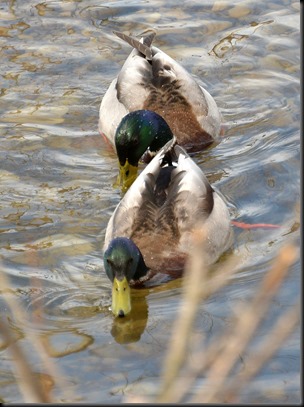 Realizing I was getting low on peanut butter I readily accepted yet another excuse for Pheebs & I to head off into the countryside.  Luckily there’s lots of rural Ontario between our place & Walmart in Goderich so we were soon dusting ourselves down the road.  A swing around the Goderich harbor is always in order so from Walmart that is where we headed.  Nobody at the doggy park so we soon had shoes & paws on the ground for a walk.  About the only photos I managed to find were a few of our feathered friends as well as a couple new Inukshuk guys. 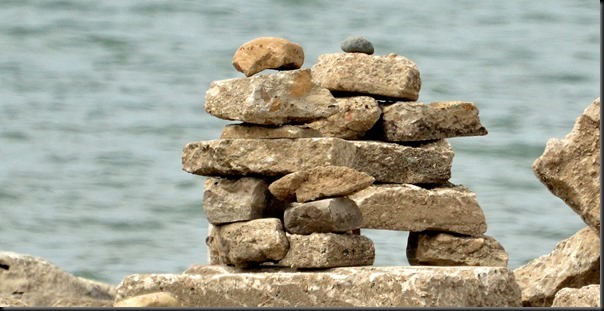 LOOKS LIKE THE INUKSHUK GANG IS TRYING A COMEBACK 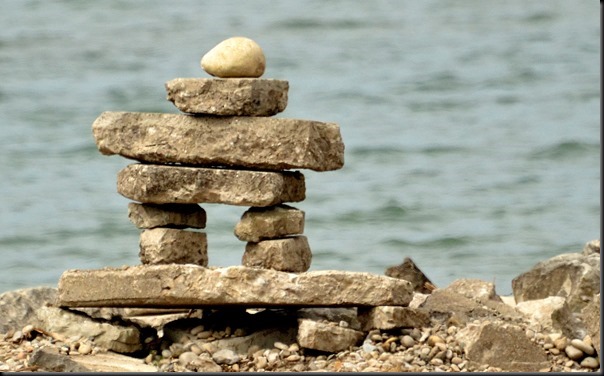 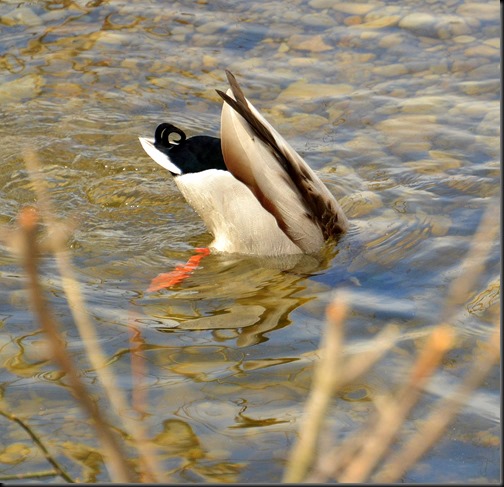 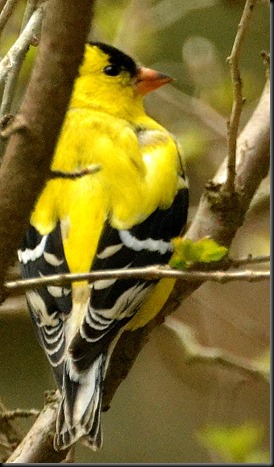 On our way home I managed to confuse myself at McDonalds when I asked for a single Burrito at the drive-thru.  The speaker box informed me their breakfast menu was over half an hour ago.  I nervously & too hastily stumbled over my options on the big food display board & then asked for a ‘Teen Burger’.  The speaker box again squawked at me saying, “you are not at A & W Sir”.  Guess I shouldn’t have been shuffling through a handful of A&W coupons earlier in the morning.  I had A&W on the brain.  In fact if it wouldn’t have been for the color of the building that’s where I might have thought I was.  Somehow I bumbled out of my fumble & heard myself say, “I’ll have a Quarter Pounder’ please.  I didn’t really want a Quarter Pounder but there I was pulling up to the wicket to get one anyway & with that Pheebs & were on our way on down the road munching happily away on our Burrito, wait a minute make that a Teen Burger…….alright alright already, a Quarter Pounder!!  Geeezzzzzzzzzz.

WINTER COATS AT THE BEACH TODAY

Rest of the afternoon we did about the whole square root of nothing.  Hung up a couple more bird feeders, checked the 4 deep cell batteries in the Motorhome, fired up the Motorcycle to keep a charge on the battery & that was about it.  We have an early start in the morning & have to be at London’s University Hospital by 8:30.  Kelly has a check up appointment with her Specialist.  Luckily Henry's Camera Store is near by because I want to stop in with my new lens to ask them about a click I keep hearing inside.  Doesn’t sound normal to me & my old identical lens never had that click.  Only clicks when the VR (vibration reduction) button is on so I figure it’s got something to do with that.  We’ll see………… 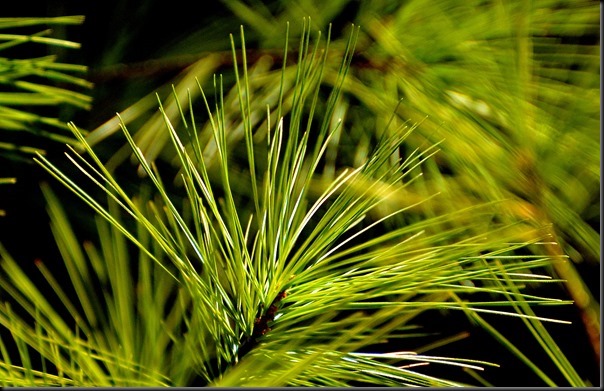 GROANER’S CORNER:((  Today we mourn the passing of a beloved old friend, Common Sense, who has been with us for many years. No one knows for sure how old he was, since
his birth records were long ago lost in bureaucratic red tape. He will be remembered as having cultivated such valuable lessons as:

Common Sense lived by simple, sound financial policies (don't spend more than you can earn) and reliable strategies (adults, not children, are in charge). His health began to deteriorate rapidly when well-intentioned but overbearing regulations were set in place. Reports of a 6-year-old boy charged with sexual harassment for kissing a classmate; teens suspended from school for using mouthwash after lunch; and a teacher fired for reprimanding an unruly student, only worsened his condition.

Common Sense lost ground when parents attacked teachers for doing the job that they themselves had failed to do in disciplining their unruly children.

It declined even further when schools were required to get parental consent to administer sun lotion or an Aspirin to a student; but could not inform parents when a student became pregnant and wanted to have an abortion.

Common Sense lost the will to live as the churches became businesses; and criminals received better treatment than their victims.

Common Sense took a beating when you couldn't defend yourself from a burglar in your own home and the burglar could sue you for assault.

Common Sense finally gave up the will to live, after a woman failed to realize that a steaming cup of coffee was hot. She spilled a little in her lap, and was promptly awarded a huge settlement.

Common Sense was preceded in death, by his parents, Truth and Trust, by his wife, Discretion, by his daughter, Responsibility, and by his son, Reason.

He is survived by his 4 stepbrothers: