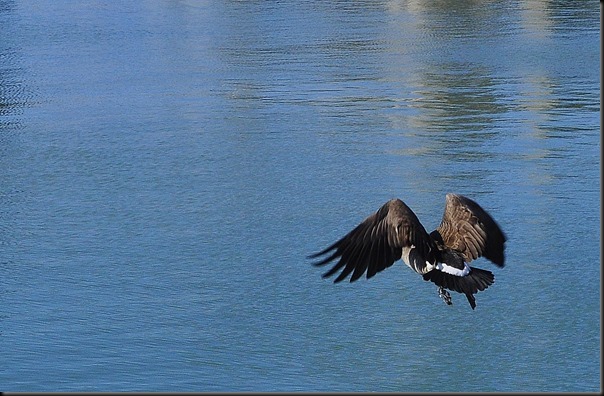 Kelly is much more a Facebook person than I am & on Wednesday she read something on Facebook that neither one of us knew about.  Did you know that in your 'Messages' folder there is another part to it called 'Filtered Messages'.  Filtered messages are messages someone can send you that is not on your 'friends' list & here is the problem with that as we understand it.  When a message comes in from someone on your friends list a red dot appears to let you know you have a new message.  If a message comes in from someone not on your friends list a red dot does not appear so you have no idea someone has sent you a message.  Both Kelly & I have just found messages in our ‘Messages’ section that have been sent to us over the past number of years & we had no idea they were even there.  Can you imagine how bad we feel about that right now.  Readers messaging us with questions, long ago friends dropping by to say hello, some requests, some advice, suggestions, well wishes, etc.  A message from a friend saying their dog had died, we never knew.  A lady requesting my permission for her to use some of my photos for abstract painting, I never knew.  Samuels Hotel/Restaurant in Saltford just north of Goderich nearly 2 years ago requesting permission to use my Hullett-Marsh Blue Heron atop a stump photo for a fund raising project.  Never knew about that & would have been happy to have them use that photo.  A fellow RV'er wondering about boondocking sites around Congress just a month ago or so.  Did not see that message and it just goes on & on.  Both Kelly & I feel this is very poor on Facebook's part not to have some kind of notification for users regarding messages coming in from people who may not be on their 'friends list'.  To check your 'filtered messages' go to your 'Messages' button top right & click that.  Next look for the faint words 'Message Requests' & click that.  Now click on 'See filtered requests.'  Like us you may be surprised at how many messages are there that you never knew about.  My apologies to all you folks who sent us messages over the past years that we never even knew about....................:(( 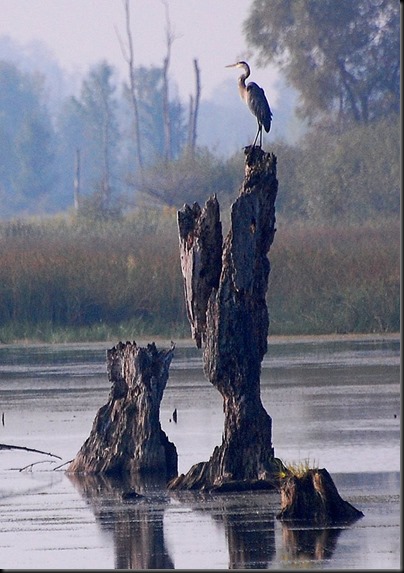 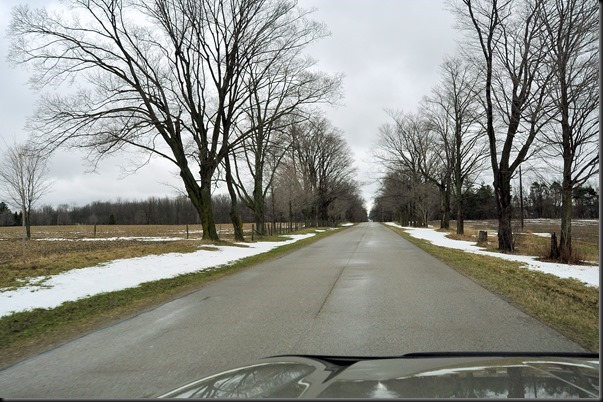 A COLD & DAMP OVERCAST THURSDAY MORNING ON OUR WAY TO GODERICH

Now here’s a little something I haven’t quite been able to figure out.  On the birdseed bag the weight always remains the same yet every year those big bags of birdseed get heavier & heavier.  Too embarrassed to ask the one armed elderly lady cashier in a wheel chair with a patch over one eye to carry it out for me I struggled & weaved across the parking lot like a drunken sailor under the weight of several kegs of demon rum.  Ok, Ok, so the lady wasn’t elderly or in a wheelchair & actually did have possession of both her arms & eyes but I was still too embarrassed to ask the young girl to carry the big bag of birdseed out for me……………. 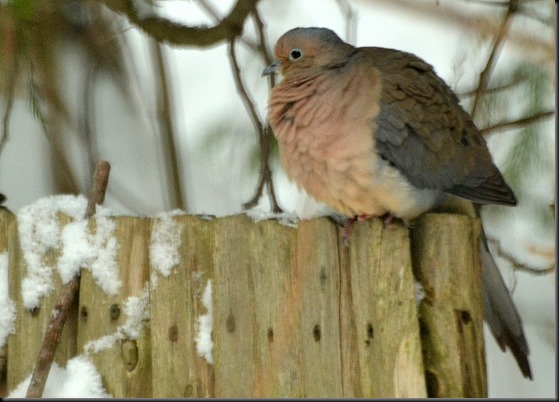 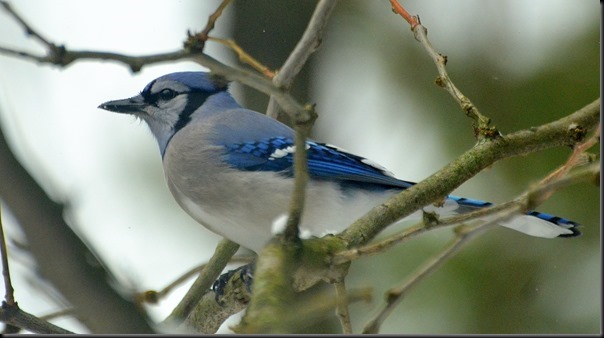 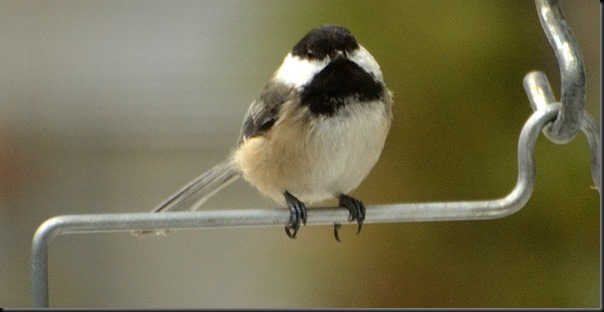 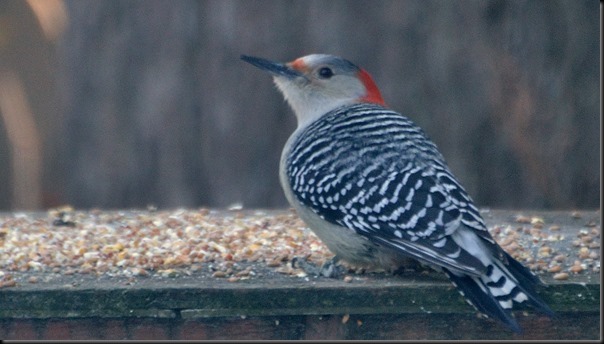 OK GUYS LET’S ALL GET ALONG NOW 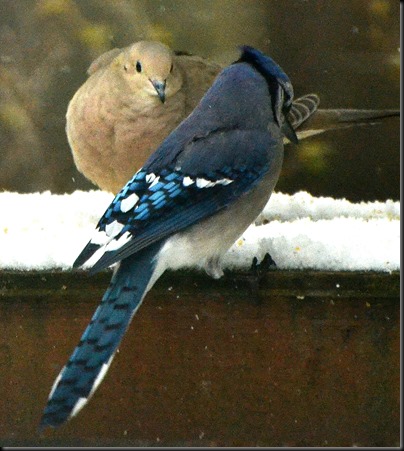 A swing through McDonalds up the street netted us a coffee & muffin before taking ourselves for a drive down around Goderich’s south harbor.  The Amstelborg was gone & in it’s place tied up alongside the grain elevators was the Capt. Henry Jackman.  Just a few hundred yards astern & faced in the opposite direction floated the Radcliffe R Latimer taking on a big load of salt at the Sifto Salt Mine.  Two large freighters were still tied up on the north side of the harbor & I think that is the most freighters I’ve ever seen in the harbor at one time. 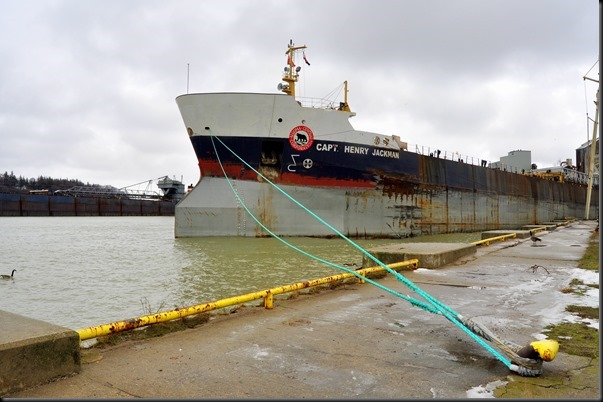 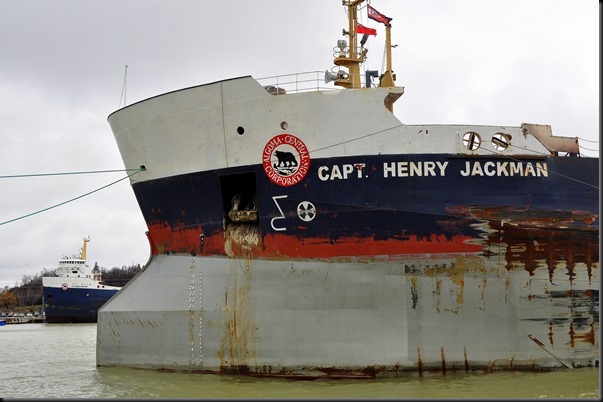 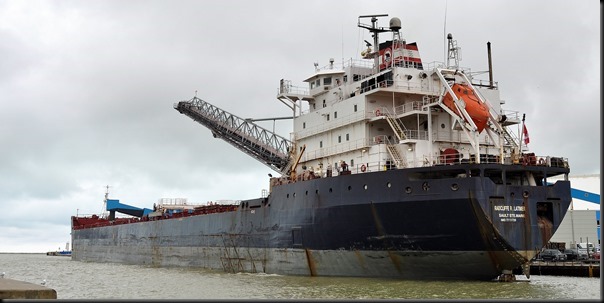 At the dog walking area along the beach I stood on Lake Huron’s shoreline thinking to myself of the huge contrast to what we normally see in the South-west each winter.  No big lakes looking like oceans in the mountains & deserts of Arizona or New Mexico except of course if one made it over to western California & the Pacific Ocean it’s very self. (which we haven’t yet)  Again with cold winds whipping in across the water Pheebs & I were soon back into the warm Jeep headed for home.  Also noticed driving by where the Inukshuks once stood even the tilted wooden cross I took a picture of a few days ago was gone.  Maybe I just missed it…………… 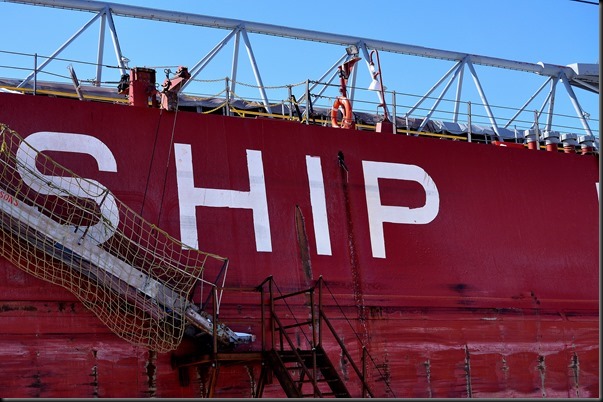 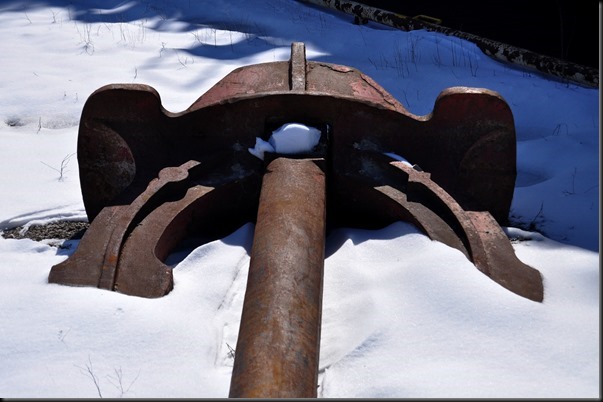 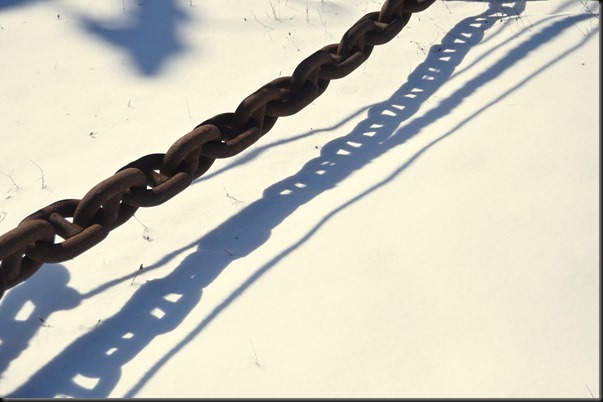 ANCHOR CHAIN SHADOW IN THE SNOW 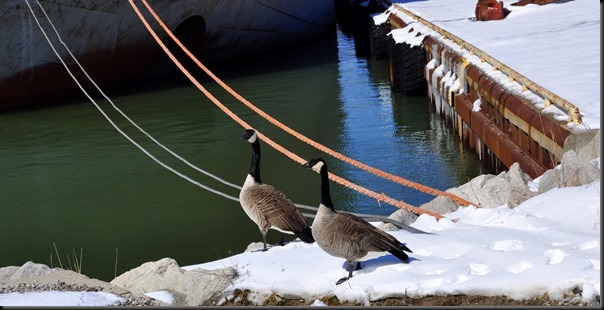 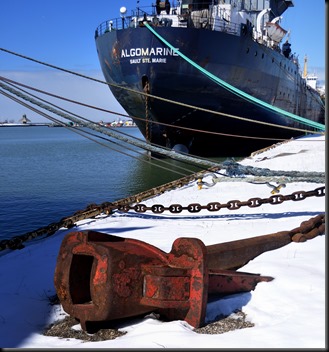 Now it’s very unusual for Kelly & I to visit with people but we did walk over to our good friends Gayle & Richards place this afternoon.  It has been years since the 4 of us have sat down for coffee despite them being 2 of our best friends.  I have known Gayle & Richard for over 40 years.  They, like us, are very private people & not into visiting either so like them we are very respectful of each others privacy.  You may remember it is Richard & I who occasionally get together for our country road coffee tours through the summer months & as soon as area roads dry up we’ll be out dusting up our tires again. 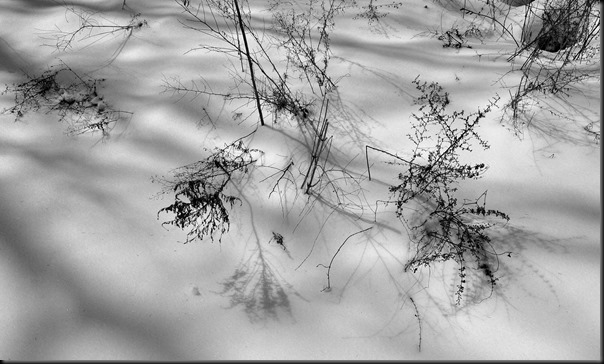 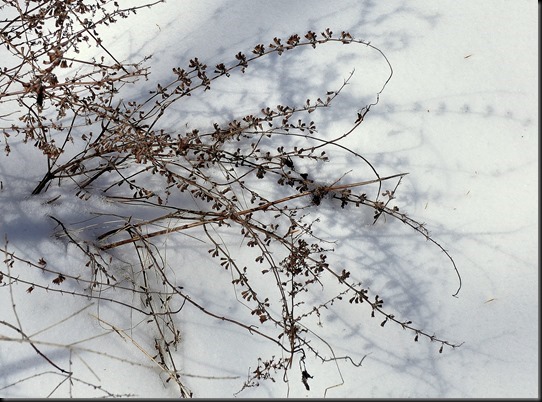 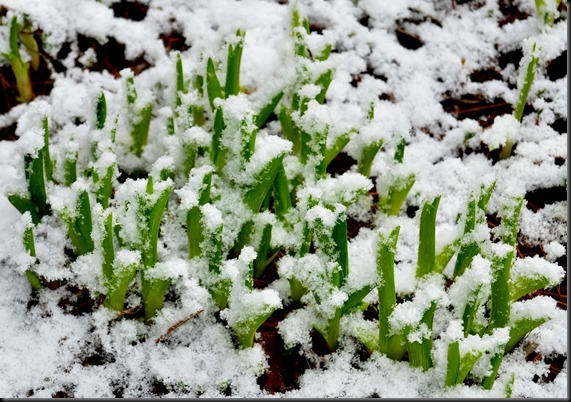 SIGNS OF SPRING ARE SLOW COMING THIS YEAR 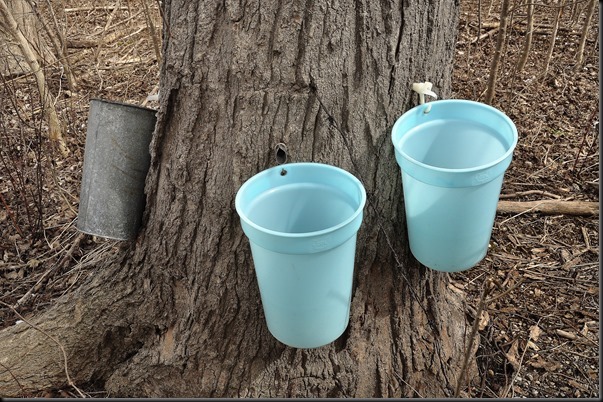 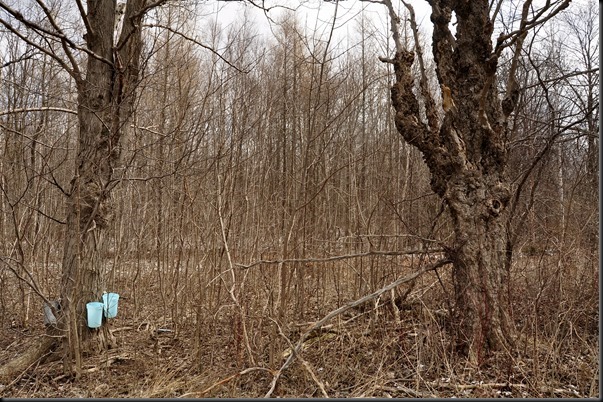 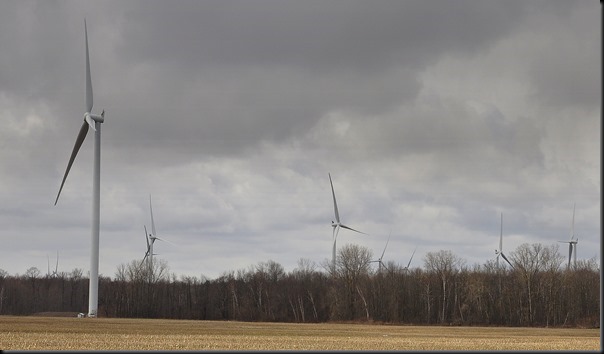 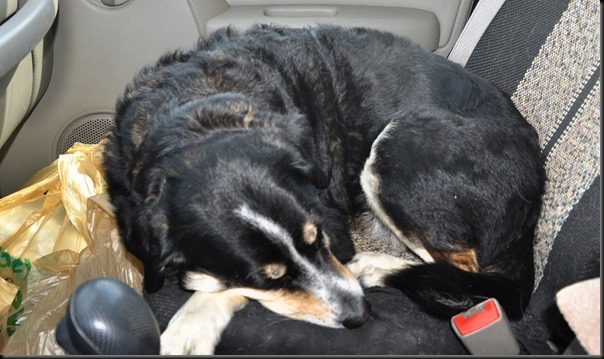 No rain today but with all the moisture in the ground & temps around the freezing mark we had us real cold & damp overcast day.  A lot of snow has been knocked down by Wednesdays rain but I think we have another icy weather front moving our way bringing more wintery weather & as I write this tonight it is snowing again.

GROANER’S  CORNER:(( Smith goes to see his supervisor in the front office.  "Boss," he says, "we're doing some heavy house-cleaning at home tomorrow, and my wife needs me to help with the attic and the garage, moving and hauling stuff."  "We're short-handed, Smith,"   the boss replies. "I can't give you the day off."  "Thanks,   boss,"   says Smith,   "I knew I could count on you!"