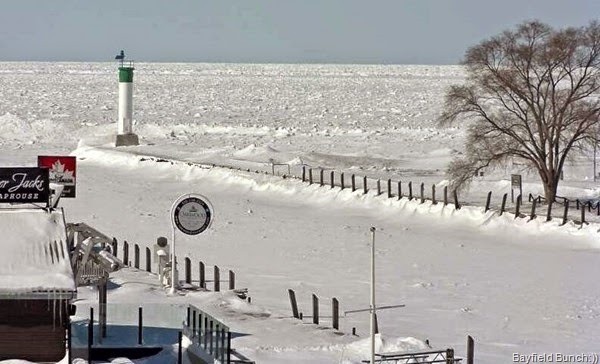 ABOVE IS HOW GRAND BEND ONTARIO LOOKED ONE YEAR AGO TODAY & BELOW IS HOW IT LOOKED TODAY….A LOT LESS ICE & SNOW FOR SURE 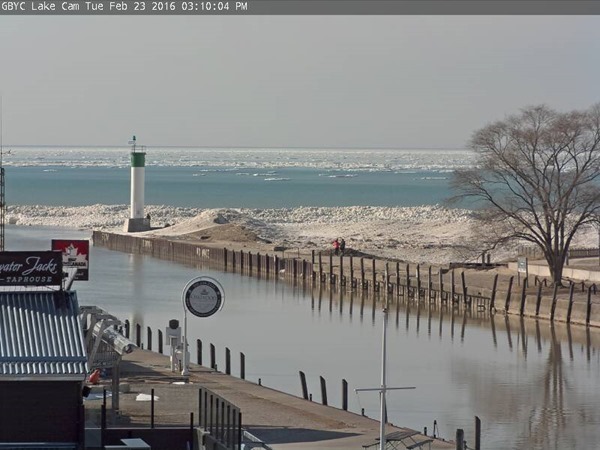 On Monday’s drive I took a photo of an older abandoned Class C RV sitting near a desert wash.  I took the picture because it reminded me of a Class C I used to see years ago long before we began our RV travels.  I was driving a comfy passenger van for Airports Anywhere/Stratford Airporter in those days picking up & delivering passengers from the Goderich, Clinton, Bayfield, Seaforth, Mitchell, & Stratford areas to Toronto Ontario’s Lester B. Pearson International Airport.  Majority of my runs took place between Stratford & Toronto.  About once a week I would have people to pick up in the Clinton & Goderich areas & there was always a vehicle sitting in a driveway along highway 8 in Clinton’s east end I always looked for each time I passed that away.  Approaching Clinton heading west towards Goderich I always began watching for a little Class C Shamrock RV on the left side.  It was white with Irish green stripes & decals on it & I think it might have been at the 3rd or 4th house I went by.  Oh how I would wish I was the owner of that Shamrock.  I liked the looks of it, liked the green colors, & I think it may even have had a green Shamrock on the front overhang.  I’m guessing it might have been about 21 feet long & each & every time I saw this RV my mind would right away swing into the future thinking how nice it would be to own that little Class C & travel the highways & bi-ways of North America.  This was in the late eighties if I remember correctly & little could I have ever imagined at that time that years later all those dreams I had imagined way back then would one day come true.   From those early days till now we’ve actually had 3 Class C’s, two Class A’s, & a truck & 5th wheel all stemming from those dreamy days I had from seeing that little Class C Shamrock for a number of years parked in a Clinton Ontario driveway………….:))