THINKING BACK ON NEARLY A DECADE OF WONDERFUL SNOW BIRD YEARS 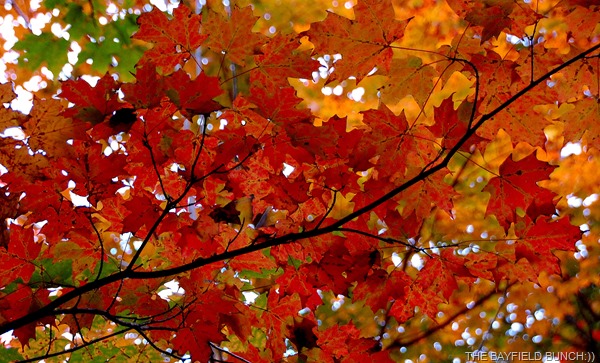 Our weather today has been very strange with sun one minute & sleeting rain the next.  Kelly was in Goderich & just missed what a downtown store employee called a ‘possible’ mini-tornado but did get a cell phone shot of the Canadian Legion building with a bunch of bricks torn off the side wall.  Aside from branches down I haven’t heard of any other damage.  Likely just strong gusting winds coming in off the lake.

A SECTION OF BRICKS HAVE FALLEN FROM THE ROYAL CANADIAN LEGION BUILDING….KELLY’S PHOTO 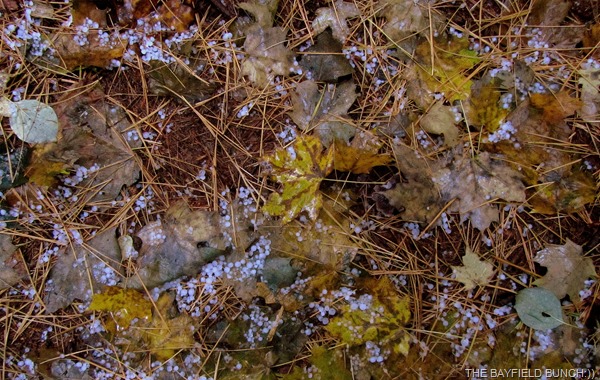 Question was asked, Do we regret anything about choosing an RV Snow Bird lifestyle over the past 9 years & the short answer to that is 'NO'.  Yes we would have more money in our pockets right now had we decided to be 'stay at home' people during the winter months but we decided a long time ago that kind of lifestyle was not for us & we set our sights on RV travels early on.  In fact it was soon after we met back in the summer of 1993 that we both discovered an adventurous traveling spirit in each other.  We knew we had different ideas than most folks & together we could maybe one day pull some of those ideas together.  And we did.  In 1998 we bought a 79 17' Class C Dodge Centurion & that little blister got us started with week-end trips to Ontario's Pinery Provincial Park & up along the Georgian Bay shores.  In 2001 it was a 1991 24' Prowler Travel Trailer with which we spent a number of week-ends at the Pinery & a week at Killbear Provincial Park in the Muskokas.  Wasn't until 2006 our dream finally came alive & we began our Snow Bird Travels in earnest to the South-west first heading out with a 2004 GMC Sierra hauling a 2005 28' Rockwood 5th Wheel then 6 months later switching to a 2003 33' Class A Damon Challenger Motorhome.  And like they say the rest is history & for long time readers you know the rest of the story from there...............:)) 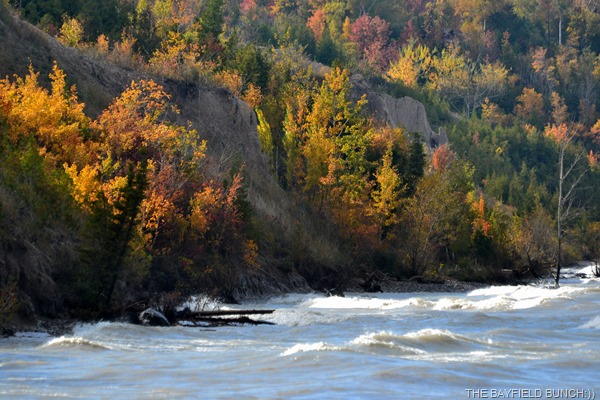 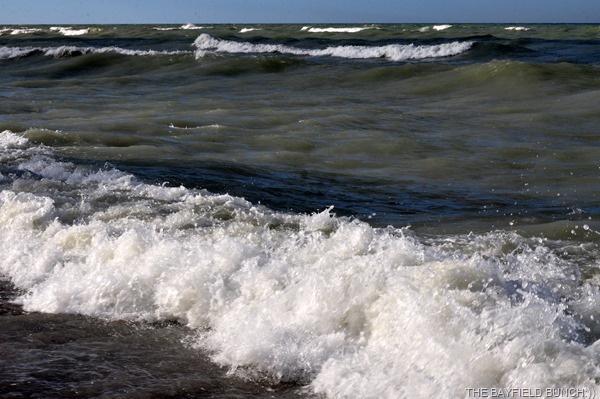 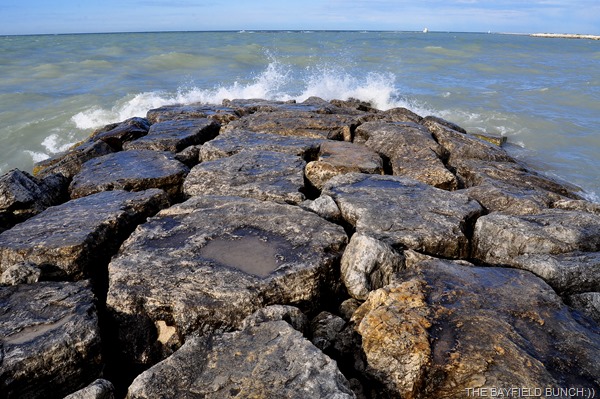 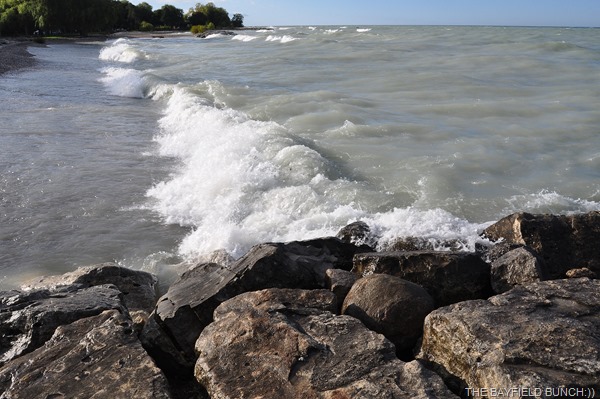 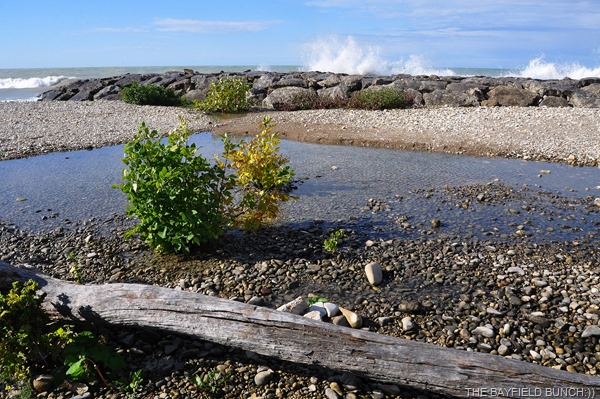 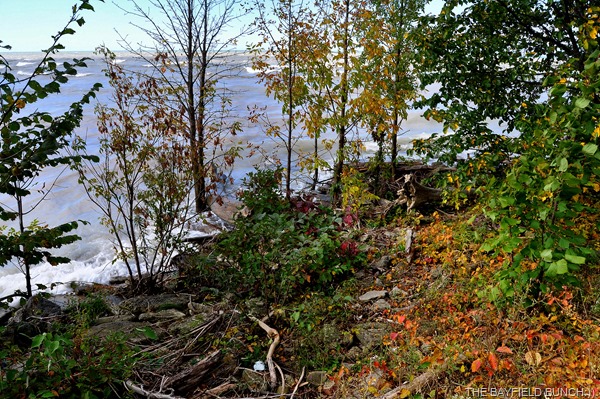 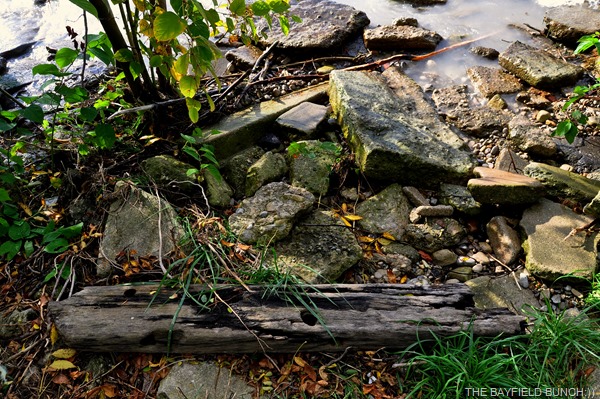 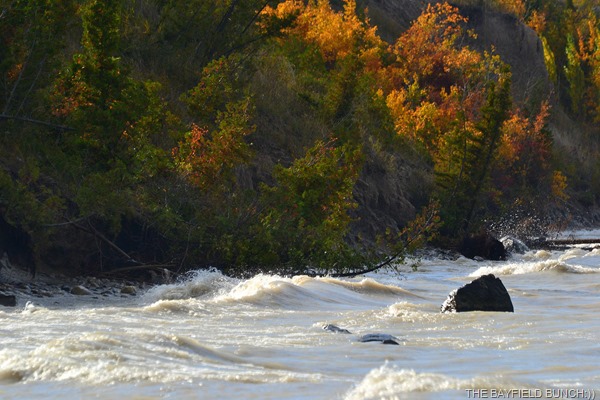 Nothing can replace the memories we have made & the places we have been & things we have seen these past bunch of years.  Have met a few great people along the way as well but most of all I think it is the sheer fact we made & still do make the effort each winter season to get out there in this big beautiful land of ours & be a part of something special & something different.  End of days will come soon enough but we try to keep one step ahead of that as best we can by not falling into a sedentary lifestyle.  Yes there are hazards & perils & discouraging days traveling but the rewards are much greater in the end.  We've stood on the rim of the Grand Canyon, walked the pathways through Bryce Canyon & hiked trails in Zion.  We have walked in the footsteps of Cochise & Geronimo in the Chiricahua Mountains & strolled the streets of Tombstone Arizona.  Hiked into Fort Bowie, stuck our feet under the fence between Mexico & the U.S. more than once.  Been to the Pink Store in Las Palamas Mexico & got into a bit of trouble in Sonora Mexico one time.  Been to Kitt Peak in Arizona to look at all the telescopes, walked around the Davis-Monthan airbase in Tucson on New Years day onetime.  Have attended the largest RV rally in the world pretty well every year we've been in the Quartzsite area.  We didn't catch the 3:10 to Yuma but have been in Yuma a bunch of times.  Been to the shores of California's Salton Sea & boondocked in both the Mojave & Sonoran deserts.  Been through Nevada's Death Valley several times & camped out in Lone Pine California’s Alabama Hills.  Did Ranch Sitting for a few years just a 20 minute drive from the Mexican border near Douglas Arizona.  Scuffed our Jeep’s tires on the rocks of Moab Utah, threw snowballs in New Mexico’s Emery Pass & many times kept look-out in Roswell for Aliens while passing through.  We’ve done the long miles across Texas, driven through a Louisiana Swamp or two, traveled our tires on the Natchez Trace & waved numerous times to Elvis as we by-passed the west side of Memphis Tennessee.  Both Indianapolis & Chicago have chewed us up & spit out out more than once & we have stood in the shadow of Mount Rushmore.  Traveled the North Route overtop Lake Superior & had a close up look at the Wawa Goose.  Even walked the grounds of Canada’s favorite sitcom, Corner Gas.  Managed to get ourselves lost in the Ozarks one time & have travelled sections of the famed Route 66.  Made our way through the forests of Arkansas & the flats of Oklahoma.  Wandered the casinos of Las Vegas.  Kansas winds once pulled our side awning out & Colorado’s Rocky Mountains gave us some grief more than once.  Rolled our tires through both North & South Dakota with even a few miles put on in both Wyoming & Montana.  Of course I could keep on going, & going, & going here but I don't think there's enough ink left in my keyboard to type it all out.   But the majority of all those places & adventures have been recorded of course & are all right here in words & photos in my 2,766 posts stretching back as far as 2006/07.  Not daily posts for the first few years but many posts since then nonetheless.  Wonder what we would have seen sitting in the house here in Bayfield these past 9 wintery seasons.  I’m guessing a lot of television…………..:)) 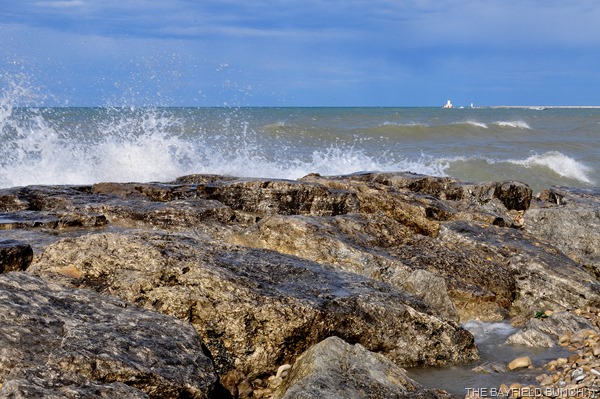 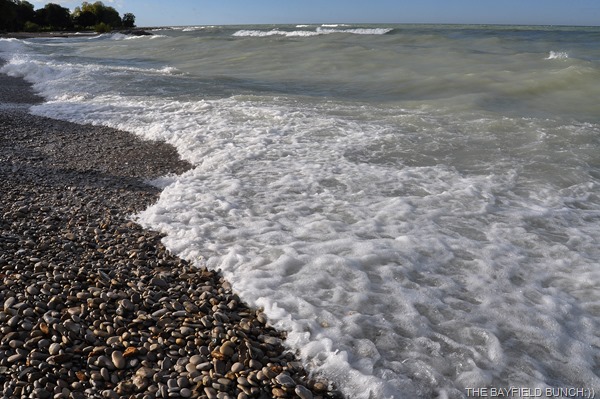 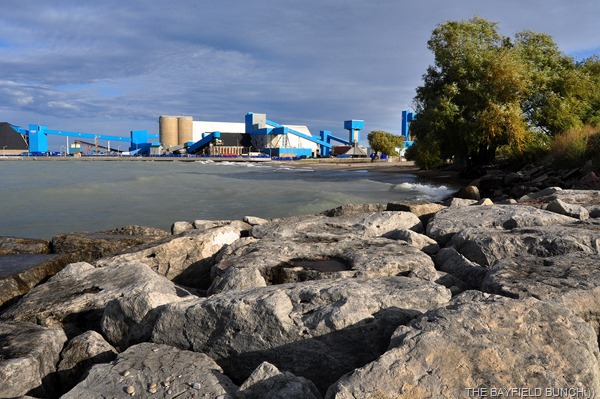 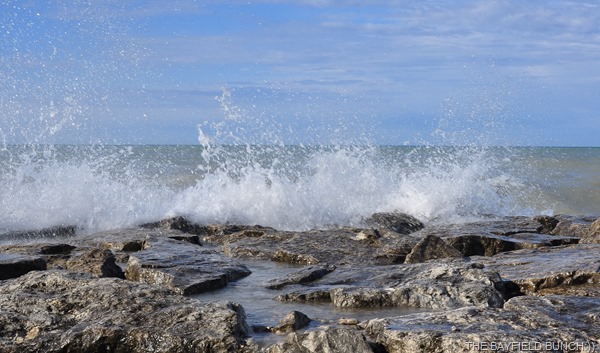 One day we will no longer have an RV & we will once again be forced either by health concerns or financial restrictions to again spend our winters at home here in Canada.  Maybe a 2 week vacation in Florida or something.  Fly down, fly back & that’s it.  For me the adventure will be gone then & the only thing left from our great RV lifestyle will be my memories, my writings, & my many photos.  Sure glad I decided way back when to record all these marvellous, marvellous, days………………………..:)) 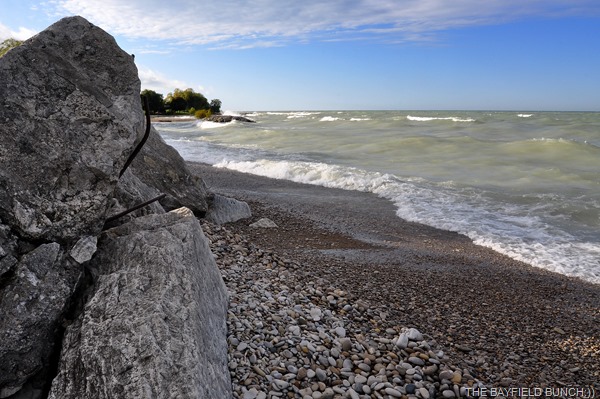 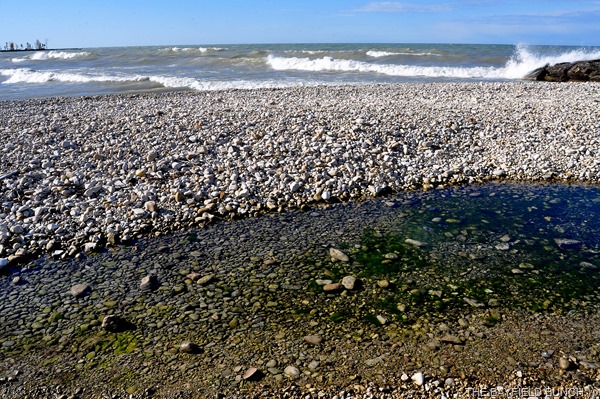 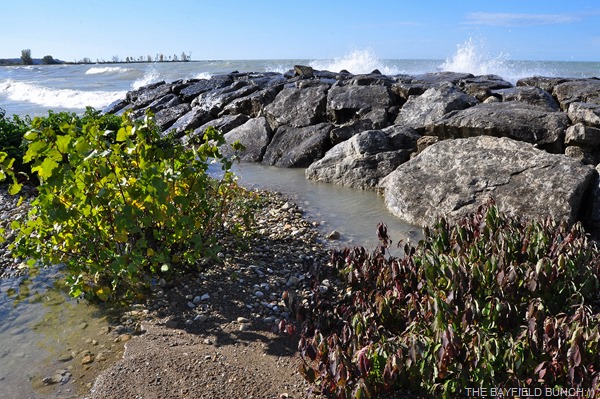 Pretty quiet day around our house today as our unpredictable weather pretty much kept us inside.   Think our temperatures hung around the 45F mark so with all the rain it felt cold & damp outside.  That’s the kind of cold & damp that just gets right inside you & you never get comfortably warm.  Noticed dark eyed Juncos on our bird feeding platform today & I wonder if their early return from the high North is a harbinger of an early winter.  More sleet tonight again as I publish this now……………………….. 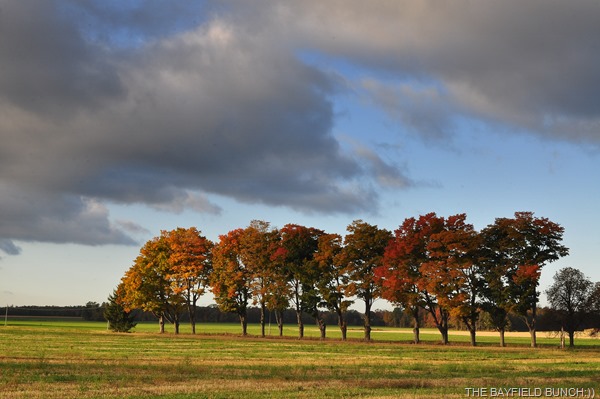 GROANER’S CORNER:((  A young couple moved into a new neighborhood.
The next morning while they are eating breakfast, the young woman sees her neighbor hanging the wash outside.  "That laundry is not very clean," she said. "She doesn't know how to wash correctly. Perhaps she needs better laundry soap." Her husband looked on, but remained silent.  Every time her neighbor would hang her wash to dry, the young woman would make the same comments.  About one month later, the woman was surprised to see a nice clean wash on the line and said to her husband: "Look, she has learned how to wash correctly. I wonder who taught her this?"  The husband said, "I got up early this morning and cleaned our windows."