‘AWWWW NUTS’………RICHARD & I GOT BUSTED FOR TRESPASSING THIS MORNING!!!! 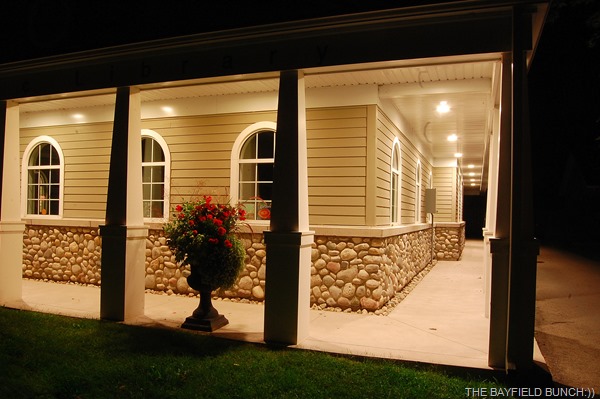 After publishing my Wednesday night post Pheebs & I took ourselves for a drive into Bayfield.  With darkness upon us earlier each evening now I thought I'd try my hand at photographing a few buildings on main street.  With summer’s season over & tourists once again out of the village Bayfield has returned to her proper self & it's a self that I so much prefer & have always liked & loved.  Main street wasn't choked with parked or driving cars & with the absence of chatter in the air Bayfield’s street was serene in it's silence.  Hardly a sole to be found anywhere.  Couple eateries open but they were very quiet with only a few folks enjoying a peaceful late evening meal.  I walked freely on the wide street with my camera & tripod setting up here & there for an occasional photo.  No hassles or interruptions anywhere.  My kinda world & I couldn't help think to myself, 'now why can't it be like this all the time'.  Of course I know why it can’t but I do like to occasionally pose those hypothetical questions to my mind now & again just to annoy myself. 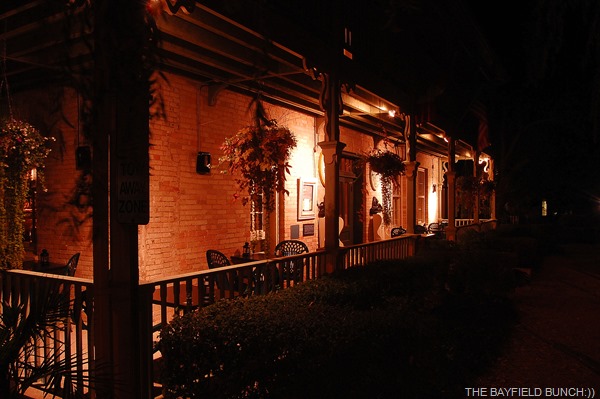 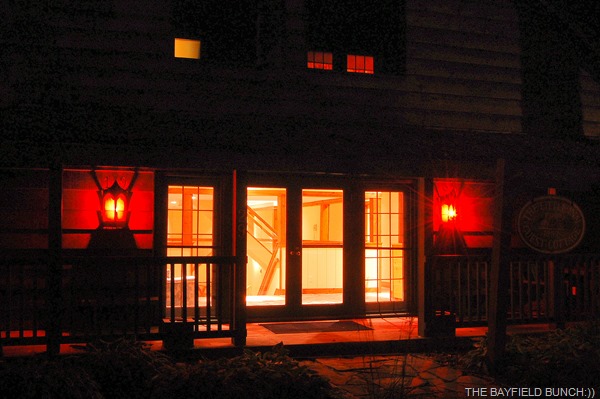 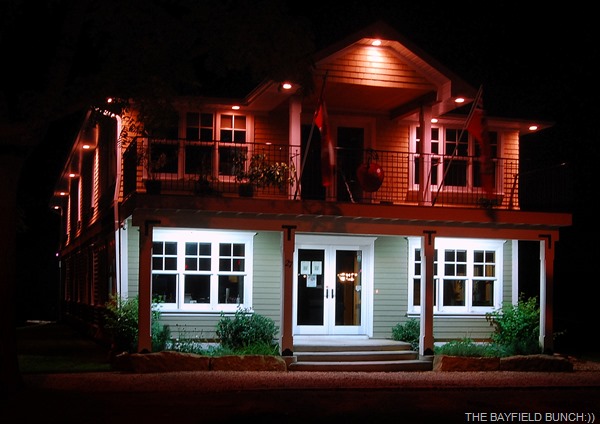 Pheebs & I did the pine forest trail this morning & how nice to once again walk in a forest free of insects & bugs.  Only sounds along our way were a variety of birds all busily tweeting each other about their upcoming migration plans. 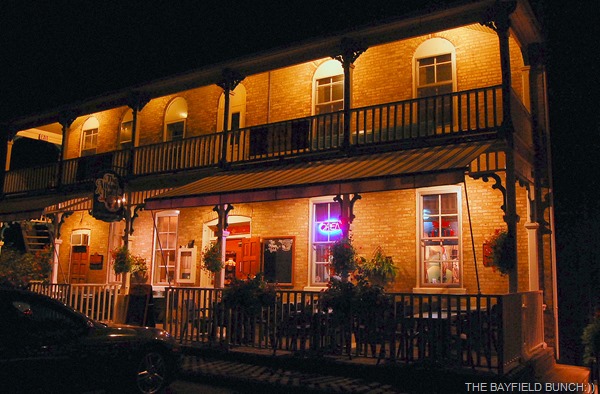 THE ALBION HOTEL IS ALWAYS THE BUSIEST PLACE ON MAIN STREET 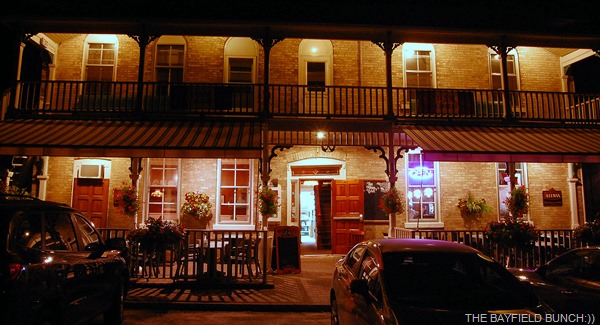 It was also our semi-monthly mobile coffee get together for my good friend Richard & I.  My turn to drive & again it was 2 hours well spent as we toured a few roads north of Goderich & Ben Miller.   There is a beach north of Goderich along the Lake Huron shoreline that Richard used to go to many years ago & I had been there once back in the late 70's & again 2 summer's ago with Pheebs one day for a walk on that beach.  As far back as Richard could remember it was always open to the public.  I suggested to Richard this morning that we take a drive up there & check out the beach.  Turned off highway 21 & followed the gravel road half a mile to the edge of a woods.  The old path to the beach was pretty over grown & we did have a bit of difficulty picking our way through the cedar underbrush down a steep & slippery slopping incline.  Minutes later an ATV comes down behind & beside us on some kind of road we hadn't even seen.  ATV pulls up in front of us about 30 feet & the guy gets off walks toward us & tells us we're on private property.  Told us he paid 2 million dollars for this whole section of land 2 years ago & we were on ‘HIS’ land!!!!!!!  We did apologize & tried to explain we didn't know that but we could tell this fella was 'put out' about us being there.  At least he let us walk back up the ATV road he had put in.  Halfway to the Jeep we did see a no trespassing sign on that road & we agreed he should have put that sign at the top end of the gravel road.  But imagine that, at our age…………. two old easy going retired Geezers out for a morning coffee getting busted for trespassing!! 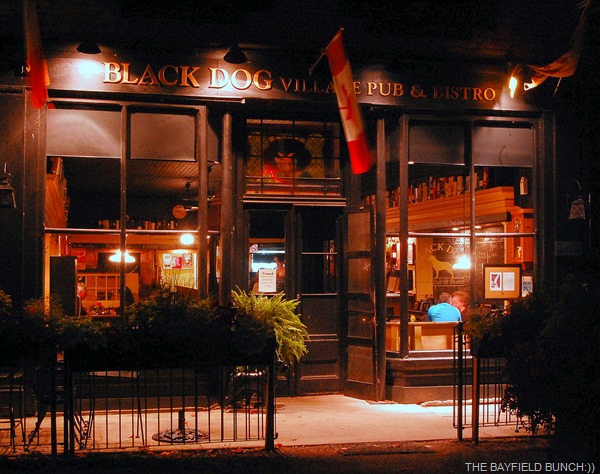 A FEW LATE DINERS AT THE ‘BLACK DOG PUB & BISTRO’

With today's long awaited & anticipated cool refreshing weather upon us I was energized both mentally & physically go ahead & tackle the job of changing the anode rod in our rig's hot water heater.  Don, the Big EEE's former owner had left us with oodles of spare parts & one of those parts was a new anode rod still in it's package.  Richard had lent me an adaptor for my socket wrench so away I went.  Should have read the package first where it says when loosening the old rod don't stand in front of it.  I stood in front of it.  Seconds later I was totally soaked as the pressure blew a big blast of water all over me.  Lesson learned.  Despite my past record of not doing well with mechanical things I did manage to install the new anode rod successfully & yes I even used plumbers tape on the threads.  Fired up the water pump, pressurized the lines & by golly........no leaks.  Well that was a surprise I can tell ya.  But a nice surprise for a change:)) 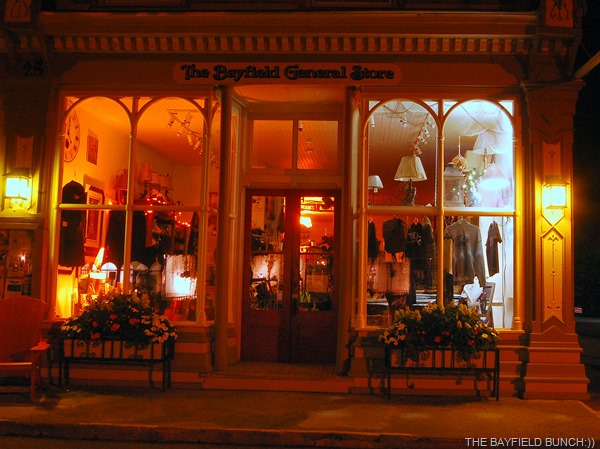 Kept myself on the straight & skinny today with a home made bran muffin for breakfast, 3 breaded chicken fingers & a cold slice of pizza for lunch.  Supper consisted of a heaping bowl of Kellogg’s Mini-Wheats topped with a dump truck load of Honey Nut Cheerios.  And of course an after supper snack saw me with a big whack of peanut butter & honey on a flat bread Tortilla.  Groovy:)) 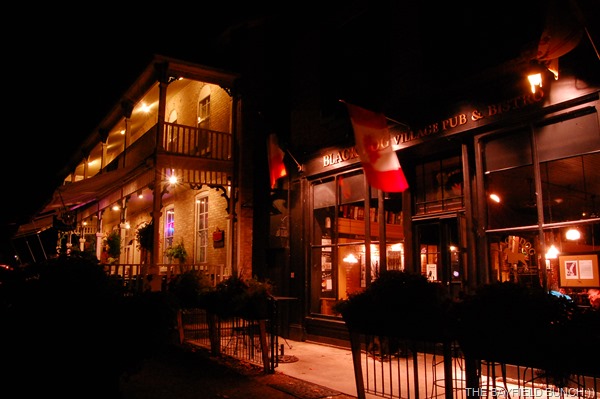 And this is my Son Sean’s latest video.  He wrote this song, composed & played the music for it then appeared in the video singing with a friend & fellow musician.  Song is entitled, Weightless and Empty.  Sean says, “This is a song I wrote a few months ago and when it was done, I knew I had to get my good friend Stacey to sing it with me”.

GROANER'S CORNER:((  The trendy dresser fancied himself quite a ladies' man, and was delighted to find a note pinned inside a new shirt. It contained a girl's email address, and asked the recipient to send a photograph. How romantic, he thought to himself, very taken with the idea of this mystery woman so eager to meet him, and promptly sent an email with a photo.  Heart aflutter, he opened her response when it arrived.  It read, "Thanks for writing. I was just curious to see what kind of guy would buy such a goofy shirt."

Call to the local newspaper's classified editor:   "I have a complaint about an ad I placed."  "I'm so sorry, sir. What was the problem?"  "You'd think a newspaper in a rural community like this one would have people on staff who had spent some time on a farm. What I said was 'ewes'. E-W-E-S."   "Pardon?"   "Ewes. It makes a difference to some people."   "I don't follow."   "The ad in the paper read: "Sheep for sale - USED."