ACTUALLY WOKE UP WITH A PLAN THIS MORNING & IT INCLUDED OTHER PEOPLE………WHAT!! 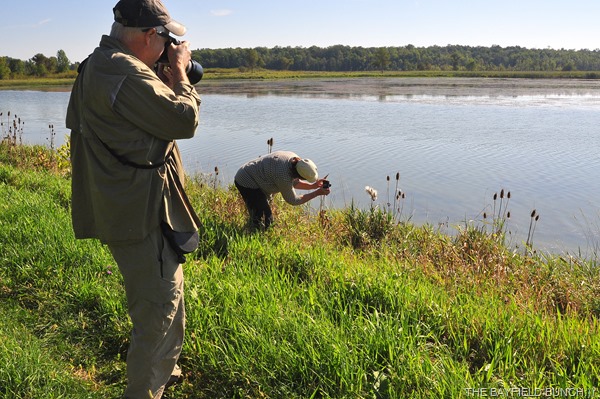 I woke up with a plan this morning & holy smokes those plans even included other people.  Caron & Chris had expressed an interest in seeing the Hullett-Marsh so at 9 a.m. they dropped over with Dixie & we had us a 2 vehicle convoy over to the Marsh.  Of course Pheebs & I had our customary swing through Tim Hortons before we all headed the short distance to the Marsh area. 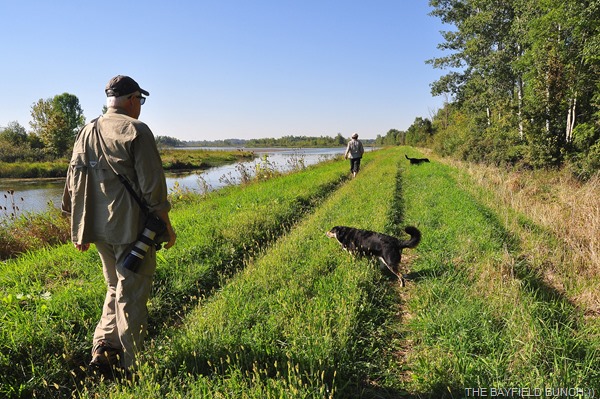 WALKING ALONG ONE OF THE DYKE TOPS 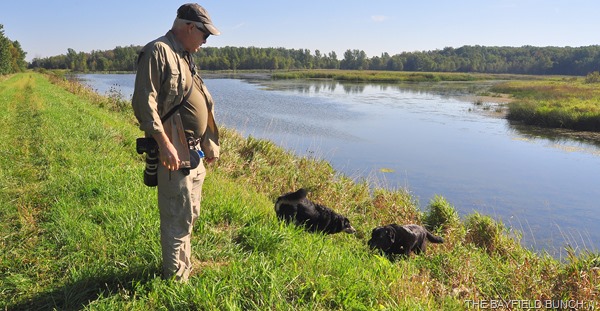 With Caron, Chris & Dixie following in their silver gray Honda I led them about half way around the perimeter of  the swamp before turning into a long laneway leading to a parking lot.  From there we were on foot for a half hour walk along the top of a grassy dyke.  Most critters kept out of photo range but we did see some Great Blue Herons, Canada Geese, Ducks, a few water birds, turtles, some unknown Beetles, lots of leopard frogs, Cormorants, a Sea Gull or two & probably a few things I've already forgot about.  Normally I don't see as many things on my own but with Caron & Chris's eyes pointing things out I was able to see much more than I usually do. 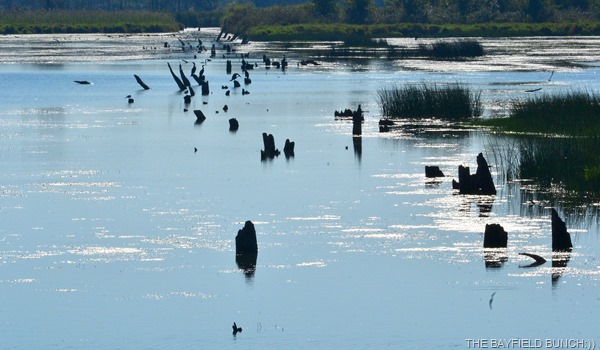 WHEN I TOOK THIS PHOTO I WAS SEEING ONLY STUMPS…..UNTIL CARON POINTED SOMETHING OUT 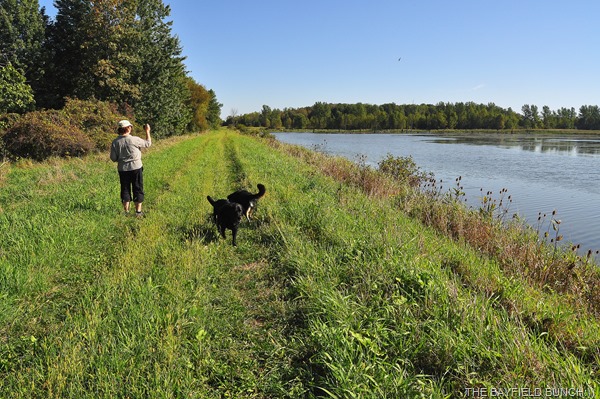 TURTLE RIDING ON A SHARK 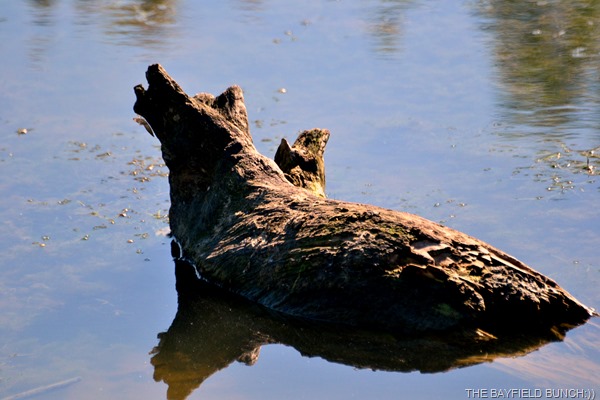 Unlike Pheebs Dixie was in the water for a swim several times but was all dried off by the time we made it back to the cars.  We walked a little further along the dyke than Pheebs & I usually do so even I got to see a few new things.  Like a wasp nest Caron pointed out as well as some strange looking Beetles she spotted on some Milk Weed plants.  At first we thought they were Lady Bugs but on closer inspection we could see they were something different.  Skies were clear & the heat of day was beginning to build so we moved out & drove around to another section of the Marsh & had a look at an old overhead iron bridge. 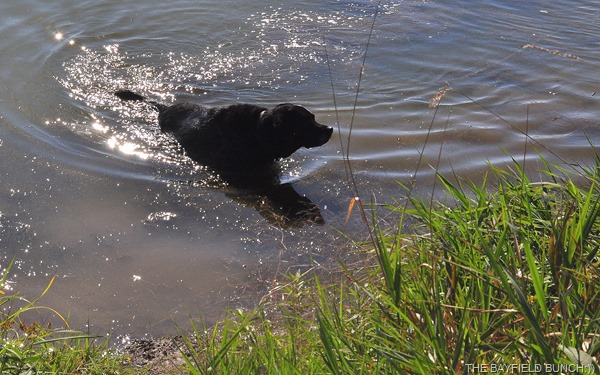 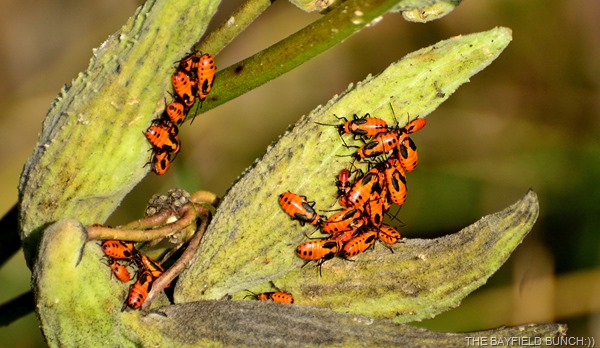 WE COULDN’T FIGURE OUT WHAT THESE STRANGE LOOKING BEETLES WERE 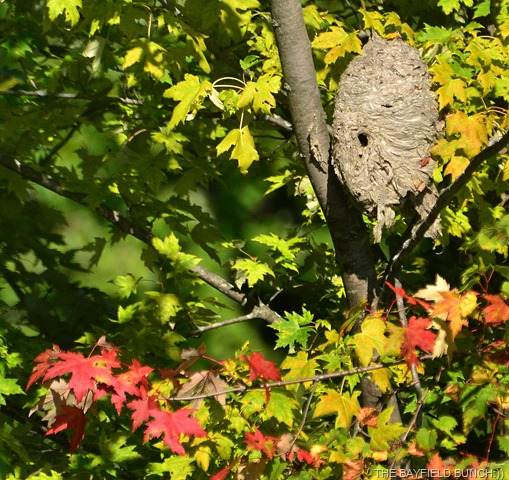 One last section of the Marsh where we parked & again took a short hike along one of the dykes.  Caron & Chris needed to be back by 1 o'clock so about noon we made our way about 2 miles back to Clinton dropped into Tim Hortons for a bite to eat.  Luckily for me Chris said he's buy lunch because I was standing in front of the menu board with a measly $5.35 in my pocket.  Cheapest thing I found on the board was a grilled cheese sandwich for $3.99 so my mind was on overtime trying to figure out how much tax would be added to that.  One miscalculation & I would have been behind the counter with an apron on sweeping up donut crumbs.  Chris & I both had a Chicken Wrap while Caron settled for a Bagel.

We were back to our place in good time before Caron & Chris's 1 o'clock appointment.  All & all we had ourselves a mighty fine morning & how nice to see Dixie & Pheebs enjoying their outing as well.  It wasn't long after Caron & Chris left I was into my recliner for a short afternoon Siesta.  Pheebs too.....right on my lap:)) 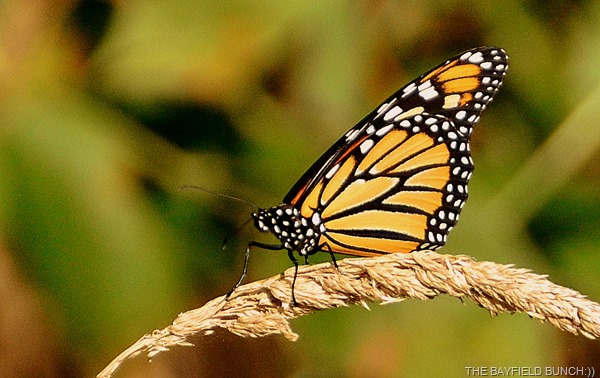 Kelly called tonight & said she decided to head home Saturday morning which I thought was a good decision as opposed to Friday morning when traffic along her route as well as the border would be at it's heaviest.  Some of the busiest traffic in all of Canada runs along that corridor between Toronto, Hamilton, & the Niagara Falls/Buffalo area. 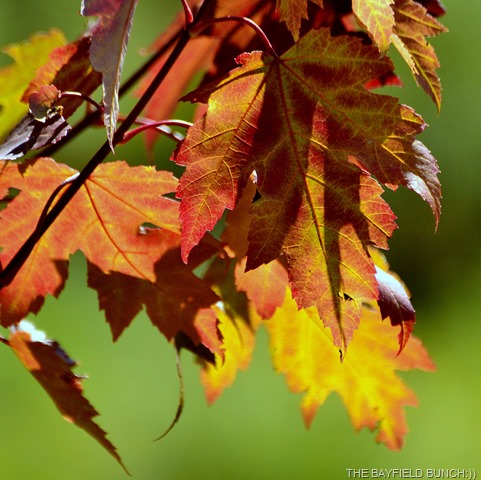 Kelly asked me if I had picked up the mail.  Mail??  Oh Dear I hadn’t even thought of the mail for over a week.  Well I had better get up to the mailbox & check that out so loaded up the Pheebs & off we went half way round the block to the mailroom.  First time I’d been in our mail room in probably a couple years.  Good thing Kelly reminded me of our box number or I never would have found it.  Mostly ad flyers but one of those flyers was for a $3 hamburger at HARVEYS & by golly they have a Harvey’s in Goderich & they do build a good burg.  And double by golly Pheebs & I had another mission & without further ado we were off to Goderich.  Besides, the half dozen cold fish sticks we had for supper just weren’t cutting it anyway.  About half way there I thought to myself, ‘oh geeeezzz do I still have that $5.35 from this morning.  A quick check of my wallet & pants pocket told me I did so we were good to go.  Burg came to $3.15 & we were laughing.  Meant we had a whopping $2.20 left over & that was just about enough to get us both into some serious trouble if we needed to.  Had a few things to pick up in Wal-mart anyway so with cash-back I restocked the larder.  Now we had a whole $10.  Oh, & while at Harveys I luckily remembered something a reader had said a few days ago about me not eating my ‘greens’ this week so I had the girl fixin up my burg throw a big double dollop of relish on the burg as well:)) 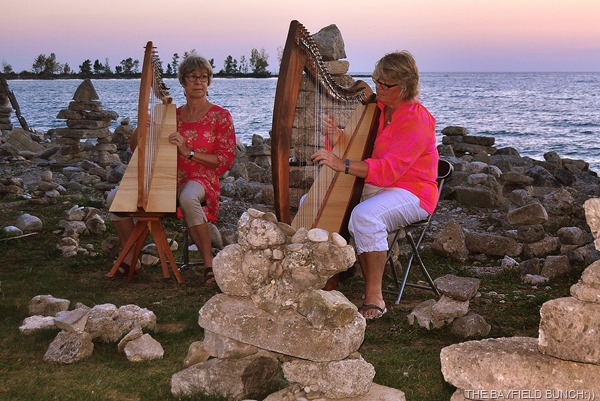 Sun was all but down by the time we made it to the harbor & beach area but I did manage a few pics.  By the way all the Inukshuks along the shoreline were  knocked down a couple nights ago.  Totally levelled I hear.  Figured that would sooner or later happen & it did.  That was the down side but here’s the up side.  Just as fast as someone knocked them all down people have been springing them up again & I was surprised to see so many had already risen from the ashes so to speak.  Amongst the Inukshuks sat 2 ladies just finishing up playing their harps.  Caught few melodic angelic harp string sounds & managed a few photos before they called it a day.  Heard one of the ladies say the harps were made in Nova Scotia with one being Cherry wood & I think the other one was made of Walnut.

GROANER’S CORNER:((  "Well," snarled the tough old sergeant to the bewildered private. "I suppose after you get discharged from the Army, you'll just be waiting for me to die so you can come and spit on my grave."  "Not me, Sarge!" the private replied. "Once I get out of the Army, I'm never going to stand in line again!"