A FEW PHOTOS ON A SLIGHTLY MISTY MORN 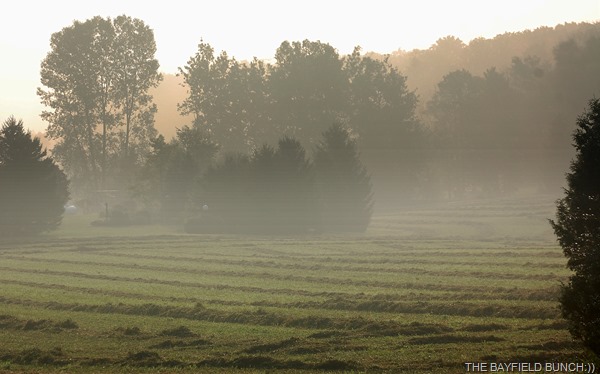 TWAS A MISTY MORN WE SET OUT UPON EARLY TODAY

Knowing it was going to be a hot sticky day Pheebs & I didn't waste any time cranking up the Jeep for our morning outing.  We were out the door & down the road before 8 a.m. & already we could feel the heat building. 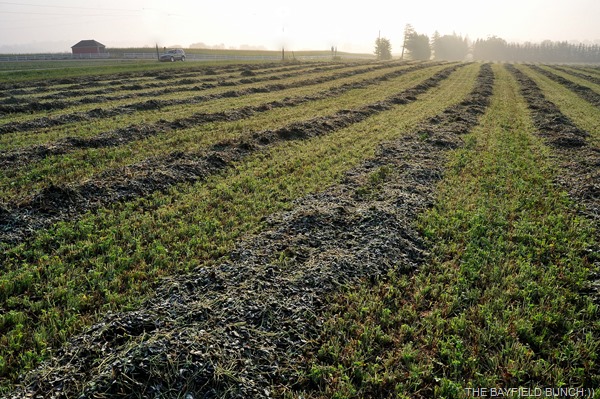 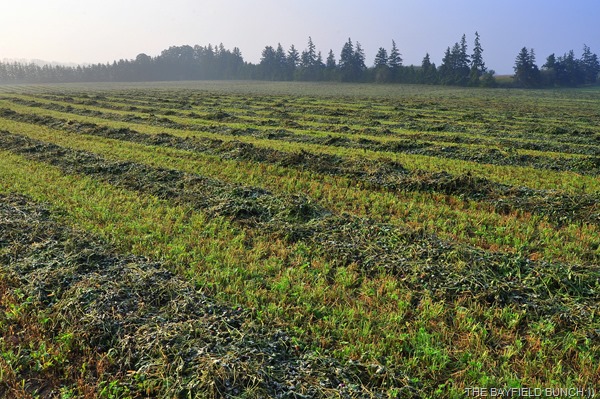 Huron Counties Hullett-Marsh lay quietly wrapped in an early morning haze as Pheebs & stepped out of the Jeep for a walk alongside one of Hullett’s wetland areas.  Spotted a white Egret winging it's way low over a distant stump filled pond & a closer look across the open watered marsh revealed 4 Great Blue Herons in various locations doing their best to blend in with the background.   Sensing our presence 3 soon took to the air while one remained unmoving but watching our every step.  I was surprised at the absence of Mosquitos, bugs, & biting Deer Flies.  Several flocks of Canada Geese overhead made several passes while a couple shore birds waded in shallow water stopping to pick up something here & peck at something there.  But alas the morning’s heat soon had us retreating back to the coolness of the Jeep.   With all windows down we were soon back on the road rolling slowly through our picturesque countryside once again snapping a few more barns along the way for my ever growing OLD BARNS collection.  Couple hours later we were home again.  Sure do enjoy our morning Jeep cruises:)) 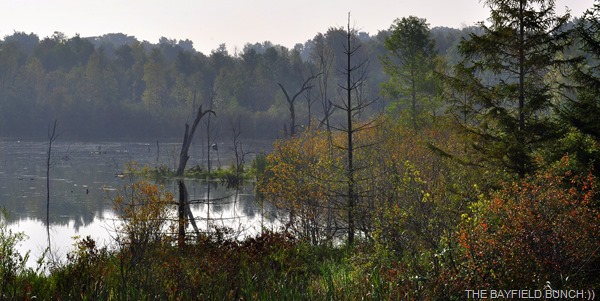 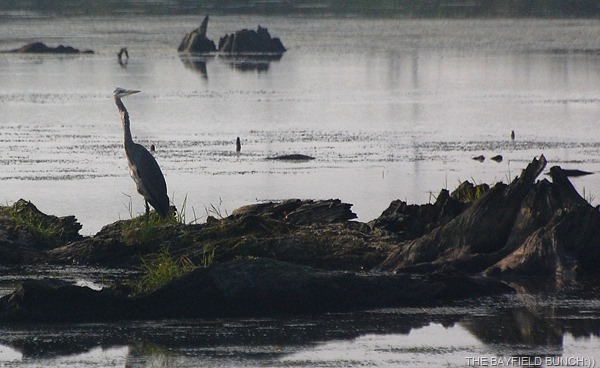 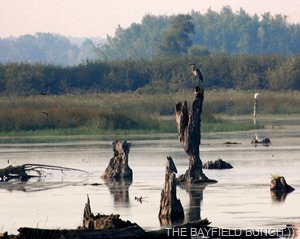 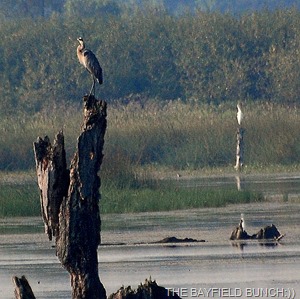 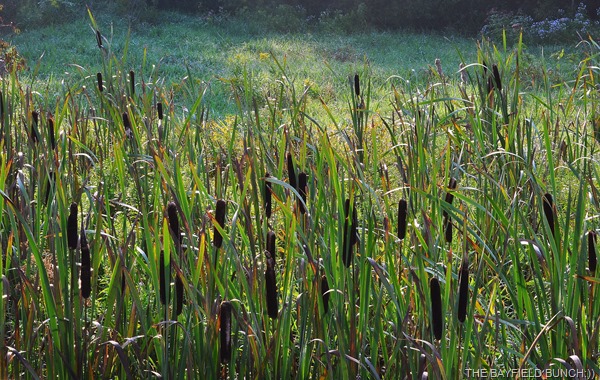 Now that we have decided to sell our Congress house we have to re-think how we will pack the Motorhome for our journey south next month.  First thoughts are to travel very light keeping in mind we will be bringing some things home from the house next Spring.  So many things to think about now & so many things to plan for but that's OKay because change is mostly always exciting. 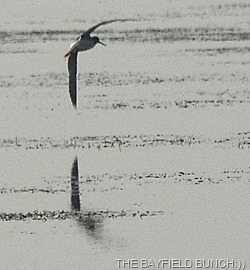 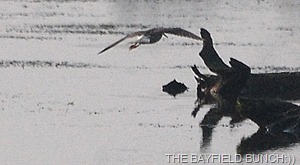 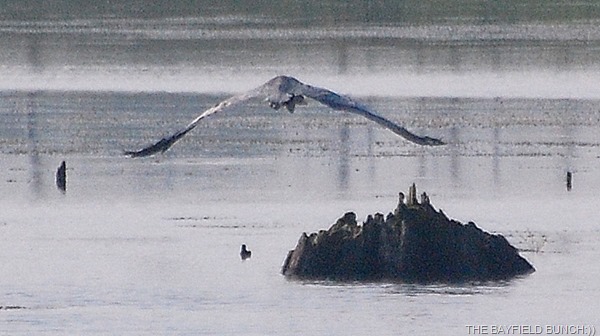 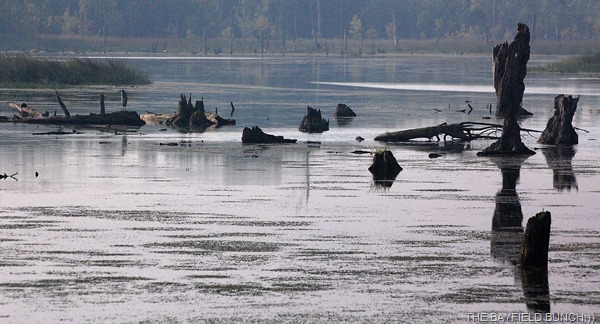 AND YES THERE IS A GREAT BLUE HERON IN THIS PHOTO…..IT’S TO THE LEFT

As to how much we will list the house for we just don't know yet at this early stage.  We have no idea how the housing market is doing around that area at the moment & local real estate listings for Congress are not showing enough similar saleable houses with property for us to get a ball park idea.  We have already had several inquiries & as soon as we are able to get a realistic idea on pricing we can let interested people know. 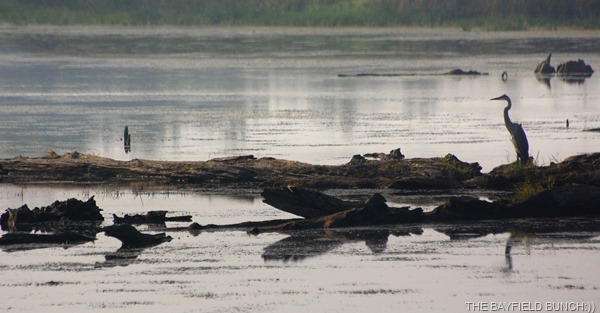 Looks like our hot uncomfortable weather is going to be with us for at least another week before cooler Autumn air sets in & hopefully that will be it for the hot stuff until next June or July sometime. 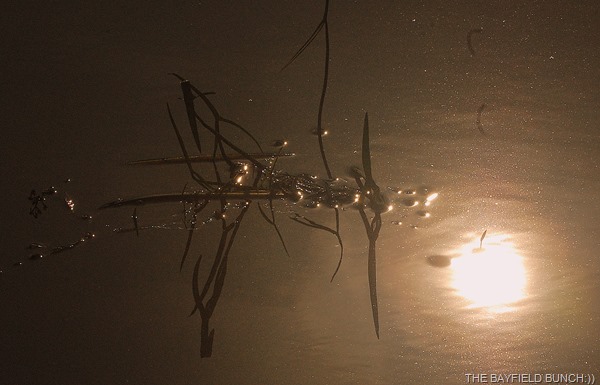 Time is slipping along so fast I have been getting behind.  It took my Aunt Jean 1,500 miles away in Sarasota Florida to remind me on the phone Tuesday night that yes indeed it was actually Tuesday.  I had just spent my whole day thinking it was Monday.  Jean managed to play another 9 holes of golf Tuesday morning:)) 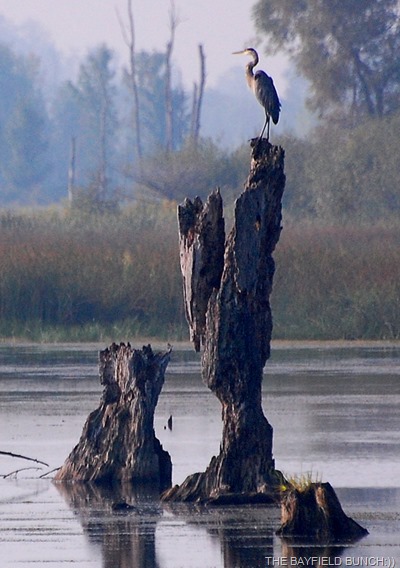 --- Nineteen Newfies go to the cinema, the ticket lady asks "Why so many of you?"  Buddy replies, "The film said 18 or over."

--- My daughter asked me for a pet spider for her birthday, so I went to our local pet shop and they were $70.  Forget it, I thought, I can get one cheaper off the web.

--- An East Indian fellow moved in next door. He travelled the world, swum with sharks, wrestled bears and climbed the highest mountains.  It came as no surprise to learn his name was Bindair Dundat.