JUST GOT THE JEEP’S DECALS ON IN TIME AS THIS MORNING I ENCOUNTERED A FARMER…….ON HIS PROPERTY ‘OH-OH’ 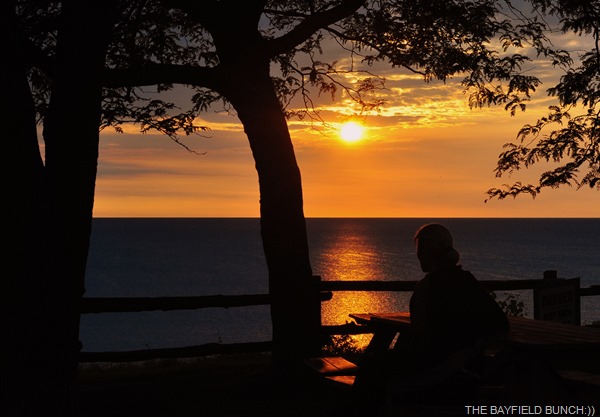 Despite Saturday night's cloud cover I did take a drive over to Bayfield's Pioneer Park to see if London’s ROYAL ASTRONOMICAL SOCIETY had came to Bayfield anyway & they had.  Nice sunset over the lake as a couple fellas set up two telescopes just in case the clouds parted later.  There was a bit of clearing in the East.  Waiting for darkness I did manage a few sunset photos as well as a few candid pics.  Probably about a dozen people there to watch the sun go down. 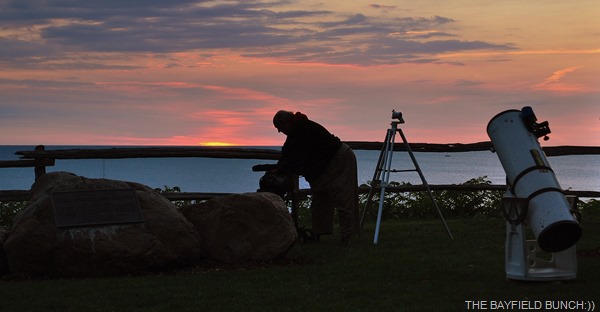 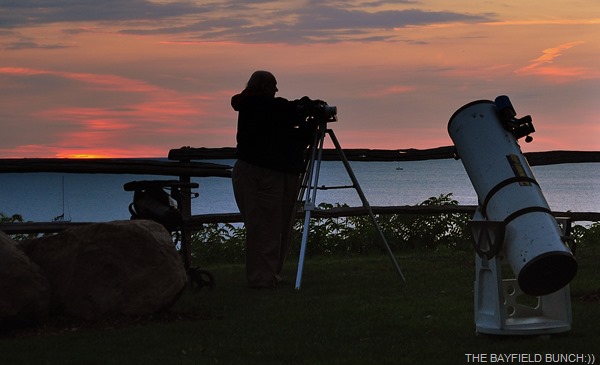 LARGE WHITE SCOPE IS A 12” REFLECTOR TYPE..…I ONCE HAD AN 8” CELESTRON SCOPE BUT IT WAS TOO LARGE FOR CARRYING AROUND IN AN RV SO TRADED IT FOR THE SMALLER NIGHTHAWK 80mm SCOPE I HAVE NOW 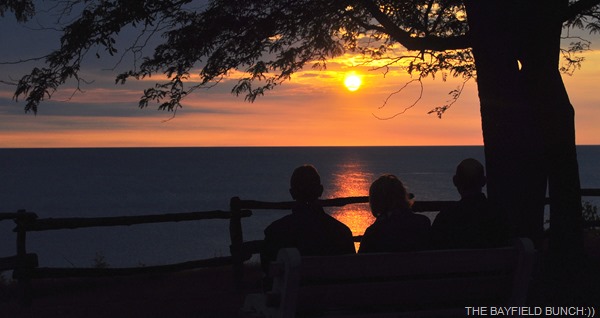 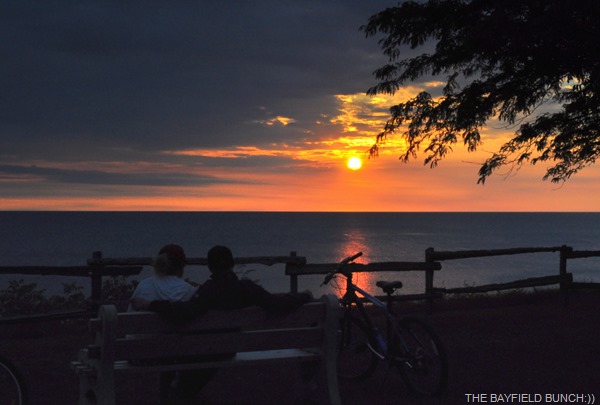 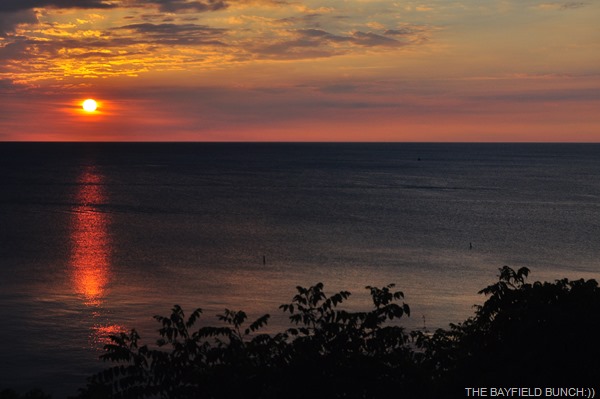 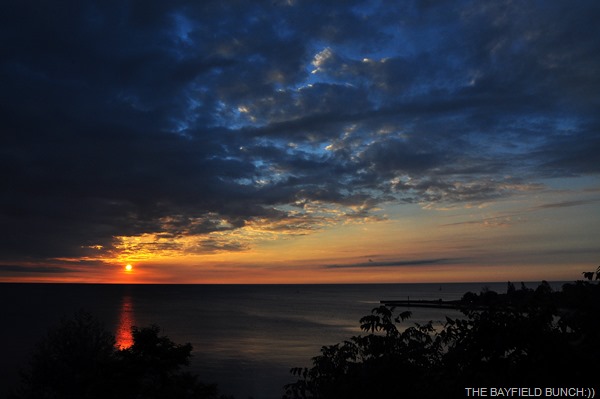 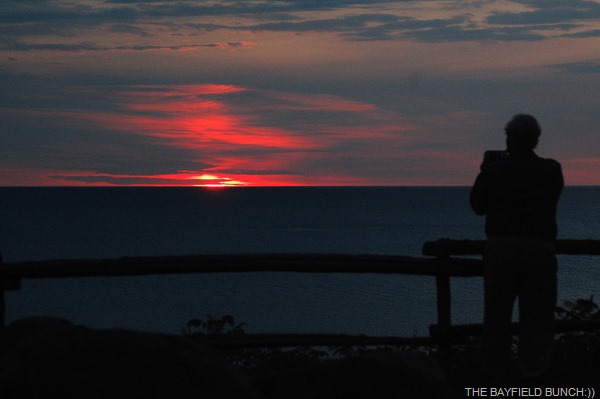 As darkness fell one of the Astronomy fellas set up an image presentation on a large gray sheet tied between a couple poles.  I think he used a digital projector.  Theme of his presentation was the Hubble Telescope & he gave a talk along with images on Hubbles history & followed that with slides of Planets, Nebulas, Star Clusters, & other various deep space objects.  Great pictures & an interesting talk by a knowledgeable Astronomer.  I stayed for as long as I could but with no place to sit down I found standing in one spot for over half an hour was beginning to bother my legs.  Normally I would have simply sat down on the grass but with my recent bout with dizziness I figured I had better just stay on my feet.  Despite the cloud cover about a dozen people turned out for the slide presentation. 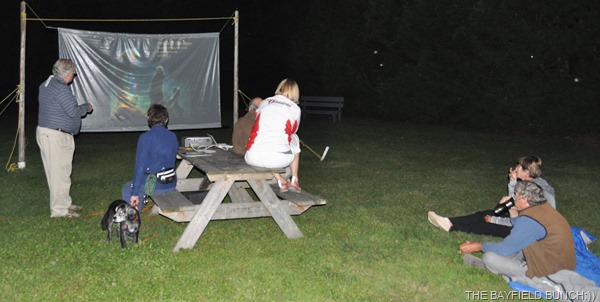 FELLOW ON LEFT IS THE KNOWLEDGEABLE & EXPERIENCED ASTRONOMER FROM LONDON…..I DIDN’T CATCH HIS NAME 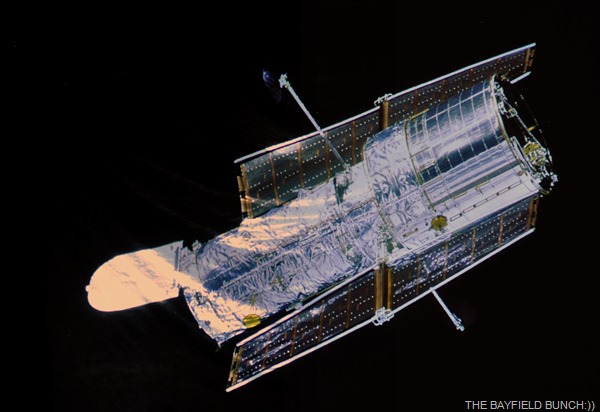 HUBBLE SPACE TELESCOPE…..I TOOK THESE PICS OFF THE SCREEN HE WAS PROJECTING THE IMAGES ON 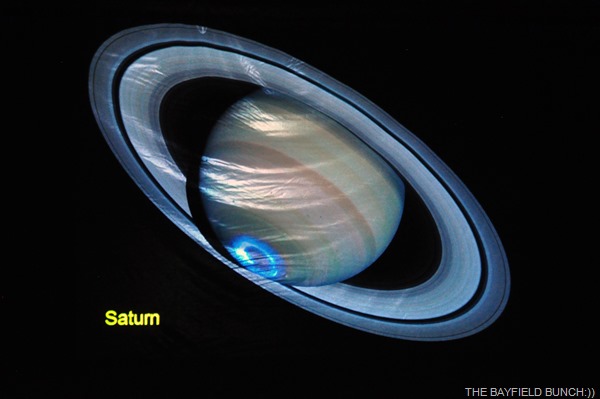 SATURN AS PHOTOGRAPHED BY HUBBLE 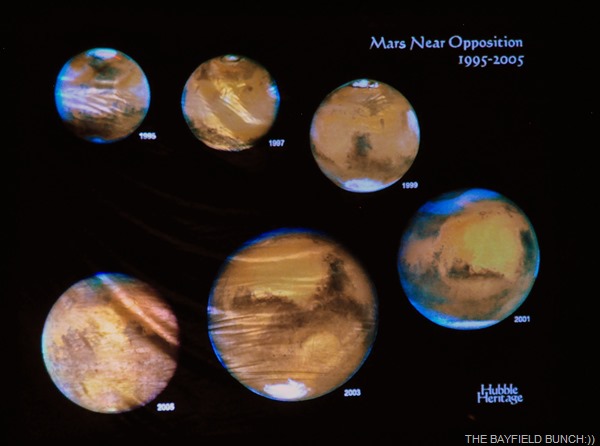 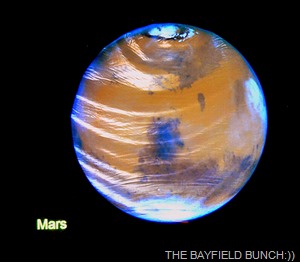 A few stars did finally become visible overhead so don't know if they got to see anything later through the telescopes or not because I finally had to step back into the darkness & quietly slip away making my way back to the Jeep.  Felt sooooo good to get off my legs & sit down in that soft Jeep seat.  A few minutes later I was home.  Took Pheebs out for a few minutes, forgot about my dizziness problem & bent right over & down to scruffle her ears.  Became aware instantly things were beginning to slowly spin so stood right up & fixed my gaze on a Cedar tree branch ahead of me & the slow spin stopped. 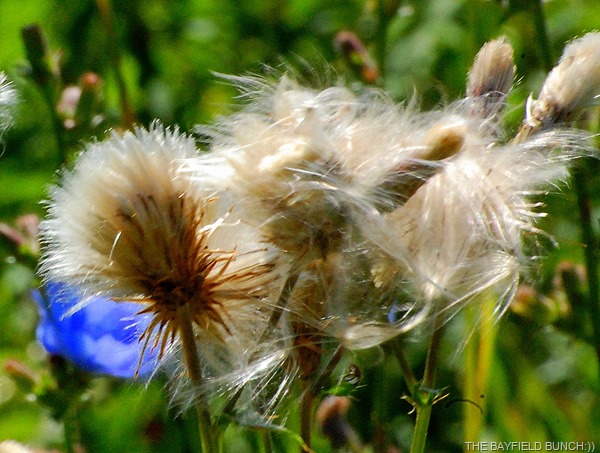 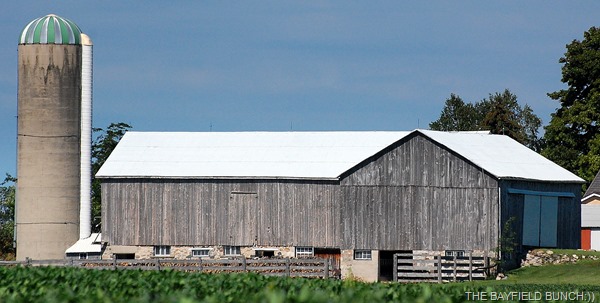 ANOTHER HALF DOZEN BARNS THIS MORNING 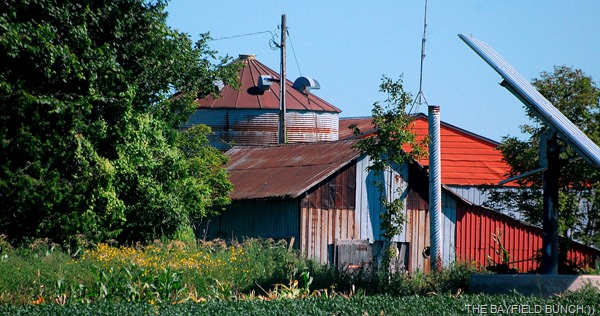 Spent the night in my recliner & woke up feeling very tired again & a little under the weather.  Our cloud cover cleared around 9 so figured I'd take Pheebs for a short  country drive & see if that would pick me up.  Grabbed a coffee & muffin in Clinton & headed out but after about 10 minutes I felt like just going home.  On the way I drove up a dead end section of country road & parked the Jeep.  Wanted to get Pheebs out for a run & I was needing a leg stretch anyway.  Beautiful sunny Sunday morning with a warm breeze & a picture postcard rural green landscape stretching out before us as far as the eye could see.  Just kinda one of those special moments.  And then I was an ATV heading for us................... Oh-Oh 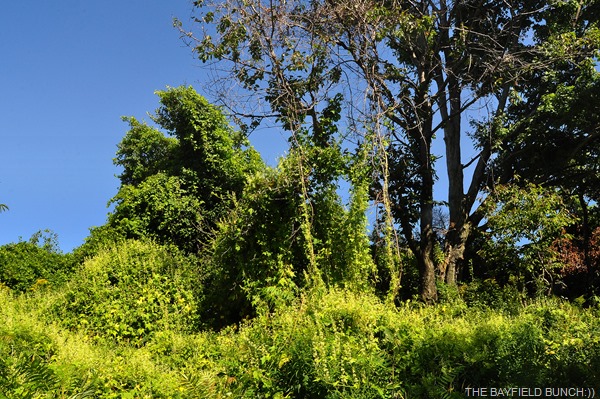 CERTAINLY HAS BEEN A LUSH GROWING SEASON 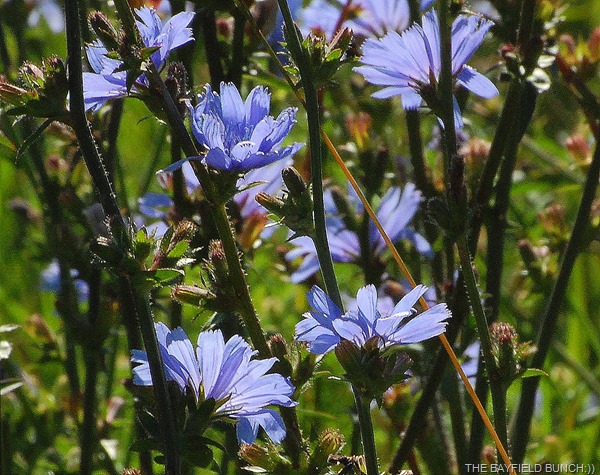 I right away suspected it was a farmer coming to see what I was up to & sure enough he pulled alongside & shut off his engine.  Thought it very coincidental that in my Saturday post I had talked about that very thing happening & the reason I like to have our bayfieldbunch decals on the Jeep.  Well I needn't have worried because this fellow turned out be a very friendly chap.  In fact he reminded me so much of our good Montana rancher friend Mike Clark. (JANNA & MIKE) Same laid back manner with an easy personality & he even looked a lot like Mike.  This fellow who's name was Herb could easily have passed as Mike’s brother.  We chatted about a bunch of things & when I expressed my interest in photography & always looking for interesting things to photograph he said, "well if ya got a minute I can show you an Eagles nest".  With that he led the way in his ATV down a long winding lane through forest & dell over hill & dale until we finally reached a clearing right beside the Maitland River.  We were still on his property & he had cleared & fixed up a spot beside the river where he had a 37' Travel Trailer set up.  Just the most peaceful spot you could imagine with the sound of water tumbling gently over rocks in the slow moving river.  He pointed across the opposite bank & a tall tree saying that is where the Eagles nest is.  Despite summer's leaves I was able to get a shot of where the nest was.  He said 3 sizeable baby Eagles had just flown the nest a few weeks ago.  We chatted for a bit more then it was time for Pheebs & I to be on our way.  I led the way back up the lane with Herb following in his ATV.  Winding along I saw a white pick-up truck ahead blocking the way but it was OK as I stopped & Herb drove up from behind & introduced me to his son.  Minutes later Pheebs & I were once again on our way home.  Twenty minutes later we pulled into our driveway.  Had planned on washing the Jeep but just didn't have the energy to do it. 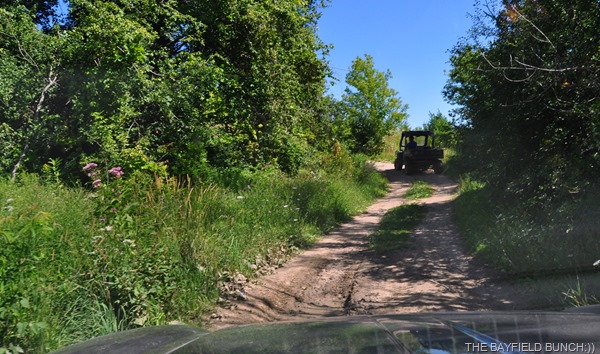 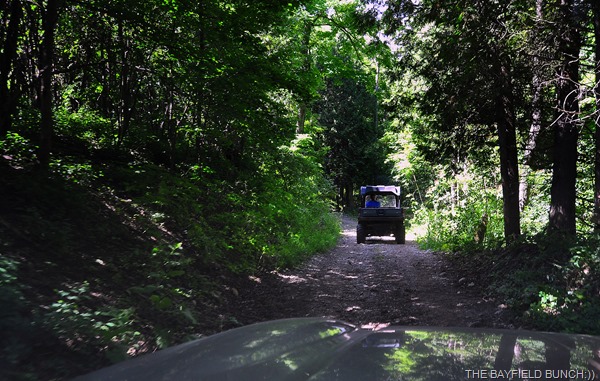 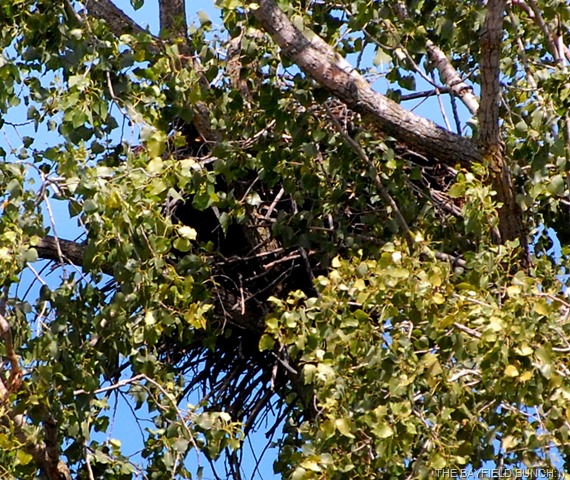 EAGLES NEST ACROSS THE MAITLAND RIVER 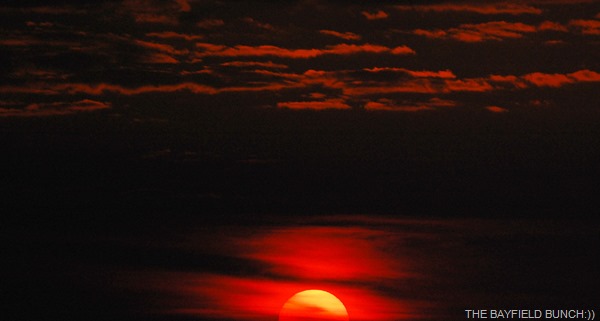 GROANER'S CORNER:((  Several days ago as I left a meeting at our church I reached in my pocket looking for my keys. They were not there nor in any of my other pockets. A quick search in the meeting room revealed nothing. Suddenly I realized, I must have left them in the car. Frantically, I headed for the parking lot.  My wife has scolded me many times for leaving the keys in the ignition. My theory is the ignition is the best place not to lose them. Her theory is that the car will be stolen. As I burst through the doors of the church heading outside I came to a terrifying conclusion. Her theory was right. The parking lot was empty.  I immediately called the police. I gave them my location, confessed that I had left my keys in the car, and that it had been stolen. Then I made the most difficult call of all.  "Honey," I stammered. I always call her honey in times like these. "I left my keys in the car and it has been stolen."  There was a period of silence. I thought the call had been dropped, but then I heard her voice.  "Ken," she barked, "I dropped you off!"  Now it was my time to be silent.  Embarrassed, I said, "Well, would you come and get me?"  She retorted, "I will as soon as I convince this policeman I have not stolen your car" !!!!!!!!!!!!!!