FOUND A TABLE FOR THE RIG & A STEP BACK IN TIME AS WE ARE SURROUNDED BY YESTERYEAR & MAYBE A GHOST OR TWO……….. 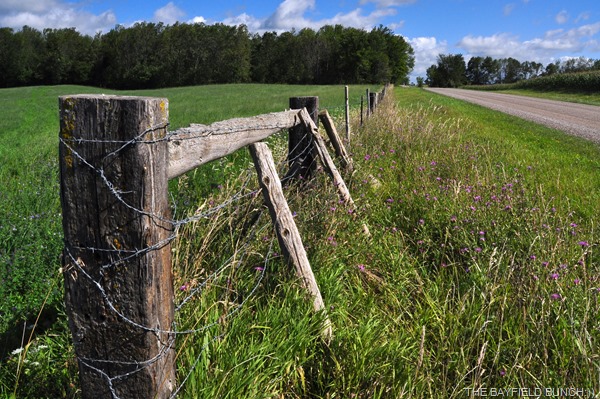 Rains ended before morning so we started our early day under sunny skies & big white puffy clouds.  With Pheebs in the back seat Kelly & I headed out about 8:30 heading northeast to Wingham Ontario & the well known WINGHAM SALES ARENA.  Knew of a place there with used furniture & figured it might be a good place to find a small table for our rig.  And it was.  Not exactly what we had in mind but it's a solid wood top with sturdy metal legs & it was only $20.  We still had one other place to check out just in case we found a better table so we slowly made our back in the direction of Goderich.  Took our time slipping along some back roads stopping for a few barn photos & a leg stretch along the way. 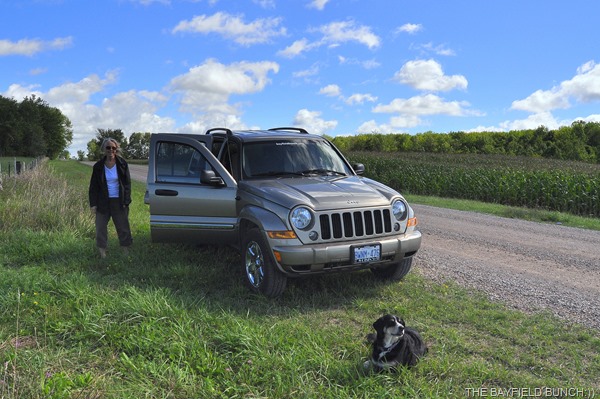 STOPPING ALONG A COUNTRY ROAD THIS MORNING FOR A LEG STRETCH BETWEEN WINGHAM & GODERICH ONTARIO
Rolled into the LAKESIDE FLEA & FARMER'S MARKET on highway 21 just north of Goderich Ontario around 11:30.  We had been to this place before about 10 years ago & I had forgotten just how big this place really is with it's huge barn (formally a large swine operation) chocked full literally from floor to rafters with countless thousands of just about everything one could imagine being for sale at a huge flea/antique/farmers market.  This is truly a fascinating place which will instantly transport anyone entering back in time.  Walking these subdued sometimes slightly crowded aisles is a true trip down memory lane & I would recommend anyone looking for authentic fine old antique furniture to stop by.  Better bring your lunch along though & a cell phone because it may take you awhile to find what your looking for & that cell phone might just come in handy if you get lost somewhere in the huge barn with it's two levels of just about everything old & antiquely.  We saw numerous hidden treasures this morning & the feeling I had walking around inside this large barn building was the same feeling I had walking through Tombstone Arizona's Birdcage Theater years ago. Kinda spooky.  With all the old pieces of furniture sitting in quiet slightly dusty corners covering just about every square foot of floor & wall space I couldn't help but feel the long ago & long departed owners of these furniture pieces still hovering nearby close to their once long treasured memories. 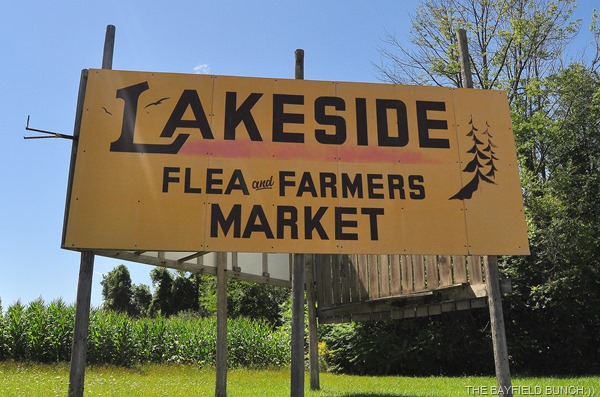 THAT LARGE BARN IS FULL OF JUST ABOUT EVERYTHING 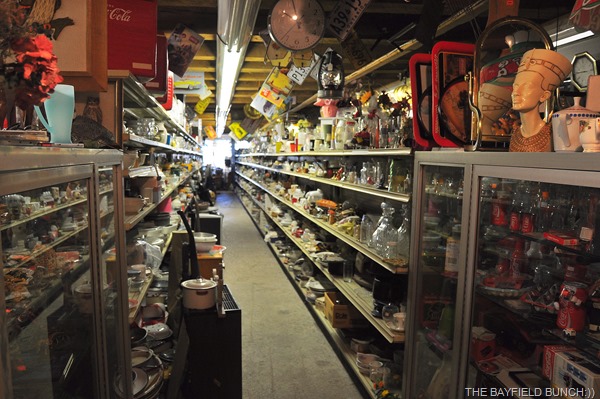 THERE’S PROBABLY ABOUT 6 LONG ISLES LIKE THIS IN ONE SECTION OF THE BARN WITH LITERALLY THOUSANDS OF ITEMS…..I THINK KING TUT HIMSELF MAY BE HERE SOMEWHERE 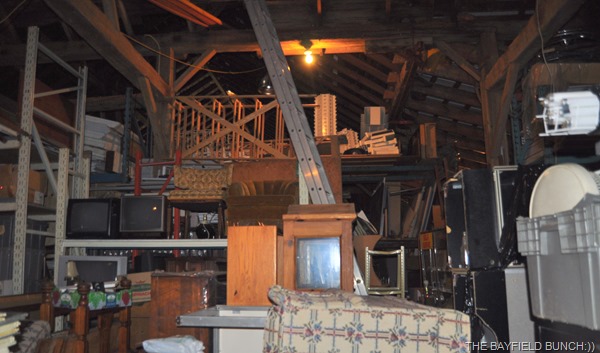 PILED TO THE RAFTERS WITH SOMETHING FOR JUST ABOUT EVERYBODY……SOMEWHERE 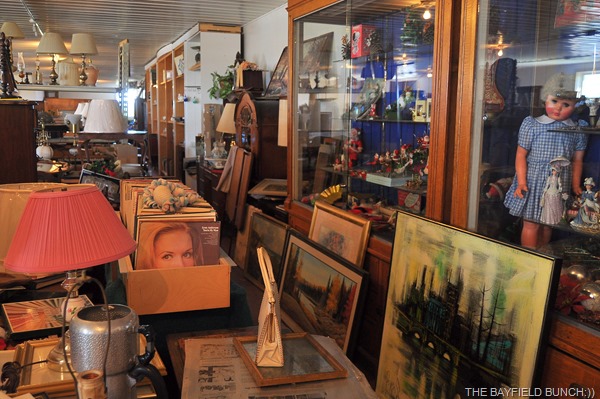 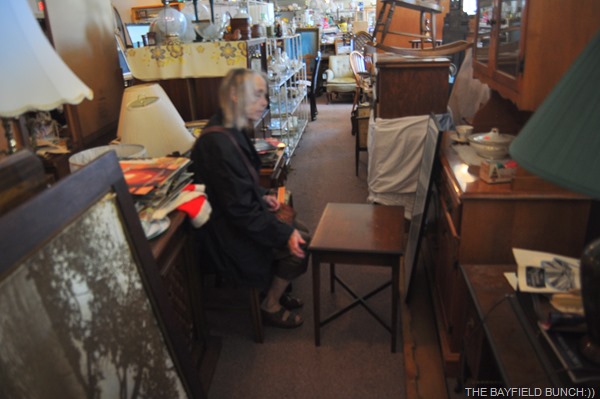 NO THAT IS NOT A GHOST IT’S JUST KELLY CHECKING OUT A SMALL TABLE ON THE LARGE BARN’S 2ND FLOOR
We did see a few tables for the rig but they were not in our price range.  However we did pick up a home made coffee mug I liked, an owl figurine Kelly liked, & a small orange/red vase.  It's a cash only place & not being used to carrying a lot of cash anymore we had quite a time coming up with the $14.87 plus tax but Kelly dug into her purse & came up with a paper Canadian one dollar bill as well as a two dollar bill & a Toronto subway token.  I contributed a toonie, Kelly found a five dollar bill & another toonie.  We somehow scrapped together $13 & the nice lady/owner of the Lakeside Flea Market must have taken pity on us poor folks & let us off with $13:))  Of course I was too embarrassed to be a part of the negotiations so exited the building & took Pheebs for a walk around the Flea Market property.  We were back home about half an hour later. 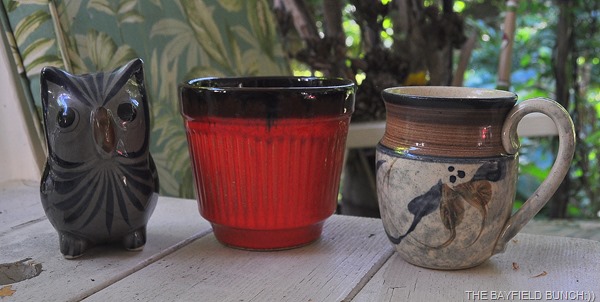 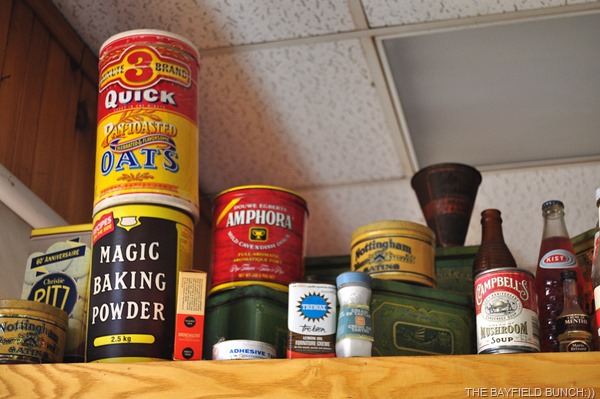 BE SURE TO CHECK OUT THEIR WEBSITE & READ DESCRIPTION FROM OWNER: 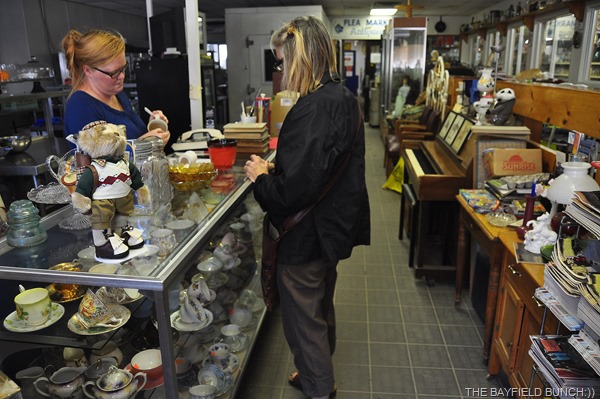 THAT’S KELLY NEGOTIATING WITH A TORONTO SUBWAY TOKEN SHE FOUND IN HER PURSE
Open the album then double click the first photo.  Screen appears with photo enlarged against a black background.  Click on any photo to enlarge it & move from photo to photo using the white arrows on the left or ride side of each picture.  For a slideshow move your mouse around a bit & look to the top left corner to where it says ‘Play slide show’. 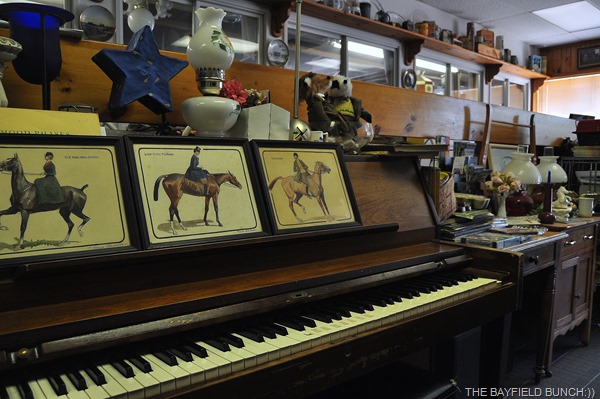 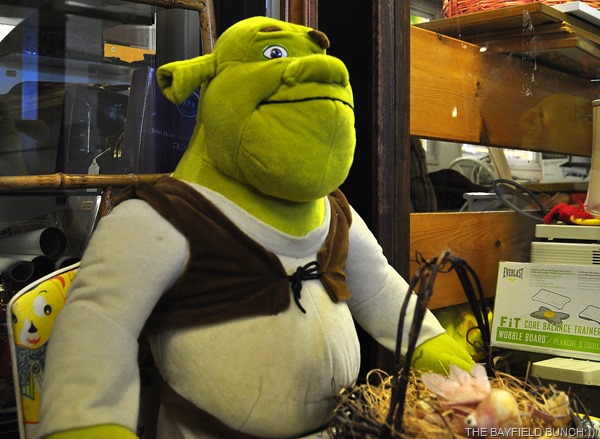 Somehow the exposure setting on my Nikon D90 shifted itself 'again' causing my camera to underexpose today's photos.  This results in photos being too dark & the photos I took inside the Lakeside barn were very dark but with the help of Picasa's easy to use free photo editing program I was able to lighten & include them in a Live Writer album anyway.  Look closely at these photos & see if you see any ghosts.  I didn't see any today but I did feel their presence.........:)) 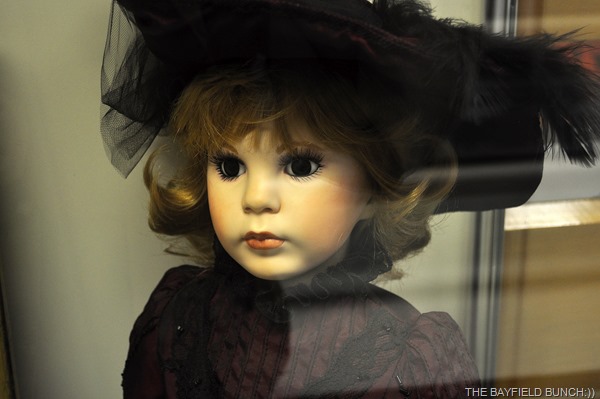 IF YOUR IN THE AREA BE SURE TO DROP IN & TAKE A STEP BACK IN TIME OR BETTER YET TAKE SOME OF THAT TIME HOME WITH YOU
Once home we were not long in trying out our Wingham Sales Arena table in the rig.  Seemed to fit perfectly so we were pleased with our find.  This will be a multi-purpose table.  One person can eat at it or use a laptop on it.  An Atlas can be easily be opened & looked at & while in my recliner I can set my cameras or coffee on the table as well as my coloring book & crayons.  For a chair we remembered we had a handy padded fold up card table chair in storage which years ago belonged to a card table set owned by my late Uncle Harry.  Fits perfectly with the table & can easily be stowed away or left standing while traveling.  Always nice to have things come together nicely when working on a project isn't it:)) 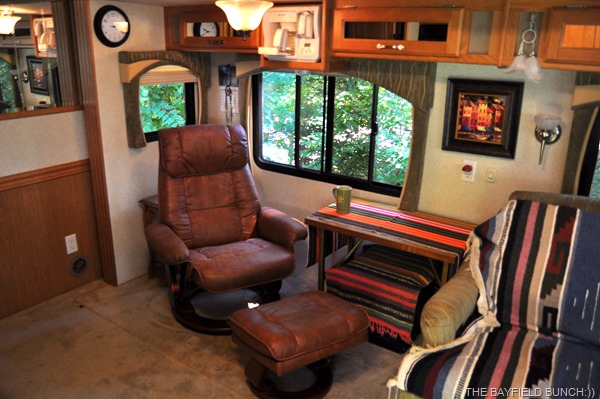 RECLINER, FOOTSTOOL, & TABLE ARE ALL ON THE SLIDE SO NOTHING HAS TO BE MOVED FOR TRAVELING…KELLY’S FOOTSTOOL STOWS AWAY UNDER THE TABLE 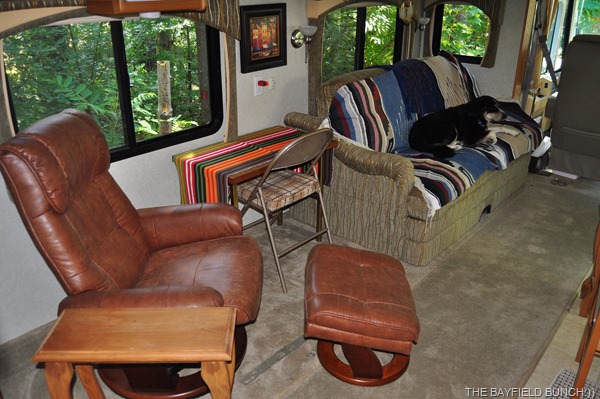 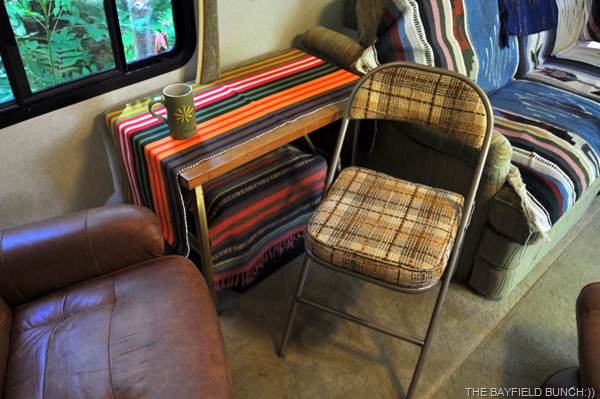 FOR A FOLD UP CHAIR THIS ONE IS ACTUALLY COMFORTABLE 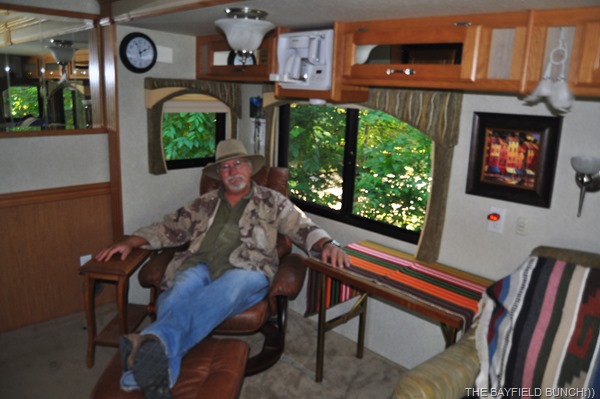 I MANUALLY FOCUSED THE CAMERA FOR THIS SHOT KELLY TOOK & THAT IS WHY IT IS OUT OF FOCUS:(( 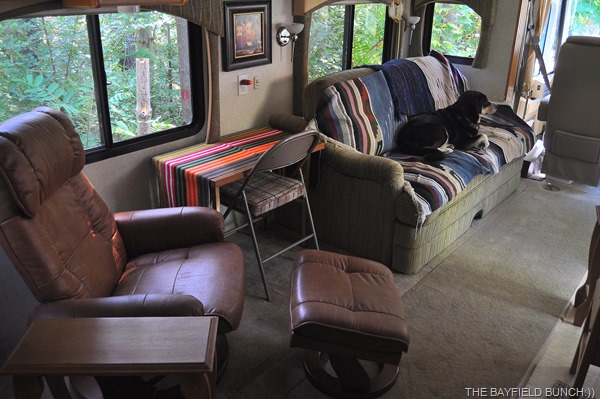 BOTH OUR HORTON RECLINERS ARE SWIVEL BASED AS WELL 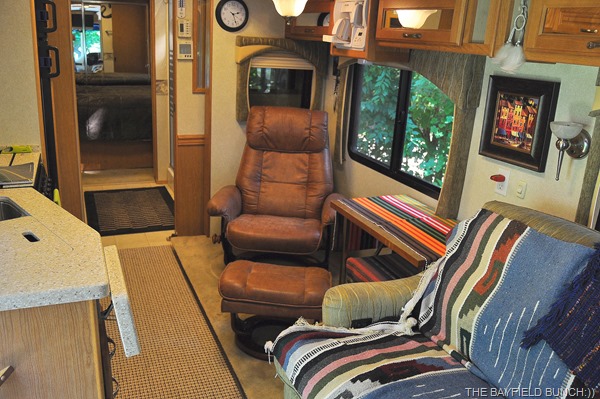 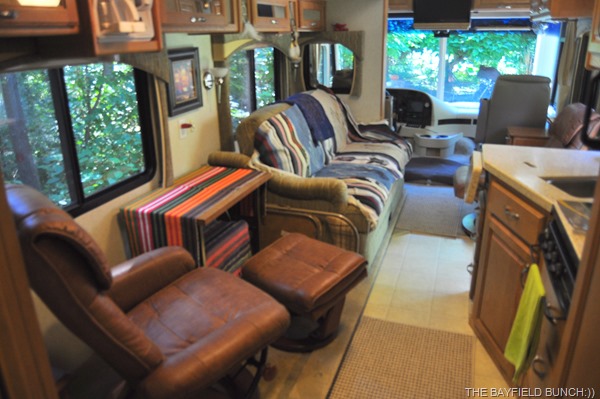 IF KELLY WAS DRIVING THIS WOULD BE A NICE PLACE FOR ME TO HAVE A SNOOZE:))
After publishing Sunday night's post I gassed up my 'Google Earth' plane & flew myself on down to Torrey Utah just west of CAPITAL REEF NATIONAL PARK.   Via Googles 'street view' I landed on main street in front of the General Store.  I was curious to see how big Torrey was & it looked like it didn't really get any bigger than what I was looking at up & down the street in front of the General Store.  Decided to fly over to Hanksville on the east side of the Park & see how big that little place was.  Well if I thought Torrey was small.......... Flew back over the Park & had a look from the air at a little place called Fruita.  No 'street view' landing strip there so just circled around the campground a few times to get an idea how big it was.  Low on fuel I finally headed on back to Canada & Bayfield Ontario.  At least I’m getting the lay of the land a bit & thanks to reader’s for your first hand comments about the area & the weather etc.  Much appreciated. 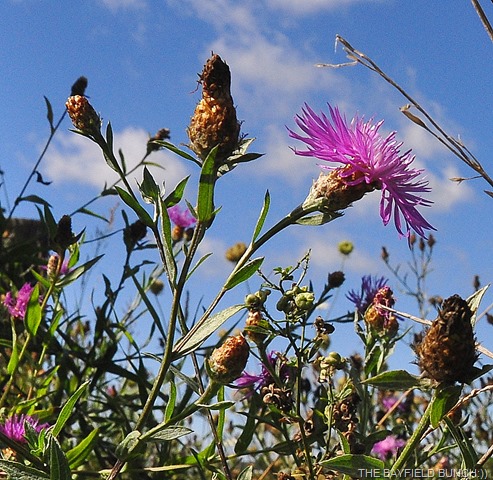 Despite some weather concerns with our late October early November Plan B travel plans I'm going to stick with that route I talked about in Sunday night’s post for now & we'll monitor the weather closely.  If the weather is looking sketchy ahead of us by Lincoln Nebraska we can just swing south & pick up Plan C.  Really really would like to spend some time in Utah’s Capital Reef National Park though.  If all goes according to plan we will be leaving 8 weeks from today.  Yes I know my travel plans are early……but I got the bug:)) 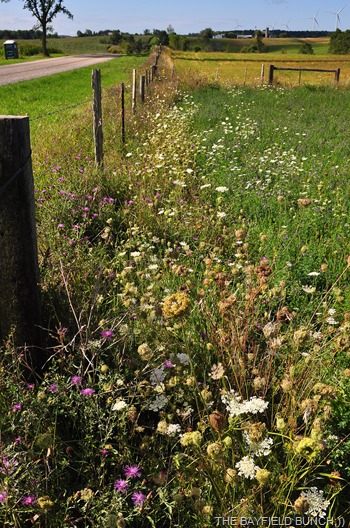