A PHOTO LOOK BACK AT LONE PINE CALIFORNIA, THE ALABAMA HILLS, & THE SIERRA NEVADA MOUNTAINS 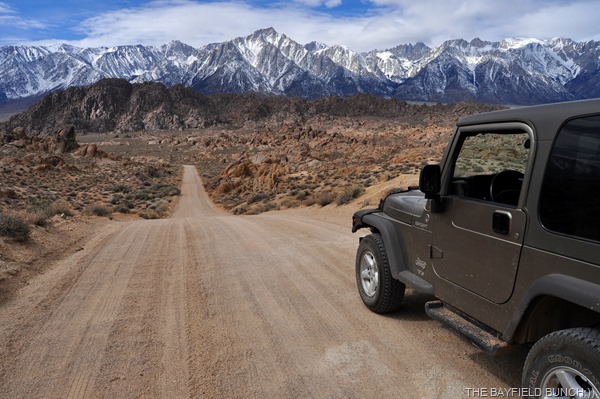 SHORT OF CURRENT PHOTOS AGAIN TONIGHT I’VE HAD TO DIG INTO MY FILES….MARCH 2011 WE WERE CAMPED IN THE ALABAMA HILLS JUST WEST OF LONE PINE CALIFORNIA  & THOSE ARE THE SIERRA NEVADA MOUNTAINS IN THE BACKGROUND 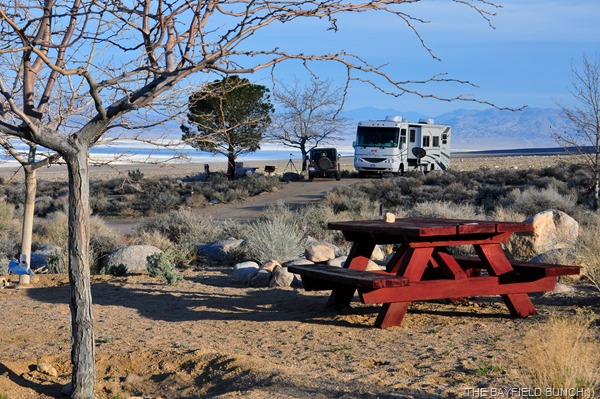 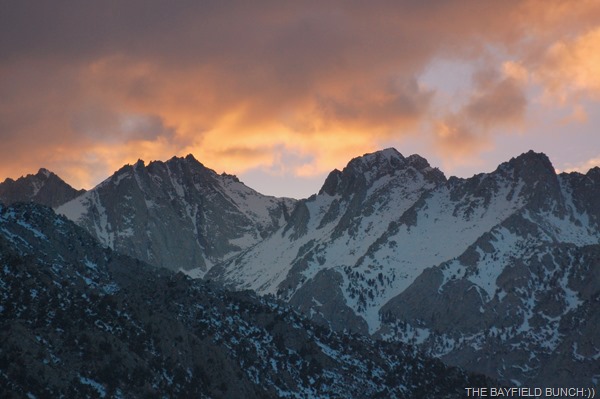 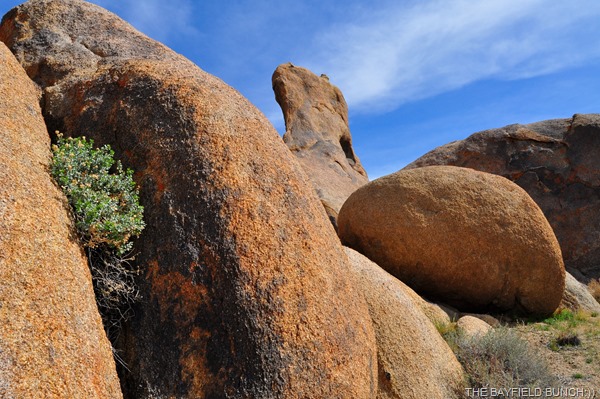 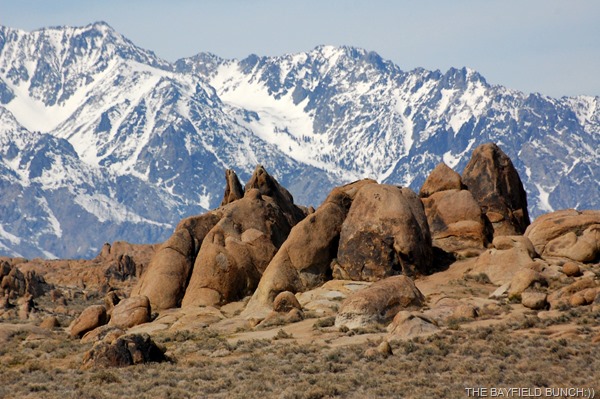 THESE ROCK FORMATIONS ARE SO TYPICAL OF THE ALABAMA HILLS 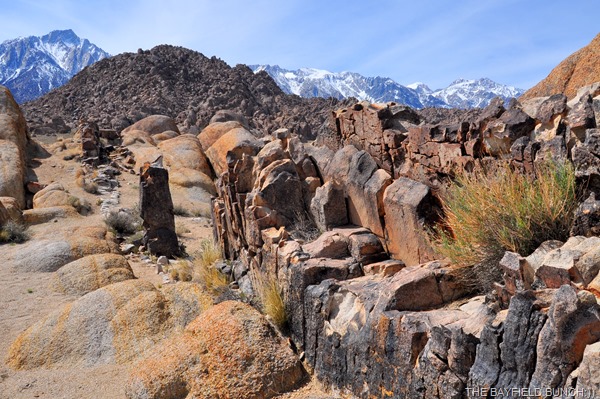 Today being the second Thursday since our last mobile coffee morning two weeks ago my good friend Richard & I were again on the road for a talk filled 2 hour cruise around our local rural roads.  Richard's turn to drive & we spent the majority of that two hours on wet pavement between intermittent rain showers.  Two hours very well spent again & I do look forward to our next coffee break in a couple weeks:)) 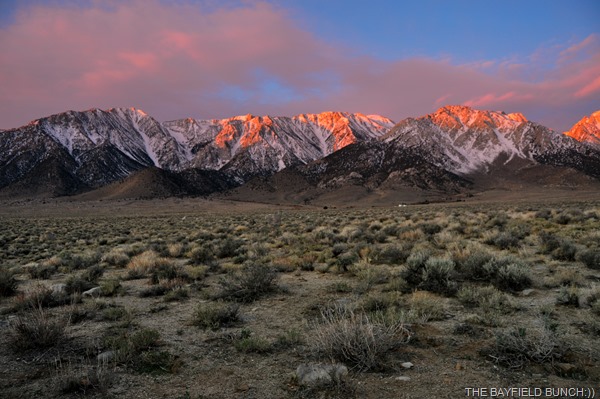 SUNRISE TICKLES THE TOPS OF THE SIERRA NEVADA MOUNTAINS 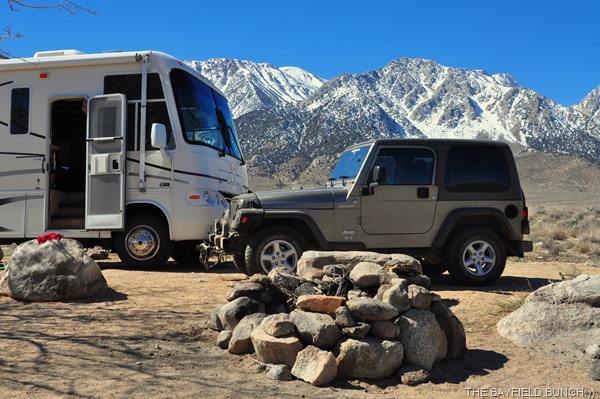 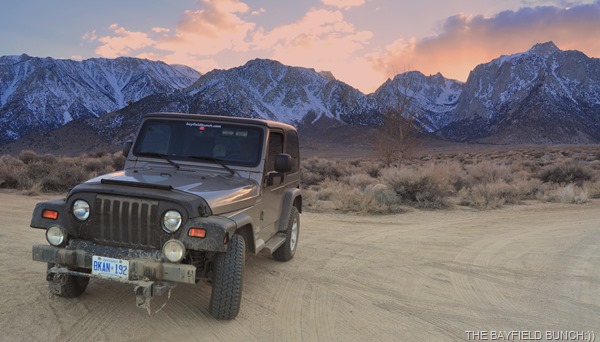 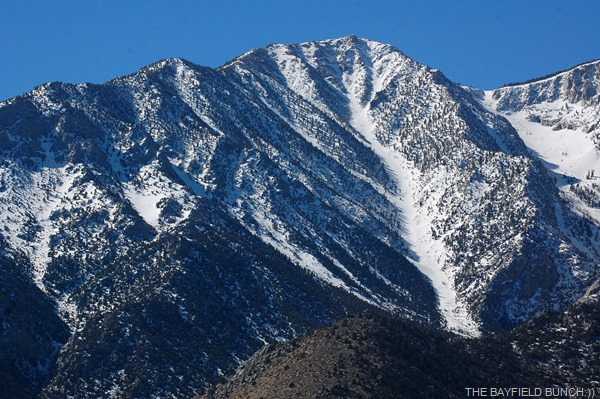 One of the nice things about living where we do here in South-Western Ontario next to some of the largest fresh water lakes in the world is our often changing & sometimes unpredictable weather.  Endless sunny days with same-same temperatures can get a little boring after awhile & the best way to appreciate those sunny days is to break them up with a few overcast rainy days thrown in for good measure.  We have been under cloudy skies & rain for 4 days now & what a lift to one's spirits to see an occasional shaft of sunlight pierce those gray clouds from time to time today.  Knowing we will be in for sunny skies again shortly it just gives one such a good feeling inside with something to look forward to & appreciate.  I think we have just the right combination of sun, cloud, & rain & if it wasn't for summer's miserable humidity we'd have what I would call just about the most perfect climate & weather region one could ever hope for.  Looking forward to a promised sunny Friday.  Pheebs & I will be out the door so fast in the morning…………:)) 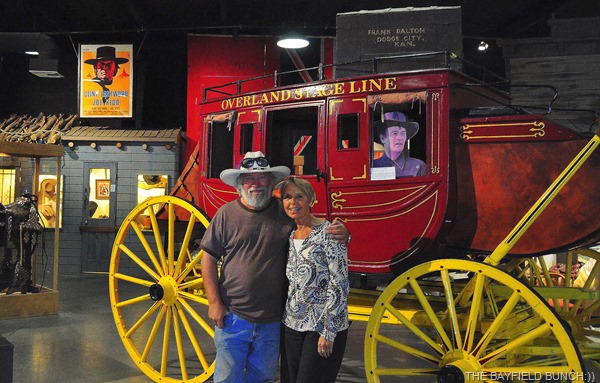 DOWNTOWN LONE PINE AT THE MUSEUM OF WESTERN FILM HISTORY 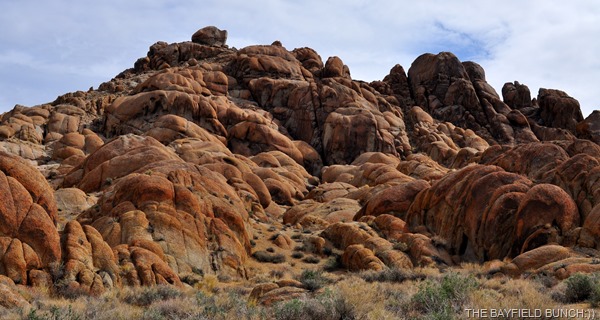 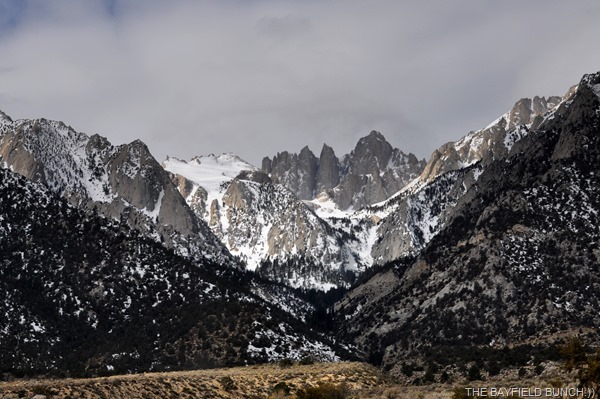 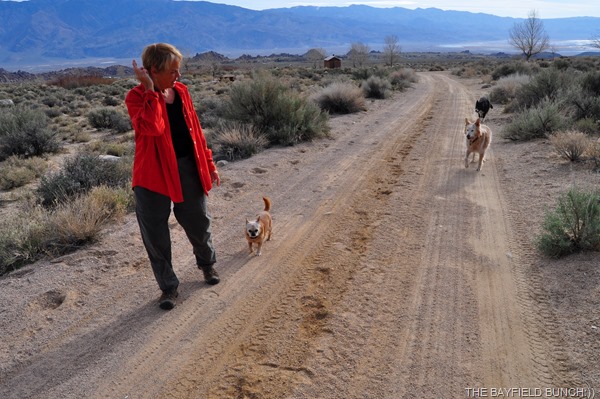 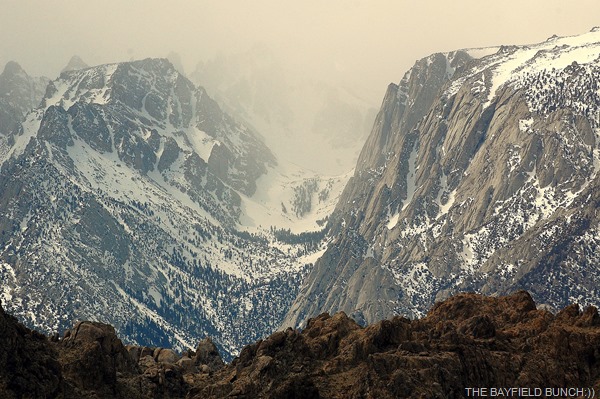 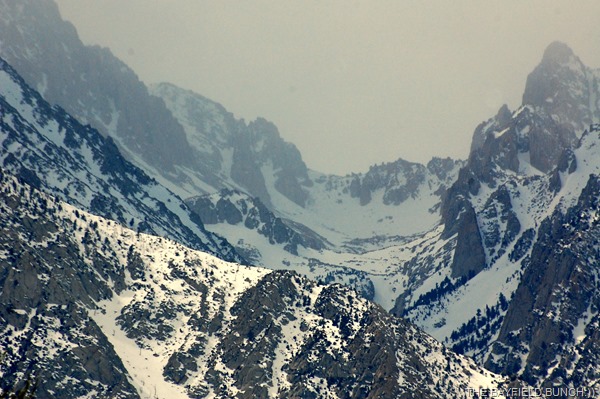 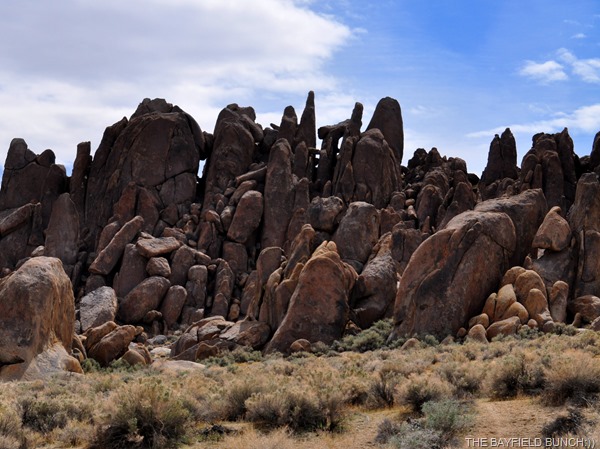 WHAT A GREAT PLACE FOR ROCK SCRAMBLING

Here's a paragraph I wrote a year ago about this time which still holds true for me today........" Sure is depressing watching or reading worldly news every day & I wonder why it is I am drawn to it.  A habit developed over the years I suppose, a curiosity, a feeling of wanting to be informed.  My news source is television.  I haven't read newspapers for years & reading or watching news on my computer holds no interest for me.  It's just too comfortable for me to flip back in my recliner & habitually snap on the news channels.  Too many times I come away angry at what I see going on the world.  It leaves me at times with a hopeless feeling about the future of the human race.  I suppose the easy solution is to not watch the news but Is ignorance truly bliss because if it is I have certainly not found it to be so.  Well not yet anyway but I’m working on it". 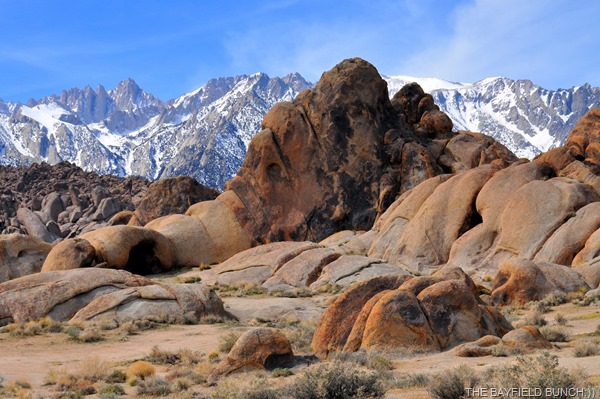 FOR ANY OF YOU UNDECIDED WANNABE RV’ERS I SUGGEST YOU GET IT TOGETHER, GET YOURSELVES ON THE ROAD, & HEAD FOR THE GREAT AMERICAN SOUTHWEST BECAUSE THERE’S A WHOLE LOTTA BEAUTIFUL COUNTRY GOING ON OUT THERE 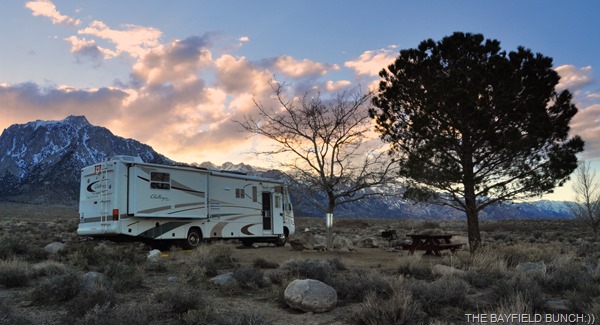 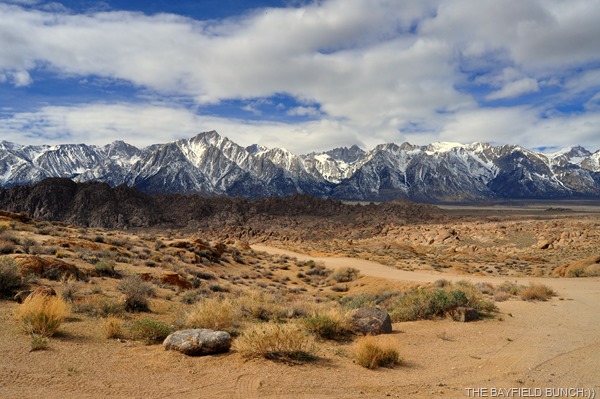 IF YOU’VE NEVER BEEN TO LONE PINE….PUT IT ON YOUR BUCKET LIST

Been noticing our shorter daylight hours & here we are less than a week from September already.  Hoping to get out soon & try some more night photos.  Well just hoping to get out & get some more photos period.  These past few rain soaked days have seen my cameras sitting on the desk collecting dust.  Well, due to inactivity I have been collecting a bit of dust myself………………… 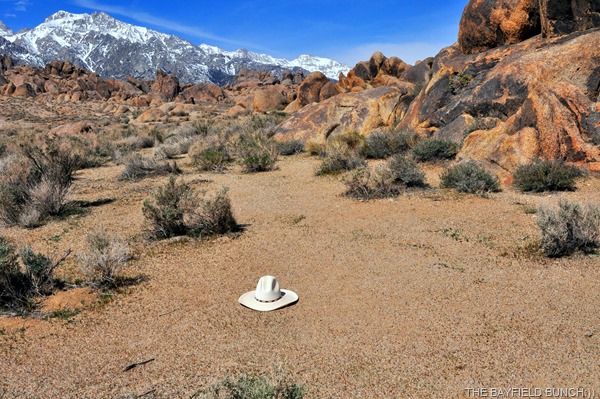 Sifting through my dusty old photo files tonight looking for a few pics I came across our stay in LONE PINE California back in March 2011.  One of the most interesting & fun boon docking days I’ve had was the day I went looking for old western movie locations in the Alabama Hills just west of the town of Lone Pine.  Here is the post I wrote that day……….IN SEARCH OF RANDOLPH SCOTT'S CAMPFIRE.....54 YEARS LATER.  Lone Pine was host to many, many, old western movies back in the day.  Roy Rogers, Hopalong Cassidy, Gene Autry, John Wayne, Tom Mix, Errol Flynn, Gregory Peck, Bing Crosby, Gary Cooper, Cary Grant were just a few of the great names who filmed here in these oh so picturesque Alabama Hills. 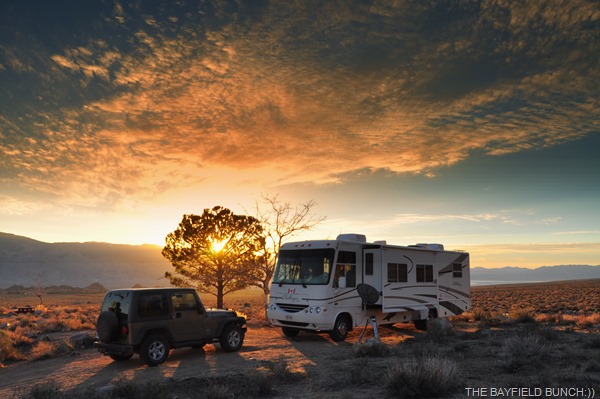