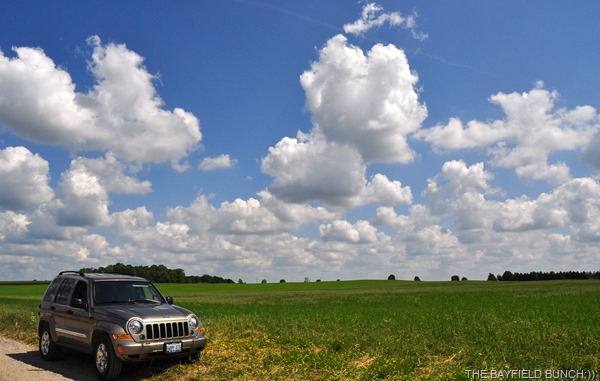 Spent the morning in my recliner watching TV just taking things slow & being careful not to do anything that might trigger any dizziness because it is that dizziness which brings on those sickening waves of nausea.  By early afternoon I wasn't feeling quite as queasy so ventured outside for a walk around & that went fine.  Being careful not to lower my head below my waist I slowly bent over a bit & picked up a couple things on the ground & that too worked out Okay.  Figured I'd try my luck at putting some decals on the Big EEE as well as the Jeep.  Took it slow & managed to complete that project without any problems except I put some of the decals on a bit crooked.  I'll blame that on my balance being off a touch.  Had I tried that project 2 mornings ago I probably would have put the decals on sideways & upside down. 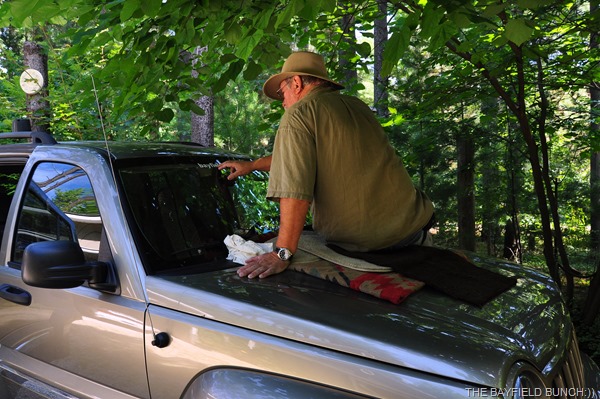 Main reason I like to have these identifying decals on the Jeep Liberty (had them on the Wrangler too) is that it gives me some measure of credibility when I am out in the country with my cameras driving along slow on back country roads.  Like pretty well most places one goes these days there are bad people out & about on these very same roads.  Illegal & hidden grow-ops in farmers fields, druggie meth labs, guys stealing farm equipment & sometimes cattle.  A slow moving or stopped vehicle on a country road is always viewed with suspicion by the farming community & I understand that.  If a farmer stops or comes running down his farm lane after me or if police are called about a suspicious vehicle I at least basically have ‘who I am’ on my vehicle.  Bad guys don’t put anything on their vehicles identifying themselves.  I have never had any problems with anyone over the years but there’s always a first time & if all of a sudden police cars come flying up behind me with lights flashing I’m hoping my bayfieldbunch decals will at least help ease their minds right off the bat that I am not a druggie, a marijuana grow-op guy or somebody out looking to steal half a dozen chickens or a couple ATV’s.  Well, that’s my theory anyway……………………….. 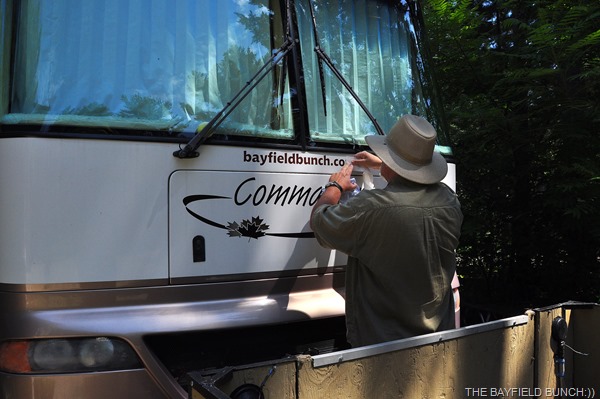 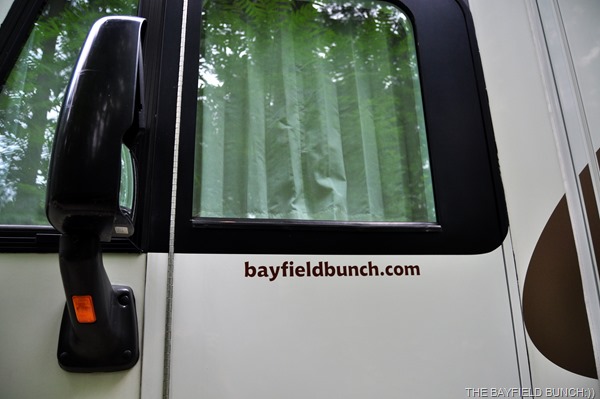 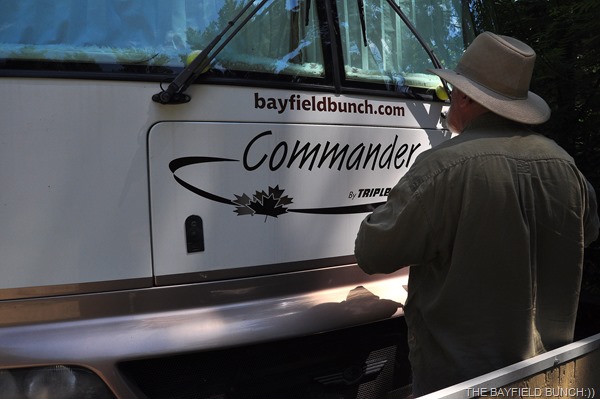 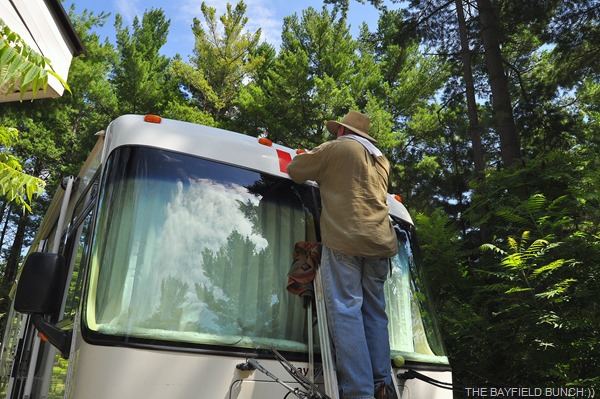 CANADIAN FLAG DECAL ON THE FRONT 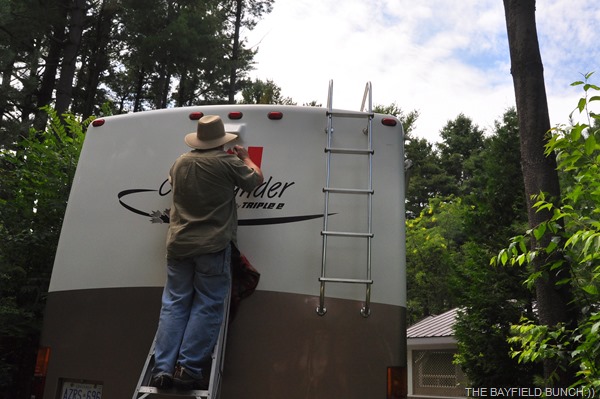 CANADIAN FLAG DECAL ON THE BACK 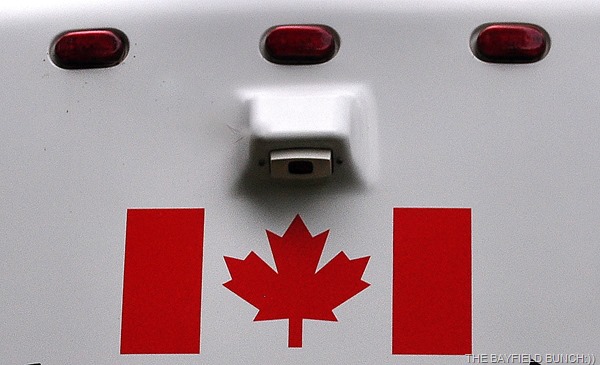 REASON FOR CANADIAN FLAGS ON THE RIG IS SELF EXPLANATORY…WE LOVE YA CANADA PLUS I’VE ALWAYS FELT IT’S A QUICK ID FOR THE BORDER PATROL IN THE SOUTH-WESTERN STATES CLOSE TO THE MEXICAN BORDER WHENEVER WE ARE DOWN THAT WAY:))

Thanks to everyone for their helpful advice, suggestions, & links regarding my possible case of Vertigo.  Kelly has gone through those links today reading each one & we both now feel better informed about what could be going on & what to do about it. 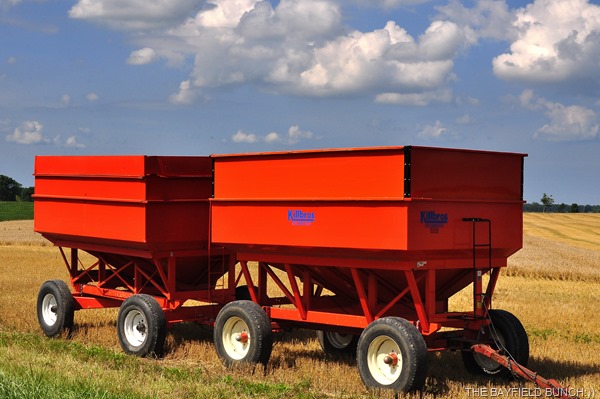 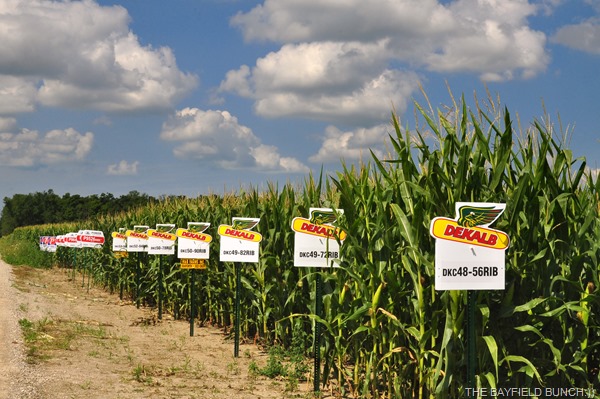 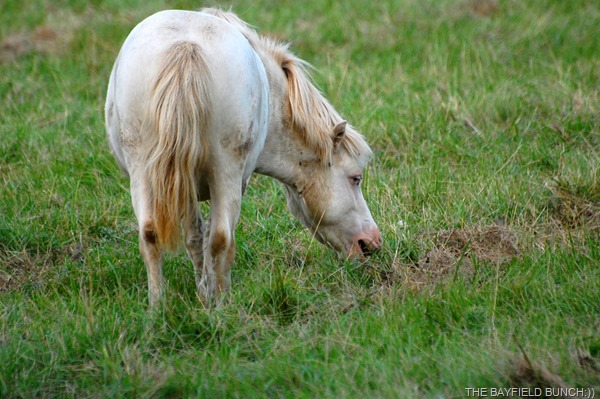 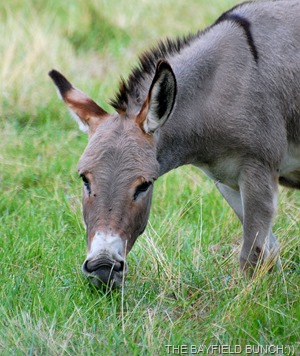 I've had my eye on our cloudy sky all day hoping it will clear before nightfall.  Members of the Royal Astronomical Society of London are offering a great star gazing opportunity with telescopes at Bayfield's Pioneer Park tonight.  That is if the cloudy sky clears up.  Their theme is '25 Years of the Hubble' telescope.  I plan to attend………….weather permitting.

SCORED MYSELF A FEW MORE BARNS FRIDAY MORNING AS WELL 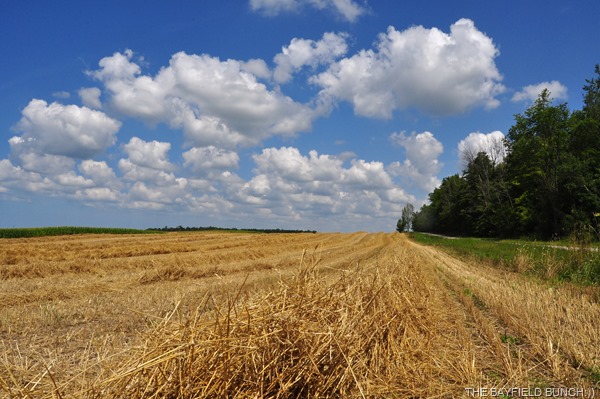 AFTER THE WHEAT IS HARVESTED THE STUBBLE IS RAKED UP INTO LONG ROWS BY A MACHINE…..THAT ROAD TO THE RIGHT LEADS TO OUR NIGHT PHOTOGRAPHY SPOT 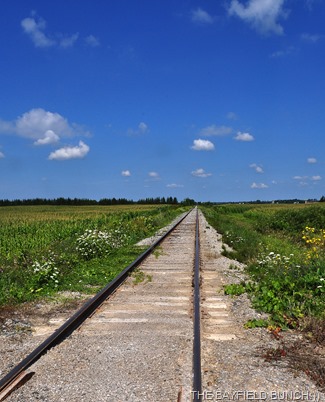 Most folks our age will for sure remember the old TV western, 'Gunsmoke'.  There was kind of a rough & tumble character on there by the name of Festus who was played by actor Ken Curtis.  I didn't know this but Ken Curtis was actually a member of one of my all time favorite harmonizing song groups, 'Sons Of The Pioneers'.  Came across this You Tube on Facebook today of Ken Curtis singing the well known western tune, 'Tumbleweeds'.  After listening to this I went right away to my CD collection & dusted off my Son's Of The Pioneers' disc.  I never tire of these fellers & their great harmonizing:))  Thank you Susie Fasig Smeal for the link to this:)) 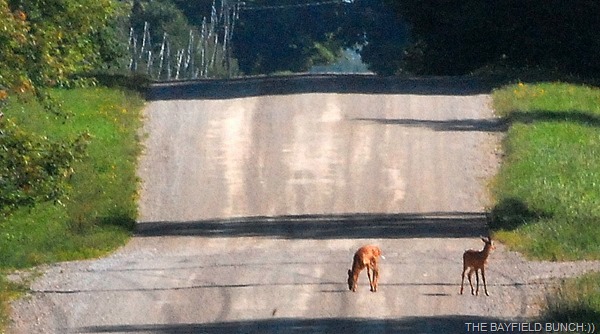 And a surprise in the mail a couple days in the form of a $95 cheque from Camping World regarding our stop at their Williams Arizona facility this past March.  Readers may remember the annoying & perplexing problem we were having with our rigs refrigerator at the time.  Stopping at Camping World we had them do a service on our fridge with special attention paid to the problem we told them about.  They did not find anything wrong with our fridge.  A month ago we took our rig to Gammons RV Parts & Service in St. Thomas Ontario & he quickly found the problem to be a piece of insulation blocking the exhaust vent & he simply found that problem by climbing atop our rig, removing the vent cover & with a flashlight peering down the vent pipe.  Camping World personnel obviously did not do that.   Kelly sent Camping World a letter a week after Gammons solved the problem & also included a photocopy of Gammons bill stating what the problem had been.  Two thumbs up for Camping World in reimbursing us the cost of the Williams refrigerator service on our fridge.  Isn't it nice to win one for a change.  Reminds me of the time when I made a mistake about what kind of a new toilet to be installed in our Damon Challenger & Lazydays plus Camping World in Tucson teamed together & corrected my mistake with another new toilet & didn't charge us for the exchange.  That was a big two thumbs up for Lazy Days & Camping World that day:))   Anyone interested in that little toilet fiasco back in December of 2011 can read about it here…..Oh No Al Makes A Big Toilet Decision Mistake & We Have Been De-Throned. 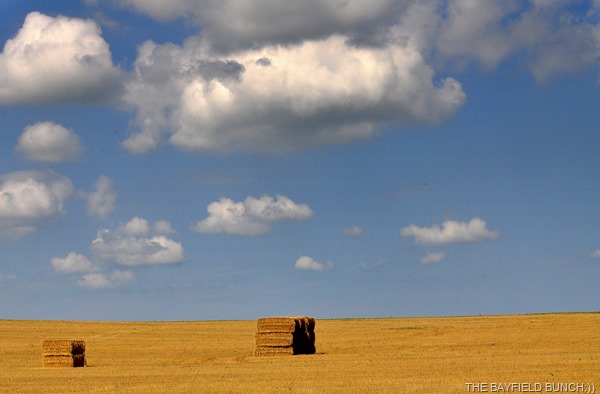 GROANER’S CORNER:(( Well, a Girl Potato and Boy Potato had eyes for each other, and finally they got married, and had a little Sweet Potato, which they called 'Yam.'  Of course, they wanted the best for Yam.

When it was time, they told her about the Facts Of life.  They warned her about going out and getting Half-Baked, so she wouldn't get accidentally Mashed, and get a bad name for herself like 'Hot Potato,' and end up with a bunch of Tater Tots.

Yam said not to worry, no Spud would get her into the sack and make a Rotten Potato out of her!  But on the other hand she wouldn't stay home and become a Couch Potato either.  She would get plenty of exercise so as not to be skinny like her Shoestring cousins.

When she went off to Europe, Mr. And Mrs. Potato told Yam to watch out for the Hard-Boiled guys from Ireland and the greasy guys from France called the French Fries.

When she went out West she was to watch out for the Indians so she wouldn't get Scalloped...  Yam said she would stay on the straight and narrow and wouldn't associate with those high class Yukon Golds, or the ones from the other side of the tracks who advertise their trade on all the trucks that say, 'Frito Lay.'