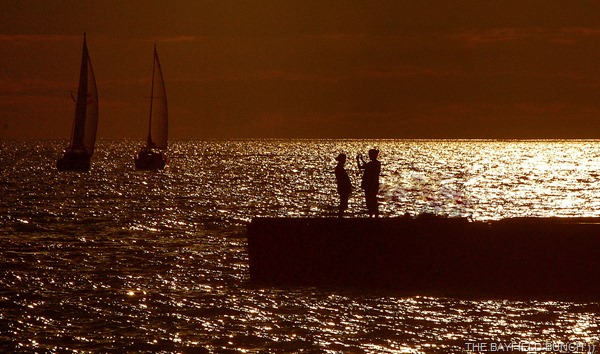 At 5:58 this morning we rolled out our driveway & 67 minutes later we were walking through the front doors of London's University Hospital.  On the way we were able to see a nice sunrise & I was reminded it was the first sunrise we have seen since traveling home nearly 4 months ago.  Traffic was light & we actually found a spot in the usually overcrowded parking garage first time around.   That is always a huge bonus for an impatient person like myself. 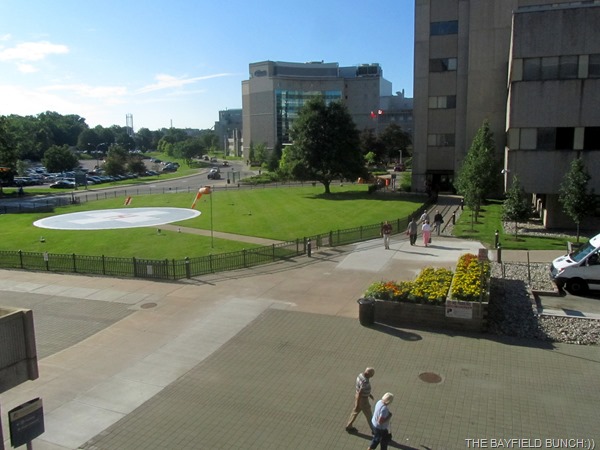 TAKEN FROM THE PARKING GARAGE & WE WALKED TO THE MAIN ENTRANCE JUST TO THE RIGHT OF THAT SINGLE TREE…EMERGENCY HELICOPTER PAD ON LEFT
One of three hospital elevators took us to the basement & we found Kelly's destination.  She checked in & soon disappeared through a door & I was told to return around 9. 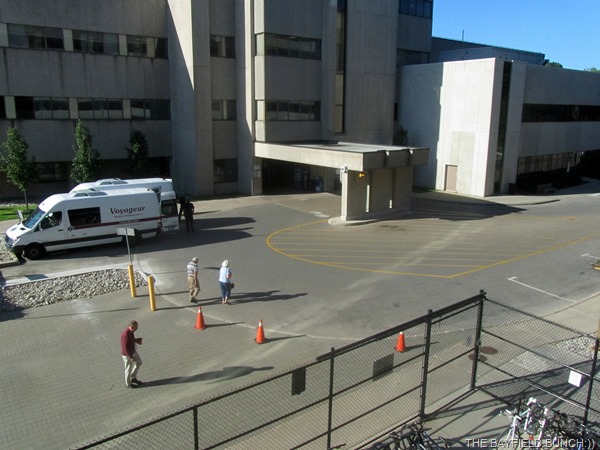 A FEW YEARS BACK DRIVING A MOBILITY VAN THIS IS THE ENTRANCE WHERE I WOULD PARK WHEN TRANSPORTING PEOPLE TO & FROM UNIVERSITY HOSPITAL
Took a flight of stairs up one level to the ground floor &  made my way to the lobby & Tim Hortons.  A line-up of course but 10 minutes later I was settled in a single chair near the main entrance eating a carrot muffin & drinking a coffee.  Seemed odd to be eating the whole muffin all by myself without sharing it with a little doggy I know sitting intently watching me in the passenger seat of the Jeep. 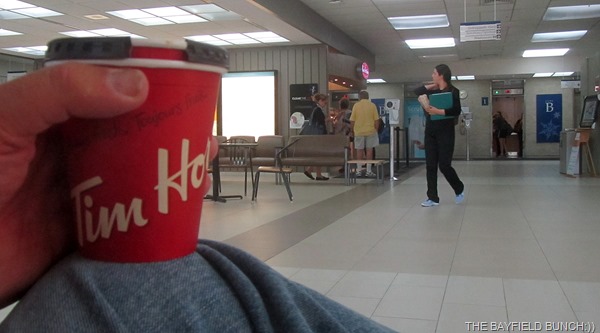 TIM HORTONS LEFT OF CENTER & STRAIGHT AHEAD I SEE ONE OF THE 3 ELEVATOR DOORS OPEN
Could see we had a nice warm sunny morning going on so moved myself, my coffee, & my already eaten muffin outside.  Found an iron bench directly in front of the hospital that was as uncomfortable to sit on as it looked.  Took a few pics of the hospital & a selfie.  By the time my coffee was finished temperatures were rising so headed back to the parking garage & dropped off my jacket.  Time was moving right along so headed back to the waiting room where I left Kelly earlier & spent an hour reading 'The Murrow Boys' on my Kindle.  At 10 o'clock Kelly walked through a door into the waiting room just a wee bit on the shaky side. 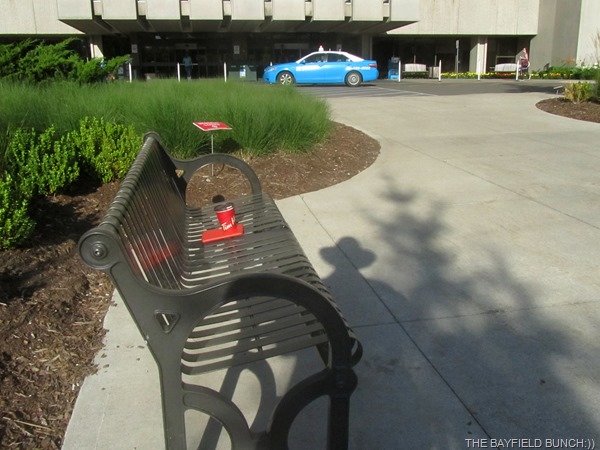 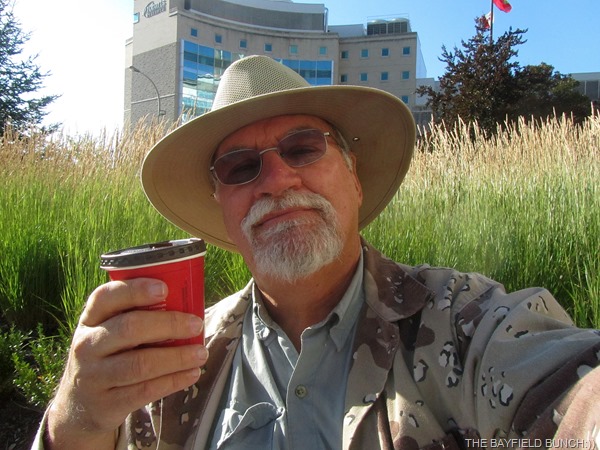 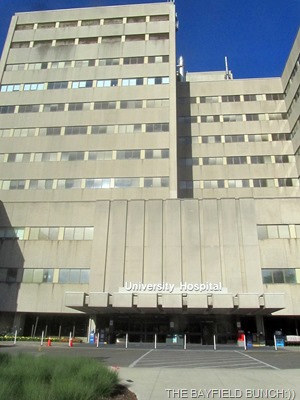 <<< FRONT ENTRANCE TO LONDON’S UNIVERSITY HOSPITAL
It was Kelly's first colonoscopy & she came through it with flying colors.  Said there was absolutely no pain or discomfort except for a couple mild sensations when a few snips were taken here & there for biopsy purposes.  Said she was able to watch the whole procedure on a monitor.  She was given a mild sedative & said she did feel a little out of touch for awhile.  It was her own specialist Dr. Levstik who did the procedure & thanks to his very personable personality everything went off without a hitch.  Having not eaten anything substantial the past 24 hours Kelly felt like stopping at McDonalds & that is what we did.

WELL SHE SURE DON’T LOOK NO WORSE FOR WARE DO SHE
Another beautifully cool refreshing morning as we headed home to Bayfield.  Rural south-western countryside on the way & for me it was another hour well spent enjoying the scenery all the way home.  An ecstatic little doggy waiting at the door for us.  Kelly, not feeling well headed in for a rest while I loaded up Pheebs & off to Goderich we went.  Home Hardware had phoned Tuesday saying my 70 piece wrench/ratchet tool set had arrived so along with a few other things to pick up we had ourselves a nice little drive to Goderich & back.  Along the way I stopped to take photos of  some large impressive John Deere farm implements sitting in a wheat field by the road. 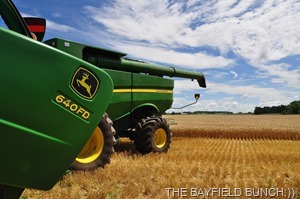 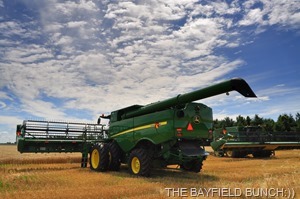 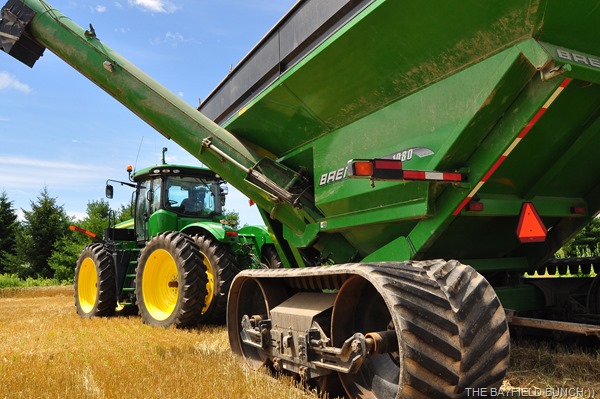 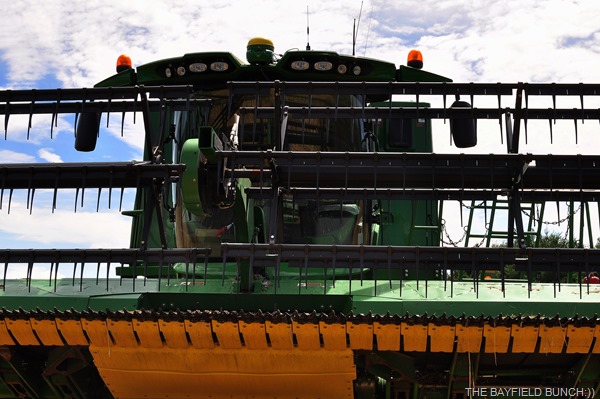 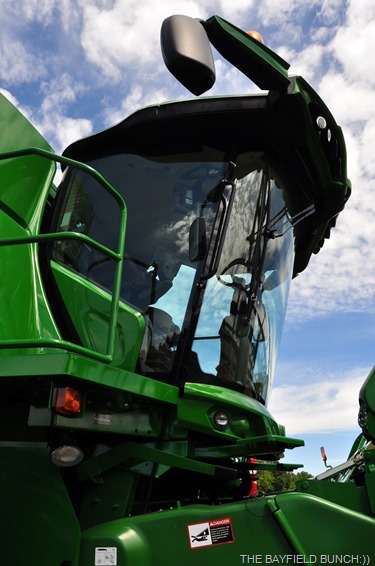 Some might ask why a mechanically challenged fella like myself would ever buy a 70 piece wrench & ratchet set.  Well good question & one which I myself have asked I myself.  It’s one of those questions which actually has several answers.  When I went to put my new motorcycle mirrors on a couple weeks ago I couldn’t even find a wrench to tighten them up.  Had an adjustable wrench but it was clumsy & I never did get the nuts tight until today with a proper wrench from my spanking new wrench set.  I do carry a very heavy tool box with us when we travel & it elongates my arm every time I try to pick it up.  Got everything in that tool box from nuts to soup.  If I have one screwdriver in there I must have 50.  My new wrench/ratchet set also carries one magnetic screw driver with an assortment of tips.  Also a set of Allen keys.  Must have a hundred & fifty of them Allen key thingys in that old 12 ton tool box.  My idea is to go through that big old tool box & pare it down eliminating all the doubled up tools & excessive weight for starters.  Now I know I’ll never use even a quarter of this stuff in the new tool container but at least I’ll have a few of the ‘right tools’ now just in case I need them.  Of course needing the tools & knowing how to use the tools are two different things but at least I have the first part of the sentence in place now.  Regular price on this Crescent set was $84.99.  Sale price was $44.97 so there ya go. 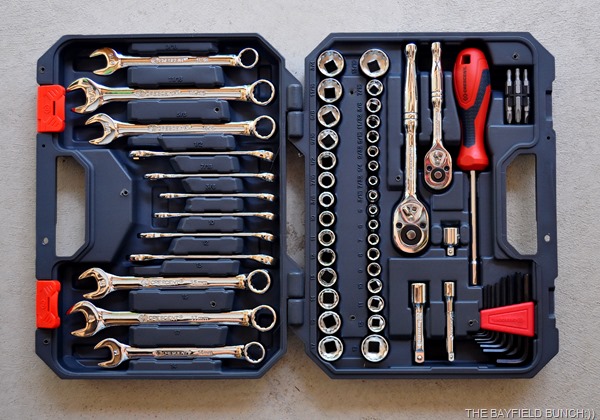 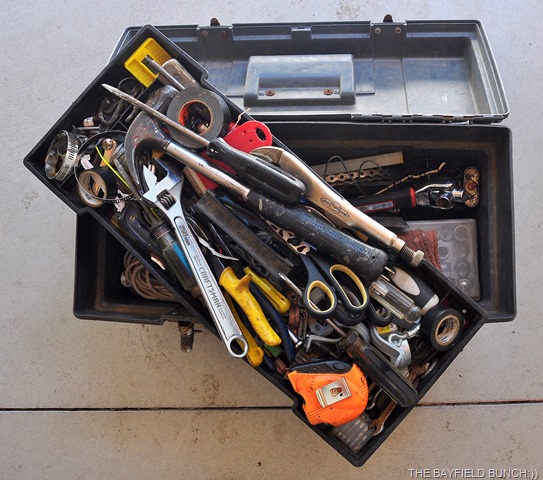 MY OLD 12 TON ARM STRETCHING BACK BENDING TOOL BOX
Kelly spent most of the afternoon resting & I kinda did the same.  She did experience some feelings of sickness from the sedative but by 3 she was up & rumbling around.  Our 5 a.m. start to the day had tuckered us out a wee bit & especially Kelly with her 8 a.m. hospital procedure.  Pheebs & I did get out for a walk around our forest trail later in the afternoon & that was only made possible by a brisk breeze & cooler temperatures holding ‘most’ of the miserable mosquitos down. 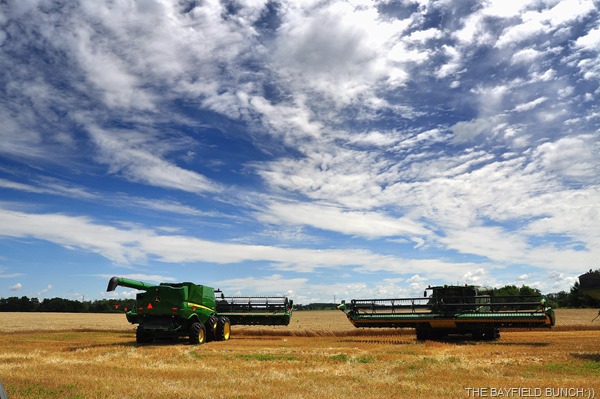 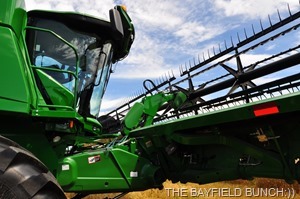 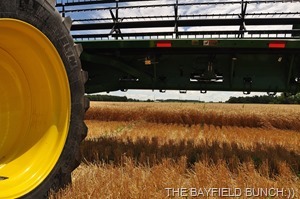 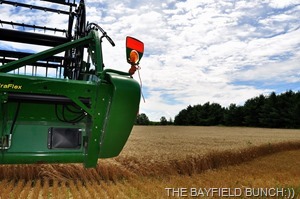 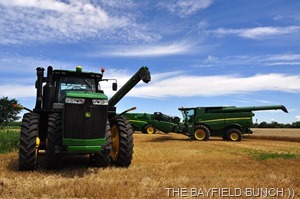 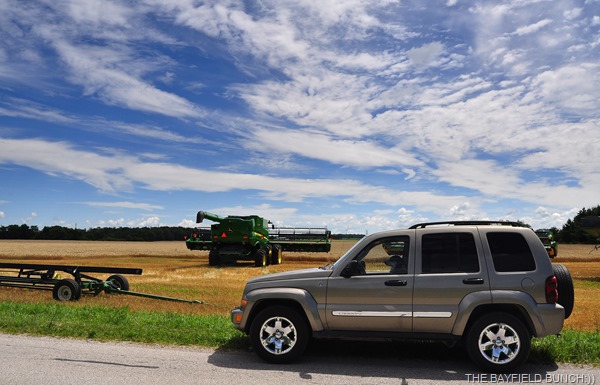 YEP THERE’S A DOGGY IN THE JEEP ALRIGHT:))

Tuesday night after publishing my post Pheebs & I again headed over to Bayfield's beach & Pioneer Park area to check out the sunset.  Did manage to get a few photos & we were home again shortly after 9.  Kinda looking forward to shorter days soon when sunsets & night sky's are upon us earlier.

I recommend viewing photos in the slideshow format.  Open the album then double click the first photo.  Screen appears with photo enlarged against a black background.  Move your mouse around a bit & look to the top left corner to where it says ‘Play slide show’.  Click on that & away you go:)) 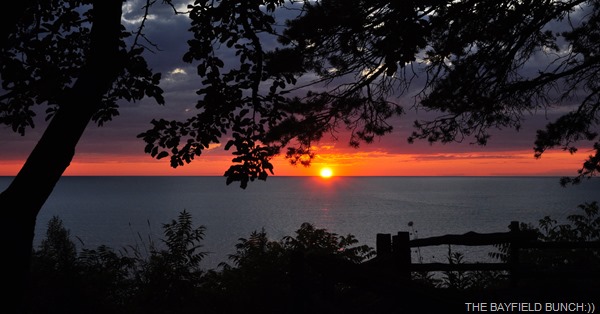 GROANER’S CORNER:(( I was horrified to find my son eating out of the sugar bowl.
"Don't let me catch you doing that again!" I scolded.  He was willing but dubious. "I'll try, Mommy," he told me, "but you're so quiet sometimes."

A fellow nurse at my hospital received a call from an anxious patient.
"I'm diabetic and I'm afraid I've had too much sugar today." the caller said.
"Are you light-headed?" my colleague asked.
"No," the caller answered, "I'm a brunette."