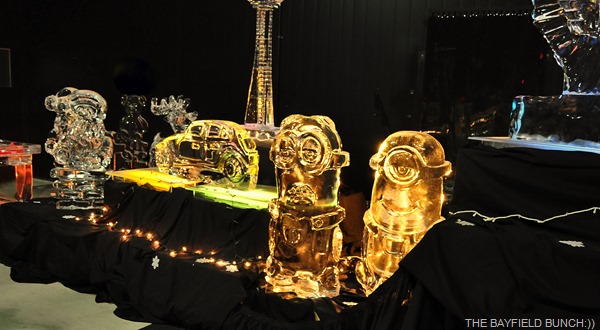 NO THESE ARE NOT MINIONS
A short 20 minute drive southeast of Bayfield Ontario is a small town by the name of Hensall.  The town can be noticed from a few miles away due to it’s 3 major farming Co-ops.  Tall metallic silos dominate the town’s skyline & Hensall is touted as the White Bean Capital of Canada.  The town’s name may ring a bell for some RV’ers if they happen to own a Citation RV made by General Coach.  This is where they are made.  In fact our very first RV a 1979 17’ Class C Dodge Centurion was built here as well as the 68’ mobile home we now live in.  But it wasn’t the huge Hensall Co-op complex or the RV manufacturer we were in Hensall this afternoon to see.  Where we were headed we needed our winter coats with temperatures plunging as low as –9C. (15.8F) 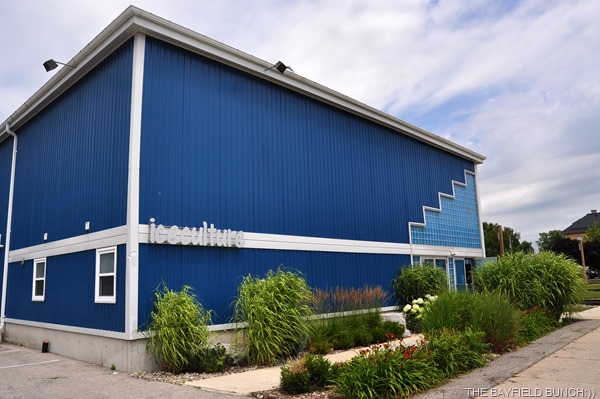 There was little on the outside of the long dark blue building we entered in downtown Hensall to tell us of the sculptured wonders inside except the 10 letter word on the building saying ICECULTURE.  Probably not as well known around the area as it is around the world.   Iceculture began 30 years ago as a hobby & today the company is one of the largest players of the hospitality ice industry on the Planet.  Company staff travel around the globe attending international events & elaborate gala functions.  In other words this company makes ice & turns that ice into wondrous works of art. 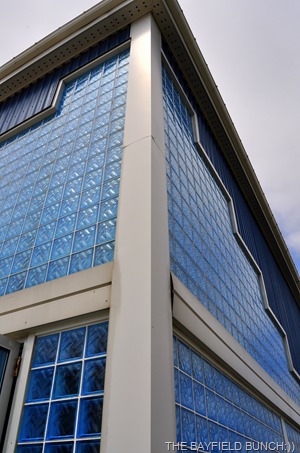 Our Iceculture tour led by a personable & knowledgeable young fellow began at 2 p.m.  I’m sure he told us his name but I missed it.  By the way there were 5 other people on the tour.  We went from Hensall’s outside Friday afternoon temperature of around 80F to 16F in a matter of seconds as we entered through a cool room into a large warehouse freezer.  Yes we needed our winter coats & this freezer was probably big enough to park three 18 wheelers in side by side.  Quickly through the large freezer room which we would return to later we exited through another door into a long assembly line type room where the ice for all the company’s numerous sculptures is made.  Rows of square & rectangular metal tubs for making blocks of ice.  We did get to see one tub with two large ice vodka bottle looking things inside being slowly frozen.  A long standing California liquor company had ordered them for an ice display function they will be presenting.  Icesculpture has been making ice products for this California company for about 10 years now.  Water was being swirled around forming these ice bottles & our guide fellow told us some of these ice blocks can take 2 & 3 days to properly freeze. 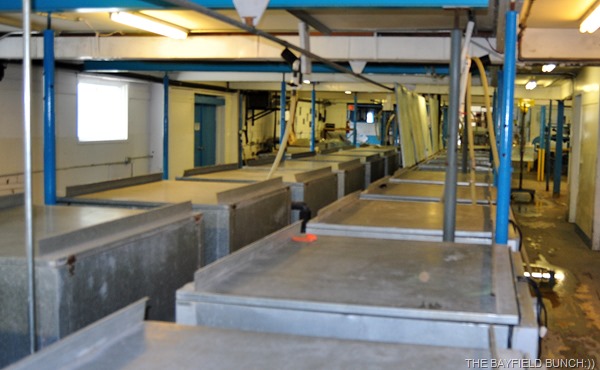 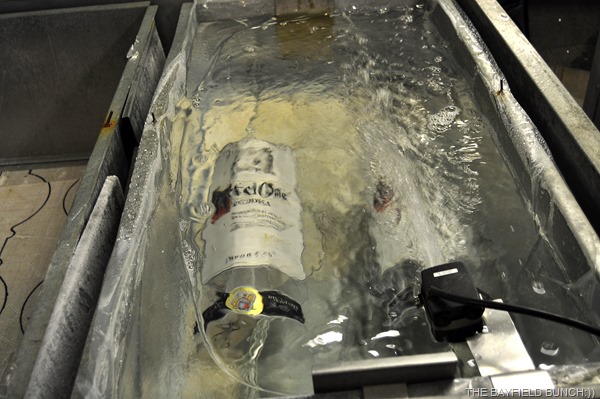 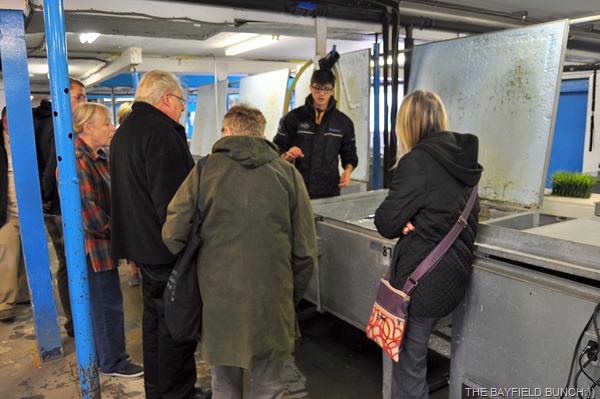 OUR GUIDE DID EXPLAIN HOW THE FREEZING PROCESS WORKS BUT OF COURSE I CAN’T REMEMBER ALL HE SAID
From the ice block room we were led to a smaller room with a large window overlooking something akin to a very cold winter’s day.  A young female staff member sat at a desk with shorts on & here we were in winter coats but just a few feet away on the other side of the glass window a lady in something akin to a snowmobile suit was busy with a snow shovel clearing the floor.  Another warmly dressed fellow with heavy winter gloves & ice shavings on his boots worked at a table with a small circular buffer type machine removing what looked like packed snow from inside perfectly formed ice drinking glasses.  Beside that worker a computerized cutting & sculpturing machine moved knowingly over a block of ice precisely cutting out ice glass after ice glass.  I think there were several computerized machines in that room. 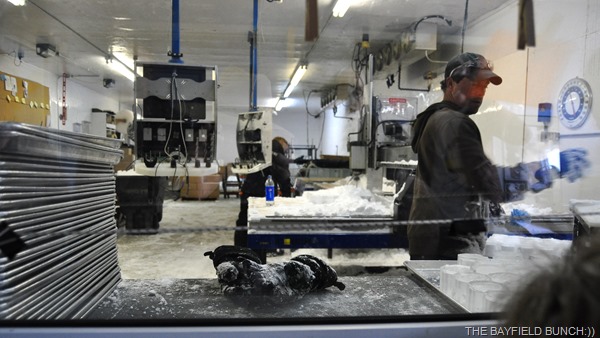 ICE GLASSES CAN BE SEEN ON TRAYS 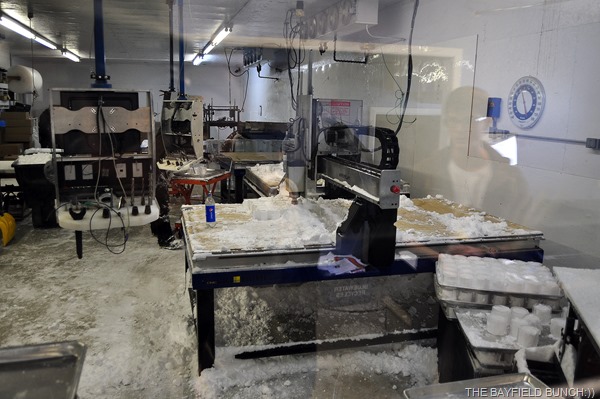 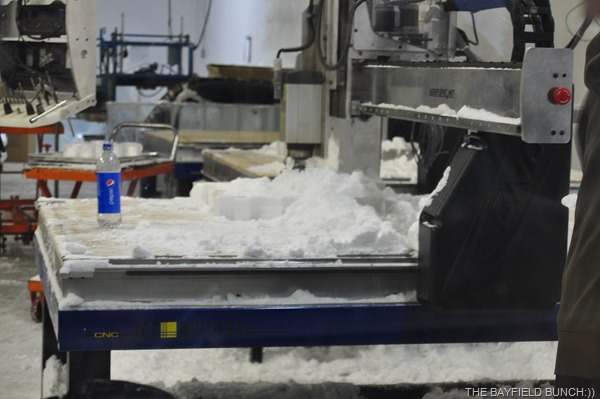 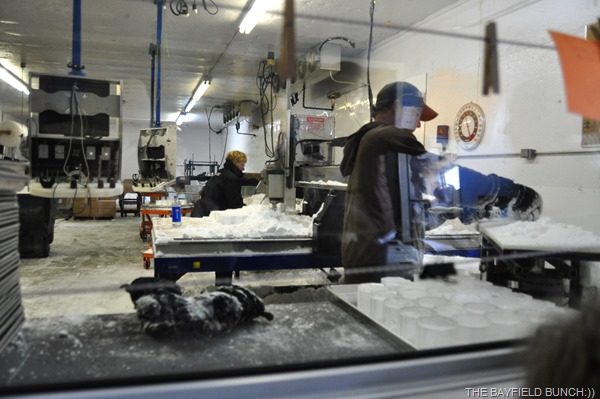 A PAIR OF COLD LOOKING WINTER GLOVES IN THE FOREGROUND 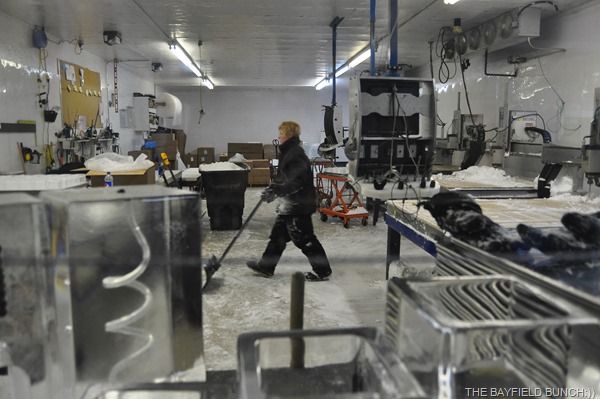 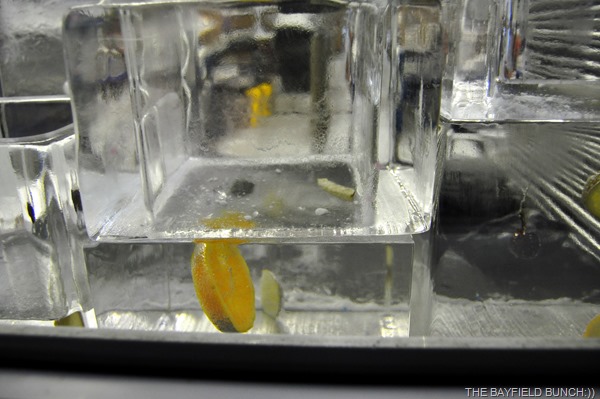 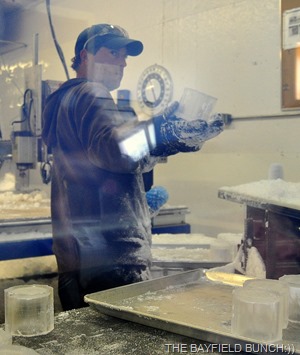 THIS FELLOW PASSED THAT ICE DRINKING GLASS THROUGH A DOOR FOR US TO LOOK AT…..THEY ALSO MAKE FANCIER WINE TYPE GLASSES AS WELL
From the ice glass making room we were back out into the block ice container room again this time looking at a metal vat of water slowly freezing to create a couple ice bowls.  These types of ice bowls are often used at wedding receptions for punch.  Just about anything can be added to the thick ice layer making up these bowels & our guide told us of one bowel they were contracted to make for a young lad’s bar mitzvah.  The frozen walls of the bowl were to contain diamonds so that is exactly how they made it.  I’m assuming the diamonds were shipped in from the lad’s very rich family. 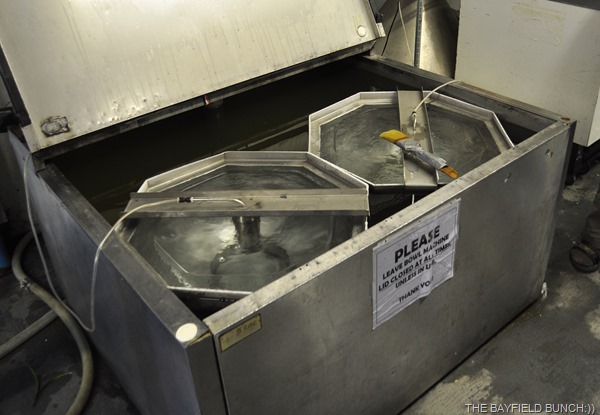 TWO PLAIN ICE BOWLES BEING SLOWLY FORMED…..WE WERE ALLOWED TO FEEL THE WATER ALONG THE BOWELS EDGES WHERE ICE WAS ALREADY ABOUT AN INCH THICK 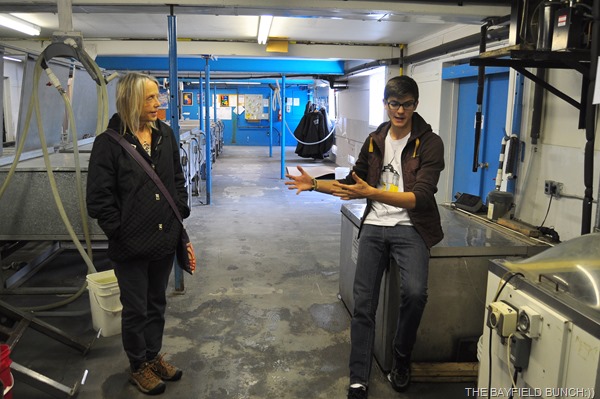 OUR GUIDE TALKS ABOUT THE FIRST ORIGINAL ICE MACHINE THE COMPANY STARTED WITH…..BOTTOM RIGHT FOREGROUND
Icesculpture does far more than the small ice creations we saw today & I really encourage readers to click on their website to see how truly well known this small company in Hensall is.  About The Company  Their core staff of 15 people have traveled to places like Thailand, Greece, & Dubai for example creating permanent ice sculptures inside huge buildings.  Here in Canada they built an ice bar in Toronto a few years ago & I do remember seeing that on the news.  Canadians may also remember a Canadian Tire commercial featuring a pick-up truck made of ice.  That truck was built & filmed right there in Hensall.  The commercial promoted Canadian Tire’s rugged low temperature ‘Eliminator’ battery.  Photos of that full size ice truck can be seen on their website. 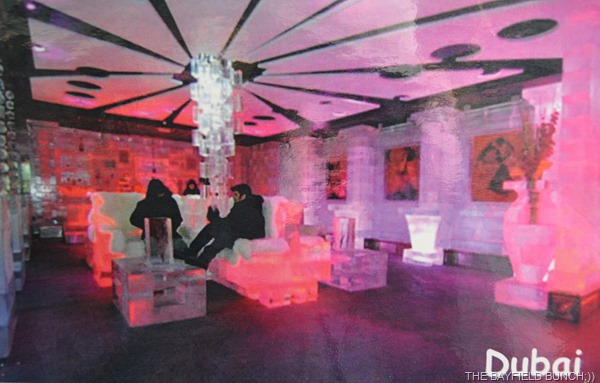 FROM A PHOTO ON THE WALL THIS IS IN DUBAI & ONLY THE FLOOR & CEILING ARE NOT MADE OF ICE….. IT IS THIS TYPE OF THING ICESCULPTURE SPECIALIZES IN AROUND THE WORLD
From the ice making room we were led back into the spacious freezer warehouse & display area & it was here where we were able to see some of the fine finished products of these talented local ice sculptors.  Also very interesting is Icesculpture’s connection to Nasa & how they worked together on an ice related project concerning the tragic loss of space shuttle Columbia. 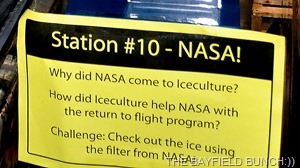 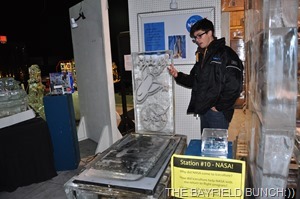 OUR GUIDE TALKS ABOUT THE NASA CONNECTION & COLUMBIA 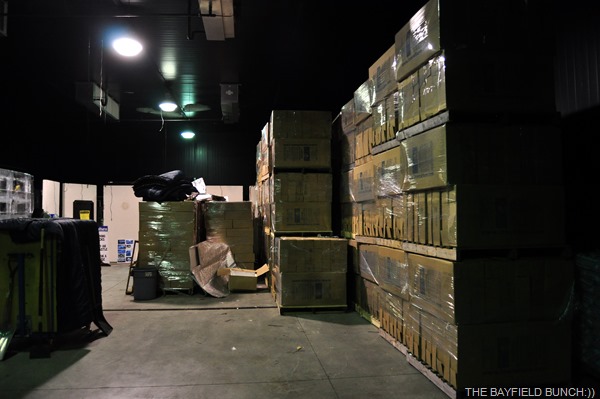 WE RE-ENTER THE LARGE FREEZER WAREHOUSE & DISPLAY AREA
My shaky hand held pictures in low lighting today do not do the ice creations justice but they will give you an idea of what we saw this afternoon.  Check the company’s website for much better photos.  I’m hoping the Live Writer album feature is working tonight so will try putting the sculptures into a slideshow format. 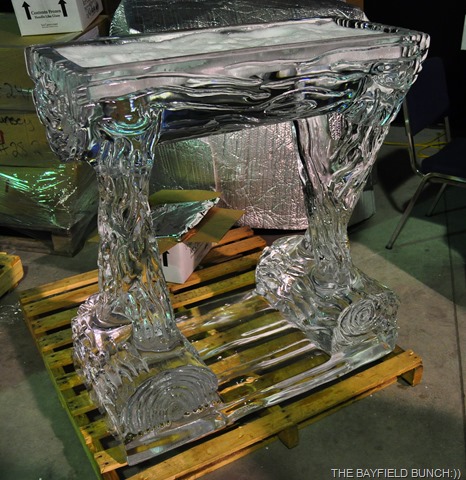 I REMEMBER OUR GUIDE SAYING SOMETHING ABOUT MAPLE SYRUP BEING POURED IN THE TOP OF THIS SCULPTURE REPRESENTING WOODEN LOGS
I recommend viewing the photos in the slideshow format.  Open the album then double click the first photo.  Screen appears with photo enlarged against a black background.  Move your mouse around a bit & look to the top left corner to where it says ‘Play slide show’.  Click on that & away you go:))


All & all it was a good day simply due to the fact we were able to get out & see something different again.  Best part it was right here in Huron County practically right in our own back yard.  I like when that happens:)) 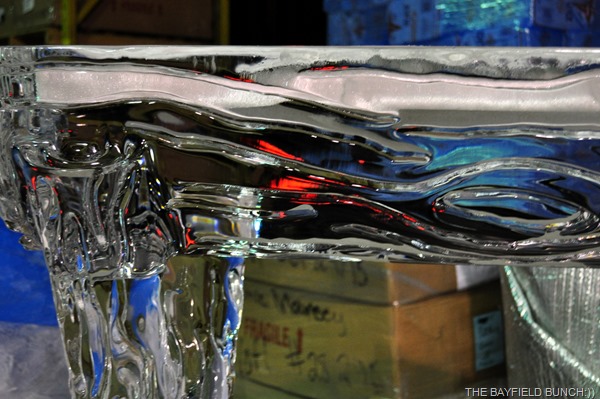 THIS IS PART OF THE MAPLE SYRUP SCULPTURE
GROANER’S CORNER:(( A new business is open and one of the owner’s friends wants to send him flowers for the occasion. They arrive at the business site and the owner reads the card: “Rest in Peace.” Understandably the owner is angry and calls the florist to complain. After he tells the florist the obvious mistake and how angry he is, the florist replies, “Sir, I’m really sorry for the mistake, but rather than getting angry, you should imagine this. Somewhere there is a funeral taking place today, and they have flowers with a card saying, ‘Congratulations on your new location.’”
Posted by Al Bossence at 7/24/2015