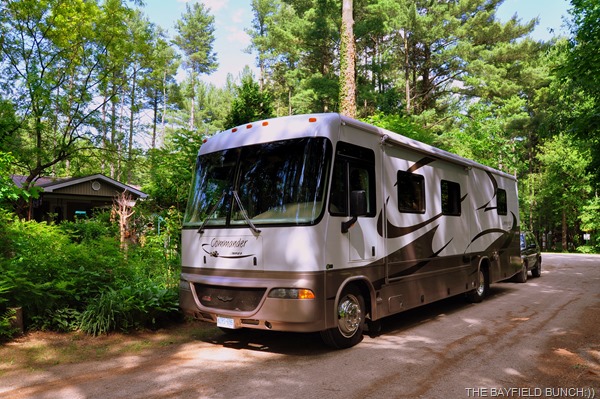 HOOKED UP & READY TO RUMBLE

A bit on the hot & sticky side today so my outside activities were somewhat curtailed.  Chain sawed down a 10' Pine tree stump to make a spot other than the carport for the utility trailer & took half a load of yard waste to the Park's recycle area.  I'm going to try & get in the habit of parking the Jeep Liberty in the carport.  After all that is why we had it built in the first place.  Had a little mishap moving things around this afternoon when I parked the motorcycle right next to our Pontiac Sunfire.  Apparently I didn't have the kick stand properly deployed & when Pheebs & got back from the recycle area the bike had fallen over into the Sunfire.  It's a very heavy motorcycle & I had quite a time straining to set it up back on it's wheels again.  Small dent & some scratches in the Pontiac's passenger door & it broke the mirror on my bike. 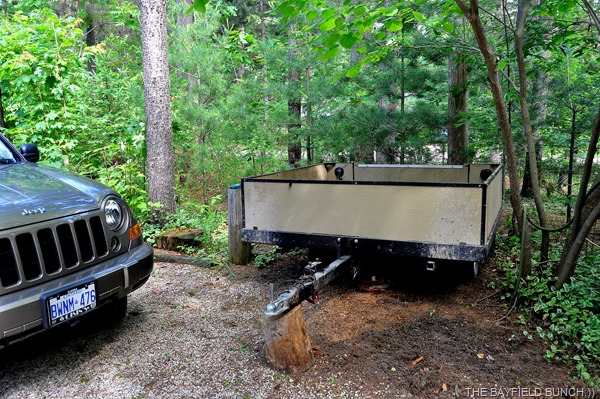 NEW SPOT FOR OUR UTILITY TRAILER DURING THE SUMMER MONTHS 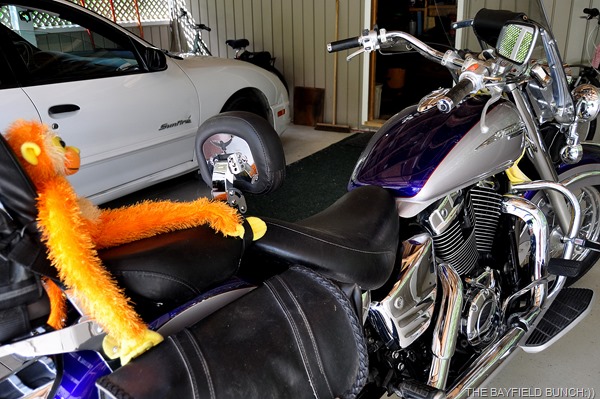 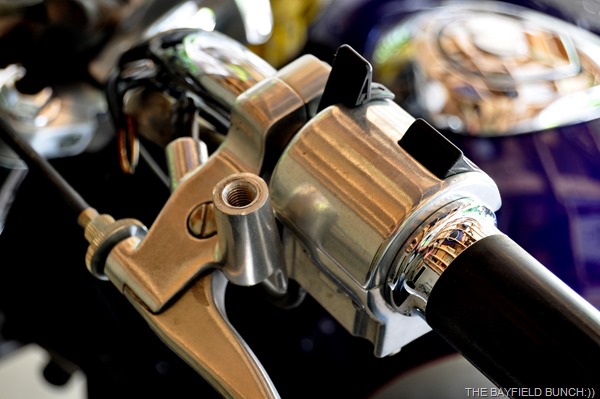 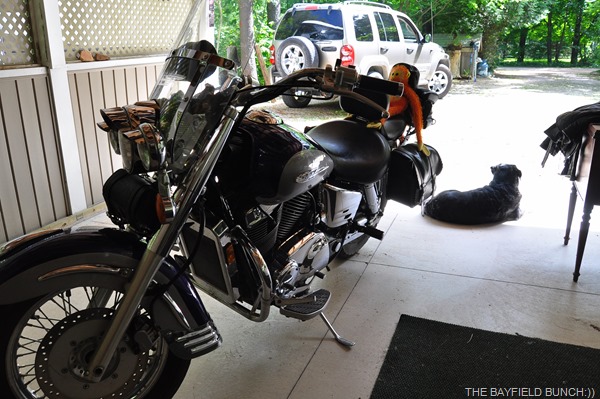 THIS IS ONE VERY HEAVY MOTORCYCLE WHEN YOU HAVE TO STAND IT BACK UP ON IT’S WHEELS FROM A LYING DOWN POSITION:((
Backed the Motorhome out of it's spot late this afternoon & parked it in front of the house.  Rolled the Jeep up behind & hitched it up.  We are off to London Ontario early Thursday morning.  Our first destination is FOREST CITY MOTORHOMES where we will leave the rig for them to repair the hydraulic pump that blew a valve a couple weeks ago.  Have to have the rig there at 9.  We bought our 2011 Class C Winnebago here in 2013 & they treated us very well.  From Forest City Motorhomes we will take the Jeep over to the other end of the city where Kelly has a 10 a.m. appointment with her liver specialist at University Hospital.  It is to go over the results of her blood tests & liver biopsy last month.  From there it is back to Forest City RV to pick up the hopefully finished & repaired Motorhome.  Hoping to make it back to Bayfield before predicted afternoon rains. 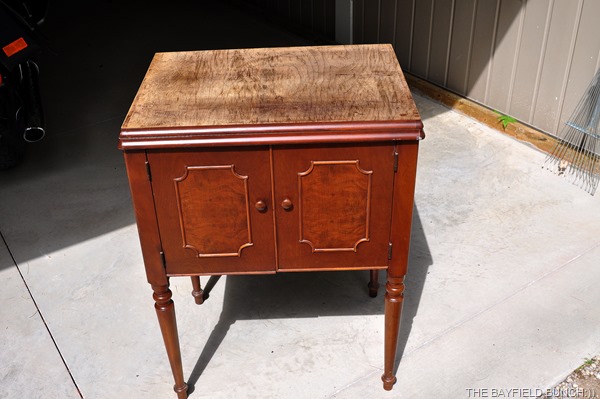 ON A MORNING WALK LAST WEEK KELLY FOUND THIS SEWING MACHINE CABINET DISCARDED IN OUR PARK’S RECYCLE AREA & IMMEDIATELY WALKED BACK HOME, GOT IN HER SUNFIRE & CAME BACK TO RETRIEVE IT 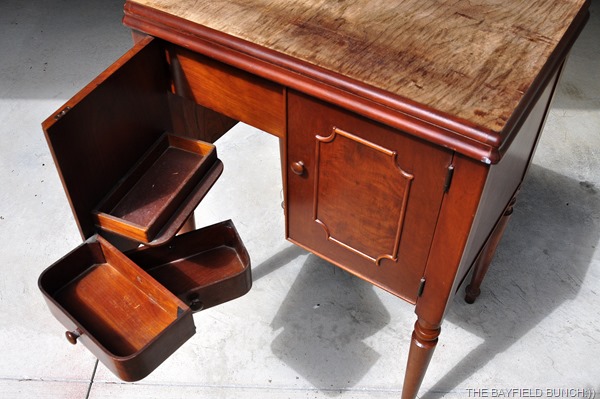 Thanks to Steve in our Shout Box for the link to Great Lakes and Seaway Shipping.  With that helpful link I was able to go to the site & look up all the info on the great lakes freighter I had featured in my Tuesday post.  It has an interesting history being originally built in Germany as a sea going vessel.  You can read about the Cedarglen here & see why Cedarglen was not it’s only name. 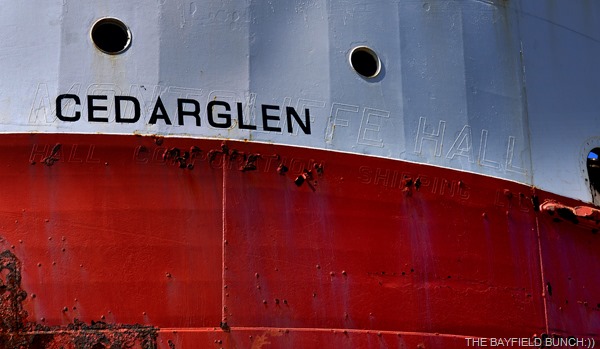 IF YOU LOOK VERY CLOSELY AT THIS PHOTO YOU CAN ACTUALLY MAKE OUT THE LETTERS OF WHAT THIS SHIP’S PREVIOUS NAME WAS
Several times in previous posts I have reflectively said ‘if only we could have started our RV life earlier than we did.’  I still feel that way of course & this following paragraph coming from a fellow Blogger brings it home on a very personal level as to why that is.  Sherry from IN THE DIRECTION OF OUR DREAMS writes, “ {Those of you younger than we are who are waiting until you “have enough money", “can get full retirement” or any of the other standard reasons for working 40+ years, take heed.  That Life is SHORT is a very serious understatement and unless you take some risks you may not have the freedom to follow your dreams until it is too late to do it.  How much money you need depends entirely on you and how much you actually have to spend to maintain a lifestyle that makes you happy.  It’s not money but your health that will determine your joy.  So be careful”}.  Now having read this paragraph I suggest you go back & read the 7 paragraphs preceding this one at NOT SUCH A GREAT WEDNESDAY. 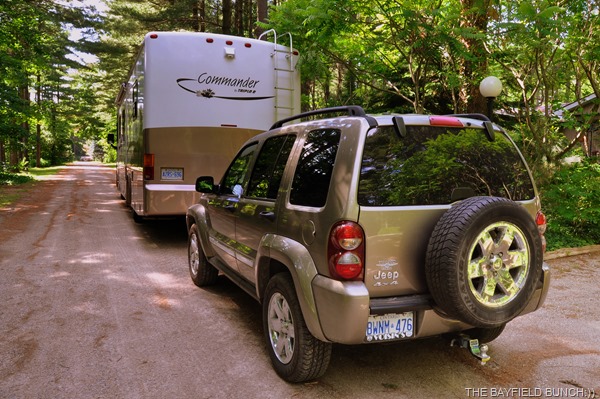 GROANER'S CORNER:(( A policeman arrives at the scene of an accident, in which a car smashed into a tree. The officer rushes over to the vehicle and asks the driver, "Are you seriously hurt?"  "How do I know?" the driver responds. "I'm not a lawyer!"

Ditzy friend to another: "I failed the driving test. I entered the traffic circle and the sign said '30' so I drove 30 times around." The other one says sympathetically, "You probably counted wrong."

When asked for her occupation, a woman charged with a traffic violation said she was a schoolteacher. The judge rose from the bench. "Madam, I have waited years for a schoolteacher to appear before this court," he smiled with delight. "Now sit down at that table and write: 'I will not pass through a red light' five hundred times!!"