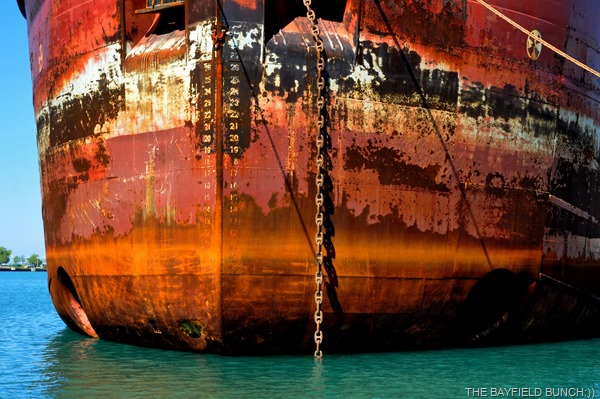 Each & every morning she follows me around everywhere I go like a tight knit little black shadow.  She waits for me to put my shoes on then watches closely to see if & when my hat goes on.  With anticipation building she is soon over the top happy when she see's me picking up my two cameras.  At this point she knows without doubt it is going to be 'a ride in the Jeep’ time:)))) 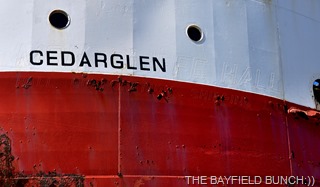 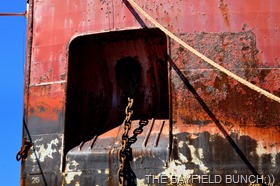 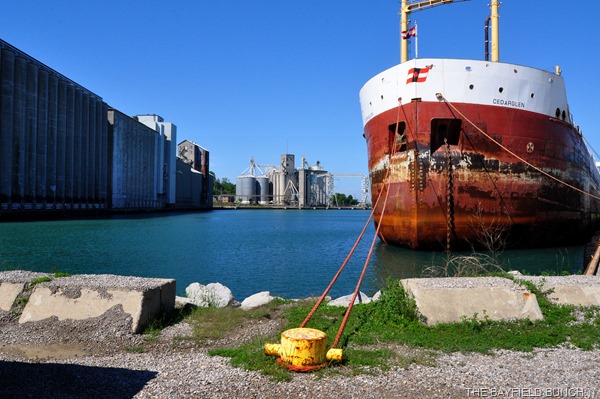 GODERICH GRAIN ELEVATORS ON THE LEFT

With sky's rapidly clearing I knew Pheebs & I were needing a part of that action so it was off to Goderich with us.  Our stop at the TSC store  this morning netted us a big bag of wild birdseed.  Up the road to McDonald's for a Burrito, a muffin, & a coffee to go.  Minutes later we were down at Goderich’s north harbor sitting by the water wolfing down our yummy breakfast.  I parked us right up alongside a big hulking lake freighter anchored there & I think it is the same one which spent this past winter in the same spot.  It obviously sailed away somewhere earlier in the Spring but it’s back now.  Sure needs a paint job & I suspect a whole lot of TLC.  Sitting high out of the water I figured it's cargo holds were empty. 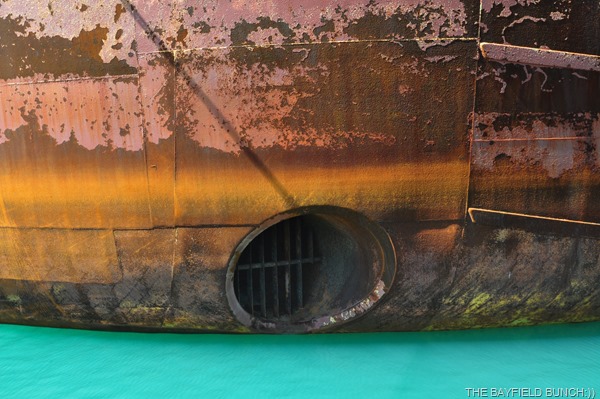 THIS PORT SIDE BOW THRUSTER WOULD NORMALLY BE UNDER WATER…PORT SIDE??  OK IT’S THE LEFT SIDE:)) 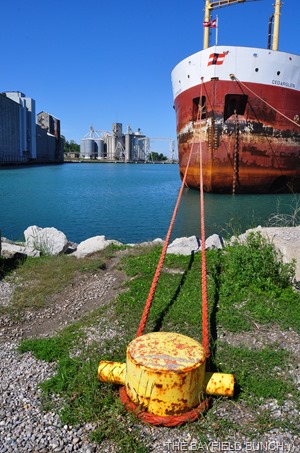 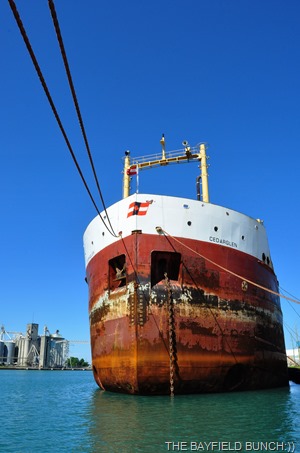 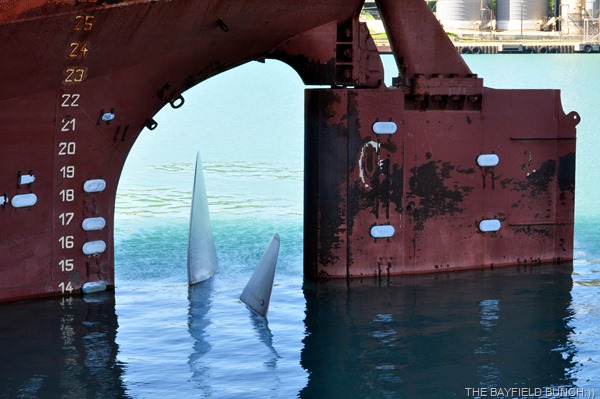 OH LOOK, 2 WHITE FIN SHARKS SWIMMING AROUND THE STERN OF THE SHIP…OK OK SO THEY’RE JUST 2 PROPELLER BLADES STICKING OUT OF THE WATER

Leaving the harbor we took a drive up around the airport but again it had no aircraft sitting around.  Too bad because at one time it was nice to drive up around that way & see airplane's coming & going.  Have not seen a single airplane sitting on the tarmac for the past half dozen times I've driven around that way.  I think the runways are still operational but the airport which played an important role back in the early 40's has seen it's better days.  I read a book a couple years ago about a lady flyer who ferried aircraft across the Atlantic Ocean during the war & some of her initial training was done at that little airport just north of Goderich. 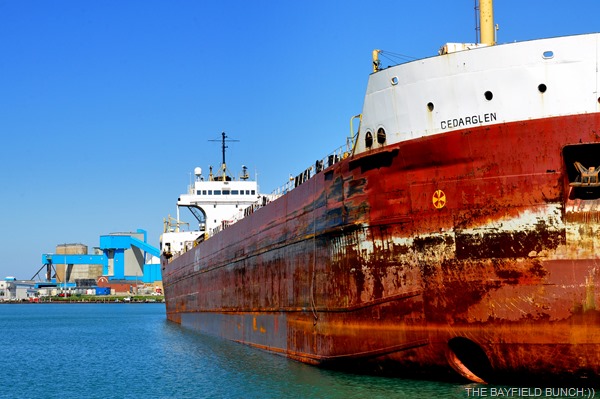 BLUE STRUCTURE IN BACKGROUND IS THE ABOVE GROUND VISIBLE SIDE OF GODERICH’S SIFTO SALT MINE…THIS IS A 55mm SHOT GIVING THE PHOTO A CORRECT PERSPECTIVE AS TO NORMAL SIZES & HOW THE HUMAN EYES SEES IT. 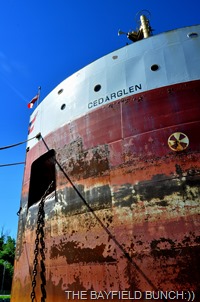 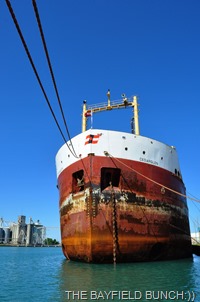 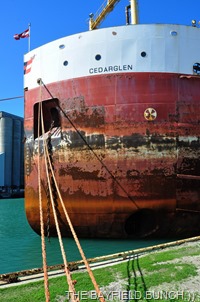 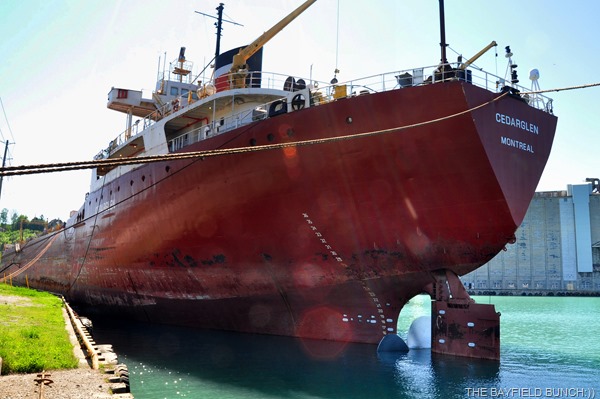 A stop near the Tiger Dunlop tomb had Pheebs & I out for a walk on the Menesetung trail.  It was just one of those perfect weather mornings with warm temperatures & a cooling breeze coming in off the lake.  Air was light & clear with no humidity.  Just one of those 'feeling good' mornings as we strolled along the old railway line now turned into a trail.  Pheebs & I also made it around our pine tree trail here in the Park this afternoon for the second time this week & both times I have taken my clippers & did trail maintenance along the way.  And without any oppressive heat & humidity in the air we didn’t even have any pesky bugs biting or stinging us.  Bonus:)) 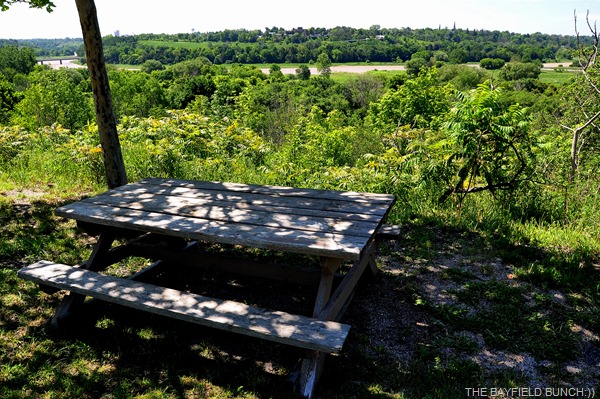 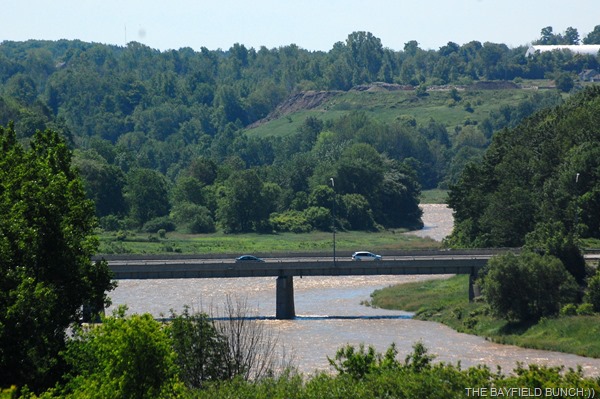 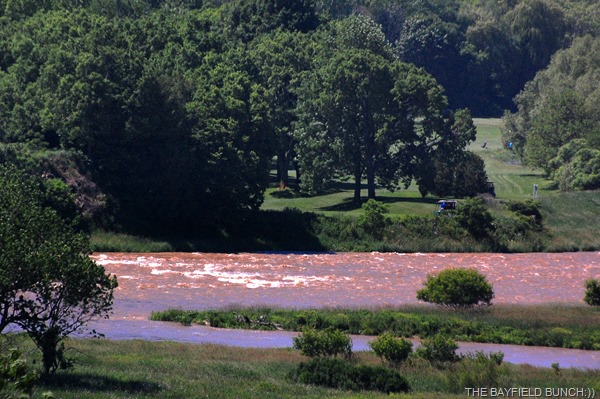 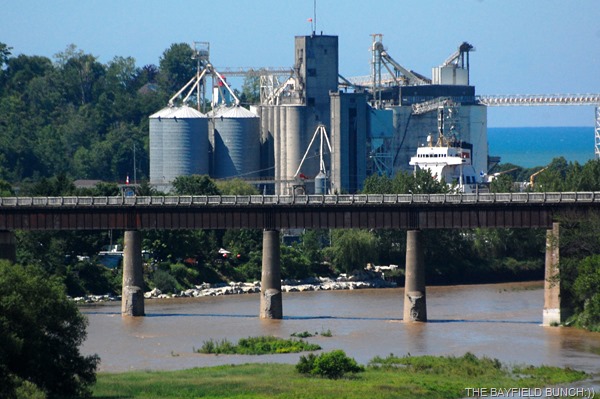 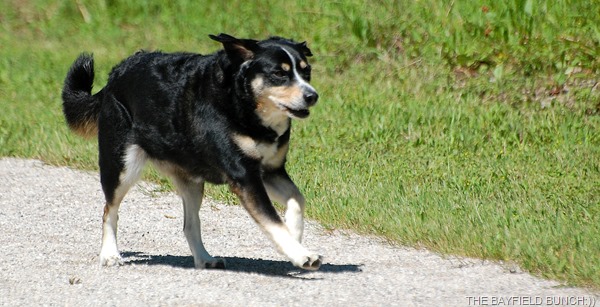 With rain moving in Monday night & while checking vehicle windows to make sure they were closed I heard a beeping sound somewhere.  Finally tracked it down to the Motorhome.  With repeated cloudy days the solar charge on our house batteries was down with not enough charge left to even start the generator to charge the batts up again.  Quickly hooked up some shore power & all was well with happily charging batteries again.  Have to remember to keep an eye on that especially with back to back cloudy days………. 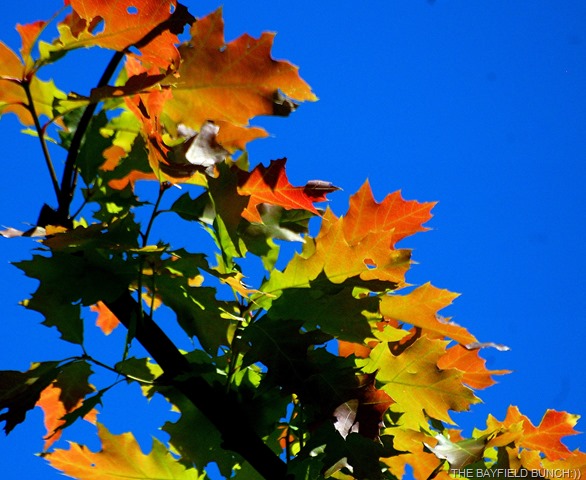 GROANER’S CORNER:(( A passenger train is creeping along, painfully slow. Finally, it creaks to a complete halt. A passenger sees a conductor walking by outside. "What's going on?" she yells out the window.  "Cow on the track!" replies the conductor.  Ten minutes later, the train resumes its slow pace. Within five minutes, however, it stops again. The woman sees the same conductor walking by again. She leans out the window and yells, "What happened? Did we catch up with the cow again?"