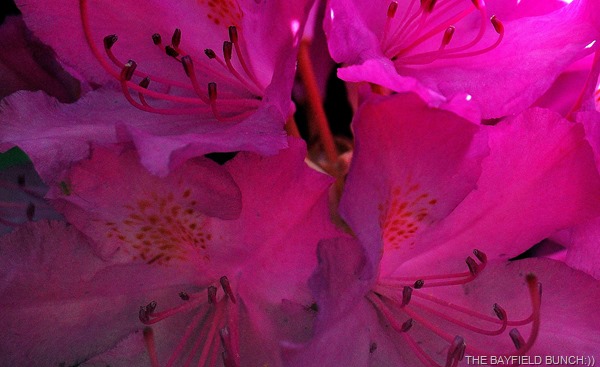 Cloudy days are not always inspirational photography days for me but after sitting in the house all day on a rainy Friday Pheebs & I were needing to get ourselves outside & surround us with some clear & fresh country air.  We wandered up to Goderich cause I had seen a few things in the TSC (Tractor Supply Company) flyer I figured I might like to have.  Store was busy, couldn't find what I was looking for as usual & the staff was tied up with customers.  I was in one of my Scrooge moods anyway & with no patience left I exited the store empty handed.  One Burrito, one carrot muffin & one McDonald's coffee later Pheebs & I were soon on our way out of town heading for the peaceful countryside. 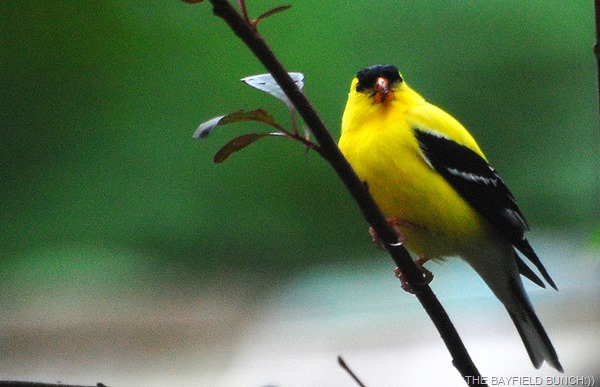 NATURE’S EYES ARE ALWAYS UPON US IN OUR SUNROOM 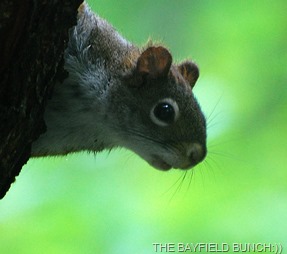 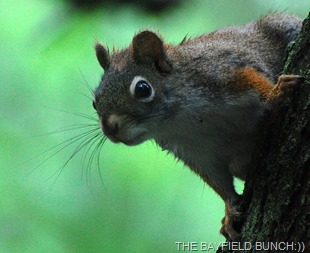 Our first stop was at the Animal Farm near Dungannon Ontario so Pheebs could jump out & touch base with all her Llama & Alpaca Pals.  Pheebs has a gentle way with other animals (remember all that cow smooching a few years ago in Arizona) & if the fence hadn't been there I'm sure she would have had some Alpaca-Llama smooches going on. 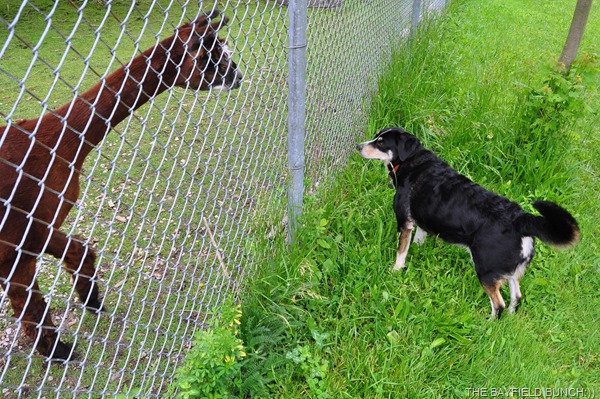 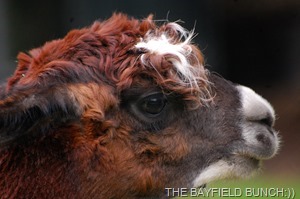 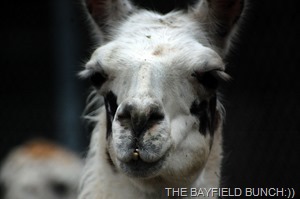 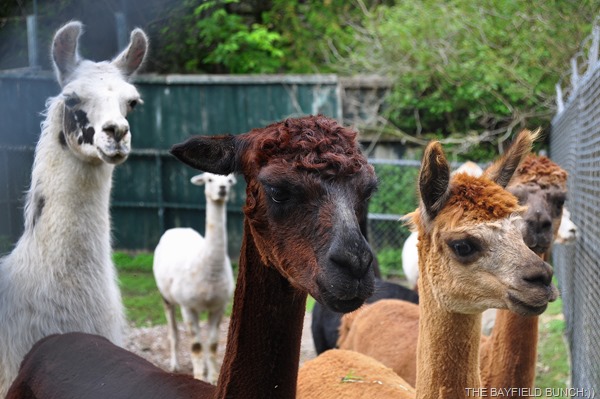 OF COURSE ALL EYES ARE ON THE PHEEBS AGAIN

While standing by the fence I noticed something a few pens away that looked a lot at first like a big bird crash.   On closer inspection after seeing the ball of feathers slowly regain some kind of shape I saw it was a male Peacock & by golly he was soon showing himself off with a full display of feathers.  A female Peacock stood nearby but just ignored Mr. Peacocks colorful advances.  It was indeed quite a display of feathers he had going on for her. 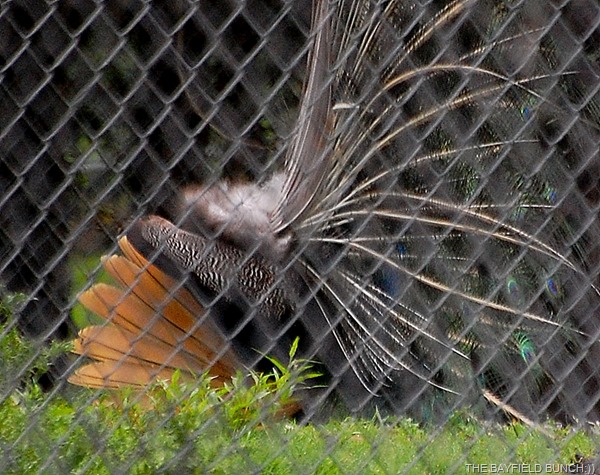 WHEN I FIRST CAUGHT SIGHT OF THIS I COULDN’T FIGURE OUT WHAT IT WAS, THOUGHT MAYBE A LARGE BIRD HAD CRASHED 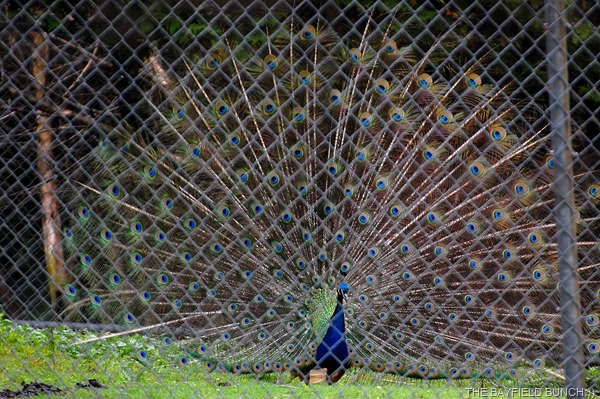 HERE’S THE MALE PEACOCK FROM THE FRONT 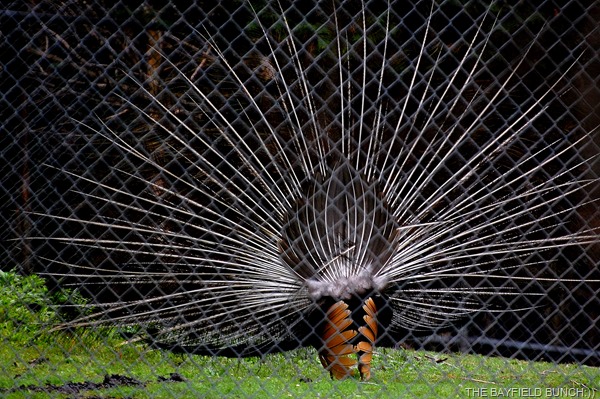 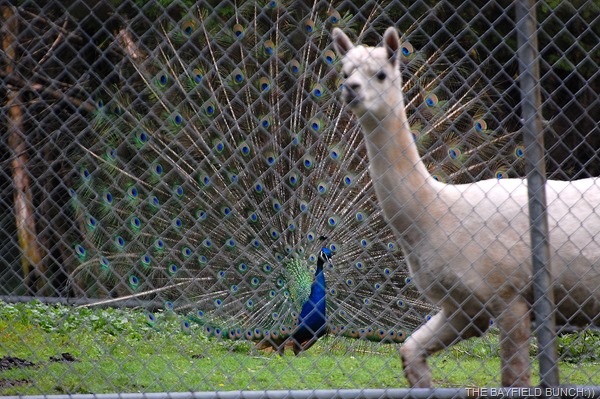 NO THAT BIG WHITE GUY IS NOT MRS. PEACOCK

Stopped to watch 3 Mother horses with 3 Baby horses on a Mennonite farm.  One of the youngsters could not have been too old because it's legs were still wobbly.  I know there is correct terminology for Mother horses & Baby horses but not being a farm boy myself those correct names escape me for the moment.  Yes I know I could Google it………….. 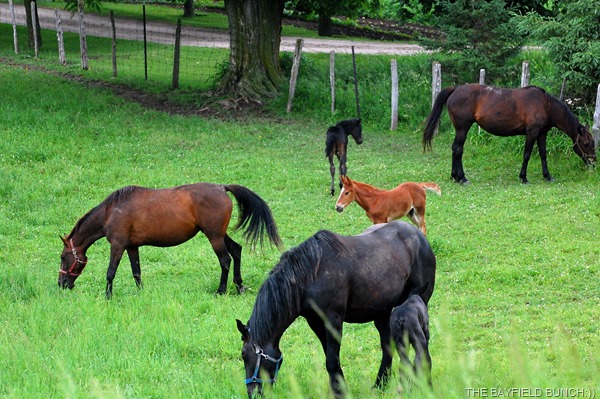 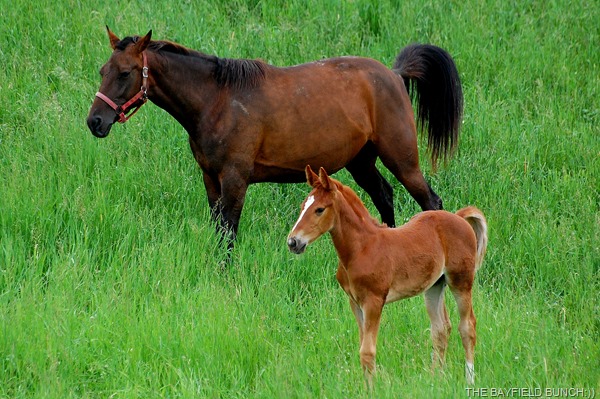 Made our way to Lake Wawanosh northeast of Dungannon & took ourselves for a wee walk along the shoreline.  I like stopping here because there is never anyone else around.  Watched a distant Blue Heron doing some fishing.  Always so nice to surround one's self with the quietness of a rural countryside. 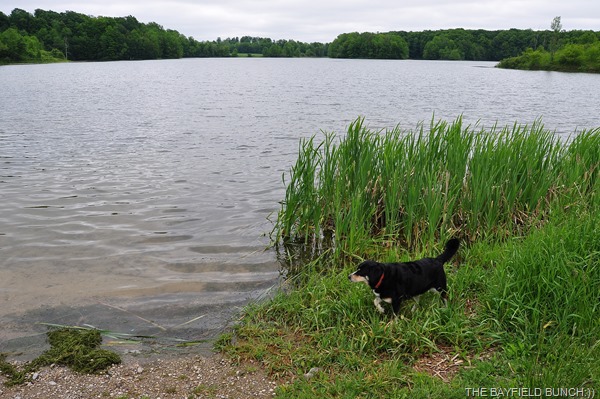 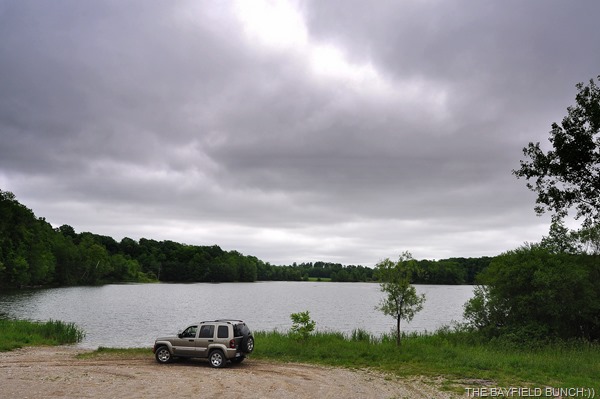 A CLOUDY DAY AT LAKE WAWANOSH 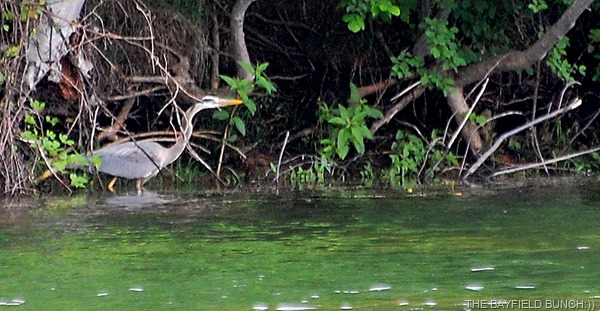 Thanks to folks for letting me know my Live Writer album slide show test worked in Thursday night's post.  Finally a step forward & about time I’d say.   I will continue to use the Live Writer album format to include extra photos in my posts from time to time such as tonight with a few extra photos from today's country drive.

A fine post by Stewart over at Seasons in the Valley as he reflects back & looks forward to the future after the death of his Son last month in a tragic water bomber aircraft accident in Alberta, Canada.  In his latest post Stewart not only writes of his late Son's dreams but writes now of his own as well. Pursuing Your Dreams 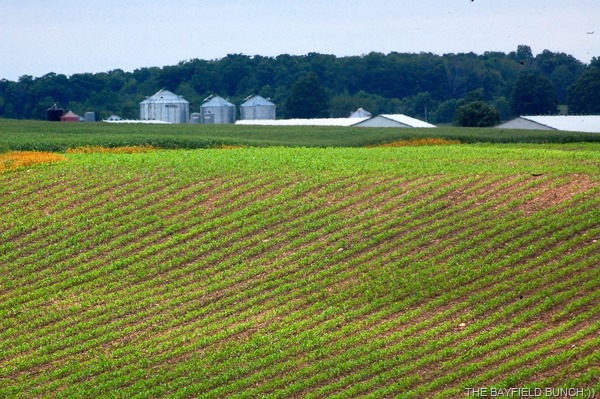 In case any of you have lost track of Chinle over at Spotted Dog Ranch the past few months you can find her in Alaska these days.  She's kinda finding it the way she remembered it & yet, it's different.  Might want to catch yourself up on her last few posts to see what she is doing there.  And hey, she must be getting close to Santa's house cause she's got reindeer pictures in her June 12th post:))  Check out Chinle’s latest happenings at Searching For Russia.

GROANER’S CORNER:((     An engineer, a psychologist, and a theologian were hunting in the wilderness of northern Canada.  Suddenly, the temperature dropped and a furious snowstorm was upon them. They came across an isolated cabin, far removed from any town. The hunters had heard that the locals in the area were quite hospitable, so they knocked on the door to ask permission to rest.  No one answered their knocks, but they discovered the cabin was unlocked and they entered. It was a simple place ... 2 rooms with a minimum of furniture and household equipment. Nothing was unusual about the cabin except the stove. It was large, pot-bellied, and made of cast-iron. What was strange about it was its location ... it was suspended in midair by wires attached to the ceiling beams.  "Fascinating," said the psychologist. "It is obvious that this lonely trapper, isolated from humanity, has elevated this stove so that he can curl up under it and vicariously experience a return to the womb."  "Nonsense!" replied the engineer. "The man is practicing the laws of thermodynamics. By elevating his stove, he has discovered a way to distribute heat more evenly throughout the cabin."  "With all due respect," interrupted the theologian, "I'm sure that hanging his stove from the ceiling has religious meaning. Fire LIFTED UP has been a religious symbol for centuries."  The three debated the point for several hours without resolving the issue. When the trapper finally returned, they immediately asked him why he had hung his heavy pot-bellied stove from the ceiling.
His answer was succinct. "Had plenty of wire, not much stove pipe."