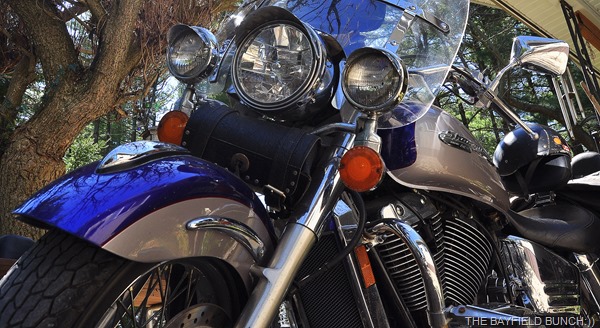 FINALLY GOT THE BIKE FIRED UP THIS AFTERNOON FOR ANOTHER SEASON:))

We could have had the stone chip in the Big EEE's windshield fixed right here in our own driveway this morning but I opted to take the rig right to Speedy Glass in Goderich.  I’ll take any excuse for a drive in the country on a nice sunny morning.  Speedy Glass is the same company who in July of 2011 came right to our house & repaired a stone chip in our then 2003 Damon Challenger.  Nice chap by the name of Murray did the job that time.  This morning it was another fellow by the name of Mike who did the repair on the windshield in under an hour.  Just enough time to let me have a rare ‘sit down’ breakfast at McDonald’s next door.  Again, a job well done & I can hardly see where the stone chip is anymore.  To see how that excellent mobile windshield repair went at our house on the Damon back in 2011 just click on Damon Windshield Repair 2011. 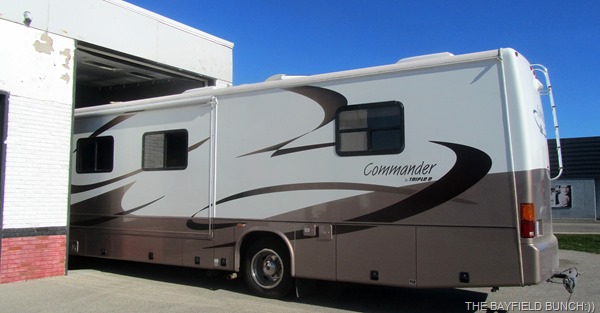 THAT’S MURRAY ON THE LEFT & MIKE ON THE RIGHT…THANKS FOR A JOB WELL DONE GUYS:)) 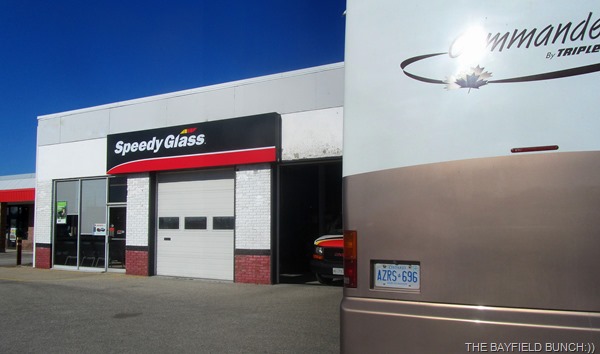 I was very fortunate today in that I woke up this morning with an abundance of patience on my side which in turn stood me in good stead for the entire day & enabled me to accomplish a bunch of little puttering tasks with a minimum of aggravation.  Days like this are rare now at this older age & when they do come along I sure do appreciate my ability to accomplish things in a calm state of mind.  Never had to turn the air blue nor throw my hat on the ground & jump on it.  Each obstacle I encountered I was able to patiently surmount.  Oh it was a rare day indeed………………………… 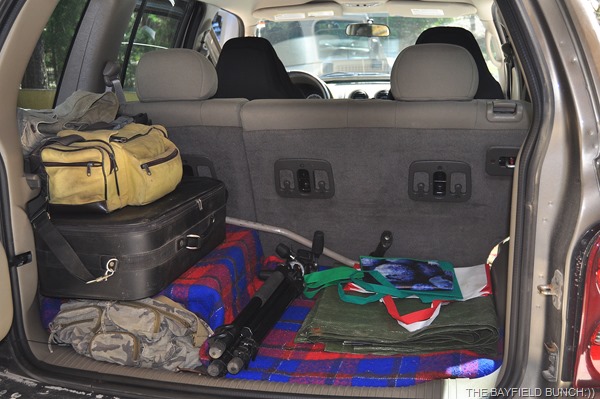 EVEN WITH ALL MY CAMERA GEAR ABOARD THERE IS STILL LOTS OF ROOM IN LIBBY’S STORAGE AREA BEHIND THE BACK SEAT…NICE:))
It's not often I am able to get a laugh out of myself but about 2:25 this afternoon just as I cracked my 2002 Honda Shadow Aero 1100cc motorcycle into second gear & cranked the throttle wide open I heard a surprised laugh come out of me followed by a big 'WOW'.  Yessiree it was that first blast of crisp Spring air in the face again as I let the bike's torque try to separate my helmet from my head.  With a tightening grip on the handlebars & a big cheesy grin on my face I barrelled east straightaway into the wind. With bright blue skies & big fleecy white clouds overhead it sure was a nice feeling just cruising down Bayfield River Road feeling that open road freedom known only to those ‘first ride of the season’ bikers.  It was 2015's first run of the year & the bike ran great with no 'over the winter' problems.  Bike is sure needing a big Spring clean-up though.  Well come to think of it I could probably use a big Spring clean-up myself……………… 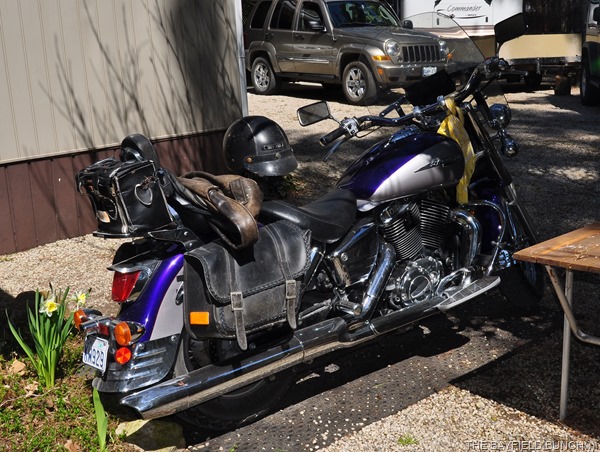 NO THIS ISN’T THE BIKE I GOT ALL MUDDY YEARS AGO, THIS IS MY CURRENT HONDA SHADOW AERO JUST OUT OF WINTER STORAGE
I have kept a record for the past 20 years of the date I put my motorcycle into storage & where it is stored.  I record the mileage as well & jot down the date each Spring I get the bike back out of storage & on the road again.  Today's May 1rst date is the latest I have ever fired up the bike for the year.  Earliest I ever hauled the bike out of storage was for a few hours one time in January of maybe 1999 or the year 2000.  We were in the old rented Fullarton farm house at the time when we had a ‘very brief’ spell of unusually warm weather.  I remember walking out to the old barn one day & putting the battery back in the bike.  Fired it up & drove my 750 Yamaha Virago down the muddy barn bank, up an even muddier driveway & headed off down a mud & gravel laden country road like Jack the Bear.  What a muddy mess I was & you shoulda seen the poor bike.  Oh some of the crazy things we did in our younger years eh.  Think I was about 56 at the time. 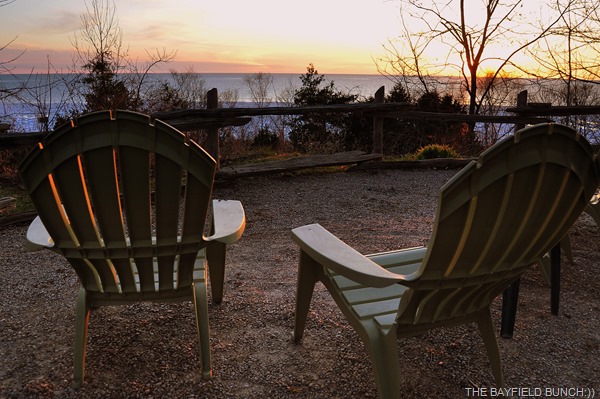 With temperatures finally on the rise again I may get some vehicles cleaned up Saturday.  Maybe even take little Bugs for a ride in the Libbygator.  She just goes absolutely Bonkers if & when she thinks she is going somewhere whether it be in the Jeep, the Sunfire, or the Big EEE but I know it is the Jeep rides she loves the most.  Now if I could just get me a sidecar & a pair of doggy goggles for the motorcycle. 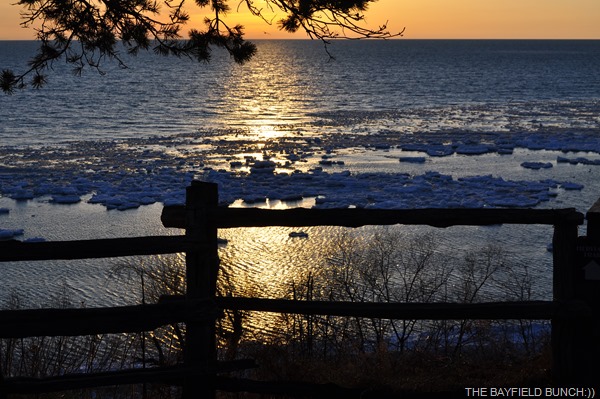 GROANER'S CORNER:((  I was a manager at a toy store. A few years back during the height of the Furby craze I overheard one of my cashiers say to a customer, "We haven't had any for a while, and I doubt we'll be getting any soon."  I quickly assured the customer that we would have a shipment in next week After she left, I read the cashier the riot act. "Never tell a customer that we're out of anything. Tell them we'll have it next week. Now, was she looking for a Furby?"  "No ..."  "Well, what was it she said she wanted?"  "Rain."

The band at Ellsworth Air Force Base, South Dakota, was required to play for all generals who arrived on base. One morning, when the commanding officer heard on the radio that a General Frost was expected just after noon, he sent the band scrambling to the flight line with instruments.  One of the musicians had also heard the radio announcement. He took the C.O. aside for a whispered conference. When they returned, the officer told us the performance was cancelled.  There was no arriving general. We had almost played for the weather forecast.