BAYFIELD RIVER ALONGSIDE THE BAYFIELD PIER AT TWILIGHT

When we had the Jeep Wrangler in for it's pre-safety check last week a pinion seal was noticed leaking in the front differential or something.  Although not part of the safety check certificate requirement we did not feel right selling the Jeep knowing there was a problem like that with it.  This morning we dropped Jeepers off at the Bayfield Garage & bit the bullet to the tune of $93 to have that leaking seal replaced.  Not so good for us but a bonus for the Jeep's new owner whoever that turns out to be. 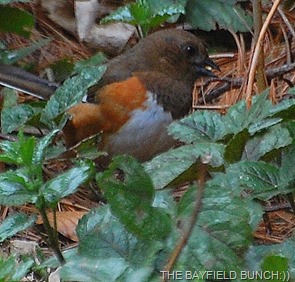 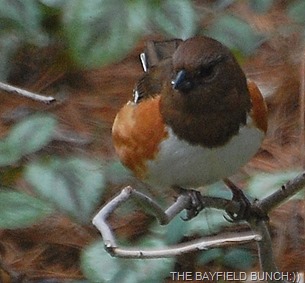 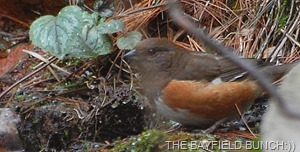 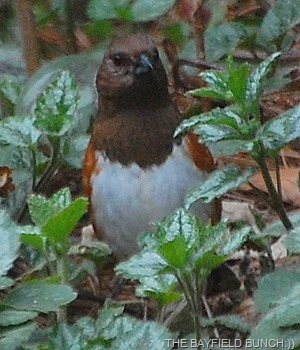 I’M NOT SURE IF I HAVE SEEN THIS LITTLE FELLOW AROUND BEFORE BUT HE SEEMED TO BE HANGING AROUND WITH THE DARK EYED JUNCOS
Been a few years since we've gone out & had ourselves breakfast anywhere here in Bayfield but after picking up the Jeep later in the morning we decided to try out a place that has changed management a few times & we had heard good things about the latest owners.  Sure enough those good things were true & we both had us a big mess of bacon & eggs at a fine civilized price of $6.99 each.  Especially liked the restaurant's own real tasty potato fixins.  Two thumbs up for Renegades Diner in Bayfield. 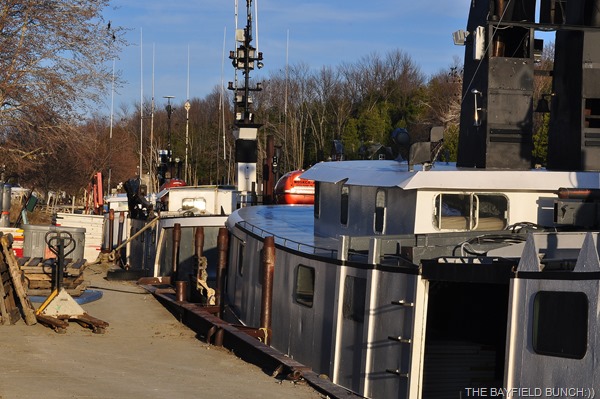 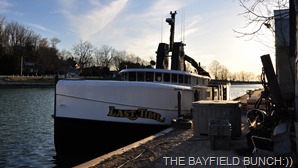 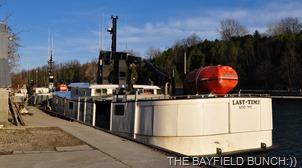 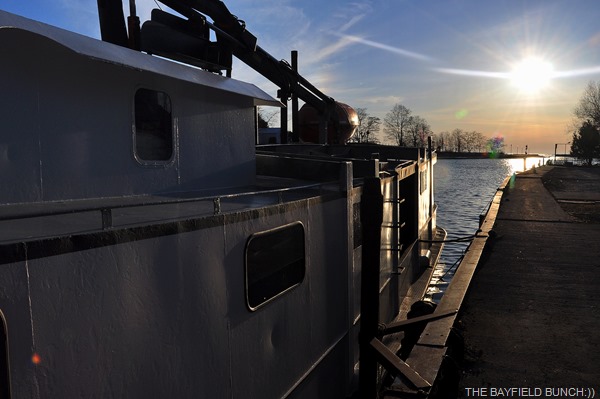 It was one month ago today we arrived home from the Southwest & it was today I finally got out there in the rig & vacuumed the floors.  If & when some warmer weather arrives someday I'll get me some windows cleaned up & some bins cleaned out.  And the outside is needing a good shining up too.  Just a few more things to stroke off my 'to do' list when I get to them.  And we do all have those lists don't we............................. 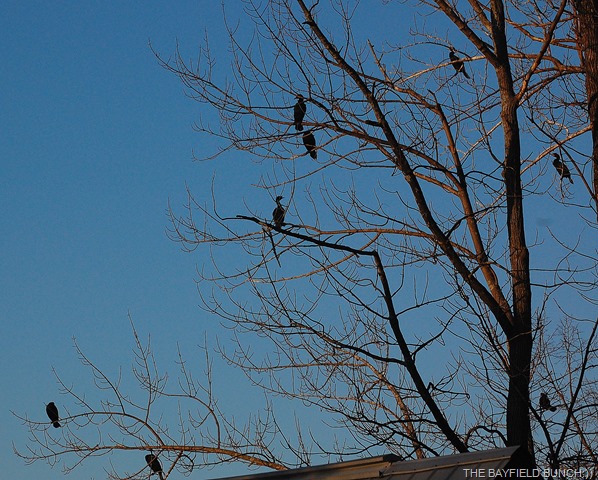 JUST AN OLD BUZZARD TREE
Our cold damp overcast morning finally gave way to clearing skies this afternoon but I was too comfortable & toasty warm tucked into my cushy recliner to venture outside.  Besides, the outside air was still cold.  Relaxed & entertained myself by watching a few documentaries on Roku. 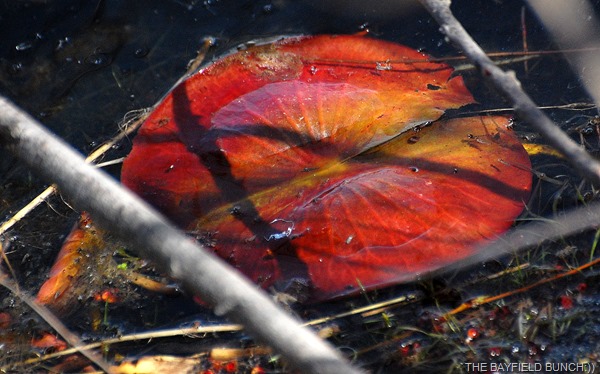 LILY PADS ARE BEGINNING TO EMERGE FROM MUDDY POND BOTTOMS 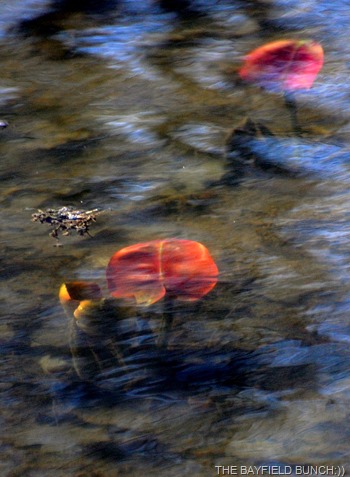 Wrote up a 'Jeep Wrangler For Sale' ad a few days ago & took a few additional pics of the Jeep this morning which Kelly was able to get into the Auto Trader, Kijiji, & Craig's list.  We'll see if we can stir up any interested buyers.  Not easy for me letting Jeepers go but I just have to stay focused on why we decided on a different vehicle.  A/C, ease of entry & exit for my legs, roomier back seat & much needed storage space.  Back seat power window ventilation for Pheebe.  Bigger tires make for a smoother ride although I think the Wranglers seats are more comfortable than the Jeep Liberators.  48,000 kms as opposed to 184,000 kms is a big plus too.  When I stand at the window looking out at the Wrangler & Liberty in our driveway it is the Wrangler my eyes go to with it's tough squat Bulldog look.  The Liberty is more aerodynamically designed but it's that 'attitude' look of the Wrangler that grabs me.  Yes I'm going to miss little Jeepers alright but it's time to adapt to changing needs & move on. 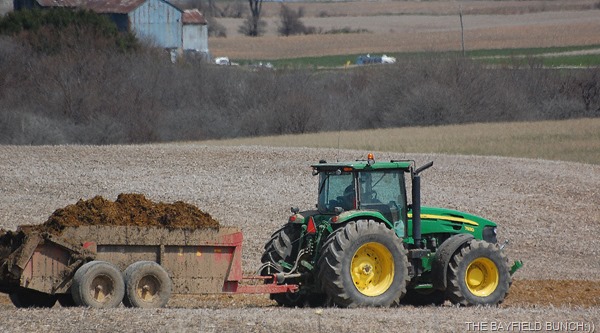 OUR LOCAL COUNTRYSIDE IS BECOMING QUITE AROMATIC THESE PAST FEW WEEKS
Oh but here's something I am not going to miss about driving a Jeep Wrangler.  The wave!!  Wrangler drivers like Motorcycles riders have this wave they often greet each other with.  Personally I'm not a waver & yet not wanting to appear rude I always wave back if another Wrangler driver waves at me first but I never initiate a wave.  Do you realize how fast your reflexes have to be as 2 Wranglers approach each other on a highway at a combined speed of 120 mph.  My total concentration is on the driver's windshield as we hurtle towards each other.  My eyes are glued on the other driver as he closes in.  Then I'm watching, watching, & watching for the slightest movement of the driver’s hand which could signal a coming Wrangler wave.  My reflexes are so fast the other drivers hand has barely lifted off the steering wheel & I've already got a big Howdy Doody wave going on as he goes blasting by.  My personality is such that if I miss returning a big Wrangler wave I feel bad about that.  But if there is no movement of the other driver's hand then there is no movement of my hand & we both blow by each other with our noses in the air.  Nope I'm not going to miss that little bit of gamesmanship at all.  Really want to know what I think about all that hand waving stuff??  Check out my HOWDY DOODY post from a few years back:))

THAT DARN LAKE HURON ICE IS STILL HANGING ON IN SPOTS
At our Canadian Tire Stores here in Canada they have a thing when purchases are made where they hand out what we Canucks refer to as Canadian Tire money.  Kind of looks like real paper money in a way & comes in dominations of 5 cents, 10 cents, 50 cents, & maybe even a dollar.  Not sure about the dollar one because I've probably never purchased enough at one time to get a dollar coupon back.  A lot of people including myself save up this Canadian Tire money & when we have maybe 5 or 10 dollars worth we'll use it to buy something.  Of course the clerk always has to count out the stack of Canadian Tire money your using & that can take half a minute or two if you have a lot of 5 cent coupons!!  Wednesday morning at the Canadian Tire store in Goderich & got behind a lady who had just purchased herself a brand new bicycle.  The clerk rang it up & it came to somewhere around a hundred dollars.  With a beaming smile big as a Cheshire Cat the lady pulls out a wad of Canadian Tire money big enough to choke a horse & plops it down on the counter.  Of course I’m standing right behind her holding onto a 750 pound bag of birdseed.  With only one cashier on Wednesday morning do you know how long it took her to count that lady’s $77.45 stack of Canadian Tire money.........I do & my arms are stretched so far down now my hands drag on the floor!!!!  Birds are happy though………. 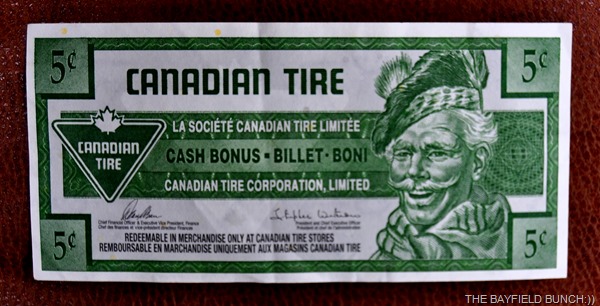 Off to Goderich first thing in the morning to get a stone chip in the Big EEE's windshield fixed.  Could take a couple hours so I don't think the Pheebs will be going with me.  I don't plan on telling her where I'm going because I'm sure the little Smarty Pants knows McDonalds is right next door to the Speedy Glass place & she would never let me out of the house without her. 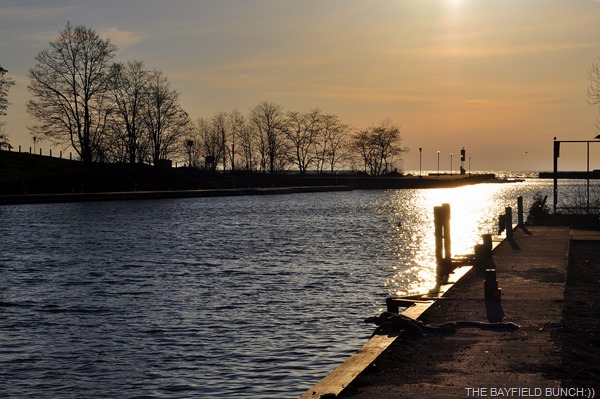