AND NEITHER ONE OF US WOKE UP WITH ANY ‘BUYERS REMORSE’:)) 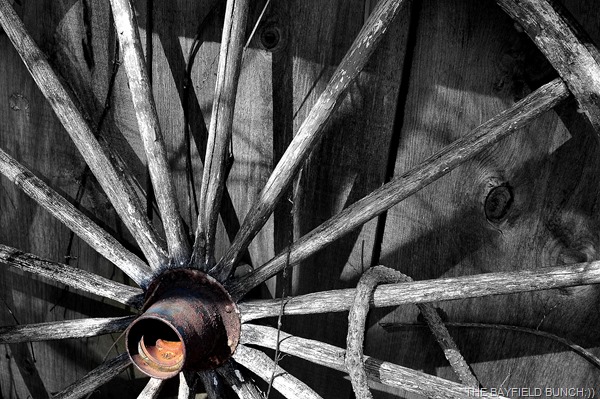 It's mid April & our Peeper Frogs are back.  How nice each night to hear sounds of tiny little frogs peeping up a storm out around our small front yard pond.   Buds beginning to appear at the ends of twigs & branches.  A few early Spring flowers struggling up through winter's left over residue.  It's always an encouraging time of year to see Nature's true beauty slowly returning to it's annual upcoming summertime glory. 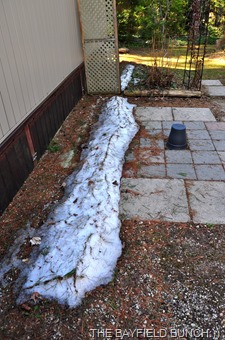 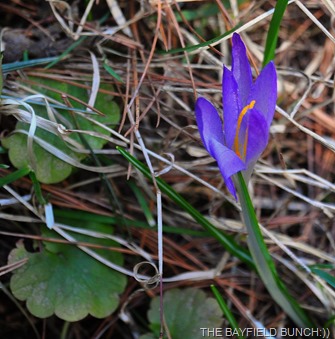 WE STILL HAVE SOME SNOW ALONG THE NORTH SIDE OF OUR HOUSE & I SPOTTED OUR FIRST SPRING CROCUS
Turned on our outside water again & hauled out the pressure washer.  A lot of Arizona desert dust & road grime on Jeepers engine needed to come off.  Have always liked a clean looking engine.  It was also a good day for getting the pressure water nozzle up & under the Big EEE's chassis to flush out all that corrosive road salt we had picked up on the last day of our homeward journey through Michigan 2 weeks ago.  Also hauled myself up onto the Motorhomes roof & hosed everything down up there as well, especially the solar panels. 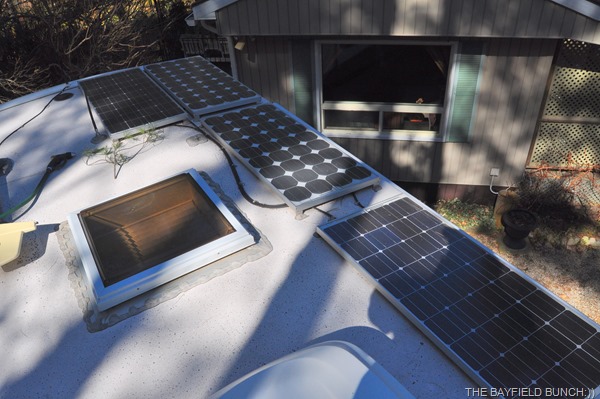 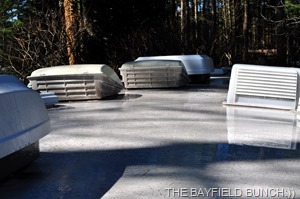 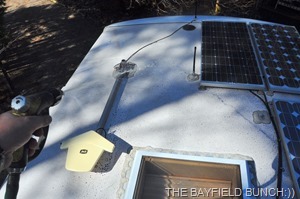 WE HAVE A BUSY ROOF ON THIS RIG 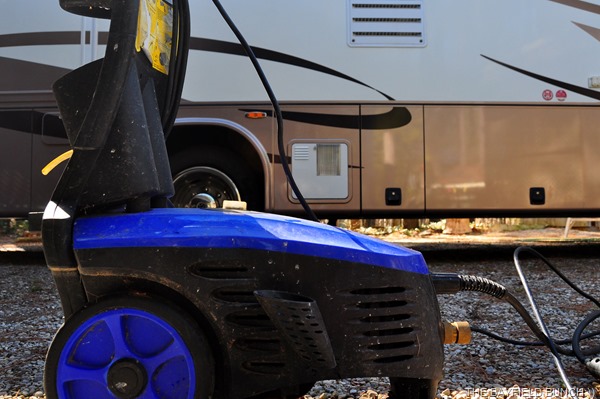 A couple Park employees cleaned up that mess of logs I had a picture of in my post a couple days ago & today I finished cleaning up after the clean-up.  Another utility trailer load for Pheebs & I to haul away.  It’s not a long Jeep ride for Pheebs but she loves getting in that Jeep even if it’s to just drive across the driveway.  Such a totally nice Spring day to be outside puttering away at stuff plus Pheebs & I took the rig for a wee spin as well.  Looking ahead at our 10 day weather forecast I see they are predicting the possibility of snow one day next week.  Hope it’s not Wednesday. 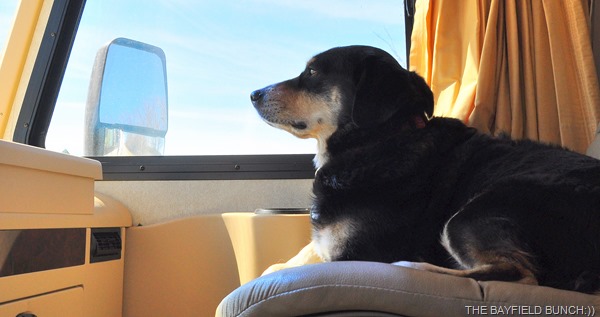 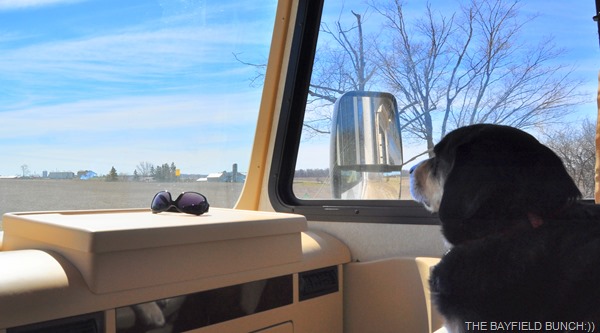 JUST CRUISING ALONG WATCHING THE SCENERY GO BY

I was a bit worried we might wake up this morning with ‘buyers remorse’ but it never happened & we are both happy about our decision Tuesday to buy the Jeep Liberty.  It was within our price range, the color we wanted, & we still end up with a Jeep.  Now here’s something we didn’t know about the color.  When Kelly initially phoned Voisin Motors enquiring about that Liberty for sale she mentioned to Ray on the other end of the line how much we liked the tan color.  His response to Kelly was, “you must be older folks.”  He said that light tan color is preferred by older people.  I don’t know what color younger people like but I can tell you the majority of vehicles we looked at on-line were either silver, black, or white with silver being number 1 it seems.  Our Santa Fe was silver which was Okay but we were really wanting something more along the lines of earth tones.  The tan color reminds us of the southwest deserts & the beige khaki interior is reminiscent of our southern Ontario forests.  A nice relaxing combo of colors:)) 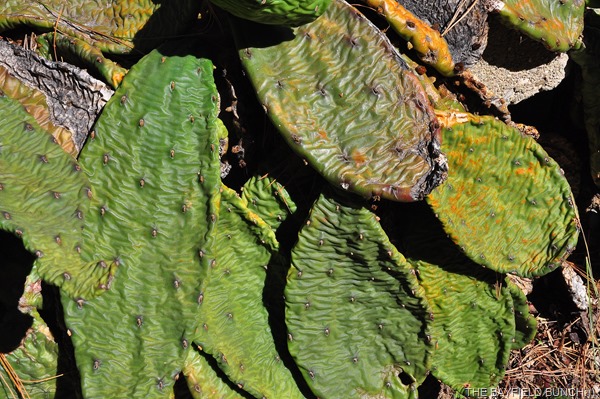 Ivan made it back to Alberta a few weeks ago & has already got himself well up in the world.  He’s a bit isolated in his lofty perch & with supplies already running out had to convince a passing fire patrol helicopter to drop off some additional supplies for him & little four footed & famously furry Hailey.  And no the Cougar foot prints in the snow were definitely not Haileys.  And how many people get to take photos of deer from above.  Now Ivan either has a really long ‘selfie stick’ or he has himself ensconced high atop something to look down on those deer walking by below.  In fact they even stopped for a rest & laid down without seeing him.  So how is all this possible you ask.  Better just click on Ivan’s name & see what he & Hailey are up to again for the summer.  Might want to ask him what a frozen shower bag looks or feels like………………………….. 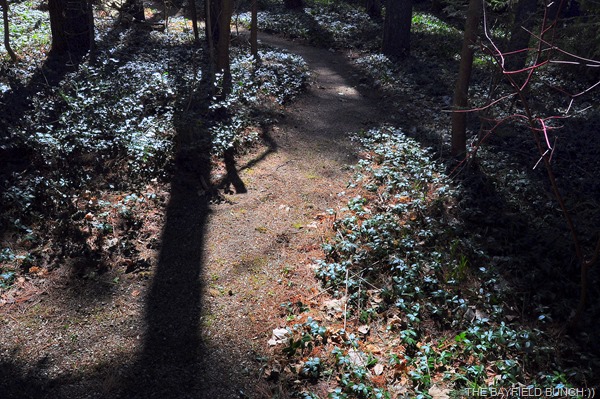 GROANER’S CORNER:(( Lucas was arrested for selling home-stilled whiskey. His lawyer put him on the stand and asked the jurors to look carefully at his client.  "Now, Ladies and Gentleman of the jury," concluded the lawyer, "you've looked carefully at the defendant. Can you sit there in the jury and honestly believe that if my client had ANY whiskey he would sell it?"  He was acquitted.

"Have you seen this morning's paper?"
"Yes, I wrapped the garbage in it."
"But I hadn't seen it yet!"
"You didn't miss much. Just some coffee grounds and a few orange peels."