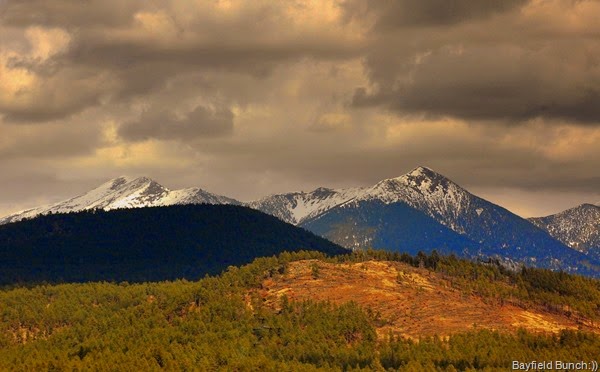 Now I think this Bellemont Camper World is a place Sam from somewhere over there near St. Louis would really like.  Just a few hundred yards south of our location is a double main line set of railroad tracks running east/west & I’m guessing there is close to a dozen heavy duty long freight trains going by every hour.  Five & six big engines pulling a ka-zillion freight cars & boy oh boy are they ever noisy.  Despite that we both slept well.  We were just too frazzled to sleep any other way.  Besides I took a sleeping pill & knocked myself out like totally silly.  Oh & our fridge is still working perfectly ‘of course’. 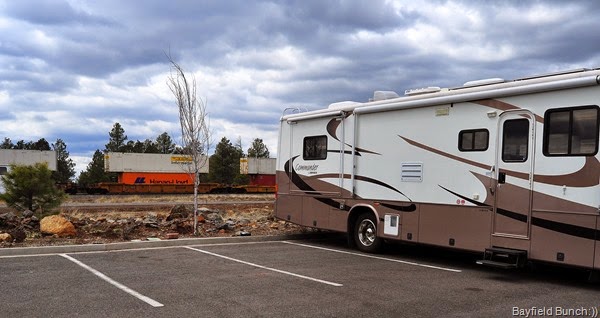 Pheebs & I were up early & out the door by 4:30 a.m.  No stars so knew we were under a heavy cloud cover.  A bit cold with a few small patches of dirty plowed snow in the corner of the parking lot.  No wind.  Over coffee later we discussed what to do with the loss of power in the coach when climbing hills.  We never had the problem on the way down this winter & the Chevy 8.1 always powered us up & over the mountains with little problem.  Except west of Kingman on our way to the Mojave National Preserve.  A sudden loss of power climbing a grade but then it was fine again.  We figure something somewhere is definitely amiss. 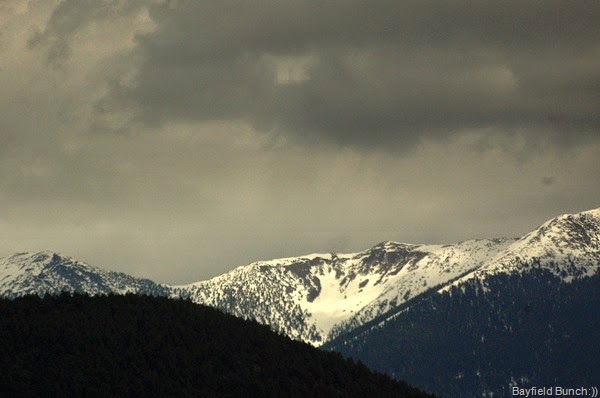 One of the positive aspects of writing a blog & being honest enough to post about problems with various things is the positive feedback in the form of advice, suggestions,  & know-how tips from readers.  Reader feed back gave us a good heads up about our fridge as well as the coaches power problem.  Taking the advice of readers & especially an email from John & Pat Matoon saying, “there is a metal gasket that connects the right exhaust manifold  to the tailpipe.  That gasket went bad and was leaking.  When you are putting a strain on the engine, like climbing a mountain, it leaks more.  There is a Oxygen Sensor close to this gasket and the leaking exhaust caused the sensor to tell the Computer that the engine was running too lean”……..We decided to go back to the truck place & see if they would have time to check that.  Also many readers mentioned having the fuel filter changed so we decided on that as well plus an oil change if they could fit us in. 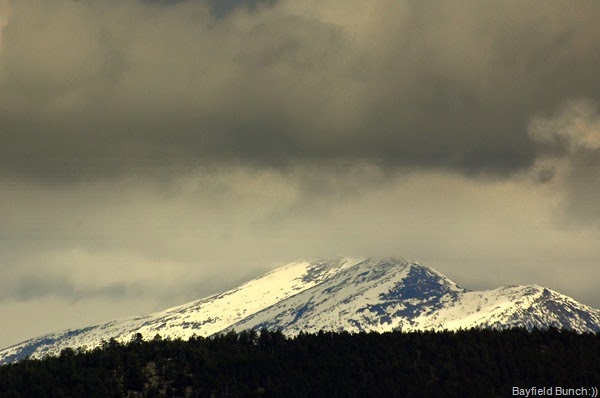 After breakfast at McDonalds about a mile from our location we were at Camping World’s service desk for our 9:45 appointment but rig didn’t get taken in for another couple hours.  A scheduling conflict.  Because the fridge is working right now we opted for a $79.95 full service whereupon the fridge is completely checked over & cleaned etc.  Blockages are also looked for.  We found the folks at the service counter very friendly & straight forward with regards to servicing the fridge.  Waiting room has internet, TV, & coffee.  Our rig was done just before noon & they said the flu needed blowing out & the igniter cap was off.  That was corrected & they think we may be alright now.  Writing this tonight our fridge is working perfect.  We have our fingers crossed.  No shenanigans, no tom foolery, & no trying to upsell us on anything by the store’s staff.  They did advise periodic servicing to avoid costly repairs.  I agree.  Two thumbs up for the Bellemont Arizona Camping World store at exit 185 on Interstate 40.  They even thanked us for being ‘nice customers’. 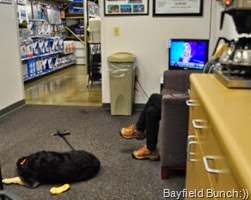 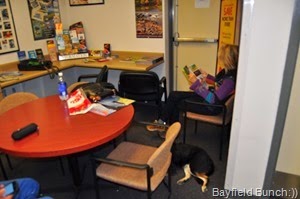 HANGING OUT IN THE CUSTOMER SERVICE LOUNGE FOR A COUPLE HOURS 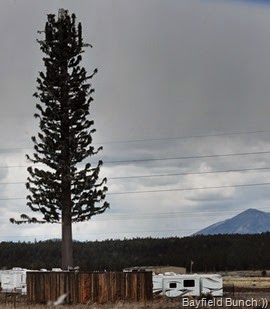 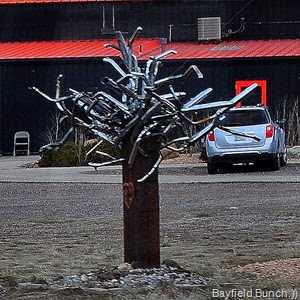 From Camping World we drove a short mile down the service road beside I-40 to the BELLEMONT TRUCK REPAIR CENTER again to see about getting the aforementioned things done.  This garage does service work for trucks in the area as well as towing.  We dug through the previous owner’s (Don) files & found the parts number for the correct Napa fuel filter & Bellemont had those filters in stock.  While waiting to get into the garage for service things really went south on us all of a sudden & it had to do with the rig again:((

While waiting an 18 wheeler ‘cab’ came down the road, slowed, & pulled in behind us.  I figured right away he was here to pick up one of the 2 trailers parked on either side & to the back of us.  And he was.  I jumped out of the rig & went back to ask him if he needed us to move the rig.  Said he did because he was after the trailer on our passenger side. (see photo below)  So no problem I jumped into the Big EEE’s driver seat, turned the key……………….nothing!!!!!!  Battery was stone dead.  Not even using the house batteries ‘power boost’ worked.  Stone dead.  Kept trying & trying.  Nothing & nothing.  Scurried back to tell the truck driver of my dilemma which of course now caused a dilemma for him.  Young fella & didn’t seem mad.  So far so good, well sorta.  I raced around & fired up the Jeep pulling it up in front of the rig.  Out with my jumper cables, hooked them up……..nothing.  Tried & tried & again nothing & nothing.  Truck driver was a little concerned but turned out to be a really nice guy about it all.  Next I went into the truck garage & explained my predicament to the lady at the desk.  She right away rounded up a mechanic guy & he came over with a truck & hooked his booster cables on.  Problem solved?? Nope!! Nothing…………That mechanic tried everything he knew but he could not even get the starter to turn over.   Truck driver was now at the point where he had to somehow get that trailer hooked up, out of there, & off to Flagstaff.  There was a narrow space between the trailer & some boulders at the edge of the gravel parking lot & he had no choice but to try to squeeze his cab through there to get in front of the trailer to back up & hook onto it.  I stood on the largest boulder & guided the passenger side of the truck past it but sure was a tight fit.  Couple minutes later he was in position, backed up & hooked onto his trailer.  From there I spotted for him as he backed the 53’ trailer of refrigerated goods out & onto the road.  A big smile, a hearty wave, & hi-ho Silver the big blue truck pulled out & headed east for I-40 & Flagstaff.  What a nice young fella that driver was & despite the problems we were having he & I had some hearty laughs kibitzing back & forth.  Although living in Phoenix now he was originally from Chicago.  For some reason I know I will always remember this brief encounter with that fellow.  Okay, back to our problem……………..

The mechanic (another really nice guy) spent a good 40 minutes trying this & trying that.  He was on his back under the engine 3 or 4 times.  I stood by the windshield & every time the mechanic would say “try it again” I would signal to Kelly in the drivers seat to hit the switch but nothing worked, just a couple clicks from the relay or starter or something.  Did I mention the cold wind with rain in the air at times.  Every wire he checked with his volt meter was fine.  Battery checked out to fine as well.  After crawling out from under the motorhome for about the 4th time he said he was going back into the garage to talk to another mechanic about the problem.  It was a good opportunity for me to hit the washroom & while in the washroom………the motorhome started up.  What!!!!  Kelly had tried the ignition switch again & sure enough the rig started right up like nobody’s business.  I made fast tracks for the garage to tell the mechanic & you can imagine how relieved he was.  Said while he was under the rig the last time he noticed one of the wires coming from the starter was touching the frame so he pulled that wire over away from the frame.  Could this be the source of our dead battery problem.  Remember this very same thing happened in Williston North Dakota early last October on our way south.  Despite it now being after 5 in the afternoon he said drive the rig around to the shop & he would do the oil change, fuel filter, & tape up that loose starter wire.  While he did this Kelly, Pheebs, & I headed the short distance to the Pilot truck stop & McDonalds/Subway complex.  Got us  big honking 12” sub & headed back to Bellemont Truck Service & waited in the Jeep eating the sub while the skies above rained on us.  Half an hour later our rig was ready to go.  Said there was some dirt in the old fuel filter but he’s seen worse.  Said they couldn’t do the Manifold gasket check because they do not have those gasket parts & said we would be better off to take the rig to a GM dealer for that.  At least this way if we have that loss of power again on the hills we’ll know it’s not the fuel filter.  Anyway I had better get out of here.  This post is already waaaaaaaaaaaaaay too long & I am waaaaaaaay too tired.  We’re going to head out in the morning for warmer sunnier weather.  That is if the rig will start & we are able to get over a few more mountains.  Thanks for all your positive support & helpful advice & ideas folks.   Certainly makes things a little less stressful………………….Over & out for tonight.  zzzzzzzzzzzzzzzzzzzzzzzzzzzzzzzz  Oh ya, we’re overnighting here at the truck garage in the same spot we were parked earlier today.  And 2 big thumbs up for the Bellemont Truck Repair place at exit 185 on I-40 between Williams & Flagstaff Arizona:)) 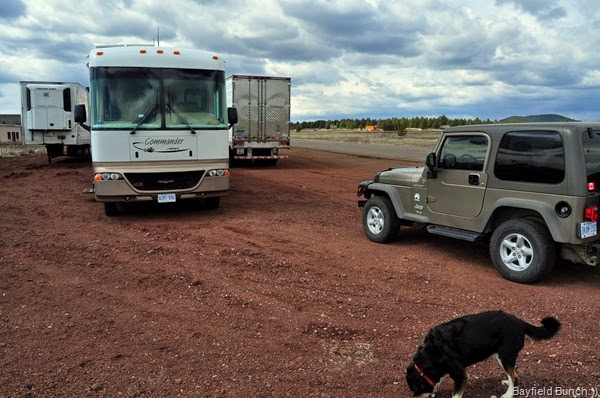 PARKED AT THE BELLEMONT TRUCK CENTER WAITING TO GET IN 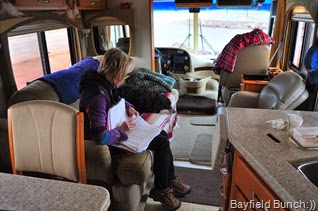 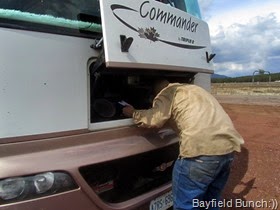 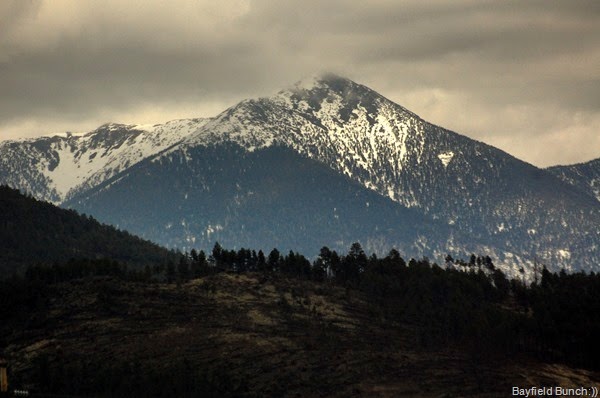 GROANER’S CORNER:((  It had been snowing for hours when an announcement came over the intercom: "Will the students who are parked on University Drive please move their cars so that we may begin plowing."  Twenty minutes later there was another announcement: "Will the twelve hundred students who went to move 26 cars please return to class."