THIS POST IS COMING TO YOU FROM THE CIBOLA NATIONAL WILDLIFE REFUGE SOUTH OF BLYTH CALIFORNIA:))

OUR MOJAVE SUNRISE THIS MORNING
Stretching across our desert night sky I am always enthralled with how brilliantly clear earth’s Milky Way appears with it’s myriad of stars & star clusters.  Earth & we Earthlings are located on the Orion Arm of an immense 2 armed spiral galaxy & it is through this one very arm we peer outward & beyond into our Universe.  Here in Mojave’s cool steady night air it is that beyond which seems to appear ever closer. 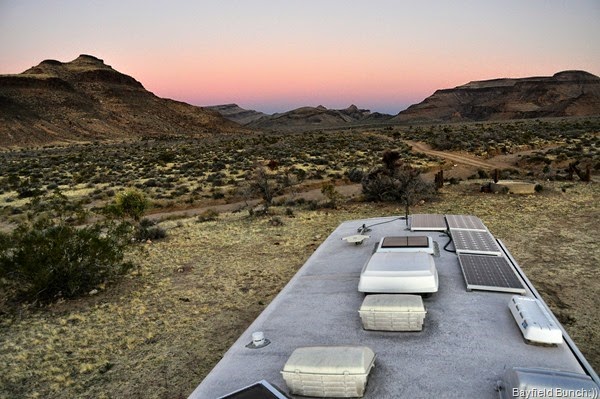 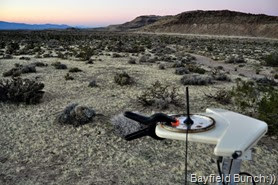 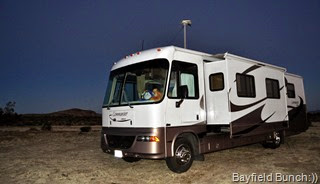 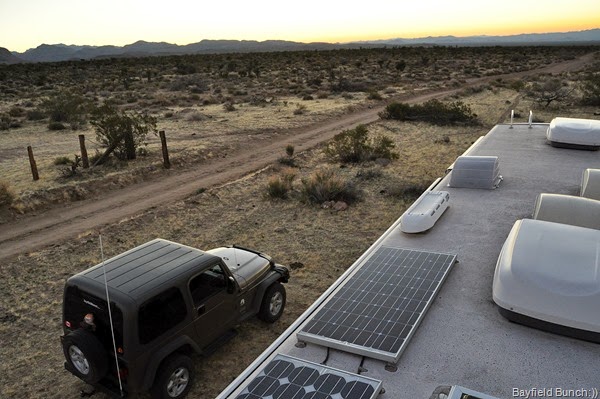 With body clocks still on Arizona time we were again up before 5.  How nice to turn on our laptops & have internet right there waiting for us.  Great connection out here….if your in the exact right spot that is. 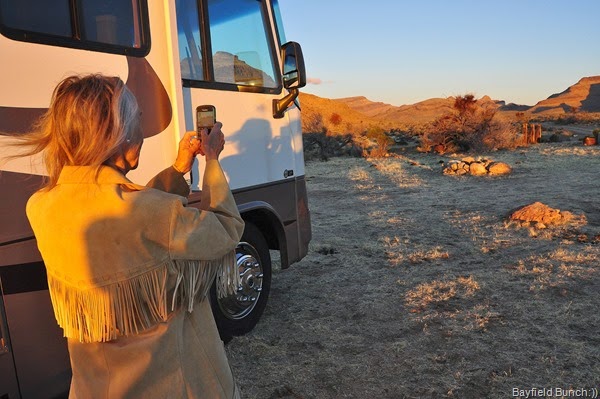 KELLY TAKES A BLACKBERRY PHOTO OF OUR BEAUTIFUL MOJAVE MORNING 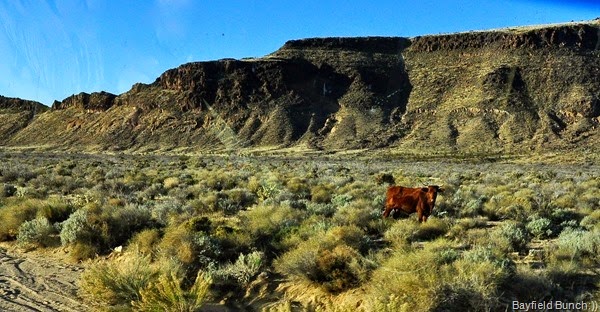 THIS COW WAVED GOOD-BYE TO US AS WE ROLLED BY HEADING SOUTH DOWN ESSEX ROAD
Didn’t take us long to get things stowed away & grab a quick morning walk.  Felt a little sad leaving this spot in the Mojave but by 6:50 we had the big wheels rolling on another beautiful morning.  Only a short half mile up to ‘Hole In The Wall’ where we dumped our tanks & took on fresh water.  It was 7:30 when we pointed Big EEE’s nose south on Essex Road & rolled on out of California’s Mojave National Preserve.  Picked up Interstate-40 & headed east.  Very light traffic as we lumbered our way up to & over Mountain Springs summit tumbling our way back down the other side all the way to Needles.  Hung a right turn onto highway 95 heading straight south for Blyth.

FIRST GLIMPSE OF THE COLORADO RIVER

OH & I JUST WANT TO GO OUT THERE & ROLL AROUND IN ALL THAT GREEN GRASS
Highway 95 running from Needles to Blyth is a nice stretch of road running very straight for long distances on smooth pavement.  Mountain ranges on either side with lots of easy rolling & fun ‘whoop-de-doos’ along the way.   I’m thinking this is the road we took from Parker to Blyth several years ago when we picked up our Class C Sunseeker in Parker.  Closer to Blyth the Colorado River begins making appearances on the left side of the highway.  Rolled into Blyth around 10 stopping for some groceries at ‘Smart & Final Extra.  Weird name for a grocery store but we liked it anyway. 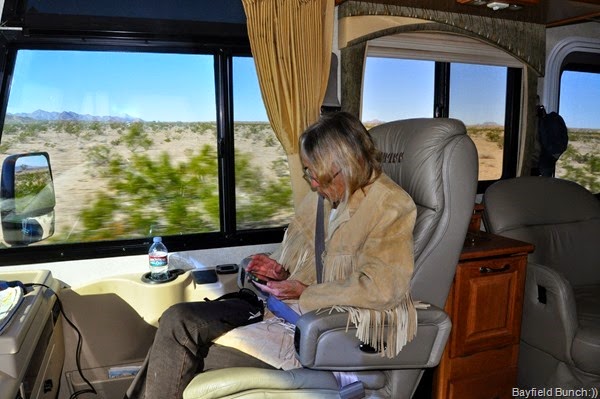 KELLY CHECKS HER BLACKBERRY MAIL
Usually we are on I-10 passing through Blyth on trips to Borrego Springs or Niland & it had been a few years since we had actually been in downtown Blyth itself.  When we stopped at the grocery store it was nice to see palm trees & hear birds singing.  There ‘s some nice southwest architecture here as well. 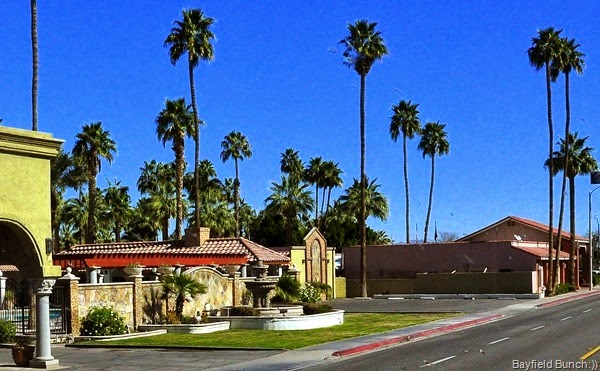 HAD THIS PLANE NOT PULLED UP WHEN HE DID I THOUGHT HE WAS GOING TO LAND RIGHT ON I-10 IN FRONT OF US…TURNS OUT IT WAS A CROP DUSTER
We remembered where McDonald’s was so it was a quick stop for a travel coffee & we were on our way again.  West out of Blyth for a short few miles & we exited onto highway 78 south.  This is an old familiar route for us  heading for Brawley, Niland, & Borrego Springs.  We knew right where the Cibola National Wildlife Refuge turn off from highway 78 was…..but we didn’t know exactly where to go from there.  A few dusty gravel roads, a stop at the Oxbow Recreation Area for some directions, a narrow one lane wooden bridge over the Colorado River & a drive through the sleepily dusty little community of Cibola with a right turn at a stop sign & down a paved road a bit where sure enough we found ourselves at the Wildlife Refuge Visitor’s Center it’s very self.  Wow that was quite a sentence to get through. 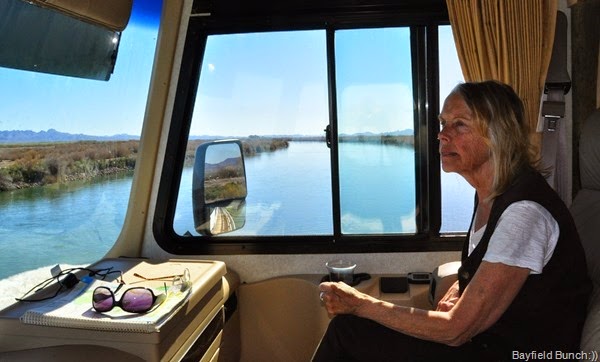 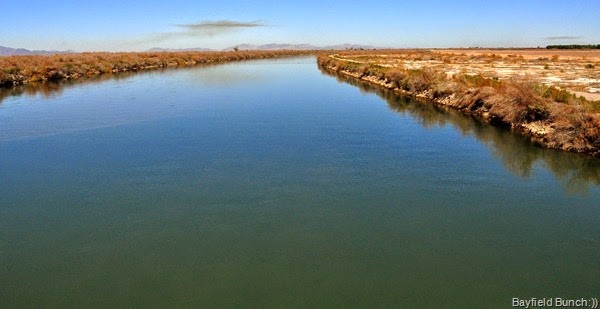 Lady inside was very friendly with lots of information for us.  Explained the area on a map showing us where BLM lands were. (across the road from the refuge)  Said a lot of this area’s birds have already left on their migratory routes north.  She’s thinking this unusually warm weather has prematurely triggered their flight plans.  Oh, & mentioning weather…..how does 86F today sound.  In fact our wall thermometer in the rig said 91F at 5 this afternoon Arizona time.  Hotter than the hobbs of Hades in the sun but oh how refreshingly cool in the shade.  Matter of fact that is where I am typing this from right now sitting on the north side of our RV with a wonderful cooling breeze fanning over me.  We did find us a nice boondocking spot & looks like we are the only one’s here unless we missed the spot where all or most Dockers go.  If we did that’s perfectly OK with us:))

DRIVING THROUGH THE COMMUNITY OF CIBOLA
Our plan is to Jeep around tomorrow morning & scout out this whole place getting a lay of the land for future boondocking travels.  It’s an area we have been by numerous times on our way from point A to point B but had never taken the time to stop in & have a look around.  Wasn’t until we read some of Nina’s posts (Wheeling It) that we decided we had just better come have a look for ourselves.  It is not far off the path on our route home to Congress either.   Anyway, we like what we have seen so far & anywhere out here in the vast deserts of the southwest having bodies of water is always a huge bonus.  And oh how we are loving the acres & acres of green irrigated fields along the Colorado River.  Just makes me want to pull over & go roll around in all that gently waving emerald green grass.  And how nice to see some sizeable trees again.  We Northerners sure do miss our big green trees.  Well I sure do anyway. 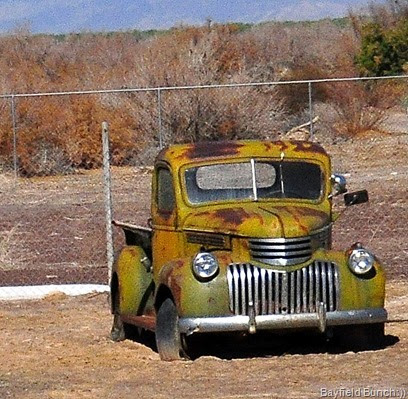 SEEN IN THE DUSTY LITTLE COMMUNITY OF CIBOLA
And while I’m thinking about it I just once again would like to throw out a great big thank-you to all our blog readers.  Whether you have emailed us, Twittered, Shouted, Facebooked or just plain commented on our blog I just want to say how much your thoughts are always appreciated here at the Bayfield Bunch…………. 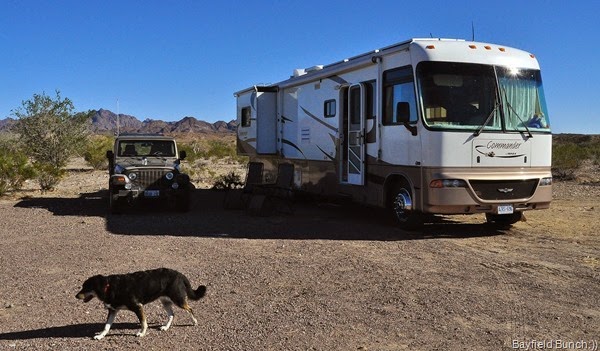 OUR CIBOLA BOONDOCKING SPOT
Now ‘ED’……a little correction for you.  In your last comment on my post you wrote, “It is too bad that you could not get the gas you needed out of the EEE tanks. It would have saved some money and the extra driving that you had to do so you could buy expensive California gas. Baker, CA prices are always high but nothing like Needles, CA. Then about 20 miles from Needles in Arizona Love's Travel Stop is $1/gallon cheaper”………..  Ed, we did fill up the Motorhome, Jeep & 5 gallon gas can at that very Love’s gas station east of Kingman last Tuesday (I may have mis-identified it as a Pilot station) & we at no time ever purchased any gas in California for the 6 days we were there.  Not a drop!!  We’ll pick up a bit of gas for the rig in Quartzsite on the way home in a couple days & that’s it……….Imagine that, me correcting Ed for a change instead of Ed having to correct me.  Groovy:)) 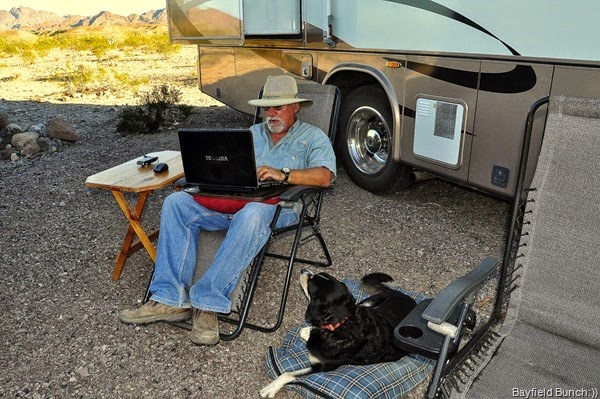 HAPPILY WORKING AWAY AT PUTTING TONIGHT’S POST TOGETHER:))
Just gotta say again how nice this past week for us has been.  Such a nice break from our Congress routines to get on the road seeing & doing new things.  I so much enjoy going places we have never been & seeing things we have never seen & in a few days we’ll be looking forward to heading back to Congress again where we will probably stay until we begin our long trek back home to Bayfield Ontario later next month.  And yes we’re even looking forward to getting ourselves back home there as well.  It is this great freedom of diversity that works so well for me.  Always having travel plans to look forward to is the key for me in avoiding same old-same old boring routine days, weeks, & months at a time.  Not everybody’s cup of tea of course but with a restless soul like mine I’ll ask you to simply put that old travelling teapot on the stove & just let it steep forever……….:)) 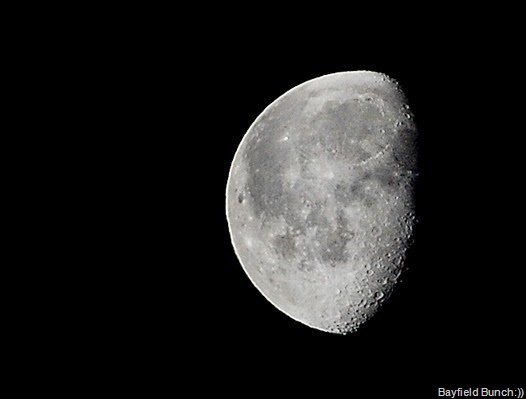 THIS MORNINGS EARLY MOJAVE MOON
GROANER’S CORNER:))  Bill and Sarah were Londoners and were blessed with seven healthy children. After many months of discussion, they finally decided to move to New York. It should have been a simple enough move, but when they arrived, they had great difficulty finding a suitable apartment to live in.  Although many were big enough, the landlords always seemed to object to such a large family living there. If only Bill wasn't so honest about the size of his family!  After several days of unsuccessful searching, Bill had an idea. He told Sarah to take the four younger children to visit the local cemetery while he went with the older three children to find an apartment. After looking for most of the morning, Bill found a place that was ideal.  The landlord asked him, "How many children do you have?"  Bill answered with a deep sigh, "Seven .. but four are with their dear mother in the cemetery."  He got the apartment!
Posted by Al Bossence at 2/09/2015