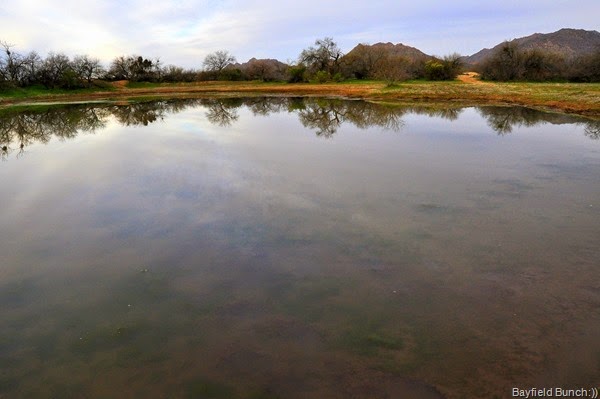 WATER IN THE DESERT ABOUT A MILE BEHIND OUR HOUSE
I lost interest in our neighborhood morning walks months ago so have given them up but when Kelly suggested a morning desert walk I was all for that & off we went.  Behind a growing cloud cover old Sol barely cleared Wickenburg’s Mountains before we had the Jeep parked alongside the road & were off through a small gate into the desert near our house.  For me it is far more interesting than walking the same paved neighborhood streets day after day.  I much prefer the quiet gentleness of the desert for walking. 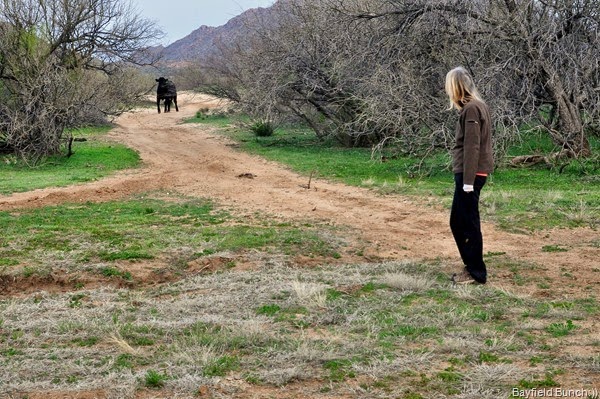 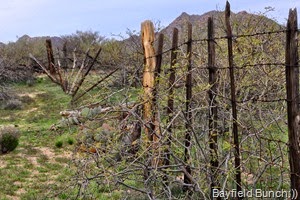 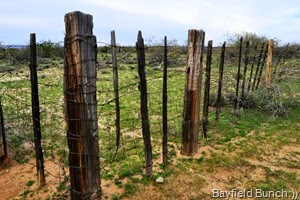 CAME ACROSS THIS OLD CATTLE PEN 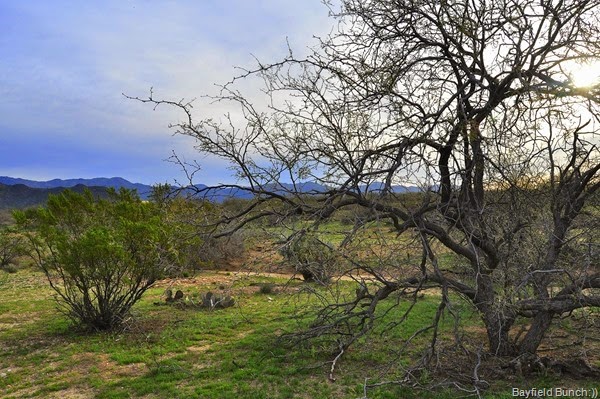 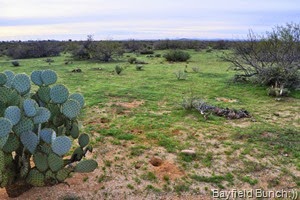 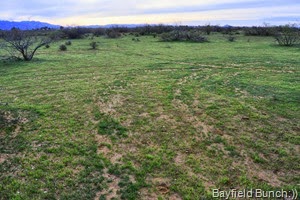 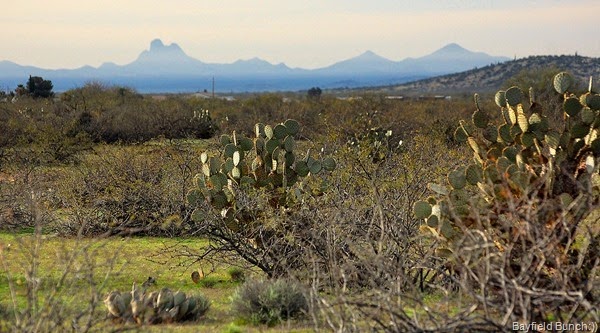 WICKENBURG’S VULTURE PEAK IN THE BACKGROUND

I have been missing it but just tonight I came across a couple fellas doing a major overhaul on a 27’ 2001 Lazy Daze Class C RV.  Looks like they began back about the beginning of February & are nearly finished.  This will be of particular interest to Lazy Daze owners & any handy do-it-yourselfers out here.  Of course I’m talking about Sharon & Bill’s Lazy Daze rig over at The Odd Essay.  I have gone through Sharon’s posts & picked out the renovation ones & have numbered them from 1 to 5.  Renovation Post 1, Renovation Post 2, Renovation Post 3, Renovation Post 4, Renovation Post 5.  In Post 5 with the repairs 99.9% complete Sharon lays out a detailed list of costs for all the materials used in the renovation.  Oh how nice it must be to be so handy & have the know-how & patience for these kinds of projects.  Good stuff guys. 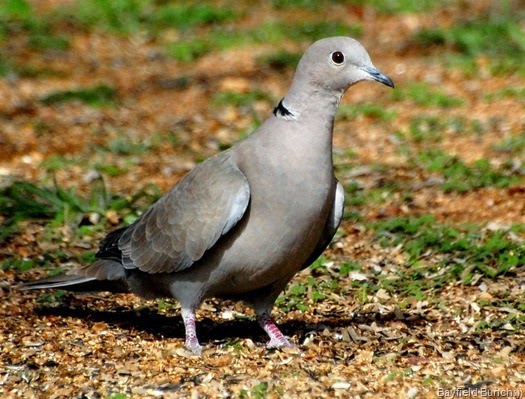 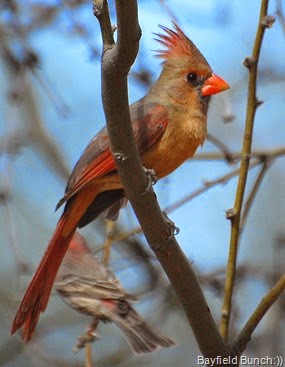 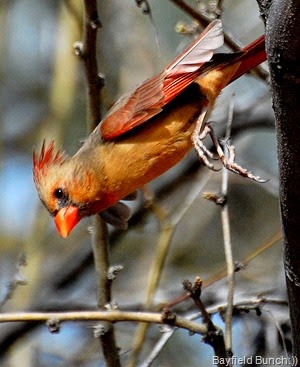 FEMALE CARDINAL PERCHED & DOING A SWAN DIVE TO THE BIRD FEEDER
I remember when Kelly & I first began our RV travels how confusing the technical end of most everything was for us.  Still is:((  We learned how to deal with mechanical things like emptying gray & black tanks, moving slides in & out, hot water heaters, propane operated fridges & stoves, roof vents, filling our water tank, etc. etc. but it was the technical side of things that has always remained confusing to us.  Well to me anyway.  We had one laptop between us & the first season on the road relied on unreliable wifi spots if & when we could find them.  We did have a cell phone but this was back in 06/07 & the whole cell phone thing as I recall was confusing as well.  I have made zero progress since then in understanding cell phone technology.   In our 2nd season out we went with an expensive satellite system for both our TV & Internet but this was again hugely confusing for us as well & was fraught with many frustrating problems with the last one in City Of Rocks State Park in New Mexico when the system just died.   We had had enough & decided right there & then to just leave it dead & abandoned the whole satellite idea in less than a year.  Verizon air cards were becoming very popular so we immediately made the leap to that technology & never looked back.  Since then the techno world has evolved so fast we have been left hopelessly in the dust.  Well I’ve been left in the dust that is.  If it wasn’t for Kelly I’d still be using carrier pigeons.  I guess what I’m getting at is so many things are changing so fast it is hard for many RV’ers to stay current with everything.  However, there is hope.  Thanks to a younger generation of RV folks on the road these days there are people continuously on top of all these mobile technical changes & it is some of these RV’ers who devote a lot of their time & energy into sharing their knowledge & technical expertise with their fellow travelers.  Two of these tech savvy RV’ers are Chris & Cherie from technomadia.  Be sure to check out their RV Mobile Internet Resource Center plus they have just re-freshed their latest 2015 edition of The Mobile Internet Handbook.  We met Chris & Cherie a couple months ago in Borrego Springs California.  Nice folks for sure.  I truly don’t understand what it is they technically do but then again I don’t understand why my favorite rotary phone doesn’t work anymore either…………….. 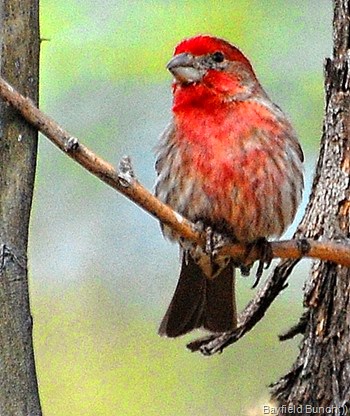 Have had a few inquiries about my Breezer hat & should mention the hat cost $35.  I imagine they can be bought at most State Parks with each State Park having their own logo on the hat band.  Because I bought mine in the Mojave National Preserve that is what it says on the front of the hat.  I imagine places like Joshua Tree would have the same hats for sale. 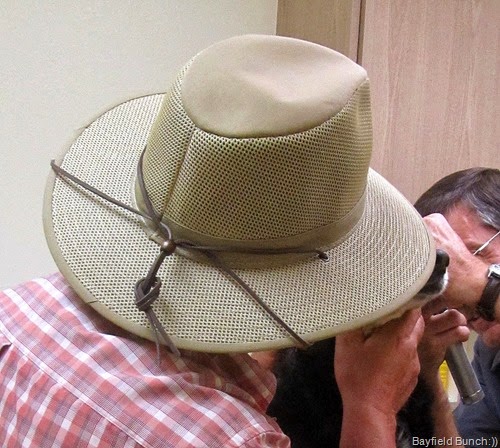 THE SOLID TOP BLOCKS THE SUN’S RAYS WHILE THE MESH SIDES & BRIM ALLOW AIR FLOW…CORD ON THE BACK OF THE HAT CAN BE USED AS A CHIN STRAP ON WINDY DAYS…I REALLY LIKE THIS HAT, VERY COMFORTABLE, LIGHT, & AIRY 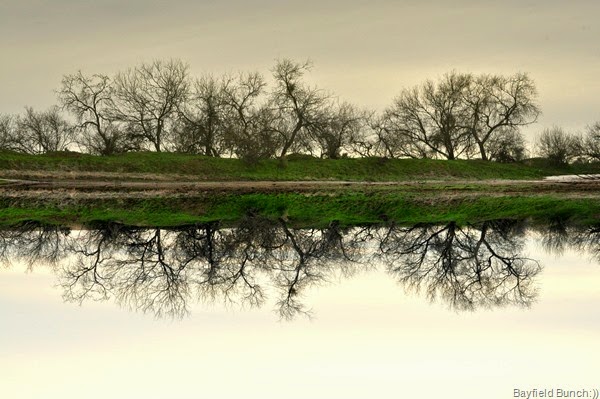 DOES ANYONE NOTICE ANYTHING ODD ABOUT THIS PHOTO??
GROANER’S CORNER:(( It is reported that the following edition of the Book of Genesis was discovered in the Dead Sea Scrolls.
And Adam said, "Lord, when I was in the garden, you walked with me everyday. Now I do not see You anymore. I am lonesome here and it is difficult for me to remember how much You love me."
And God said, "I will create a companion for you that will be with you forever and who will be a reflection of My love for you, so that you will know I love you, even when you cannot see Me.
Regardless of how selfish and childish and unlovable you may be, this new companion will accept you as you are and will love you as I do, in spite of yourself."
And God created a new animal to be a companion for Adam. And it was a good animal. And God was pleased.
And the new animal was pleased to be with Adam and he wagged his tail. And Adam said, "But Lord, I have already named all the animals in the Kingdom and all the good names are taken and I cannot think of a name for this new animal."
And God said, "Because I have created this new animal to be a reflection of My love for you, his name will be a reflection of My own name, and you will call him DOG."
And Dog lived with Adam and was a companion to him and loved him. And Adam was comforted. And God was pleased. And Dog was content and wagged his tail.
After a while, it came to pass that Adam's guardian angel came to the Lord and said, "Lord, Adam has become filled with pride. He struts and preens like a peacock and he believes he is worthy of adoration. Dog has indeed taught him that he is loved, but no one has taught him humility."
And the Lord said, "I will create for him a companion who will be with him forever and who will see him as he is. The companion will remind him of his limitations, so he will know that he is not worthy of adoration."
And God created CAT to be a companion to Adam. And Cat would not obey Adam.
And when Adam gazed into Cat's eyes, he was reminded that he was not the supreme being. And Adam learned humility.
And God was pleased. And Adam was greatly improved.
And Cat did not care one way or the other.
Posted by Al Bossence at 2/20/2015