AN UNSUCCESSFUL CELL PHONE SEARCH IN THE MOJAVE DESERT

MORNING DESERT WALKS ARE JUST THE BEST
Our days have turned out much warmer than anticipated so this morning we turned our rig around with Big EEE’s side door facing cooler north.  Usually at this time of year we would face our side door south for extra warmth.  Yes we could have used the awning but it’s much less of a hassle to just turn the rig around.  From my dining room computer spot I can now look out through our passenger side windows & see a few faint outlines of RV’s about a mile away to the northwest at ‘Hole In The Wall’ campground. 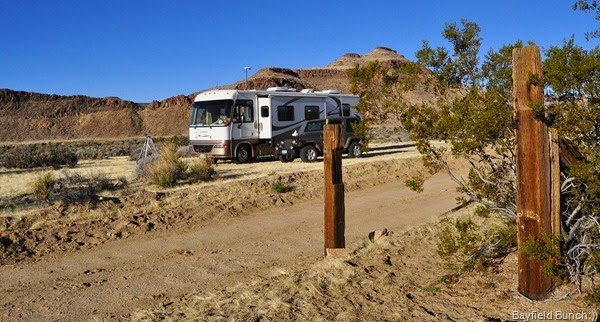 TWENTY MINUTES AFTER THIS PHOTO WE TURNED THE RIG AROUND & FACED IT THE OTHER DAY
We rolled into Doug & Yuma's camp around 8:50 a.m. & within minutes we had both Jeeps rolling through the desert to a spot about half a mile west of Doug’s rig.  It was here we saddled up our feet & spanned out in search of Doug’s lost cell phone.  One maybe doesn’t notice how vast this land is until one is looking for a tiny lost object like a cell phone.  Kelly had our phone along & with Doug’s Son trying to dial the lost phone from somewhere east of the Mississippi we tried to get it to ring.  Every so often we would stop & listen.  Only thing I heard was the sound of a light breeze & birds.  Hey, hope Doug didn’t download a ‘birds’ ringtone.  We climbed down into rocky ravines & washes trying to re-trace Doug’s invisible footprints Friday morning.  Just about every square foot of desert terrain we were in this morning looked just about the same as the last square foot of ground we had just walked over.  At one point we were so spread out we couldn’t even see each other through or over the countless Creosote bushes & Mojave Yuccas.  After about an hour we all independently realized finding this proverbial needle in a haystack was not likely going to happen & began making our way back.  Good thing Doug had a bright orange flag strapped to a tall aerial on his Jeep or the Jeeps might have been hard to locate.  Pheebs & I were first back & I wiggled the flagged aerial to make it even more visible to Kelly & Doug who were out in the scrub making their way back.  I could see them coming from different directions & 5 minutes later Kelly wandered in followed by Doug another 5 minutes later.  Nobody had found anything.  Jeeped ourselves back to Doug’s boondocking spot & gave him a hand to get his side awning down.  From there Kelly & I headed back to our rig.  We had had our exercise for the day. 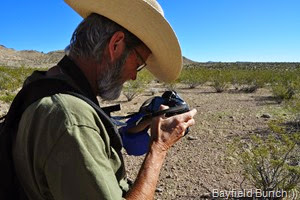 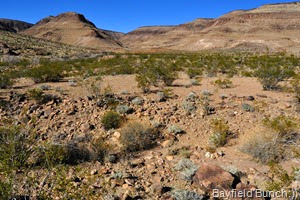 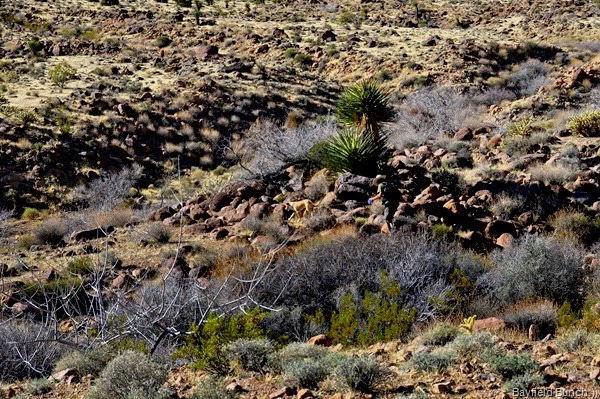 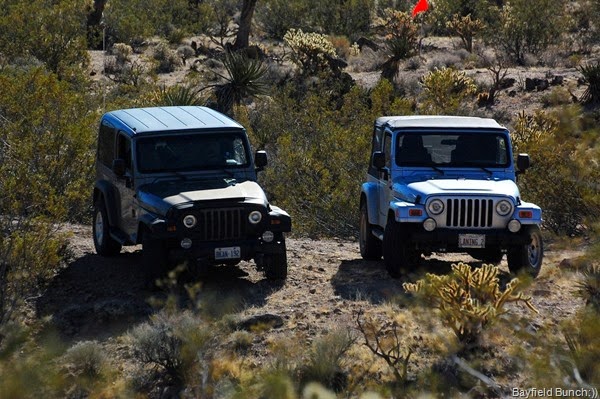 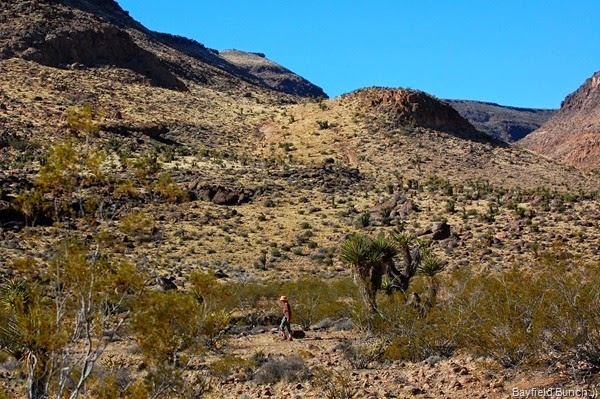 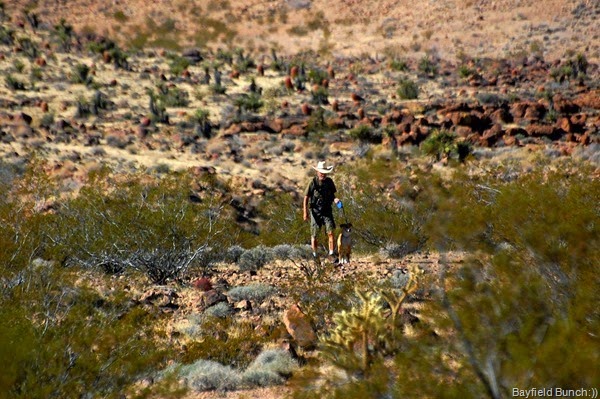 DOUG’S CAMP ABOVE WITH DOUG HIMSELF BELOW 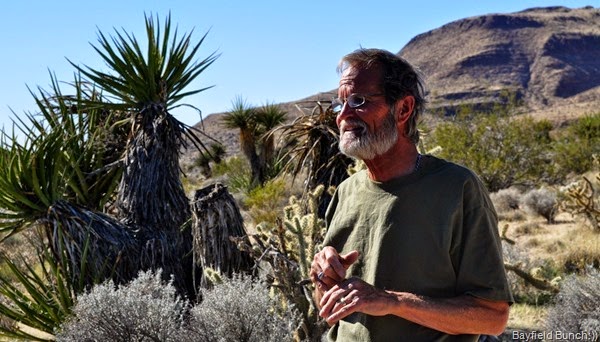 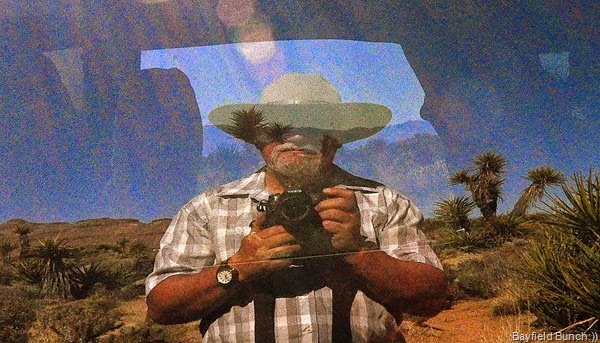 A JEEP WINDOW REFLECTION SELFIE:))
A lazy afternoon with a short drive to ‘Hole In The Wall’ campground to refill some water jugs & stop at the Information Center.  Ranger inside said they are open every day now from 9 to 5.  Other than trips for food or gasoline a person could boondock out here indefinitely.  Water at the campground is free as is the dump station & garbage bins.  Boondockers are encouraged to use the free facilities.  Not a lot of boondocking spots though but we do know of 4.  Doug is in one, we are in another, & the other 2 are empty at the moment.  One of those sites (my fav) is big enough for a 40’ diesel banger with a reasonably good short quarter mile road leading to if off Black Canyon road just south of ‘Hole In The Wall’ campground.

VISITOR’S CENTER AT ‘HOLE IN THE WALL’ 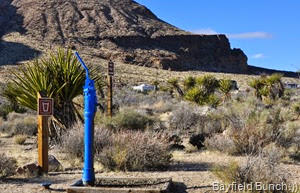 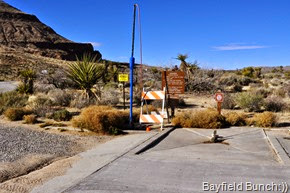 FRESH WATER AT ANY BLUE TAP & A NICE DUMP FACILITY 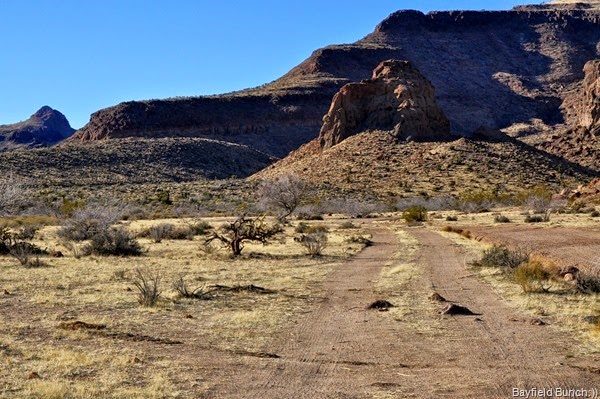 NEXT TIME HERE THIS WOULD BE OUR CHOICE OF 4 BOONDOCKING SPOTS…SAME PLACE I HAD A PHOTO OF 2 DAYS AGO WITH KELLY CHECKING FOR INTERNET & PHEEBS LYING IN THE FOREGROUND AT RIGHT
Doug & Yuma came over this afternoon for a few minutes with an awning question & to say he’s heading out in the morning.  Said he did take one last look for his lost Verizon Turbo phone but came up empty handed.  Luckily Doug had insurance on it & plans to head on down Indio way to a Verizon store & pick up a replacement.  He’s not sure of his upcoming travel plans but we told him if he’s up our way in Congress for him & Yuma to drop in.  Pheebs & Yuma were sure racing around again today.  They just get along so well those two little Monkeys. 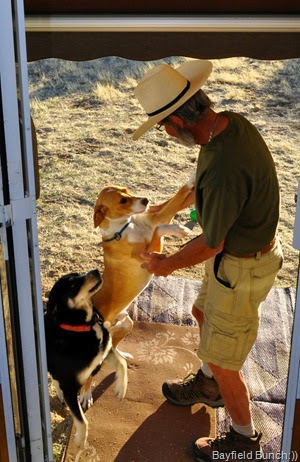 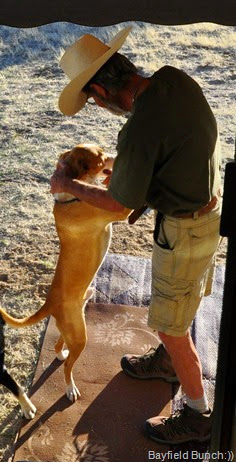 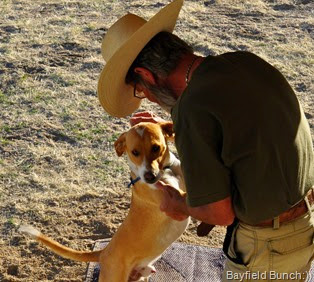 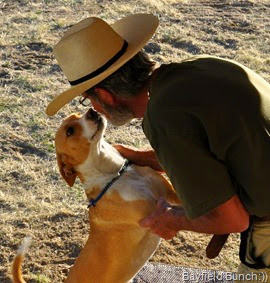 With our very spotty (but speedy) internet connection I am way behind on reading blogs or even leaving an occasional comment here or there.  Have not been able to publish my own posts at night due to no signal strength.  Early morning seems best so that is the time I’m able to insert links, etc.  Then it’s back to a spotty connection all day again as we repeat the cycle.  Very frustrating for a daily Blogger!! 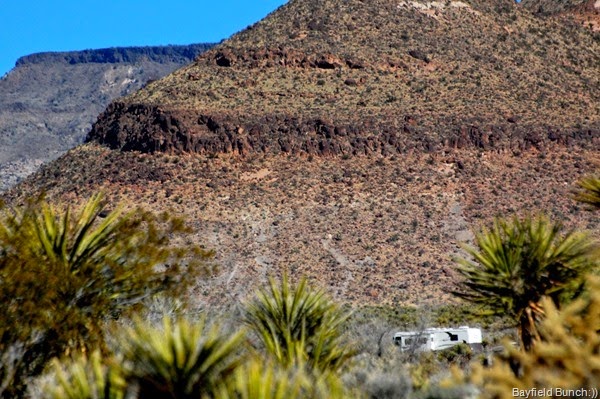 THIS IS WHAT OUR HOUSE LOOKS LIKE FROM DOUG’S HOUSE & AGAIN KEEP IN MIND THIS IS A 300mm TELEPHOTO LENS SHOT SO WE’RE REALLY MUCH FARTHER AWAY THAN WHAT THIS APPEARS
I think all RV’ers have had their days of trials & tribulations, ups & down, & those days when whatever can go wrong will go wrong.  Words like frustration & impatience can kinda go hand in hand with the RV lifestyle sometimes.  But how about if it was your very first day RVing.  Waited sooooo long for that special moment when you pick up your very first rig & hit that big wide open road to adventure.  Well, that’s not quite how it all began for the folks over at On The Road Abode.  And by golly they even got themselves tangled up in some cuss words too.  And keeping with the thoughts of a first time RV purchase & that wonderful day when one picks up their new rig without ever having driven one before & heads out for the first time, Arlon over at Travel Blog By Arlon Boozer can tell you about……scratches!!!!

ABOVE FAVORED BOONDOCK SITE IS LOCATED BELOW CENTER WHERE A TOUCH OF SUNLIGHT TOUCHES A TALL ROCK
I sit here this afternoon at my keyboard with sunlight streaming through open windows as a cooling breeze gently plays with our day-night shades.  ‘Sons Of The Pioneers’ on my laptop, Pheebs stretched out asleep by my chair & Kelly relaxing with her book.  Every window I look out I see mountains.  Oh how I am going to miss those mountains when it is once again time for us to begin our long trek homeward again next month.  Oh how I am going to miss my mountains & deserts along with the freer lifestyle we so much enjoy here in the great American South-West each & every winter……………………

TONIGHT’S SUNSET
GROANER’S CORNER:(( A woman walks into the optometry store to return a pair of eyeglasses she had purchased the week before.  "What seems to be the problem, ma'am?" the optometrist inquired.  "Well, I bought these glasses for my husband last week and they're just not working," the woman complained.
"Perhaps the lab made an error in filling the prescription."
"I'm sure they must have," the woman confirmed. "My husband's still not seeing things my way."
---
Aoccdrnig to rscheearch at an Elingsh uinervtisy, it deosn't mttaer in what oredr the ltteers in a wrod are, the olny iprmoetnt tihng is taht frist and lsat ltteer is at the rghit pclae. The rset can be a toatl mses and you can sitll raed it wouthit porbelm. Tihs is bcuseae we do not raed ervey lteter by it slef but the wrod as a wlohe.
Posted by Al Bossence at 2/07/2015