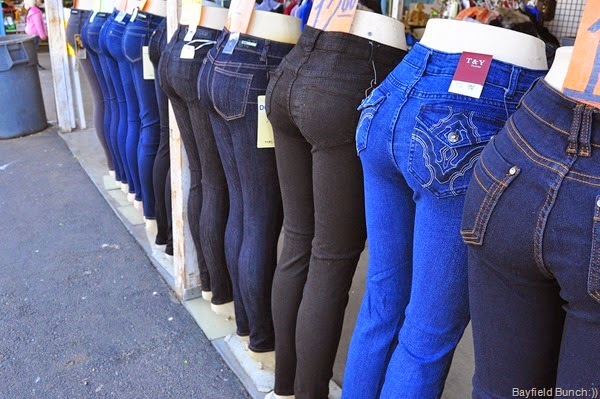 NOPE NOT THE REAL McCOY……JUST BOTTOM HALF MANNEQUINS

Kelly had it on her mind for us to head off into Yuma this morning.  Couple Flea Market/Swap Meet places to go plus a Walmart stop.  With Pheebs staying home holding the fort Kelly & I headed off into the southwest Arizona city just a short 20 minute easy drive away. 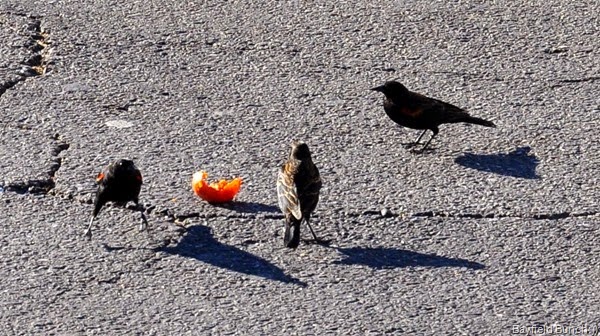 Yuma is an easy city to get around in.  Interstate 8 runs right through it easy as pie.  We’ve never had any problems finding our way around & this morning was no exception.  We had punched the Mexican Swap Meet location into our Garmin Gertie GPS & she led us right to it.  Now keep in mind here this is just my opinion which follows but we did not care for the old Yuma Mexican Flea Market at the Fairgrounds.  Just not our kind of merchandise there.  Many food vendors & fresh vegetable stalls along with reams & reams of Mexican clothing booths.  A lot of ticky tacky trinkety kind of stuff with much of it being repetitive.  Yes it’s a festive atmosphere alright with about every 4th booth ‘booooooming’ out that Mexican oompa-oompa accordion & horns kinda music.  Fine if you don’t mind being accosted by that kind of noise but it’s just not my cup of tea.  We just kinda walked through it quickly & the only thing we saw which remotely interested us was something we actually ended up buying.  Two hot dogs & boy did I make a mess out of myself with all the toppings on my big dog.  By the time I was finished I looked like I had been dive bombed by a whole herd of Gringo birds carrying payloads of ‘Montezuma’s Revenge.’  Told Kelly I’d probably need a garden hose to clean myself up.  We should have sat down at a table to eat our hot dogs but the tables were in the shade & it was still cold enough for me to see my breath so we stood in a sunny area to keep the sun on us.  I think we were back to the Jeep & out of there in less than half an hour. 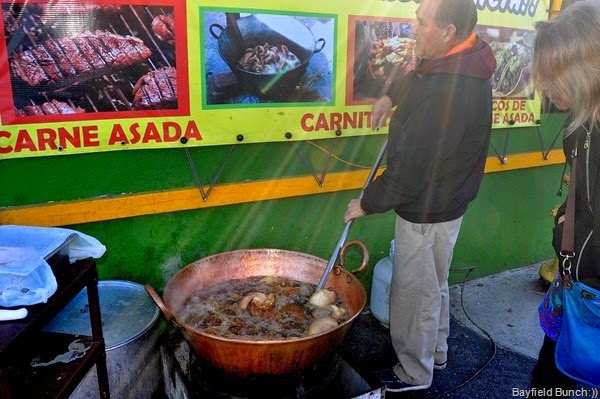 KELLY ASKED THIS GUY WHAT HE WAS STIRRING UP & HE SAID IT WAS PORK MEAT & PORK STOMACH…IT’S NO WONDER I DO NOT CARE FOR MEXICAN FOOD!!!! 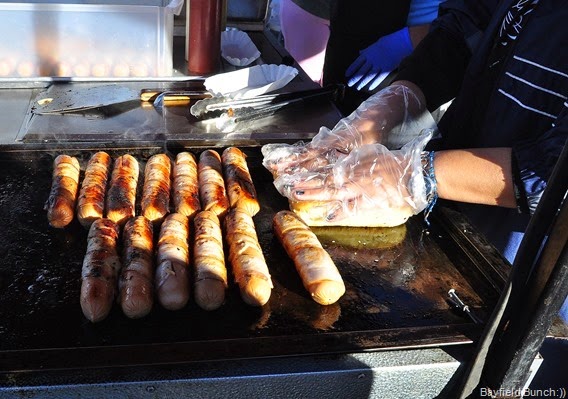 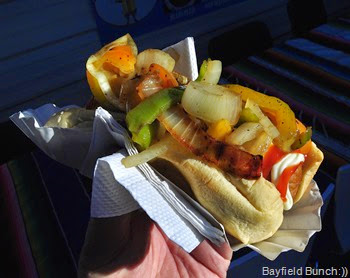 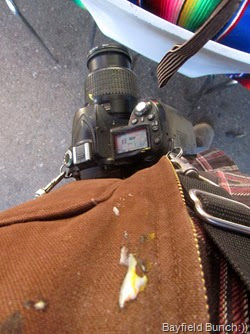 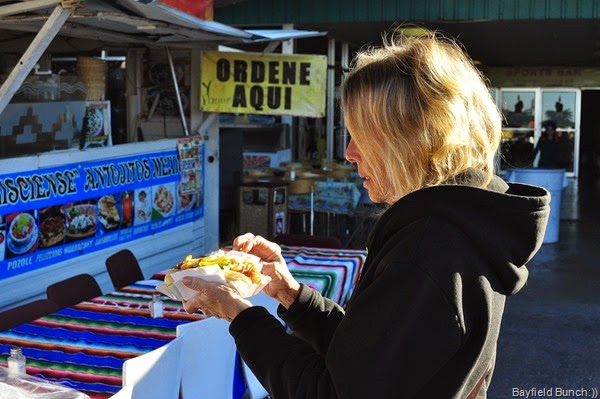 METICULOUS KELLY NEVER EVEN DROPPED SO MUCH AS A CHILE PEPPER 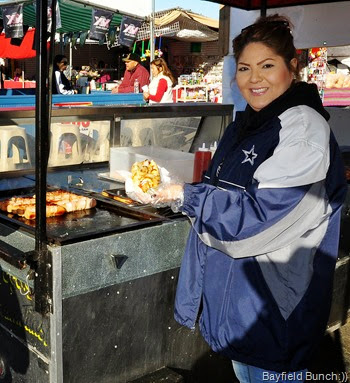 Kelly punched into our GPS the location of Yuma’s second Flea Market about a dozen blocks away called the Arizona Market Place & off we went.  Temperatures were coming up making for a nice sunny day.   This second place was well organized with aisles of vendors having lots of useful RV oriented merchandise.  Reminded me right away of Quartzsite but without all the desert dust blowing around.  Kind of like in the ‘Big Tent’.  We walked all the aisles stopping here & there & making a few purchases.  A water saving shower head, some LED bulbs for the coach & half a dozen other things I have forgotten already.  I would definitely recommend this place if you’re a needin some RV stuff.  Lots of goodies in the Tool Barn.  Clean washrooms, a guy singing country & western tunes in the large food court & by golly somebody selling Tim Horton’s coffee.  Well that’s what the label on the heated carafe said but it certainly was not Tim Hortons coffee.  It was Okay but it was not Timmies!!  While browsing through one of the booths we heard, “are you the Bayfield Bunch?”  A couple had spotted our Jeep in the parking lot & were familiar with my blog.  They had read about us buying our Triple E.  A brief chat & they were on their way.  I think they might have been from Wyoming or Montana.  The fella did tell me, but…… 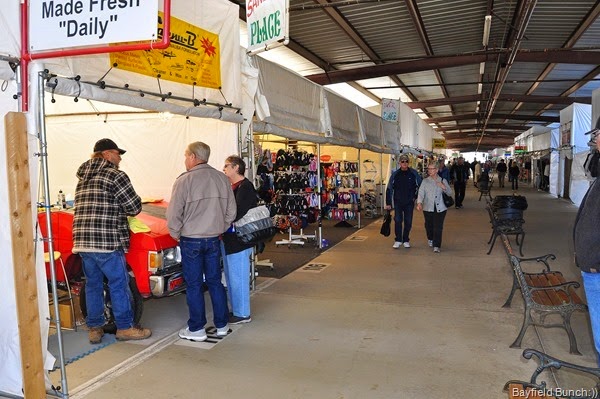 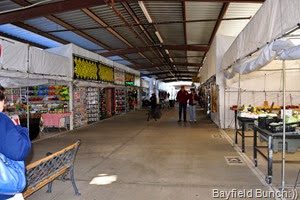 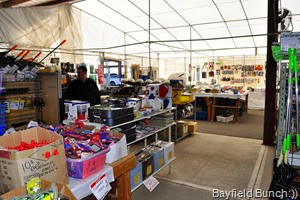 YEP SURE REMINDS ME OF QUARTZSITE ALRIGHT 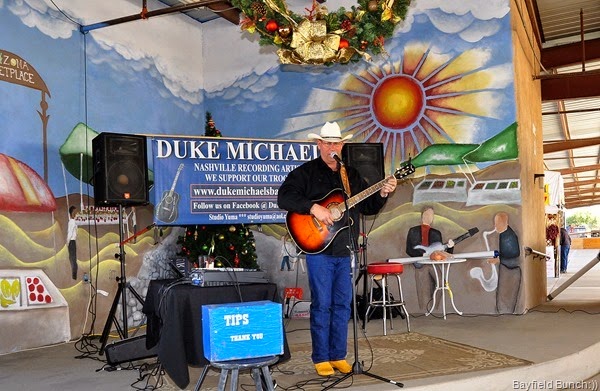 My legs do not do well when in browse/aimless shopping mode.  Walking & dragging along slow looking at stuff is a whole lot harder on my legs than hiking Ghost Mountain or running up & down Coyote Mountain.  Had to sit on a wooden Geezer bench for a bit while Kelly carried on through a few more booths.  Needless to say I was mighty glad to get back to our soft seats in the Jeep!! 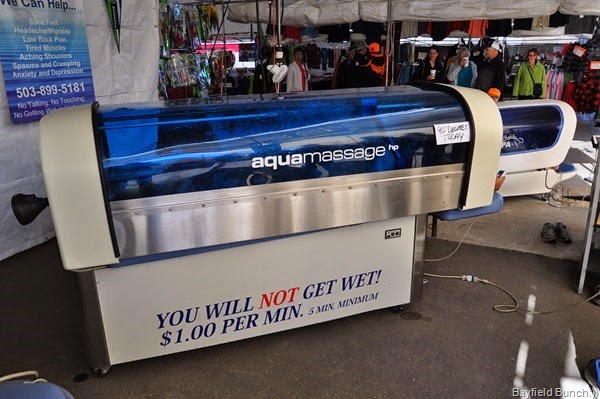 A WATER MASSAGER & YOU DON’T EVEN GET WET INSIDE 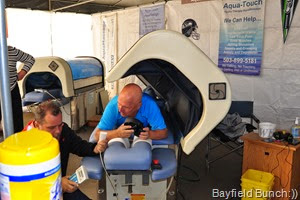 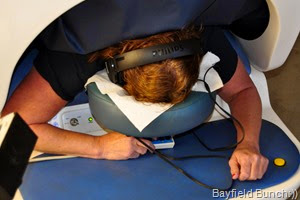 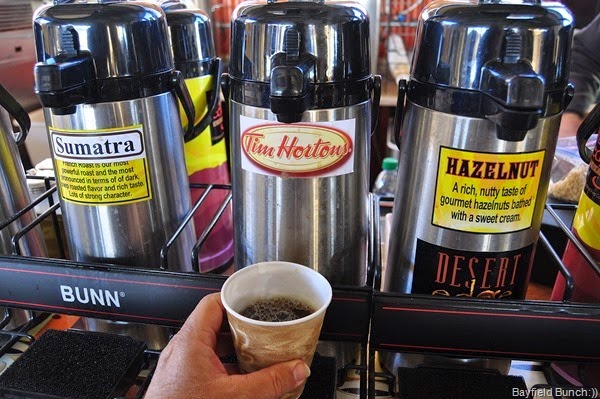 NOPE,  DIDN’T TASTE LIKE OUR SWEET CANADIAN TIMMIES TO ME

Our third stop was an in-town familiar Walmart.  Familiar because we have been there several times before years ago.  There is a McDonalds inside which is memorable to me because that is where we first met at the time fellow RV Bloggers JoAnn & the late Doug Dubrouillet.  Sitting in the far corner booth that morning it was JoAnn & Doug who approached us with the idea of ranch sitting for friends of theirs in McNeil Arizona.  JoAnn asked, “is that something you would be interested in??  Darn tootin we would & the rest of course is Bayfield Bunch history. 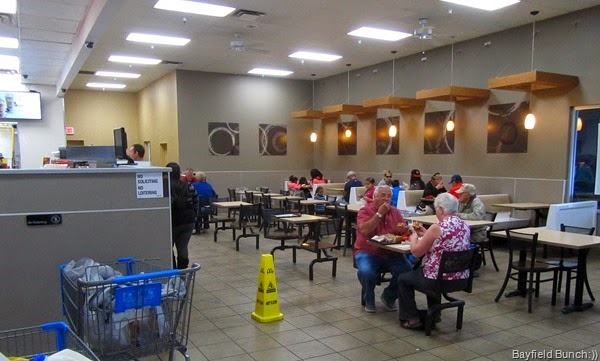 IT WAS IN THE BOOTH UNDER THE FAR LIGHT  WE FIRST MET DOUG & JOANN:))

From Walmart it was right back out into the desert to our rig & the fabulous Pheebs.  We never have to worry about her but we do anyway so we’re always anxious to get home after we have been away for a few hours.  Warm enough this afternoon to sit out for awhile & being able to be comfortably outside is always icing on the cake for anyone down south dodging northern winters.  We should be around 70 soon & for me personally that is my favorite temperature.  Below 65 & anything over 80 just does not work for me & especially if it has any kind of humidity with it. 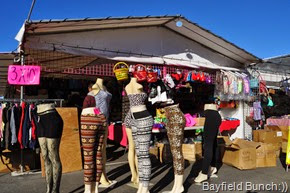 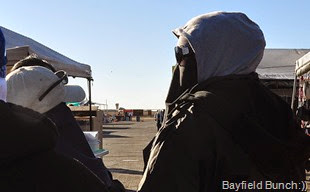 Between the Arizona Market Place & Walmart is the large Yuma United States Marine Corps Airbase so I swung the Jeep down past the base in hopes of seeing some active aircraft but no luck.  Couldn’t even so much as see a runway.  We did see a sign further on for a place called The Peanut Patch about a mile east of the airbase so we drove ourselves on down there to see if I could find myself some real peanut butter.  I much prefer natural peanut butter instead of the salty supermarket stuff.  I was in luck & got me a 2 pound tub of the good stuff:)) 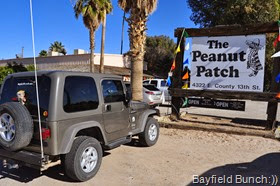 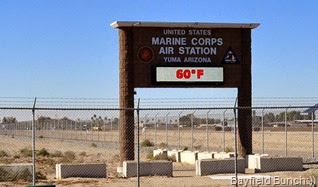