Leslie & Peter had never been to Wickenburg’s Desert Caballeros Western Museum but Kelly & I toured through there  a couple years ago so while Peter & Leslie headed off to see that Kelly & I headed out north of Congress on Date Creek Road to have a look at some property for sale.  Just curious plus it was something to do besides just sitting around the house.  Ever since we began RVing we have always been in the habit of looking at interesting pieces of properties for sale whether they be here in the southwest or back home in southern Ontario.  Like to keep our options energized:)) 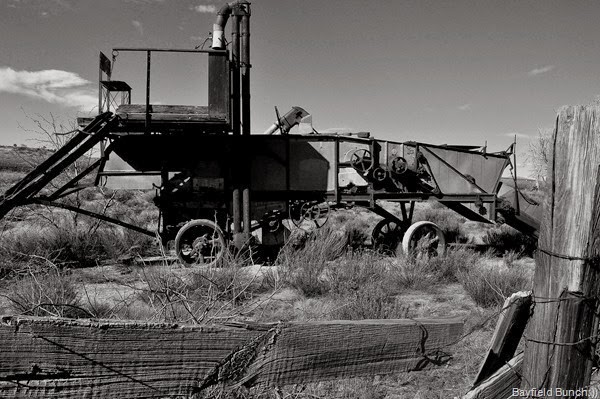 A gusting north wind sucked out what little warmth old Sol was able to squeak through our patchy cloud cover as we strapped on Jeepers & headed on out our gate about 10:30.  Pheebs too.  We were not too optimistic about where this piece of property was located.  Ten miles up Date Creek Road & I remembered that washboardy stretch between Congress & Hillside as the worst case of washboarding I had ever driven on.  Well, it was every bit as bad this morning as it was 2 years ago as we rattled & banged our way along about 20 mph.  Skies were quickly clearing & had it not been for the nice scenery we would have turned around & headed back.  As it was we did go the full 10 miles & located the advertised piece of property with nothing much better than a cow path leading into it.  Ventured aways in before turning around.  By that time I figured they should be giving the property away instead of trying to sell it.  But no matter, it was just nice to get out again into Arizona’s fresh crisp morning air for a drive.  We were back home before 1 & it took us about another hour to stitch our disjointed & thoroughly washboarded shaken bones back together.

A LONE TRAIN IN THE DESERT

My music of choice today came from my 1940’s & 50’s collection of tunes.  It is this era which brings back my boyhood growing up years & is mainly filled with pleasant memories despite some difficult home times.  I grew up in a household of adults.  My Mother, step-Father, Grandfather, & Uncle.  No brothers or sisters.  Just me hangin out by myself with a few good neighborhood chums thrown in for good measure.  Wasn’t until about my mid to late teens when things began to fall apart as my boyhood days rapidly drifted into obscurity.  It is music from the 40’s & 50’s which never fails to take me back to a time oh so long ago when I seemed to live in such a different world.  A world far removed from the world we live in today.  I was one of the fortunate ones along with millions of others my age to have grown up in a time I can still look back on with so many fond memories…………. 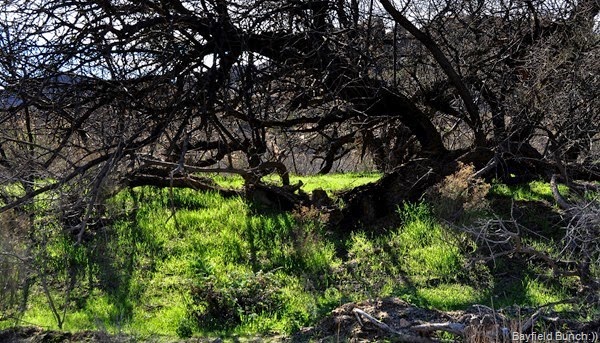 I was off to a fine start with my latest book, A Party Of One.  First few chapters held a lot of enlightening ‘Aha’ moments for me but it was not long before the book in my opinion took a bit of a turn.  Found myself sidetracked into alleys of seemingly ‘off track’ confusion.  Not that it doesn’t take much to confuse me but at times I am feeling the author slides into unnecessary rants referring to the majority of society’s extraverted population as ‘the Mob.’  I do have an understanding what she is trying to get at but feel it could have been got at in a better way.  I am coming across helpful understandings in the book & will see it through though.  Here’s a couple things she said said I understood only to well….. 1. Being friends with a loner requires patience & the wisdom that distance does not mean dislike.  2. In referring to her best friend the author writes, ‘Even so, I do not seize the phone & call her, or anyone, when I feel miserable.  This is one of those acid tests that separates the true loner from the person who I alone would much rather not be:  even in the gloomiest gloom, it is not my instinct to talk it over.  Not that I am sufficiently brilliant as to console myself every time.  It more of a wallow.  But instinct is instinct.

And another reminder from Just Wanderin about Blogger-Fest this coming Saturday north of Quartzsite.  Directions & times can be found on their site.

For supper tonight we decided to head ourselves on down to the recently opened Main Street Café eatery located at the old Congress Depot now known at the Rosebrook.  Same place Kelly attended a fashion show a bunch of weeks back.  Had ourselves some big homemade burgs which were great.  Not sure what Kelly had but it was all green & cheesy & looked like Mexican fare or something.  A single large Raspberry Creamcheese Croissant was fought over with each of us managing to grab a small delicious piece.  Good food all way round with very reasonable prices.  Saw some scrumchous looking apple & peach homemade pies as well too.  Owners Judy & Jerry have really been working hard at turning this into quite a show place.  Definitely worth stopping in to see what’s going on.  And there is a lot going on:)) 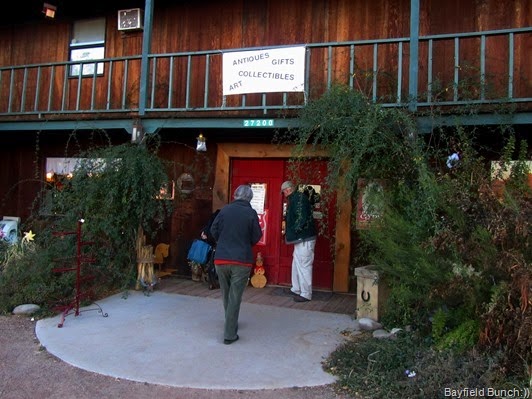 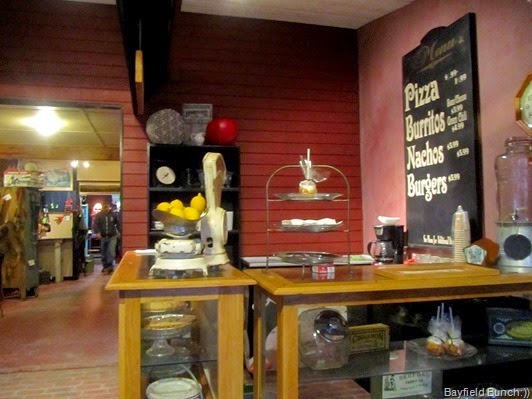 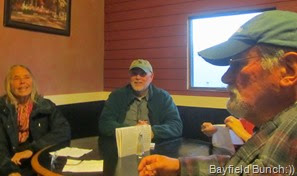 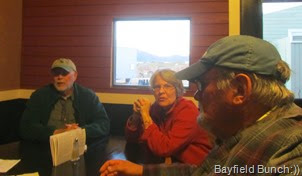 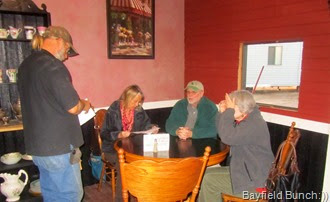 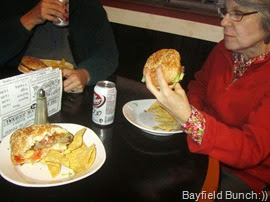 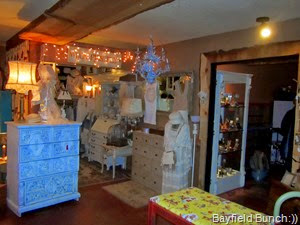 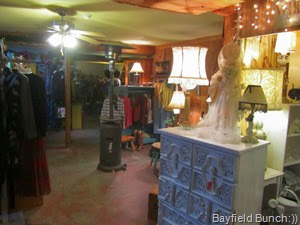 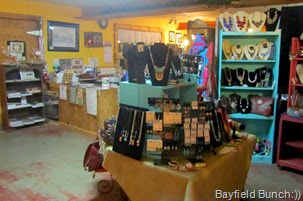 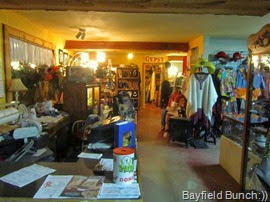 Had us an exceptionally nice sunset Tuesday night.  Our back yard isn’t the best place for sunsets with power poles, Mesquite trees, & electrical wires running interference with heavenly skies but I did manage to selectively take a few photos anyway.  In Bayfield back home we never see sunrises & sunsets because it’s a Pine forest we live in so it is always something we look forward to coming here to Arizona’s big skies:)) 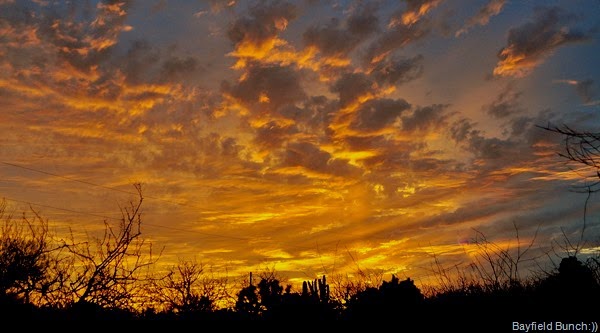 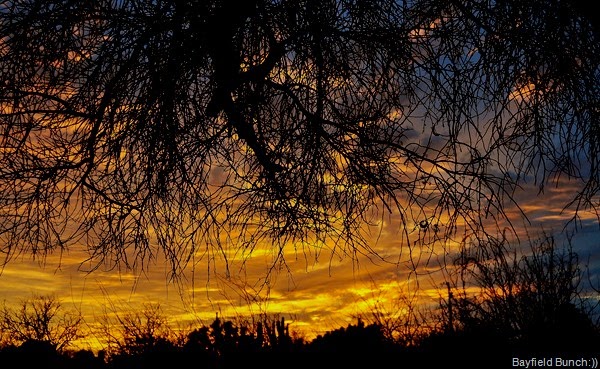 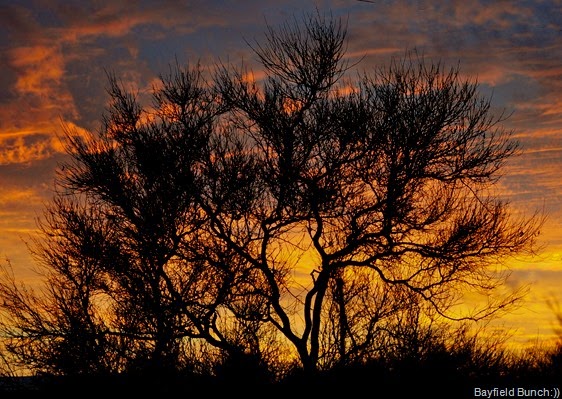 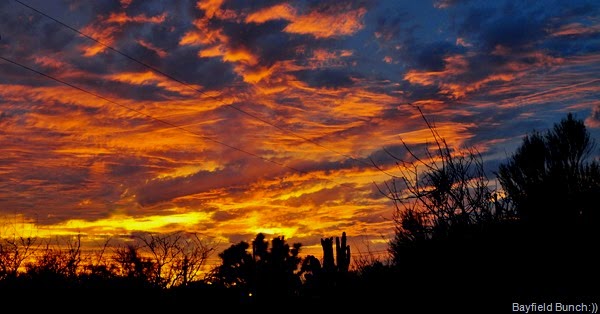 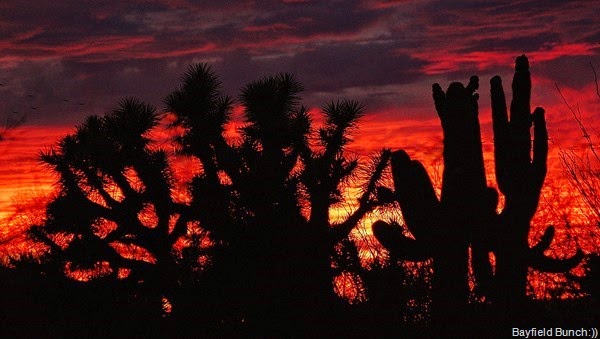 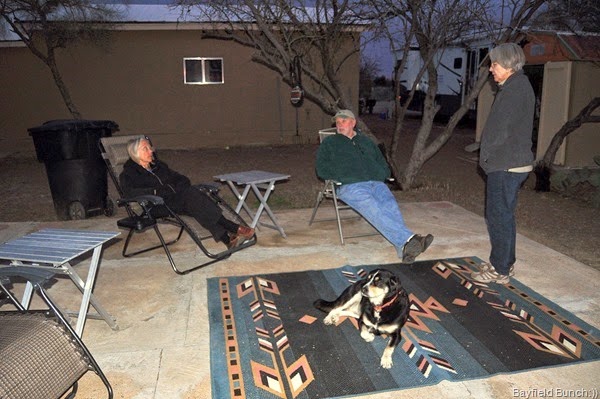 GROANER’S CORNER:((  Dad is from the old school, where you keep your money under the mattress.  Only he kept his in the underwear drawer. One day I bought my dad an unusual personal safe.  A can of spray paint with a false bottom so he could keep his money in the workshop. Later I asked Mom if he was using it.  "Oh, yes," she replied, "he put his money in it the same day."
"No burglar would think to look on the work shelf!" I gloated.  "They won't have to," my mom replied. "He keeps the paint can in his underwear drawer."