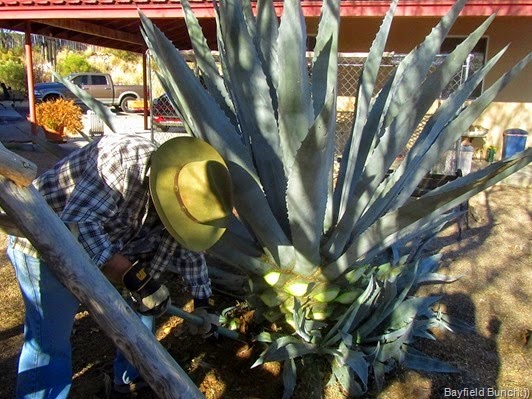 GETTING UP CLOSE & PERSONAL WITH A LARGE AGAVE PLANT THIS MORNING…ONE WRONG MOVE WITH THESE DAGGER TIPPED PLANTS & ONE IS EASILY SKEWERED…IN FACT BY THE TIME WE WERE DONE DA SARGE WAS DEFINITELY LOOKING A LITTLE SKEWERED ALRIGHT:((

It turned out to be one of the those pedal to the metal kind of days & we hit the decks a running first thing this morning.  With handyman Les showing up at 7:30 a.m. we were up & had the front gate open early.  Les works very fast & efficiently & within an hour he had our living room/dining room door frame looking good again as well as an area of ceiling repaired.  He’ll be back in a couple days to finish a final few things up.  When he pulled in he had a load of broken concrete & small sections of a brick wall in his trailer for disposal.  I unloaded the sections of brick for him because I figured we could use them for something somewhere on the property.  About 3 wheelbarrow loads I took off his hands for him. 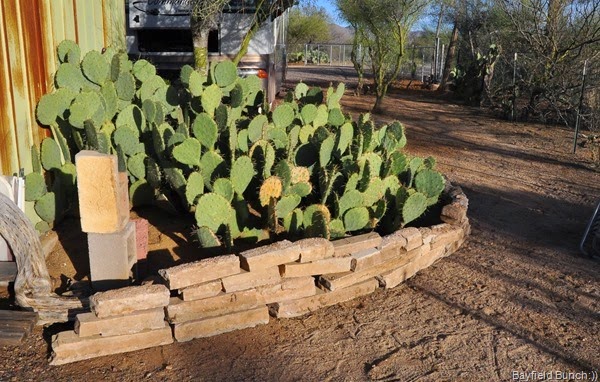 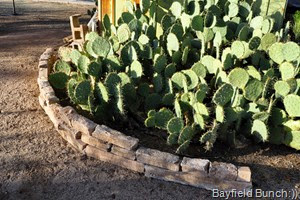 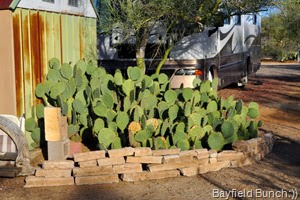 After unloading the small bricks I had myself some momentum going so hooking up the utility trailer Kelly & I headed over to North Ranch stopping at Renee & Dave’s place to begin loading up a bunch of larger 7.5 x 15.5 solid heavy cement/adobe bricks.  Renee & Dave recently bought a place in North Ranch & had a small brick L-shaped wall in front of a utility shed they wanted removed.  Fortunately the bricks were not mortared in place & were easily movable.  Over the course of a few hours & 5 trips with the Jeep & utility trailer Kelly & I managed to transport about 106 bricks back to our place.  Could only take about 30 at a time because of the weight.  Renee & Dave helped load them up & I unloaded them back home in our front yard.  In over 3 months I had not been to North Ranch once & today I was in & out of there 5 times. 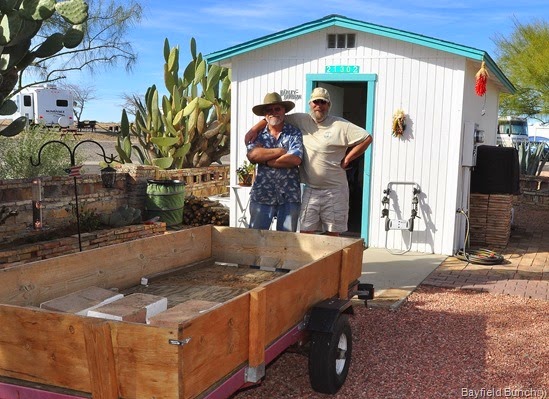 DAVE & I POSE WITH THE LAST LOAD OF BRICKS…I’M THE SHORT GUY WITH THE HAT TOO BIG FOR HIM….Photo by Kelly 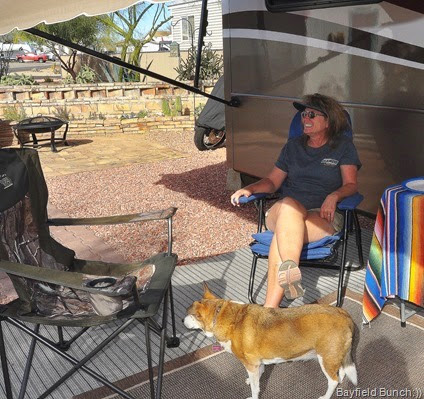 Now mixed in with moving all those big bricks Kelly & I also stopped into John & Jackie's (Sarge) place just up the highway from North Ranch a few miles & dug out nearly a dozen small Agave plants.  John, using a reciprocating saw cut the large leaves off the bottom of the Mother plant & I was able to get some of the younger Agave stocks dug out around the base.  With a heavy load of bricks in the trailer I noticed one of the trailer tires nearly flat so John hooked up his compressor & I pumped it back up.  They also needed to rid themselves of some decorative grass so on our next brick run down the road we were able to make another stop at Sarge’s place to dig some grass out.  Of course I brought clumps of that grass home & managed to get that all re-planted as well. 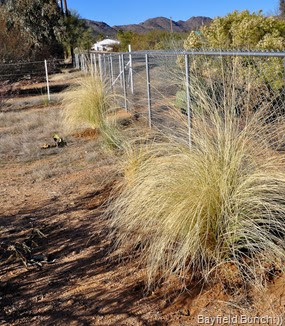 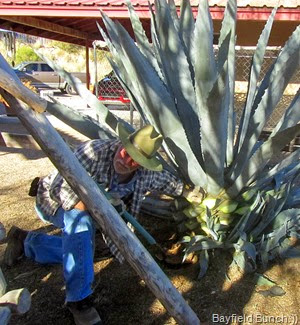 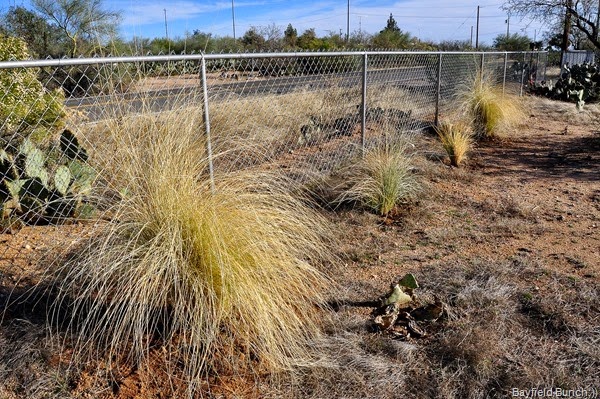 Our temperatures reached 81F today so I had myself A sweat going on but no matter, we just wanted to get those 2 jobs done.  In the morning I will begin planting the the Agave plants.  That is of course if I can even move in the morning.  With each brick weighing in the neighborhood of 35 to 40 pounds I figure we moved well over a ton of bricks today.  I am already stiffened up tonight so I imagine by morning I will be in a totally seized mode.  But no matter because it was just great to get out & get some much needed upper body exercise for a change.  We have no idea what we will do with all these bricks but I’m sure we’ll think of something before too long.  When things are free it’s pretty hard to turn things down:)) 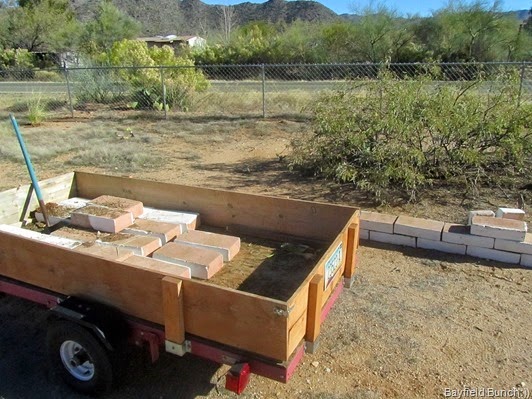 In my Tuesday night post about being 70 I’m afraid I didn’t write myself too clearly about something.  My 70th birthday was actually back in the early part of October so I had a few months to assess my 70th thoughts before writing about them.  Sorry about the confusion but thanks to you folks who wished me a happy birthday anyway.  Your hearts was in the right place:)) 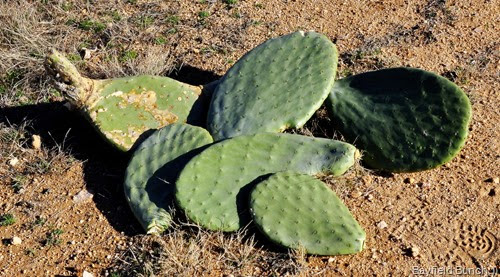 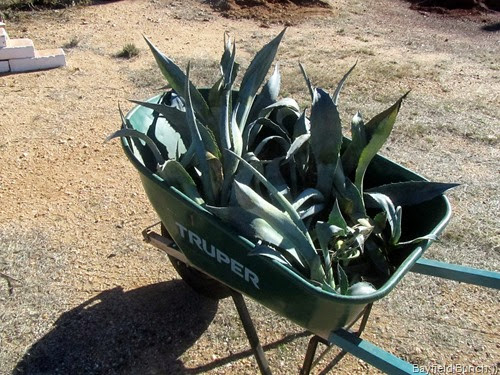 I knew by the 3rd load of bricks I should have stopped today but many of you know what it’s like when you start a project & just can’t stop until it’s finished regardless of how you feel.  Sitting here typing this tonight I am so tired I could easily doze off at my keyboard.  That has actually happened to me a few times.  But it’s a good tired & a good tired is always, well…………just a good tired:)) 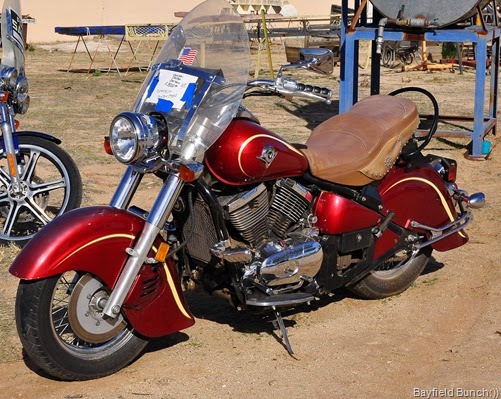 GROANER’S CORNER:(( They were looking down into the depths of the Grand Canyon. "Do you know," asked the guide, "that it took millions and millions of years for this great abyss to be carved out?"  "Well, I'll be darned," exclaimed the traveler. "I never knew this was a government job."