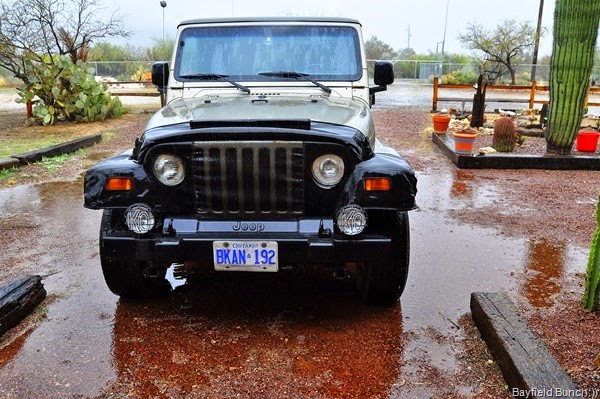 Looking out our door first thing this morning I said to Kelly, ‘Well we might just as well just stay in our jammies all day’.  Rain had began Thursday evening & continued through the night.  We had a small stream running through our back yard right up till about noon when the rains finally stopped.  By evening I was heartened to see some clearing on the western horizon.  Hill tops & mountains around Congress & to the east were still cloaked in fog though. 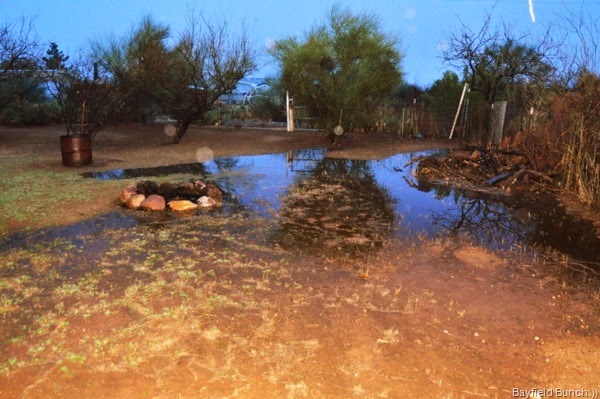 ABOUT 7:30 THIS MORNING IN OUR BACK YARD 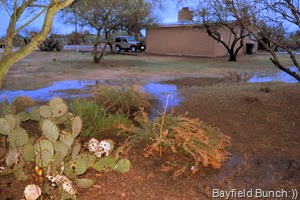 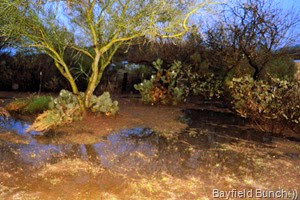 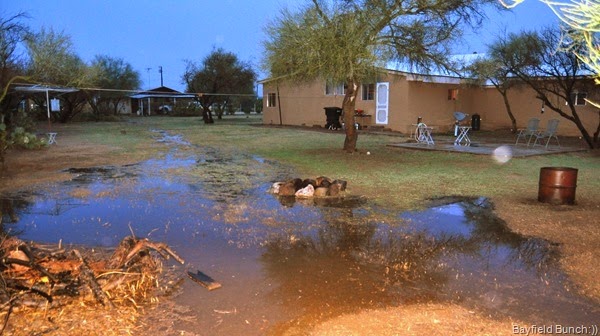 Pheebs wouldn’t even go off the porch.  Lights were on in our neighbor’s work shop so figured he was probably in there hastily building himself a boat.  Still a bit dark out when the rains let up enough for me to zip outside for a few water pics.  Had to be quick because water on the ground here in the desert does not pool for long & drains away quickly. 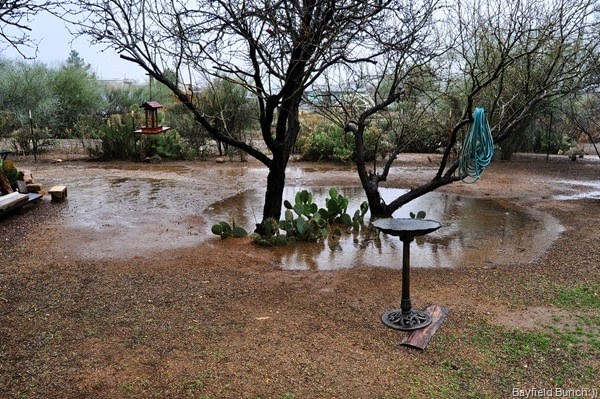 Thought Marianne from frugal-rv-travel. com had a good over-all assessment regarding the phenomena of Quartzsite Arizona.  Aside from all the razzle-dazzle we normally associate with the Q every January there is probably an even bigger reason for RV’ers making their annual pilgrimage to the small dusty desert town out there in the middle of just about anywhere.  I think Marianne got it right. 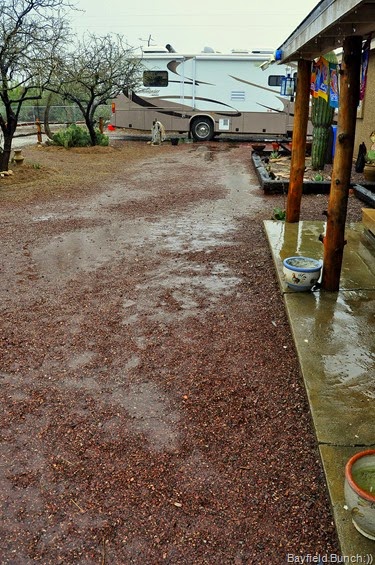 Do you ever find the hardest part of doing anything sometimes is just making up your mind to do it?  I’m kind of like that when it comes to attending any social gatherings or going anywhere I’m really not fond of going.  If I’m asked to go somewhere or do something my first inclination is to say no.  Right away my mind comes up with about 3 good reasons & a 176 in-excusable excuses not to do something or go somewhere.  Happens to me all the time & that side of me usually has it’s way.  But occasionally another part of my personality comes through, kicks my butt out the door & sends me on my way to do something I’m not really wanting to do.  Blogger-Fest 2015 in Quartzsite was a good example of that & it was a good example of what quite often happens when the ‘yes’ side prevails over the ‘no’ side.  Right up until Saturday morning a week ago my yes & no sides were tussling back & forth with my yes side finally winning out & off we went.  And as sometimes happens I really enjoyed my time at Blogger-Fest meeting everyone.  Any monstrous fears I had conjured up before hand quickly dissipated shortly after arriving & despite my usual feelings of nervousness I found myself even speaking up when it was our turn in the group to say who we were.  I had previously said to Kelly, when that speaking up time comes around ‘you’ can do that!!   When I heard our number called my hand shot up & my mouth took off.  Luckily I didn’t embarrass myself with a lot of blabbering.  Believe it or not I have been known to do that on occasion.  Heading back to Congress later that day we both had the same thought & came to the same conclusion, we were both glad we went.  It’s like my very own tag line says at the bottom my posts……….’It is not so much having nothing to do as it is not having the interest to do something’. 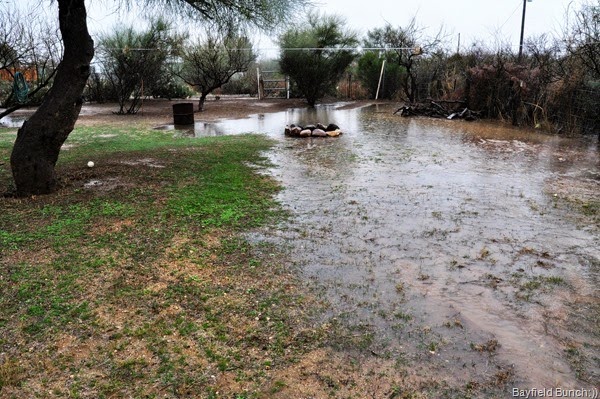 THIS STREAM THROUGH OUR YARD WAS ACTUALLY FLOWING 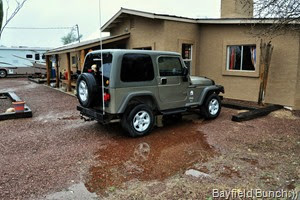 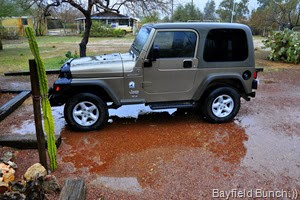 In my January 23rd post I had this thought:  “I sometimes wonder about fellow RV’ers traveling solo & I often wonder what their true thoughts are & how they really feel about that”.   Judy over at Travels With Emma talks about that a bit in her post Some Thoughts About Traveling Solo, And Other Wonderings.  ‘Be sure’ to read all the great comments to Judy’s post & see how a number of other RVing folks feel about that as well.  Some humorous & some very heartfelt. 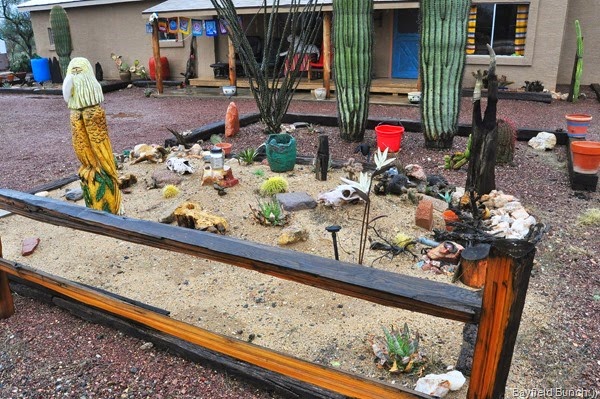 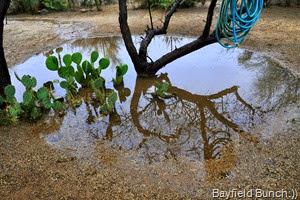 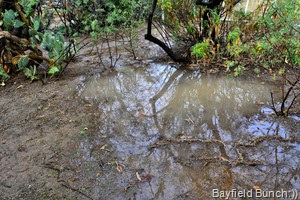 Here’s a good article entitled, The Power Of Positive Purging Your Stuff.  This will be of particular interest to folks planning on selling their house & dealing with all their stuff before setting off down the road on a full time RV adventure. 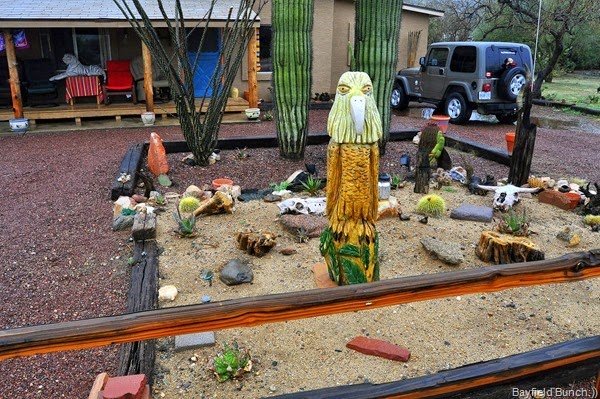 Well it took me awhile but between Google Earth, my California Bench Mark Atlas, the Mojave National Preserve website, & Sue Malone’s post Boondocking Sites & Camping In Mojave National Preserve I finally managed to get an idea of the layout at the Preserve.  Ten day weather forecast for that area has temperature coming up into the 70’s next week with low 80’s by a week from Sunday.  All sunny days of course.  Monitoring the Preserve areas weather I have noticed it mirrors our Congress weather.  Congress likewise is headed for 70 & 80 degree temps by the end of next week. 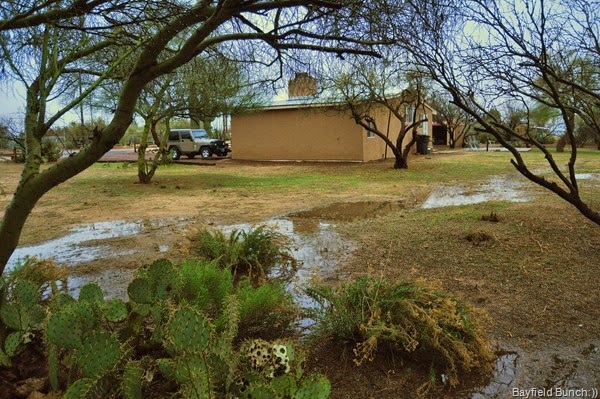 WATER IS RUNNING THROUGH OUR BACK YARD FROM LEFT TO RIGHT

GROANER’S CORNER:((  Two husbands were discussing their married lives. Although happily married, they admitted that there were arguments sometimes. Then the first man said, "I've made one great discovery. I now know how to always have the last word."  "Wow!" said the second, "how did you manage that?"  "It's easy," he replied. "My last word is always 'Yes, Dear.' "