SUN’S OUT, BIRDS ARE SINGING, & AL’S ON THE END OF HIS SHOVEL AGAIN:)) 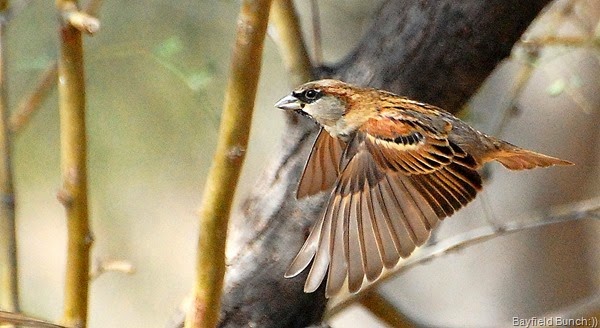 How nice it was to hear our happy neighborhood birds in song again this morning.  No sooner was the welcome Sun over the horizon & the Cactus Wrens were happily singing in the Mesquite trees.  Noticed about a dozen Mourning Doves lined up on a nearby power line warming themselves in the Sun’s rays.  Hauled my gravity lawn chair out of the shed & set it up near our birdfeeder. Stretched myself out for a relaxing half hour of bird photos.  Sometimes I don’t take any photos at all & just enjoy all the humorous activity around the bird feeder. 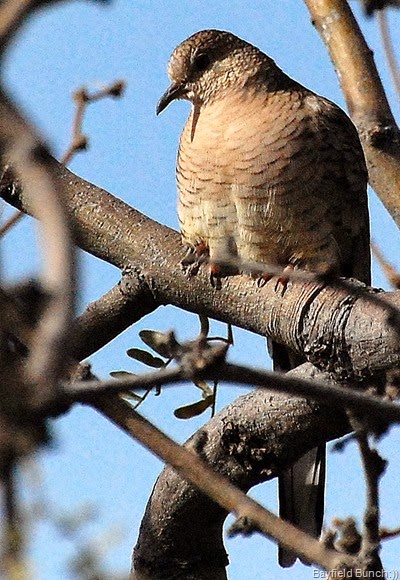 Folks at the optometrist place in Wickenburg where I had my left eye checked Thursday morning recommended a few drops of Joy dish soap mixed with water in a spritzer bottle for cleaning glasses.  Said for people with oily skin & that would be me to add a few drops of alcohol.  Tried that using a soft cloth this morning on my glasses & it worked like a charm.  Also worked well on one of my smeary camera lens filters cleaning it up crystal clear. 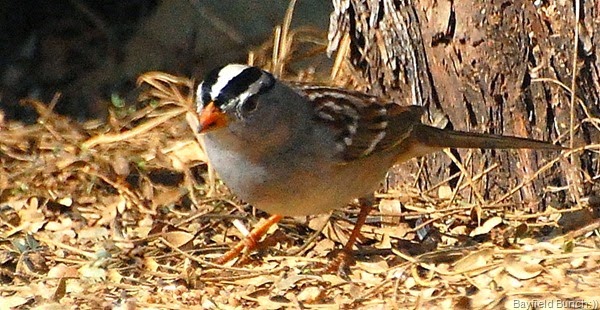 One of Kelly’s favorite browsing stores in Wickenburg was closed Thursday when we were in town so she headed herself back to Wickenburg this morning to see what she could find.  And needless to say she found some things. 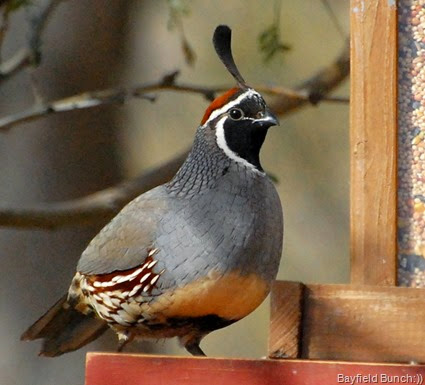 Our skies remained mainly sunny today & despite 37F first thing this morning we were soon up into the 40’s & 50’s with predictions hitting 70F next week.  It was time to get outside & get a happy on which for me meant planting myself on the end of my shovel & cutting in a couple more small cactus beds.  Rule of thumb for me when figuring out where to put a flowerbed is to first see where natural trees & plants are growing then go from there.  Rather than trying to move shrubs into flowerbeds I generally always dig the flower beds in & around existing plants which automatically places them in beds without moving them.  Nature doesn’t normally work in squares or right angle corners so I generally try to keep my flowerbed lines flowing in curves & avoid that squared off look.  By creating a number of flower beds in the same vicinity hard ground random paths naturally occur between them.  Been using that method for years & it seems to work out just fine. 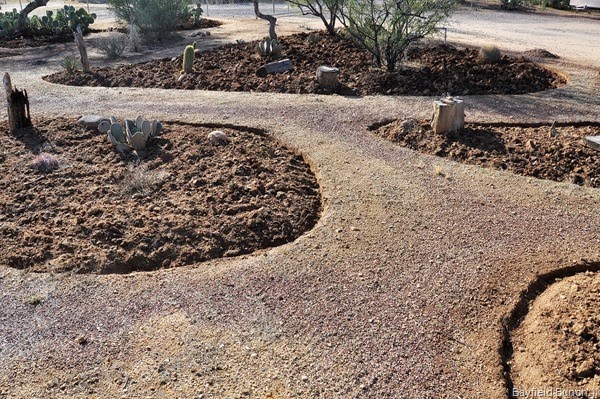 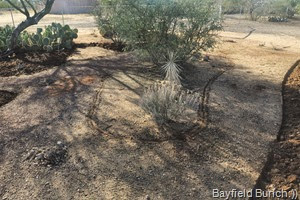 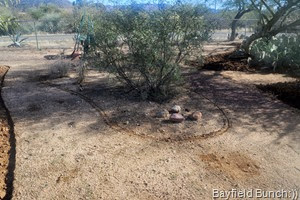 MY DRAGGED SHOVEL MARKS FOR ANOTHER CACTUS BED CIRCLE A MESQUITE SHRUB, A PLANTED JOSHUA TREE & ANOTHER SMALL FLOWERING SHRUB 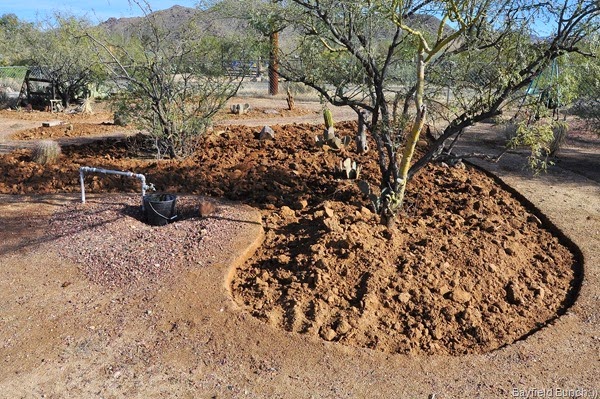 THIS BED ENCLOSES A PALO VERDE TREE, A MESQUITE TREE & A 1 MESQUITE SHRUB 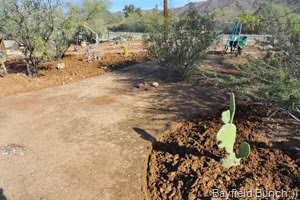 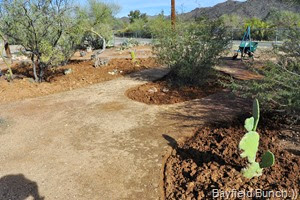 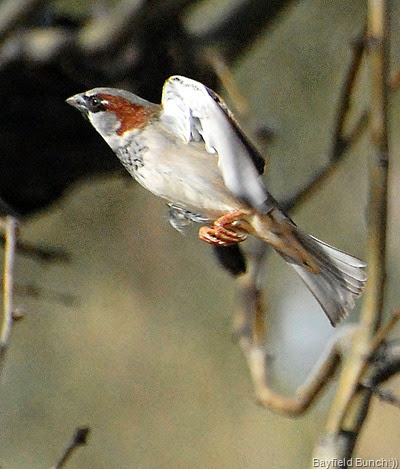 Called Aunt Jean in Sarasota Florida Thursday night to see how she’s doing.  Despite a trip to a pain clinic a few days ago for injections regarding a chronic degenerating lower back disk problem she did manage to make it out to the golf course this past Tuesday & play 18 holes with friends.  Maybe not driving the ball from one end of the golf course to the other anymore but she does the best she can & that’s all that matters.  She has had to shorten her morning walks but still gets out there & gives it her best.  With a severely curved spine pressing on a lung she becomes winded easy now so has had to slow down some & catch her breath frequently.  But like she said, she’s not giving up & will just keep on pushing herself every day to do as much as she can.  That’s my strong willed good old Aunt Jean alright:)) 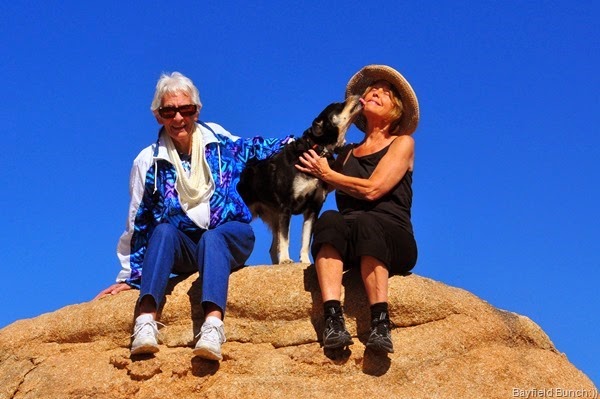 Ever thought about volunteering some of your skills to help others.  That’s just what John is doing over at Just Finding Our Way.  Working with Rebuilding Together John led a team of volunteers building benches for placement around the campus at Unlimited Potential.  We have met John & he truly is a craftsman. 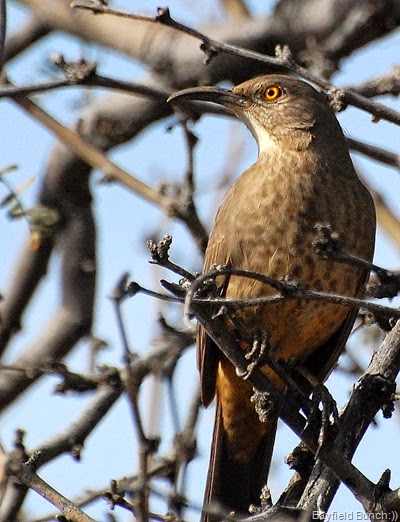 CURVE BILL THRASHER OR ‘CURVY BILL’ AS I CALL HIM >>>

Tossing out old photos or deleting digitals on my computer is a tough thing for me to do.  Always has been but I take heart in the fact that yes it can be done if one can discipline & organize themselves well enough to do it.  Jodee over at On the Road Abode: Trading a zip code for a toad has a well written post entitled, The Power Of Photos in which she writes about her current photo project.  I could pretty much identify with every one of her her thoughts & feelings regarding her old photos & photo albums.  Jodee & husband Bill are working their way forward to becoming full time RV’ers in 2015. 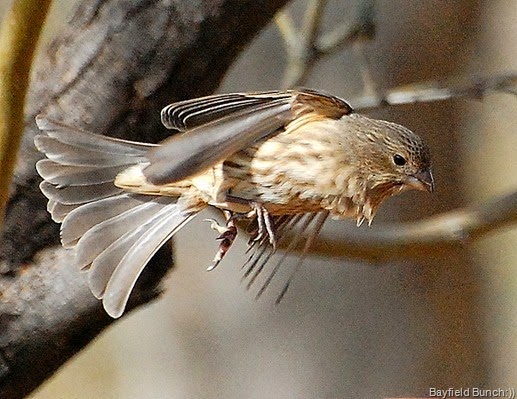 GROANER’S CORNER:(( The doctor in a small western town medical clinic asked the weather-beaten mountaineer how he was feeling.  "Well ... it's like this," drawled the man. "I'm still a-kickin', but I ain't a-raisin' no dust anymore."