AN APPROACHING CALIFORNIA STORM DELAYS OUR TRIP BACK TO SLAB CITY 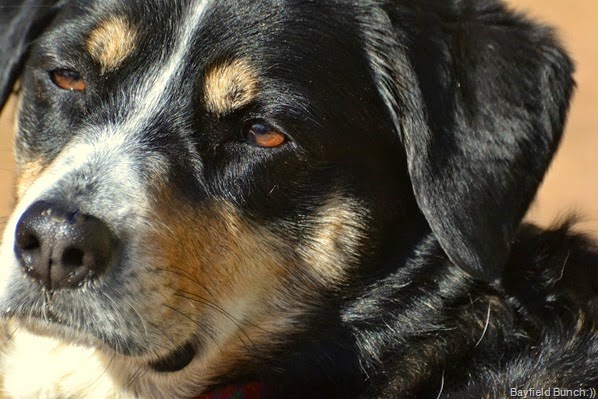 SUCH A TWEETY PIE SHE IS:))

Had a shovel in the ground before the hands on my wrist worn time piece had reached the number 8 this morning.  Air was cool & it was a good time to dig.  Steve had this question for me this morning, “Is it safe to assume that the ground is soft enough there is not a lot of problems digging up that much dirt”.  Yes Steve that was one of the reasons I was out early.  Ground here is still quite pliable since last week’s heavy rains so I have to get these cactus beds dug while the earth is still workably soft.  It will soon be dried out & back to it’s old un-diggable self.

Kelly was up for a walk in the desert this morning so we all piled into the Jeep & off we went.  Probably been 3 weeks since I have been out for a morning walk.  Kelly still goes out most mornings with Pheebs & does a few blocks in the neighborhood.  I’m just not into walking around the neighborhood so unless we head off for a walk in the desert I usually find things to do around the yard while Kelly & Pheebs are out walking.

CAN YOU TELL KELLY IS HAVING BETTER DAYS:)) 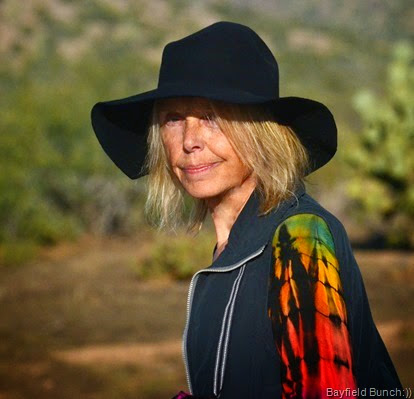 THIS HAT FROM FRANCE WAS GIVEN TO KELLY BY` ACCLAIMED SHAKESPEAREAN ACTRESS PAT GALLOWAY BACK IN THE DAYS WHEN KELLY & I LOOKED AFTER PAT & HER HUSBAND BERNHARD’S ESTATE NEAR ST. MARY’S ONTARIO  >>>

I have picked up Cactus Man 3 different times in the last couple days because he keeps falling over.  Decided this morning to move him from the muddy soft ground he has been standing on for the past couple years & try a different location.  I’m hoping he will like his new spot. 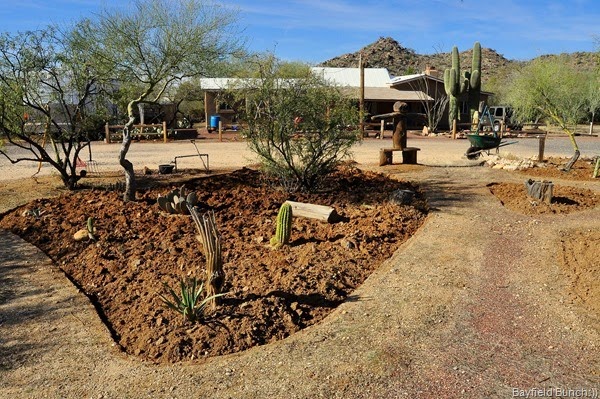 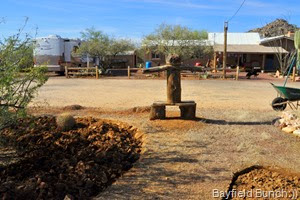 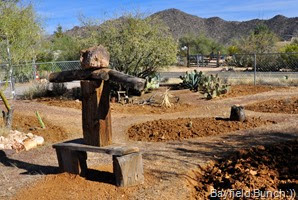 Lady called early this afternoon saying my new glasses were in.  Had she called this morning we would have been off to Wickenburg to pick them up.  Both Kelly & I are morning people much preferring to get things done or going places in the a.m.  Today I tuckered myself out by noon so didn’t feel much like going anywhere & that’s how we both generally feel most days by mid afternoon.  Pretty hard to drag us anywhere after 3 & by 4:30 we’re eating supper already.  Compared to years ago we sure have changed some of our ways & days. 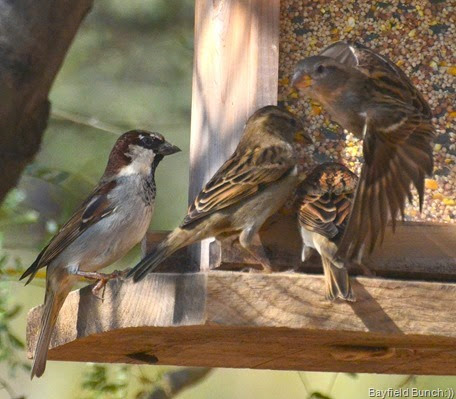 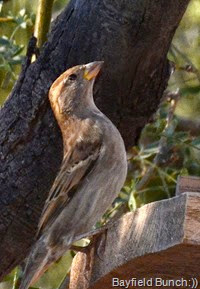 RETIRED ROD  thought maybe our inverter troubles could have been caused by lightning.  He also said FET means Field Effect Transistor.  The board controls the amount of power coming out of the inverter……The folks at Magnum suggested that lightning could have been what fried both boards as well.  Only one problem with that theory.  We never encountered any thunderstorms on our journey.  Everything was working well & we only noticed the inverter problem 2 days after leaving Winkler Manitoba.  We were into lots of wind, cold temperatures & few errant snow flakes but no lightning driven thunderstorms at any time.

Been over a year since Ellie & Jim have had a post up but with their excitement over a recently purchased sticks & bricks at North Ranch they rustled themselves up a Blogger post yesterday.  In Ellie’s words, “it’s a new chapter in their lives”. You can find these nice folks & their new digs here at Justravelin.  I have them on my sidebar again as well.  They hadn’t blogged for so long I had completely lost track of them.  We met Ellie & Jim one time about 4 years ago I think it was. 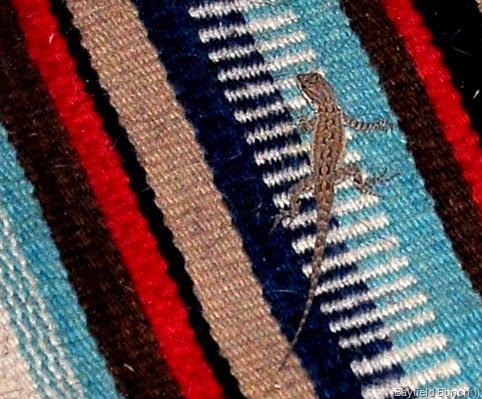 MY LITTLE LIZARD PAL IS STILL HANGING OUT IN MY BEDROOM…Hmmmm WONDER IF THAT’S WHAT I FELT SCRAMBLE ACROSS MY FOREHEAD LAST NIGHT:))

I liked the ghostly apparitions Ivan recently encountered in an Arizona mineshaft near Lake Havasu.  With a flashlight, a camera, & a little creative thinking Ivan was able to coax a few old 49er miners to come forth out of the inky blackness & walk towards him. 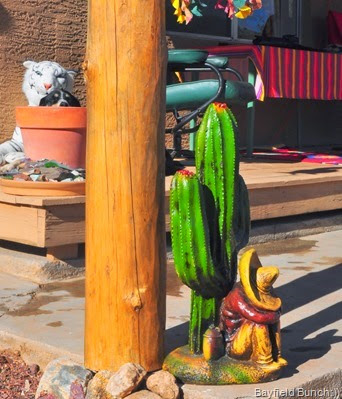 Gaelyn from GEOGYPSY owns a large 5th wheel but wanted something smaller she could also use to travel around in during the winter months.  She recently purchased a used camper which fits into the bed of her Dodge truck.  Known as a truck camper she has been busy getting things ready to head off shortly in search of new desert adventures. 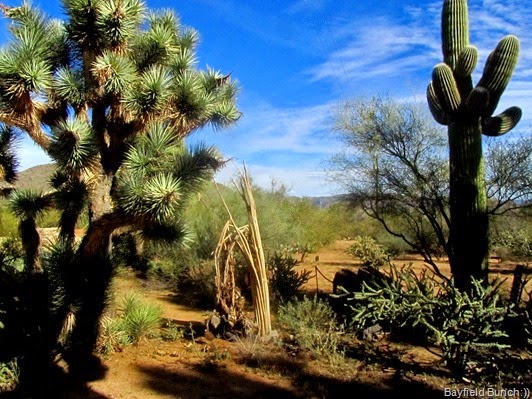 Can you imagine an oil change requiring 28 quarts of oil.  I can’t but I’m sure you diesel driver’s out there know all about that.  Steve & Karen change the oil in their Safari Serengeti diesel pusher Motorhome once a year & they do it themselves.  I can’t imagine that either.  I have trouble just changing socks sometimes.

Temecula Valley RV phoned this morning saying our inverter was shipped to Solar Mike today.  Email from Mike said he could install our repaired inverter Saturday morning so we considered leaving here Friday.  That is until we heard the 5 o’clock news tonight about a storm crashing into the California/Oregon coast & heading our way.  Could be rolling through Slab City in a few days so figured we’d rather ride out a storm here at home rather than in a Motorhome parked somewhere in the desert landscape of Slab City.  Waiting for a return email from Solar Mike to see if he can do the installation possibly next Tuesday morning which would mean we’d leave here Monday.  Maybe even Sunday & spend a night in the Kofa Mountains south of Quartzsite.  We’ll see what happens with the weather in a few days. 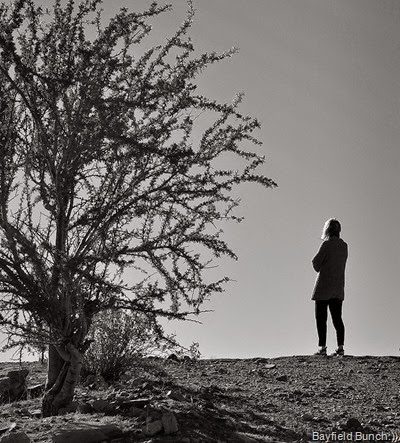 GROANER’S CORNER:((   It was a really hot day at the office due to a malfunction with the air conditioning system. There were about twenty people in close quarters and everyone was sweating, even with a fan on.
All of a sudden, people started to wrinkle their noses at an odor passing through the air. It was the most hideous smell anyone had ever smelled.  One man, popping his head out of his cubicle, said, "Oh, man! Someone's deodorant isn't working."  A man in the corner replied, "It can't be me. I'm not wearing any."