A MYSTERIOUS UFO SIGHTING, OUR INVERTER IS RE-INSTALLED, & WE’RE BACK IN THE KOFA MOUNTAINS

LOOKING SOUTH ALONG THE SALTON SEA SHORELINE EARLY THIS MORNING

It was while my post was publishing Friday night that Kelly happened to look our door’s window & said, “there’s something up in the sky”.  I didn’t react right away until she said it again & I saw her looking up & pointing.  Got up from the dining room table & went over to the door.  Peering out I could see what I at first thought was a puff of cloud but it didn’t make sense because skies had cleared & the night sky was filled with stars.  I opened the door & looked again.  I knew instantly this was not something I had ever seen before.  It was moving slowly over the Salton Sea from north to south.  Maybe a few thousand feet up hard to tell.  What I saw for maybe 4 seconds was a large mass of light in a semi-circle.  Kind of like the letter C with the light shining from the center out through the open part of the C & in the direction the object was traveling.  I also colors in the seemingly projected light with a bright ball of red light in the center.  I turned to Kelly & hollered, “grab my camera” which she did but as I quickly turned back the object had totally vanished from the sky.  I’ve seen airplane landing lights at night & this didn’t look like that.  Also no blinking lights that would also suggest an aircraft & this object emitted no sound.  Now had I been the only one to see this & the fact I’m reading a UFO book at the moment I could understand people scoffing at me but the fact Kelly was the first to see this unidentified object in the night sky removes the scoffs & makes this sighting credible…..whatever it was. 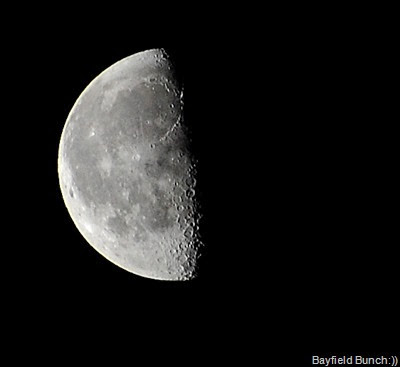 Despite a busy main line double train line about half a mile to the east the rumbling train sounds in the night really didn’t bother us much.  No crossings nearby so no whistle blowing.  When I stepped out of the coach this morning around 5 I could hear the gentle swish of waves lapping on the shore of the Salton See about 500 yards to the west of us.  So nice to again see the long thin chainlike line of lights along the far shoreline.  Salton City lit up like a stretched beacon in the night. 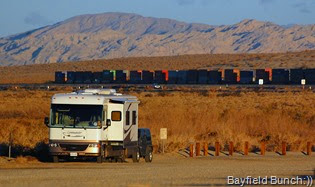 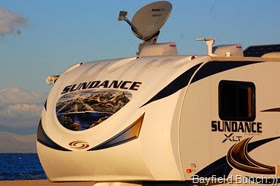 SOUTHBOUND DOWN HIGHWAY 111 HEADING STRAIGHT FOR THE SEA ITSELF

An early morning southbound drive rolled us into Niland around 8:20.  From there we bumped our way a couple miles east out to Slab City & Solar Mike’s.  He was just finishing a morning coffee as we pulled in.  Always a nice fellow to talk to.  Wasn’t long he had our repaired inverter out of it’s shipping box.  Gary, one of Mike’s 2 helpers immediately got to work removing the loaner inverter Mike had put in for us a couple weeks ago.  Didn’t take them long & our inverter was back in the coach up & running.  Mike spent some time with us going over the inverter’s remote control panel & he made sure all the settings were correct.  A final check & all systems were go.  We settled up with Mike, had ourselves a wee chat, & we were on our way.  If nothing goes wrong with our solar set-up between now & eternity this just may very well have been our last trip to Slab City.  Kinda sad in a way because we have had some good memories there over the years………. 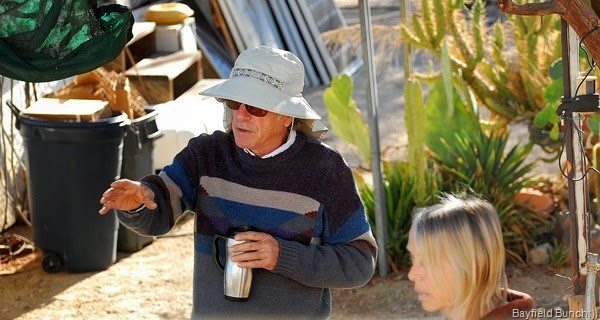 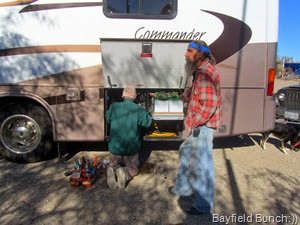 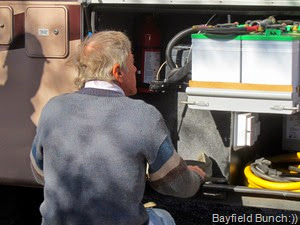 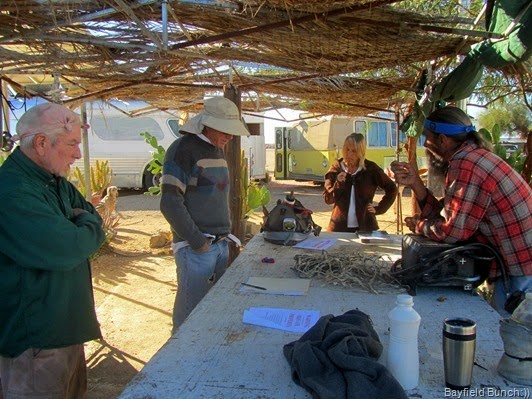 Heading back into Niland we still hadn’t decided where we wanted to go next.  Not unusual for us.  I was leaning towards heading on to Borrego Springs & Kelly was leaning towards heading back towards the Kofa Mountains south of Quartzsite.  We finally reached a compromise.  We turned right onto highway 111 in Niland & headed for Arizona’s Kofa Mountains.  Rather than just spend 3 days in Borrego we figured it would be better to come back in possibly late January or February when we can spend more time in one of our favorite areas.  Besides it’s been well over a year since I’ve made my annual trek up Ghost Mountain.

It was a nice day with big puffy white clouds in a deep blue western sky.  We retraced the previous day’s journey north to the little Mexican flavored town of Mecca whereupon we hung a right & headed back through Box Canyon.  Wasn’t long & we could see white objects moving in a single line across the distant landscape.  Trucks on Interstate 10 far off to our left.  Box Canyon Road & I-10 run parallel for quite way before slowly merging at the interchange to Joshua Tree National Park.  It was here we once again climbed aboard I-10 only this time heading east.

HEADING BACK THROUGH BOX CANYON 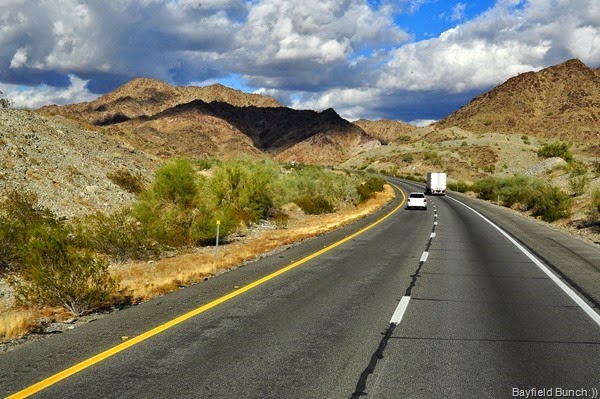 An hour & something later we were in Quartzsite, picked up some fuel & headed south out of town down highway 95.  Oh how I have always loved the looks of those jagged Kofa Mountains right from the first time we ever saw them back in early 2007 I think it was.   After our time spent exploring around them last winter they now hold a special place in my heart.  We made us some great memories bumping our way through & around those mountains late last December & again in February I think it might have been. 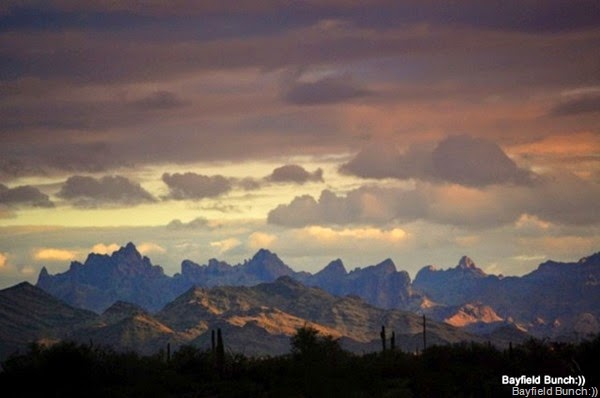 ONE OF MY KOFA MOUNTAIN FILE PHOTOS…WE HAVE ACTUALLY JEEPED OUR WAY AROUND, THROUGH, & TO THE OTHER SIDE OF THOSE MAJESTIC PEAKS

Roads were rough & washboardy coming in off the highway.  The roads seem worse this year than last.  We were surprised not to find anyone around anywhere.  Figured we would at least see half a dozen rigs scattered about but nothing.  I think we are the only ones camped out tonight in the Kofa Mountains.  Of course that suits us just fine & we will enjoy our quiet solitude nestled up against the mountains just fine.

OUR SPOT FOR THE NIGHT & WE’RE THE ONLY ONES HERE…NOW HOW NICE IS THAT EH:)) 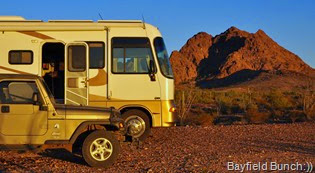 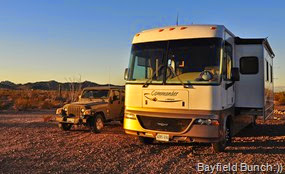 THE YELLOWISH ORANGE TINGE IS FROM THE LATE AFTERNOON SUN

Happy hearts over at Karen & Steve's place with the arrival of a new little cutie patootie fur ball.  A great companion for Finney & this little fellow just might even end up with the name Binney.  Always so nice when folks are able to reach out & help give a poor little animal a good home.

Pheebs & stepped out into the inky black blackness tonight around 8.  So dark I could barely see my hand in front of my face.  Brilliant stars from mountain top to mountain top.  A glow on the southwestern horizon showed me in which direction Yuma was hiding.  Quartzsite was a much fainter smudge to the north.  And a very faint glow low in the east can only be the far distant lights of the great megapollis known as Phoenix. 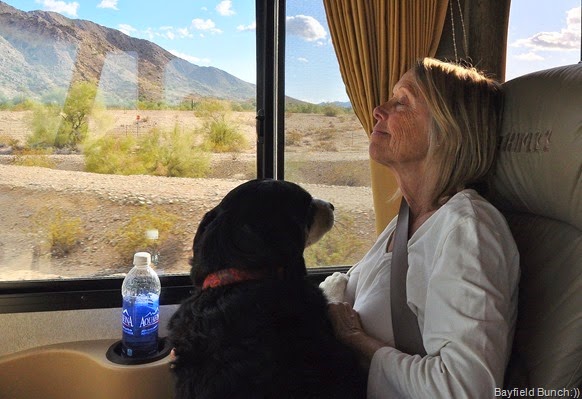 CRUISING ALONG JUST ENJOY THE DAY

And to add one more thing to our unusual sighting last night over the Salton Sea……At Solar Mike’s today while I was telling a fella about our sighting Friday night Gary, the fellow installing our inverter suddenly turned around & said, “Hey I saw that too”.  Gary had been outside his rig when he spotted the strange object slightly west of his location moving in a slow southerly direction.  Seeing it the same time we did he watched it for about 30 seconds saying it was the strangest thing he ever saw.  His description of it was the same as mine.  He said all of a sudden it just up & disappeared & that was it.  So that’s 3 of us who saw it now.  Strange happenings out here the night skies!! 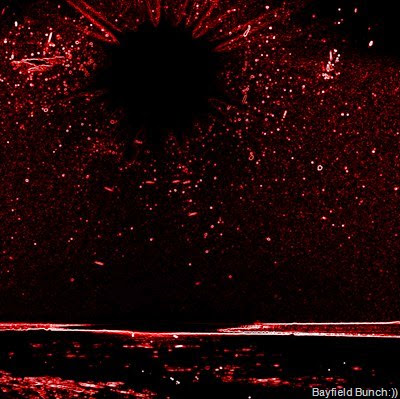 GROANER’S CORNER:(( A man wrote a letter to a small hotel in a Midwest town he planned to visit on his vacation. He wrote:  I would very much like to bring my dog with me. He is well-groomed and very well behaved. Would you be willing to permit me to keep him in my room with me at night?  An immediate reply came from the hotel owner, who said, "I've been operating this hotel for many years. In all that time, I've never had a dog steal towels, bedclothes, silverware or pictures off the walls. I've never had to evict a dog in the middle of the night for being drunk and disorderly. And I've never had a dog run out on a hotel bill. Yes, indeed, your dog is welcome at my hotel. And, if your dog will vouch for you, you're welcome to stay here, too.